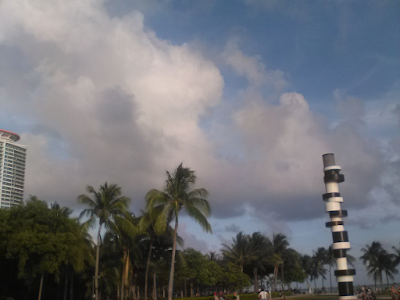 South Pointe Park along the Government Cut, Miami Beach, Fla., 7:05 p.m., June 7, 2021
The weird-looking sculpture in the grassy area is called the Lighthouse Sculpture. About 55 feet in height, it was created by German artist Tobias Rehberger in 2011. Here is another view of it: 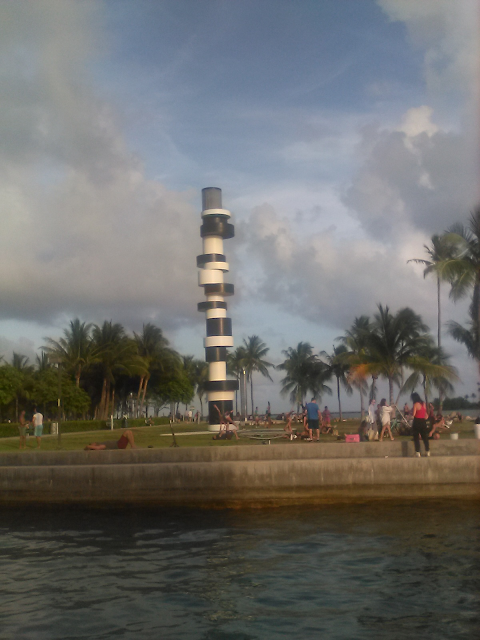 Well, here is the Friday entry that on Monday I indicated I would try to write, and I have managed to do so.
I'm home watching one of two episodes ("The Fregosi Emerald" and "Zombo") of The Munsters on Cozi-TV. I really love The Munsters.
So, I managed to get through a work-wise busy week while living down here doubly alone in this strange, picture postcard tropical seaside world of Miami Beach. 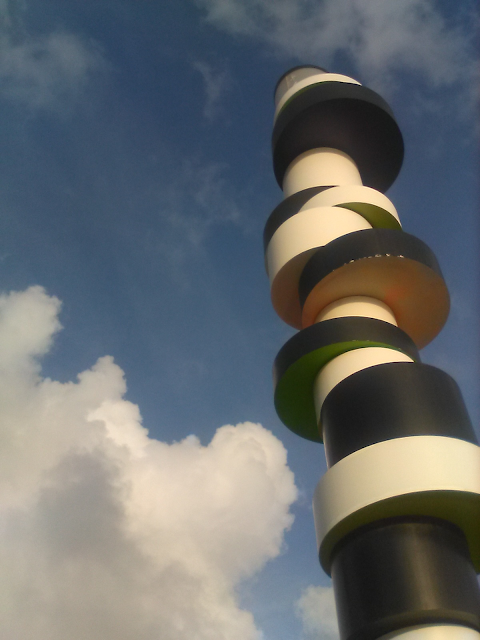 Close-up of the Lighthouse Sculpture with backdrop of the evening sky, Miami Beach, Fla., 7:08 p.m., June 7, 2021
The artist's vision, I guess, was to feature a lighthouse built as a series of uneven stacked dishes all ready to topple over.
*******
I'm very busy on two major projects, a third large long-running one, and a monthly recurring one.
While freshly shaven, shorn, showered, and dressed, I'm not feeling well right now. Once again, I have a sort of migraine headache. Actually, I'm starting to worry I might just drop dead of a brain aneurysm. 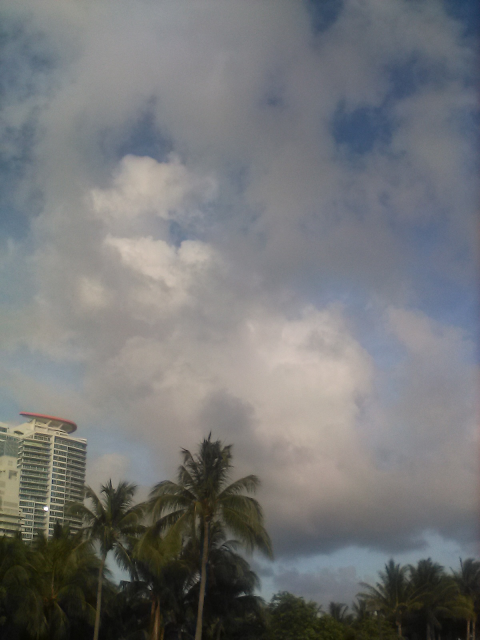 My main worry continues to be that I don't want to die before my father passes away. (It's irrelevant with my mother.)
I just took two Sumatriptan and a big Ibuprofen. 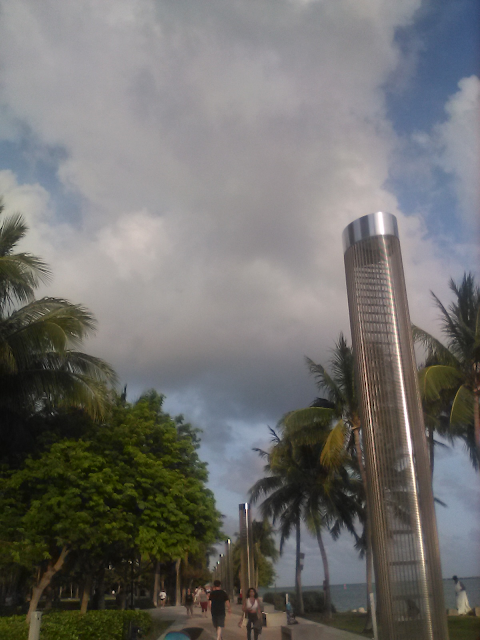 For tonight, I have no plans. I guess I could go South Pointe Tavern ... Or the lobby at The Betsy ... or maybe something along the Lincoln Road pedestrian mall areas ... or even Nathan's, nearby gay bar I discoverd last weekend when Gary was here.
At minimum, I need to get dinner. I'm quite hungry and, as usual, I have no meaningful food in the house. That's $120 right off the bat. 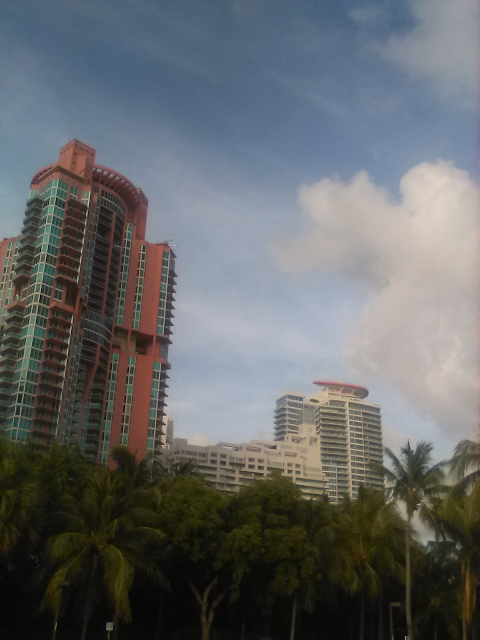 It continues to be too dry. Somehow, I managed to move to the Miami area in time for one of its drier Junes. Meanwhile, back in the D.C. area -- I was going to say "back home," but that place was never home, just a place I lived far too long -- it has been very rainy with nearly 3" of rain at KDCA in the past 72 hours, although less in the Baltimore area (a little over 1" at KBWI). Well, June can be that way back there.
While there are widely scattered thunderstorms each day around South Florida, there just hasn't been any meaningful rainfall basically since I moved here in mid-March (and prior to that). There is much talk of pattern changes to allow for more widespread thunderstorms, but so far, nothing. 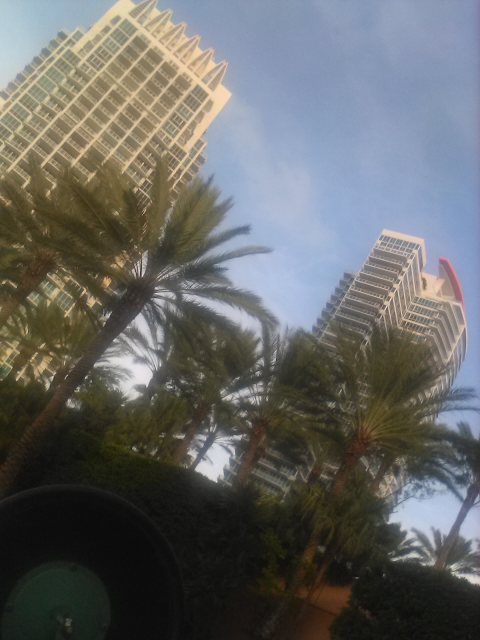 For the weekend, no plans except to go to the beach and go in the ocean down in the South Pointe area at the very bottom of Miami Beach.
Hopefully, the outdoor "Entertainment District" won't erupt into its usual hip hop-infused, pot-smoke-and-twerking, Carnival shitfest. Each weekend since mid-March has featured a bit less of the malevolent lunacy and all-purpose hateful depravity that is mindless American culture. 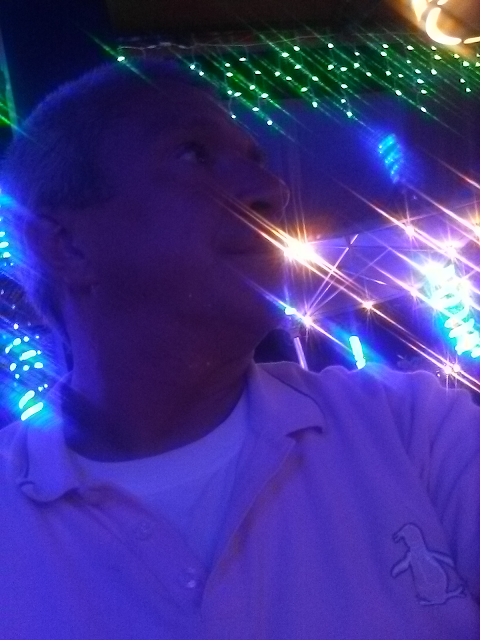 OK, I'm signing off for now. No political commentary for this entry.
--Regulus
Posted by Regulus at 8:37 PM