The Coconut Palm at the End of the World (Well, At Least Miami Beach) -OR- Frickin' Evil Devil Sargassum In Monstrous Infinity 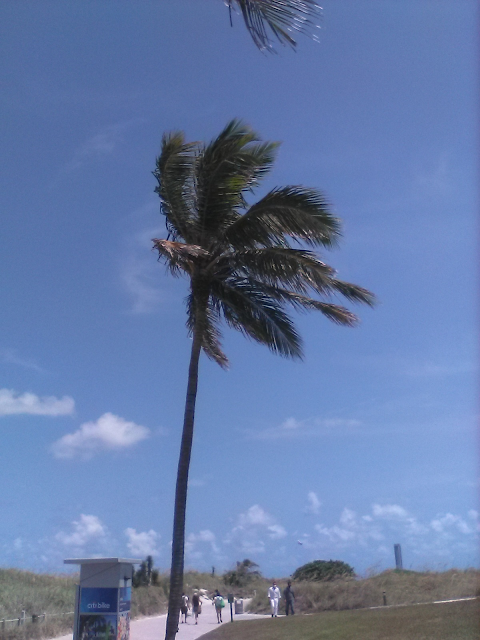 The coconut palm located closest to the South Point Park Pier at the very southern / southeasternmost point of Miami Beach, Fla., 2:35 p.m., May 26, 2021
Because of how this palm notably appears in the distance looking down the beach -- as the most southerly / easterly and hence "last" one -- suggests (to me) the Coconut Palm At The End of the World. 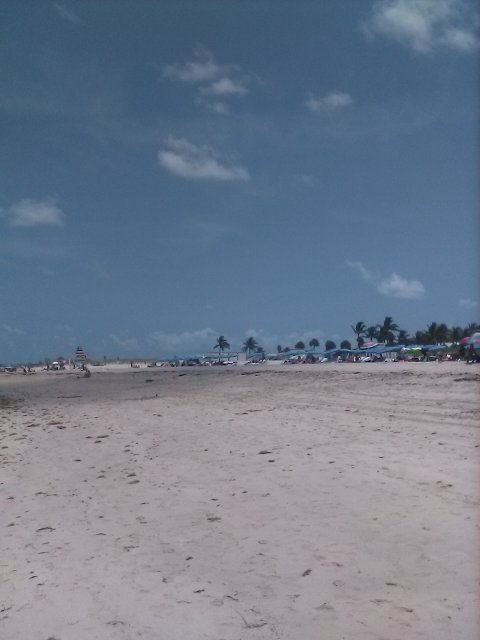 South-facing view down the beach near South Point Pier Park with the palm in question the leftmost one in the image.
This coconut palm is the closest one to the South Pointe Park Pier, which itself is adjacent to a much longer rocky breakwater that forms the northern side of the Government Cut passageway connecting the open Atlantic Ocean and lower Biscayne Bay to include the Port of Miami and its artificial archipelago of islands. 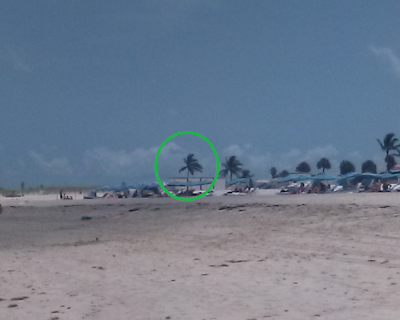 Above: Same picture as previous one, but cropped and with the palm in question circled in green.
In fact, there are a number of other palms beyond it, but they are smaller, not readily visible, and not, as near as I have found, a tall coconut palm. 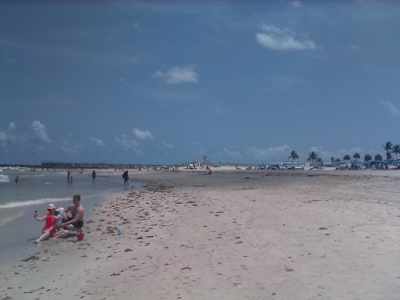 *******
OK, this entry is a coda to the sprawling one I posted about an hour ago ... I'm also reposting two of the 30 images from that entry.
I truly regret having to write this but the "environmental" situation -- ecological and human -- here in Miami Beach is quite unpleasant for me for multiple reasons, and it is making me call into question my longer-term plan of residing in the Miami area and, indeed, because of the ecological issue (see below) the tropics. 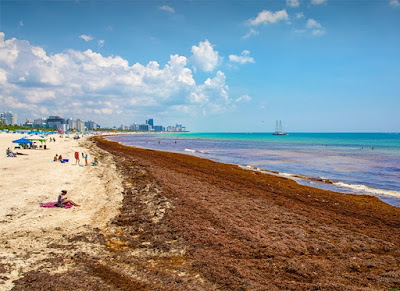 Above and below: Two images of a South Beach Miami Beach sargassum invasion taken on June 21, 2018 -- one from the beach (top) and one an aerial view (below) taken from this University of Miami "NEWS@TheU" article by Robert C. Jones Jr. from nearly three years ago dated June 25, 2018. 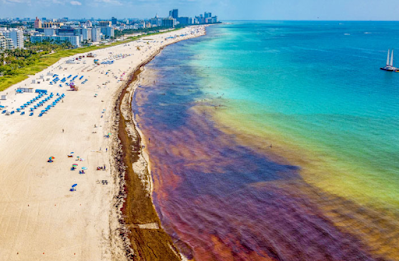 For starters, the sargassum "seaweed" -- or rather, now the world's largest harmful algal bloom -- situation is completely out of control and, in my visceral-minded sense, requires an militarized industrial response before the shit takes over the entire tropical latitude belt of the planet. Or better yet, a molecular-based biological crushing of it and replaced by something benighly floating that doesn't multiply "in monstrous infinity" (yes, that term).
Yes, I know that's deeply problematic. But I want sargassum EXTERMINATED from Planet Earth. 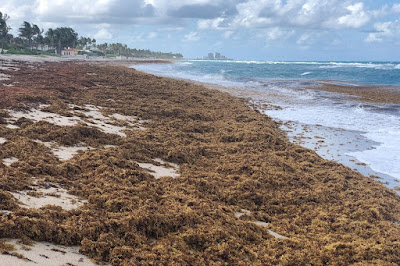 Sargassum heaped upon the beach in Palm Beach County earlier this month; photo by Brian Lapointe
But today -- this afternoon -- the shallow surf zone along the Entertainment District is absolutely disgusting with the fetid brown stuff rotting in the hot sunlight at the tide ebbs and flows. And owing to anthropogenic driven changes in ecology via more nitrogen and phosphorous runoff and, yes, a warming ocean-atmosphere, it is only getting worse. 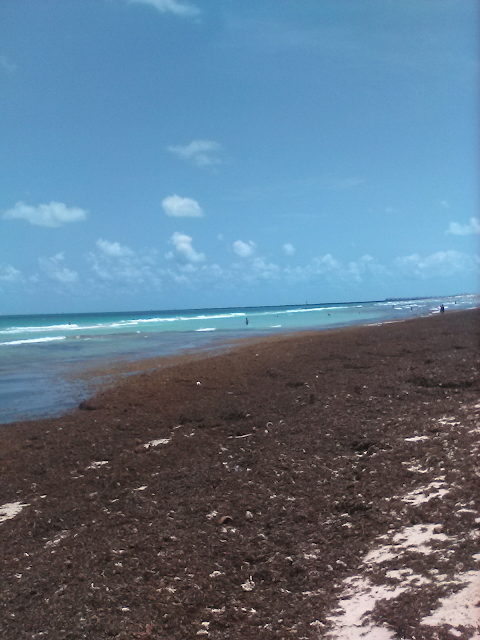 Above: A picture from this past Tuesday of that sargassum-fouled stretch of Miami Beach's beach around 3rd St.
By way of explanation, I went to beach in order to go into the ocean, but it simply wasn't possible. A large swath of beach was blocked off to the north (more on that below) and the nearest "clean" area of surf appeared to be blocks to the south -- ironically, near the spot that was so sargassum-fouled on Tuesday. 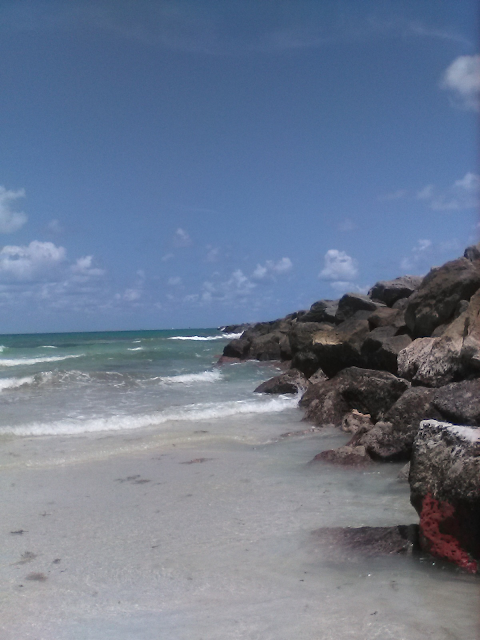 There is a supposedly a seasonality to sargassum -- March through October -- here, which means South Florida isn't even quite half through that notional period. Whatever the case, FUCK ALL sargassum.

The weather this afternoon was intensely sunny and too hot and dry with very little rainfall the past few months (encompassing the entire time I've been here).
So far this May, rainfall totals are in the 0.5-inch to 3-inch range regionwide to include 2.64 inches month-to-date at KMIA or 2.80 inches below the 5.44-inch normal (now set as 1991 to 2020).
This is also about 85 percent lower than last May's whopping 18.89 inches through May 28th. The year-to-date total of 10.72 inches at KMIA is 4.52 inches below normal.
Hopefully, hopefully, the fucking pattern will transition to a more normal June-like one as June starts.
The forecast has multiple chances of t-storms between Sunday and next Wednesday.
Finally, there is the open-ended, sprawling hip hop-themed Carnival-like chaos that erupts here every weekend even with "Spring Break" now over. I've already mentioned this and the performatively (and sometimes actually) violent, wholly mindless garbage that is endlessly generated by mass American hip hop and larger pop culture. The intention is always to instill a base-level fear and terror in "ordinary" people (if any such exist anymore) and a sort of total domination ritual. 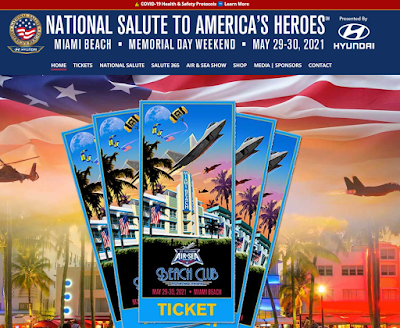 This weekend, though, is a very different type of event -- and somewhat unexpected given the current Big Media / Big Tech-driven WOKE Cultural Revolution paralyzing the United States. Specifically, it is a military-patriotic themed one in the form of the unintentionally ironically-named "Hyundai Air & Sea Show" whose theme is a "National Salute to America's Heroes."
Already, the fighter jets have been doing their roaring thunder thing in the sunny, vaulted blue sky featuring too few cumulus clouds. While this is fine as it goes, from another viewpoint, it is the U.S. military version of mindless hip hop culture's multi-sensory-assaulting performative dominance rituals. 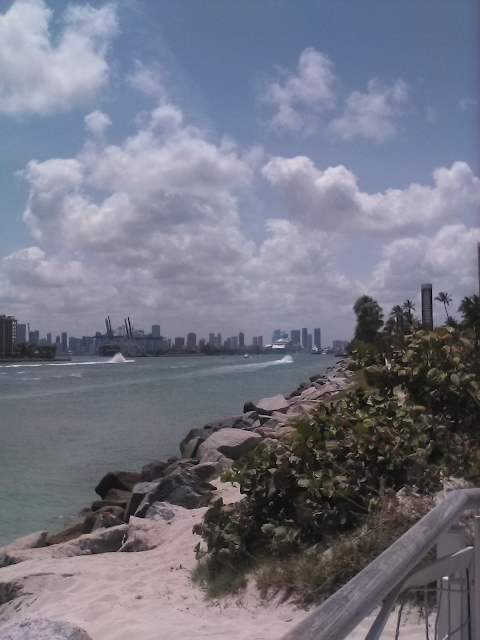 This is probably why so much of the fucking beach is fenced off.
And that brings up another Miami Beach issue and the place where I live, which could not be worse in terms of my immediate proximity to the Ground Zero of the Entertainment District taken as 10th Street and Ocean Drive. 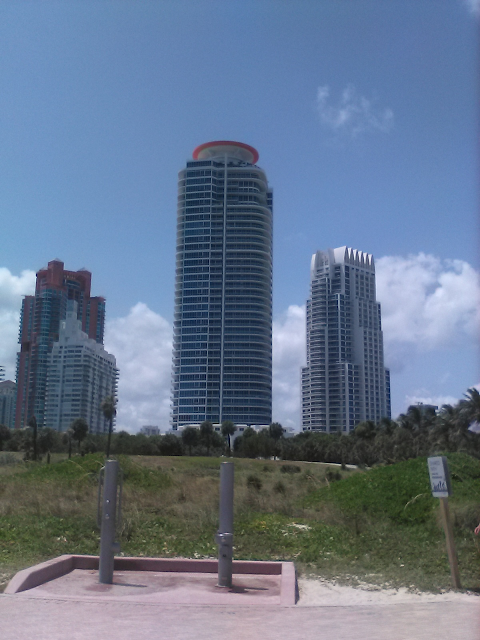 Most beach access points are again closed this weekend and there is a massive police and fire & rescue ("911") presence and their massive vehicles combined with all manner of delivery trucks, garbage trucks, and assorted dune buggies. The first half of the beach is basically nothing but a highway of hot sand. 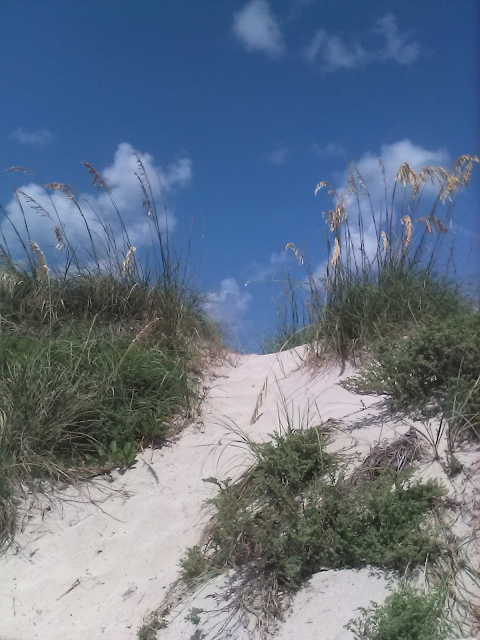 All in all, everything just sucks now. And I don't see how I can continue to live here beyond the confines of my lease -- which contractually lasts until April 30, 2022. But more to the point, I don't know if a tropical seaside climate makes sense given the sargassum situation.
I could just live instead somewhere along the South Carolina coast where this wouldn't really be an issue. Alternatively, and assuming the Covid shit is finally well in the past, somewhere along the southern New England coast -- since I do like seasonality. 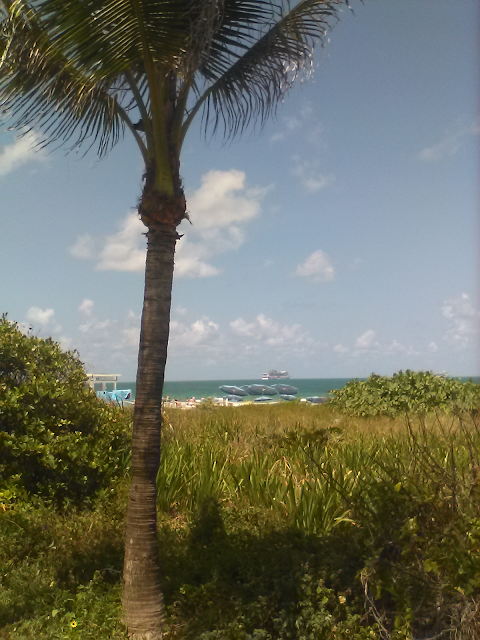 OK, that's all for now. As a final remark: Between this entry and my previous one, and unless something really requiring discussion comes up, that's all I'm going to write until probably Tuesday night. 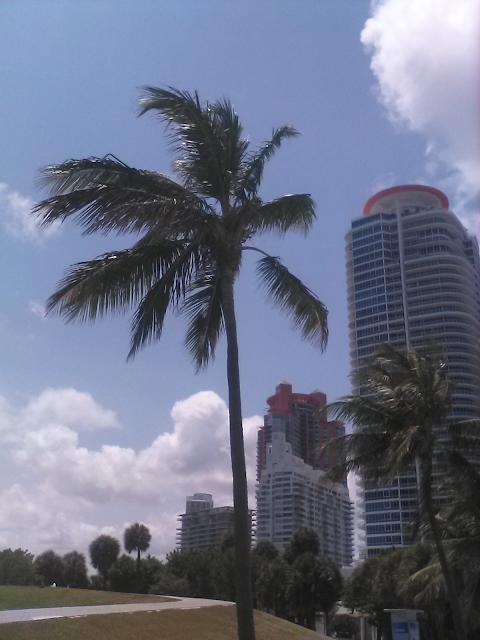 Above: Another picture of aforementioned the Coconut Palm at the End of Miami Beach but with one of the towers of the Continuum as backdrop.
*******
Updated 12:50 p.m. May 30, 2021
It turns out that there is ANOTHER coconut palm tree that grows almost right next to the South Pointe Park Pier at a distane, I estimate, about 300 feet closer than the picturesque, tall and slender one, I've been discussing. It is pictured below yesterday (May 29th) at 4:15 p.m. 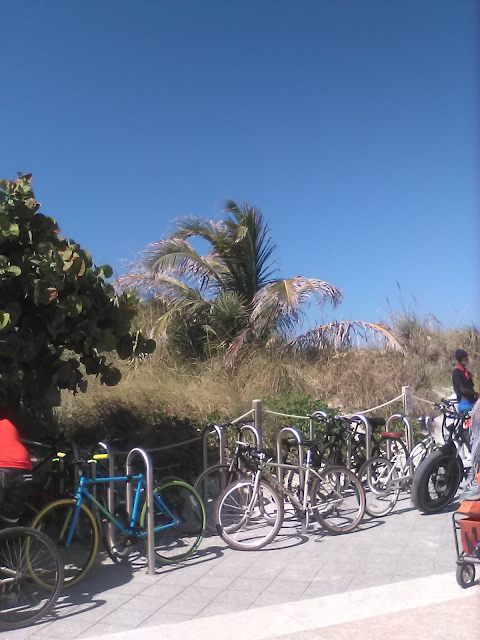 I discovered this yesterday (Saturday, May 29th) while spending time swimming in the ocean down by the Government Cut rocky breakwater 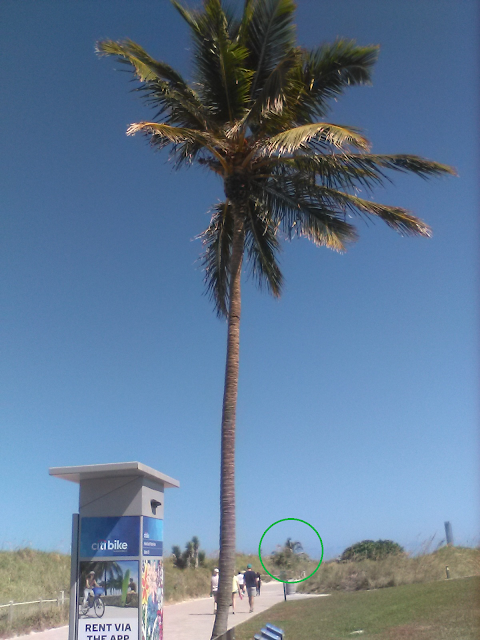 Above: The two coconut palms in question -- the symbolic Coconut Palm at the End of the World and the actual southeastern-most one circled.
End of Update and of Entry.
--Regulus
Posted by Regulus at 8:05 PM