Sunday In May Afternoon Blog Matinee: General and Specific Update Plus Palm, Palm, Palm Pics -- and a Few of the Ocean and Miami Beach Beach 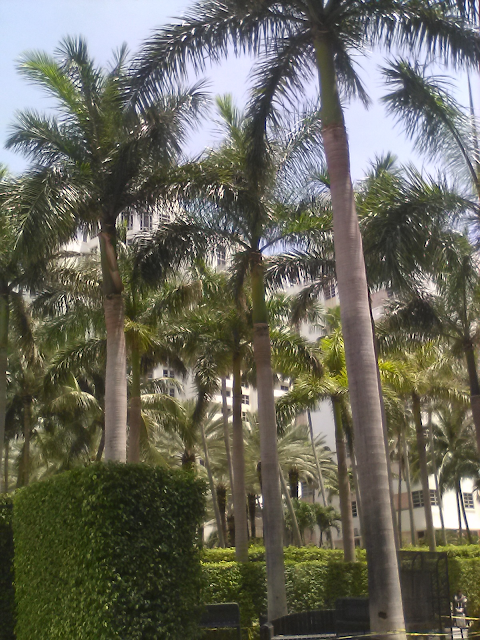 Royal Palms along with some other varieties in the area between Collins Avenue and the Royal Palm South Beach Miami hotel, Miami Beach, Fla., 12:24 p.m., April 29, 2021
The outdoor images in this entry were all taken last week by me. Except for the first two, I'm not captioning most of them. The file names contain place/time information. 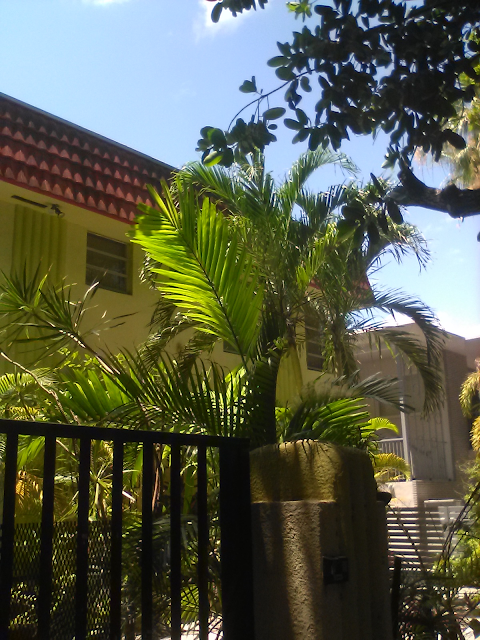 Tropical foliage cloaking one of the brightly pastel-hued houses along Meridian Ave, Miami Beach, Fla., 1:49 p.m., April 28, 2021
*******
Sunday afternoon, Second Day of May 2021.
This is the (second) entry that I wanted to post on Friday evening. Obviously, despite what I wrote at the end of my Friday entry, I didn't get around to posting that second entry on Friday. 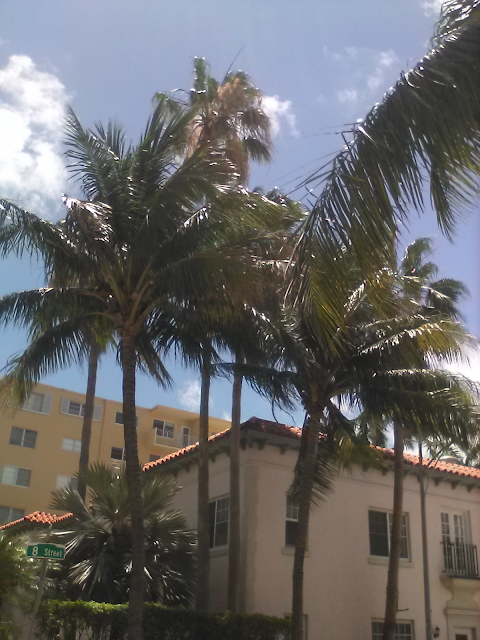 A few update items ...
I got my first Covid vaccine shot, namely, Pfizer. I got it at the Walgreens by the intersection of Collins Ave and Lincoln Rd (between 16th and 17th Streets) about a half mile from here. 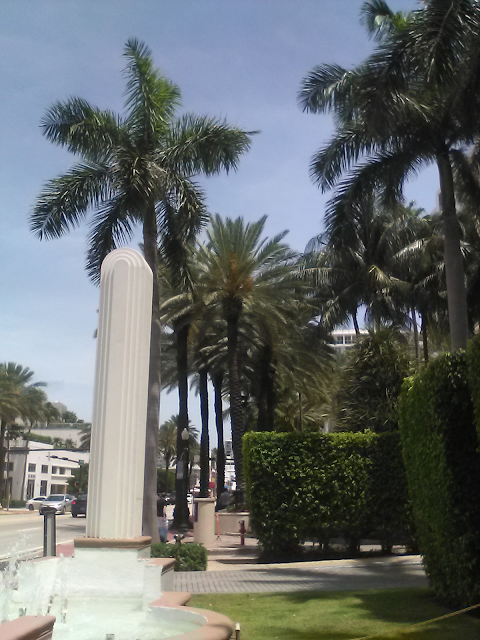 The young Hispanic (Cuban?) lady who administered the shot was so professional and yet friendly. This gets to a larger point that people down here in the Miami area just seem a lot nicer than in D.C., especially D.C. in the post-2015 era when everything turned to shit. 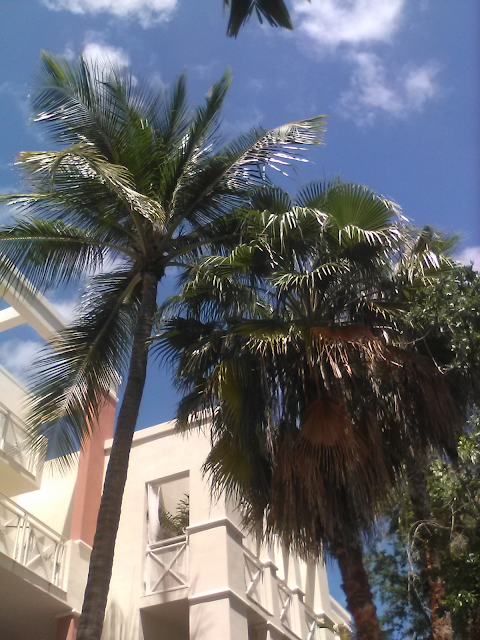 At the very least, folks tend to be in a good mood -- OK, maybe you'd expect that in Miami Beach, but still -- and not pissed off, paranoidal and fearful, and outraged, all while tweeting 500 times a day sundry "Social Justice Memes" battle cries. 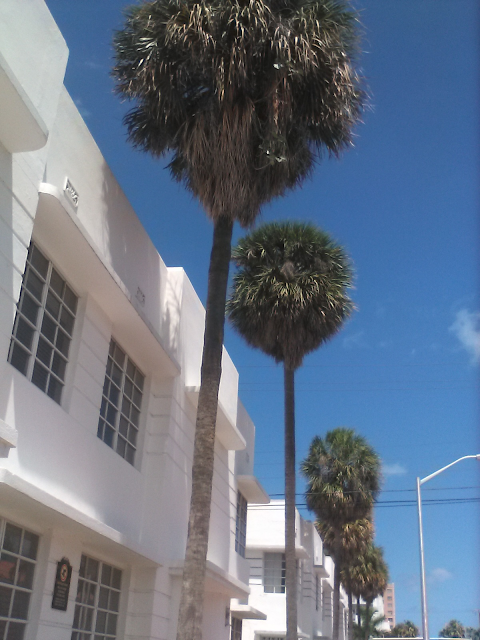 Fuck, D.C., that horrid place of psycho-spiritual death. It's become like fucking Tehran 1979 courtesy all those WOKE white women and their Church of Branch Covidianism, Seventh Day Social Justice.
Anyway, I didn't have any unpleasant side effects, just some soreness in my upper left arm where the shot was administered. The second shot is scheduled for May 20th. 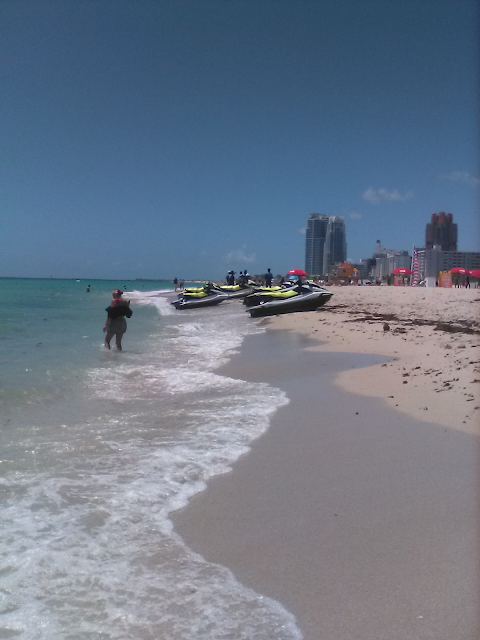 I've been going into the ocean pretty much daily with about an hour spent doing that or sitting on the beach. The mood of the ocean changes day-to-day. It can be quite flat with only a light and variable breeze off the water or it can be choppy with rolling shallow waves sparkling in the sunlight. The sunlight and sky conditions including humidity levels create different effects, too. 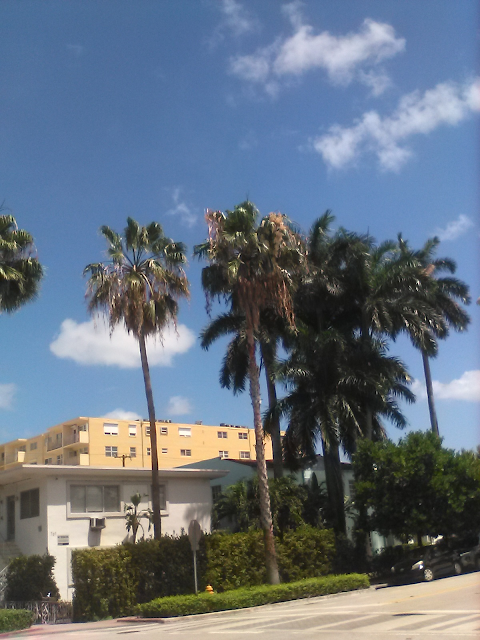 The beach -- like the Entertainment District -- can be crowded or not. The most croweded is, not surprisingly, a weekend feature. And, yes, the depraved lunatic hurricane of Spring Break -- into the eye of which I moved at peak intensity, so to speak, on March 18th -- is mostly over. But other groups are arriving and other events starting. 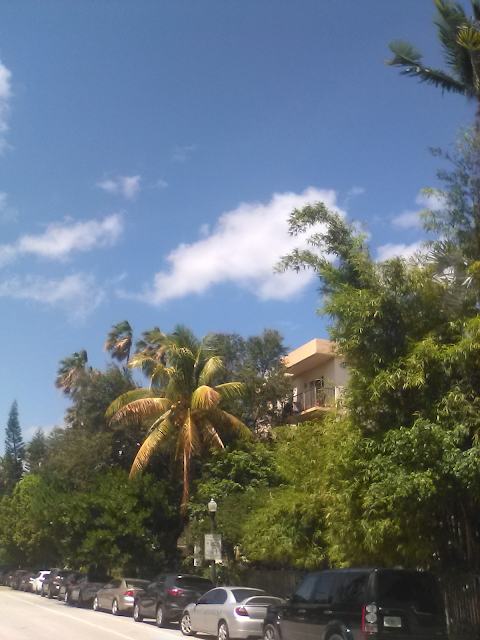 On Friday night, I went to the bar at Prime Italian colocated with the Hilton Bentley Miami Beach. It's one of about four "Prime" restaurants in a small area of South Beach. The place is so expensive and the portions ginormous. I ended up having a large, multipurpose salad (easily enough for three people) with pieces of pastrami or something like that added along with two drinks and coffee with a shot of Bailey's. The tab was about $118 pre-tip. 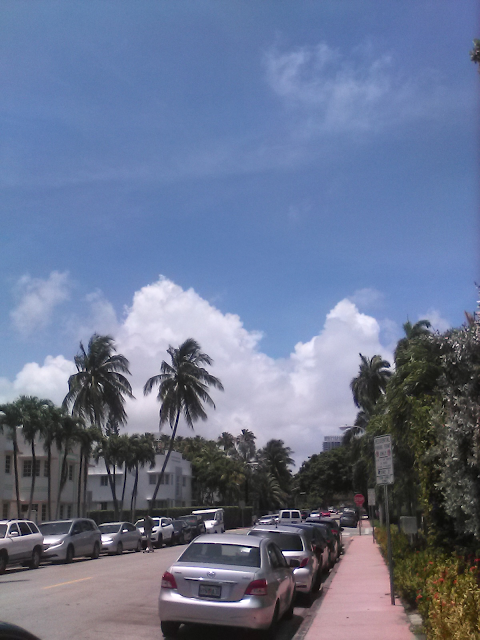 The street view picture above and the next five below were taken on Wednesday as I walked from the Walgreens at Collins Ave and Lincoln Rd, where I got my first Covid vaccination shot, to the Walgreens at 10th and Alton, where I went to pick up a prescription for Sumatriptan (that Walgreens now being my pharmacy). 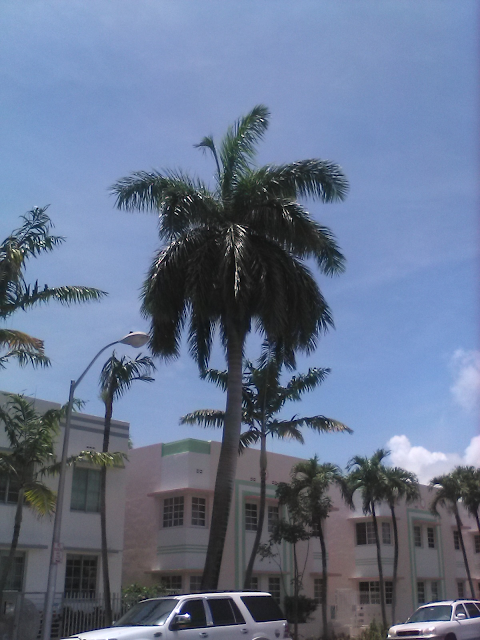 I keep intending to get a steak dinner, but the $65 cost just makes me recoil. When Chris T visits, I'd like to go there, ideally, sitting at a corner spot at the bar. There were a lot of people in the restaurant, and I'm wondering if the Covid-minded capacity limits have been increased. (I specifically don't follow local "Covid" news.) 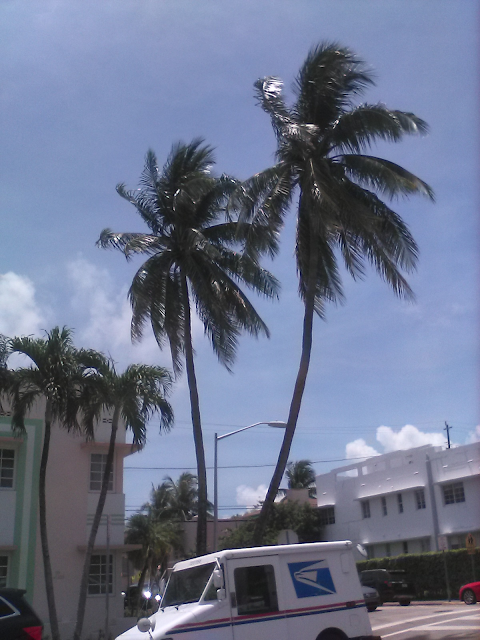 Thereafter, I went to South Pointe Tavern, a place I really like. By the time it closes at midnight on Friday and Saturday nights, it has the feeling of a stealth gay bar. In the end, though, I didn't really talk to anyone on Friday night -- well, one 30-something couple visiting from Rochester, N.Y. -- and instead sent a lot of texts. My coworker friend Matt R., as ever, kindly engaged me. 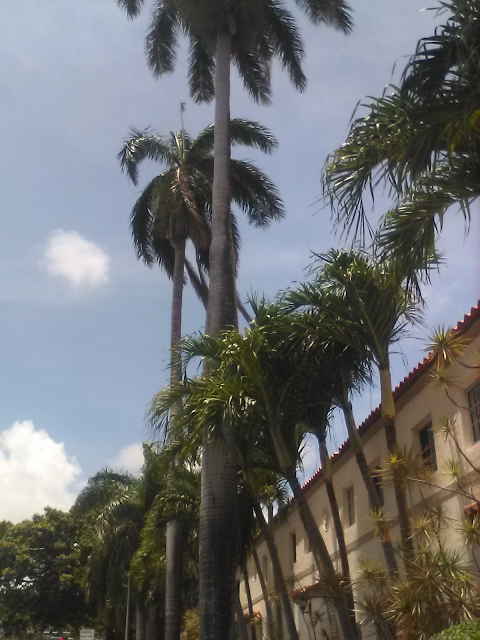 Oh, yes, I think the people I know back in D.C. are getting tired of seeing pictures of palm trees tree form-like, bamboo-related monocots. 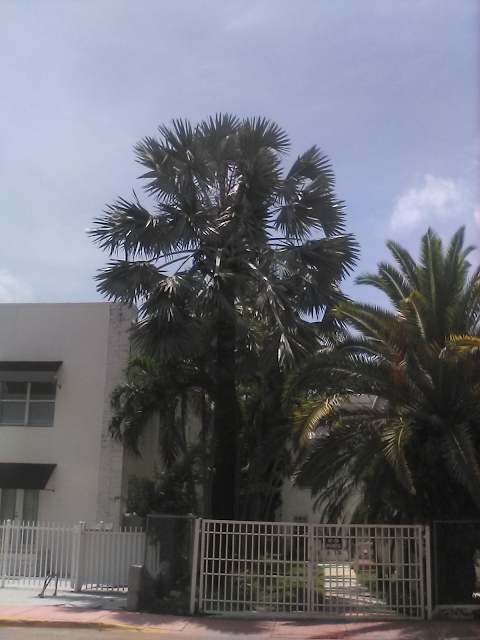 Last night, I went to Finnegans, specifically, the outdoor bar at sidewalk level along Ocean Drive. I had an excellent ribeye steak that was every bit as good as something 2-1/2 times the price at one of the Prime places. (It was $34 and included two sides.) Thereafter, I went to the bar in the restaurant Havana 1957 and had a couple more drinks plus a shot of that intense and wonderful Colada coffee. 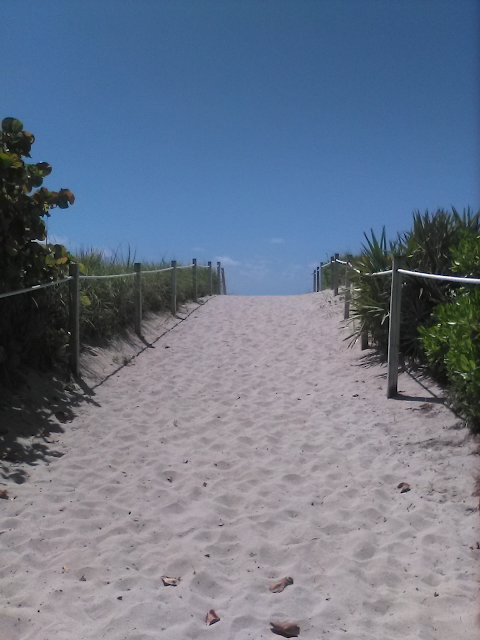 Turning to today, I've just returned from about an hour at the nearby beach -- mostly in the ocean. Today, the "mood" and feel of the ocean was wonderful what with the combination of nearly overhead dazzling sunlight in blue sky fleeced with some convective cumulus inland and baby ones far out to sea; warm aquamarine-turquoise water with shallow, incessant waves that started to break as the tide went out and the water got more shallow; and a nice breeze off the sparkling water. 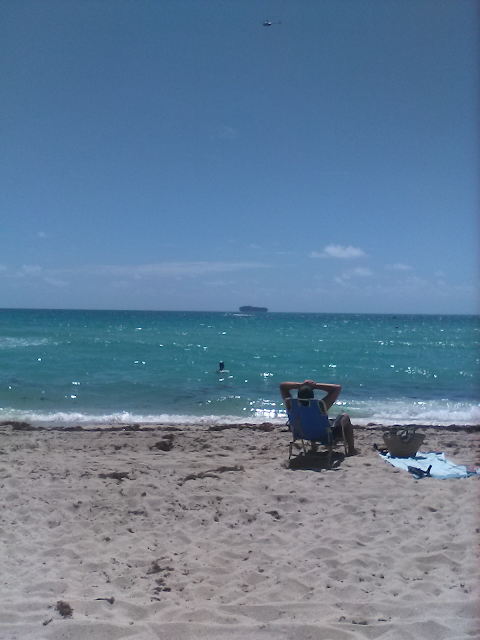 Above: That cargo ship on the horizon was GINORMOUS. It has just departed the Port of Miami via Government Cut, and I watched it slowly vanish over the edge of the world as it made a beeline to the northeast. At the very farthest I could see it, I would estimate it was 30 miles away. Oh, and I didn't realize that helicopter (top) was in this picture.
*******
For this afternoon, I will try to go to the same place I went last week with my father during what ended up his highly unpleasant visit here. As I mentioned in a previous entry, henceforth, I will go to his world (presently, up in Flagler Beach), not have him come into mine. It just doesn't work. 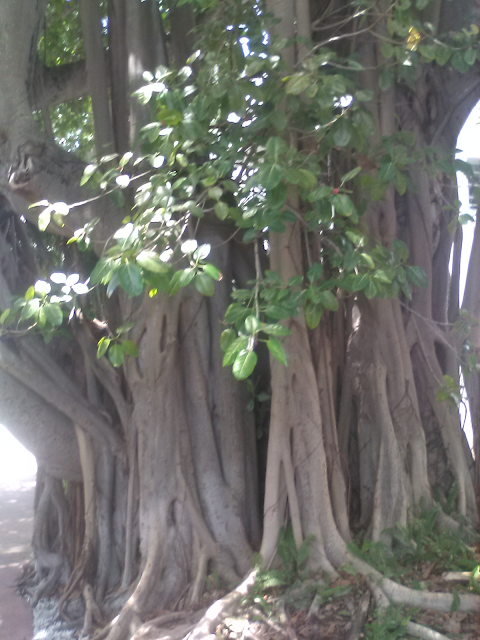 Looking ahead to the week and, indeed, the next two weeks, I have a lot of work-related tasks to complete both recurring and federal client-related ones. This is why my blogging schedule will be light. Indeed, I moved back for a second time my appointment with FLHSMV -- this time to May 26th. That week should be slower and trekking into downtown Miami from Miami Beach without a car more doable. 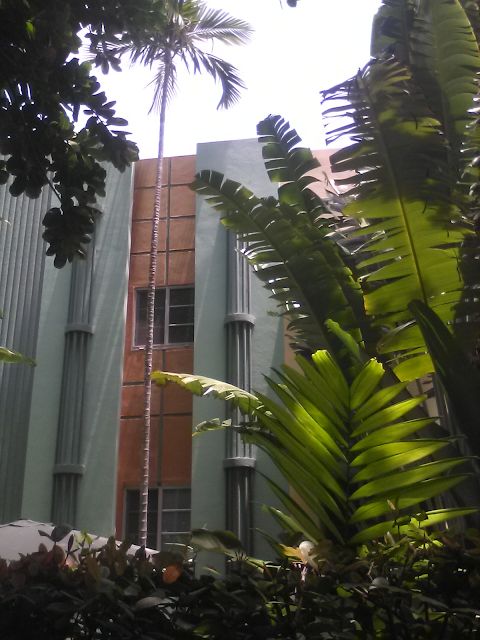 UPDATED 11:37 p.m. 5/4/2021: I made a significant error in my taxes involving this Form 8889 / HSA issue that H&R Block caught. See here for clarification
Oh, yes, one other thing:
I spent a large amount of time beginning on Thursday night doing my federal taxes. This wasn't because they were particularly complicated -- I had no student loan interest deduction in 2020 because no payments were made all year thanks to Covid, but I had to complete a Form 8889 for my HSA account. It had the effect of lowering my 2020 AGI by $3,740 from my 2019 AGI even though my line 1 wages and salary amount was a touch ($142) higher. 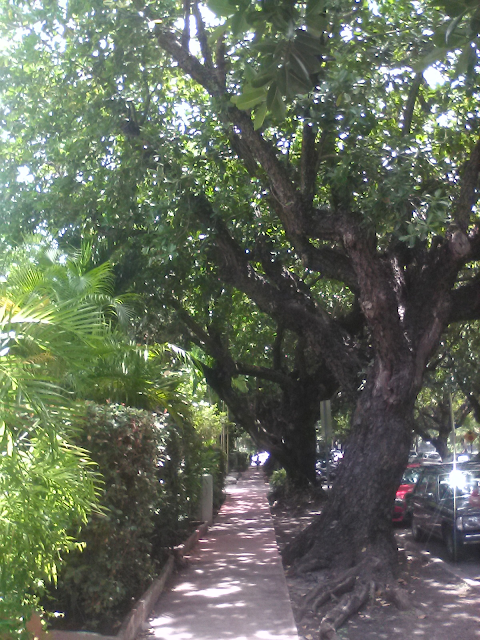 The result is I get a combined federal and D.C. refund of $2,570 (assuming I did it all correctly).

However, I am constrained to use that fucking Free Fillable Forms (herein denoted "FFF") for both federal and D.C.
As background, last year, I mailed in my federal return in, like, March and the IRS simply never got it. By July, I opted to use the "FFF" approach precisely because it involves an electronic submission. I also used it for D.C. (it's a separate account you have to create).
At that time, the federal one was rejected two or three times -- the rejection comes automatically and quite quickly, within a few hours -- as was the D.C. one.
I managed to resolve the FFF issue but for the D.C. one, I actually reached a D.C. OTR person, who ended up being, shockingly, very helpful and the problem was resolved.
This year, the goddamn Federal FFF rejected SIX times. And the rejection language is so offensively cryptic. Initially, one of the issues was "alimony recipient SSN" -- which happens if you put "0" (zero) there rather than leaving it blank. To FFF, "0" is not "nothing" but "something," as in, you're in an alimony arrangement. OK, fine, I get that. 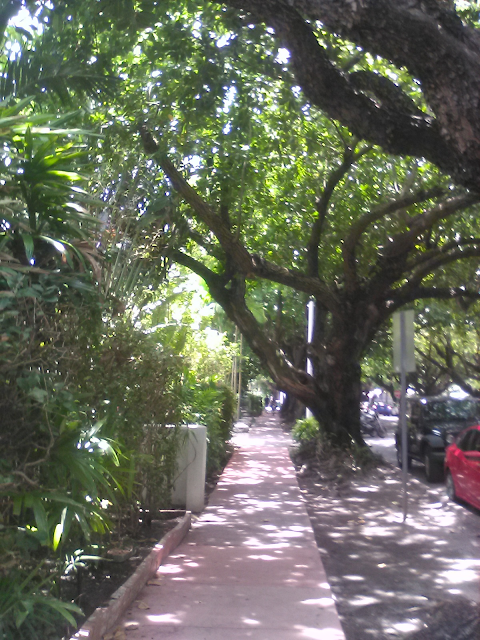 But the next issue was some wholly intractable and, I believe, fundamentally nonsensical one that occurred in the actual E-file sequencing page where for some inane reason, you have to put down your previous year AGI or a pin number you created last year. Repeatedly, I entered the correct AGI and repeatedly it rejected it.

By the sixth rejection, I said fuck it, deleted the files (although I had "printed" and saved PDF versions of them). Instead, I set up an account with and made an appointment for Tuesday afternoon for the nearby branch of H&R Block.

D.C.'s stupid D-40 form doesn't have an online fillable version, so I created it in D.C. FFF and just saved it. I then uploaded all these files to my H&R Block site account. My goal is to have H&R Block just electronically file the damn taxes for me. That's a lot of money, and I don't want to lose it.
By the way, in moving to Florida and establishing residency here, my monthly tax burden -- assuming two pay checks per month on the biweekly cycle -- fell by about $360. So, I was paying the District of Columbia and its hateful, racialized, venal, breath-takingly incompetent kleptocracy almost $4,700 per year -- less about $950 after filing the return and taking the standard deducation -- just to be despised and treated like shit.
Yeah, try calling 9-1-1 when some homeless lunatic is attempting to violently attack you. That's your Blue City defunded police force WOKE dystopia.
Now, I realize that H&R Block is probably going to take a 20% cut (hopefully not higher than 25%). And I'm fine with the fact. Anything to avoid the Kafkaesque nightmare of FFF and its REJECTED! ACTION NEEDED!" emails. What's more, even if I could print out all my files as paper copies and mail them in, I don't trust the IRS to ever get the return, especially because of the all-purpose excuse of COVID.
Again, refer to this entry for explanation of Form 8889-related HSA error I made and the correction. End of Update.
******* 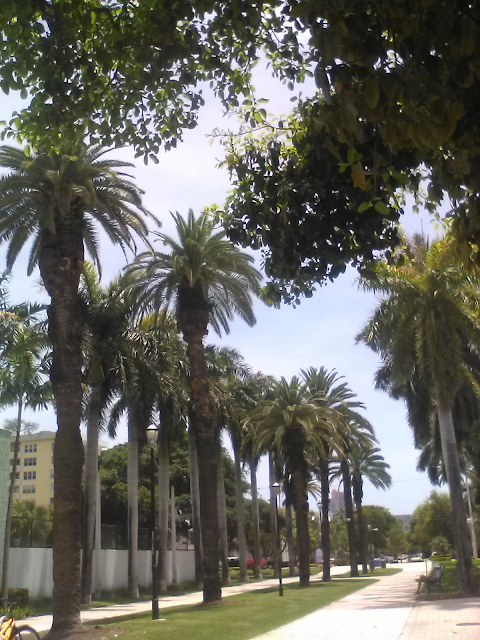 Palm-lined walkway in Flamingo Park, Miami Beach, Fla., 1:38 p.m., April 29, 2021
Speaking of zero-not-nothing ... OK, I created a standalone entry I posted last night linked here.
And on that note, I am really signing off for now. My next entry will not be until Tuesday or possibly Wednesday night.
--Regulus
Posted by Regulus at 3:39 PM