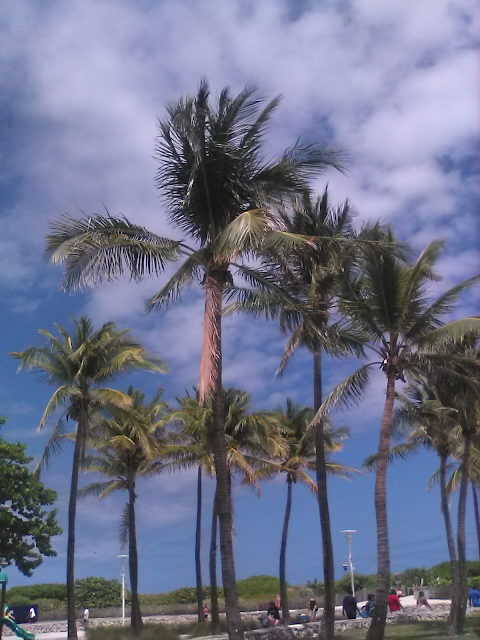 Sunday early afternoon. OK, mid-afternoon by the time I actually post this entry.
As I write this, I'm listening to a certain 78-rpm jazz, swing, and Big Band podcast as I write this. Given the political commentary in this entry, I'm not going to mention whose podcast it is since I am a patreon supporter of his, but his politics are definitely not aligned with mine. 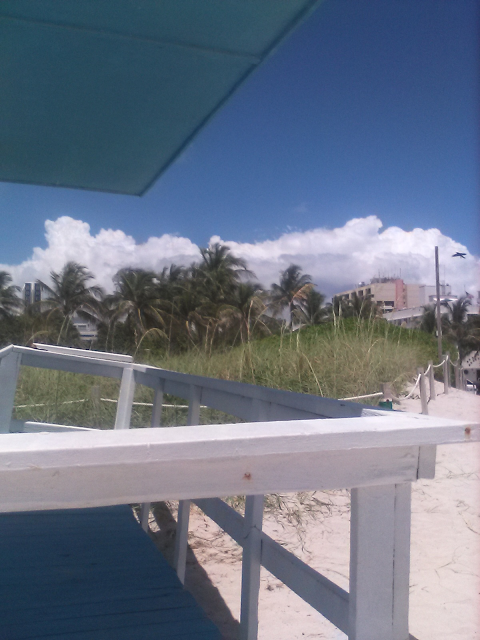 OK, so, I have some free time this Sunday, and so my previous posting notwithstanding, I've decided to post a short entry now. To be clear, the reasons made therein for why I will have very limited blogging through next weekend remain quite valid and I will not be posting anything before Wednesday night and, quite possibly, not until next Sunday/Monday timeframe.
As ever, there is a lot I want to relate, but everything ends up leading me down an unwanted rabbit hole. 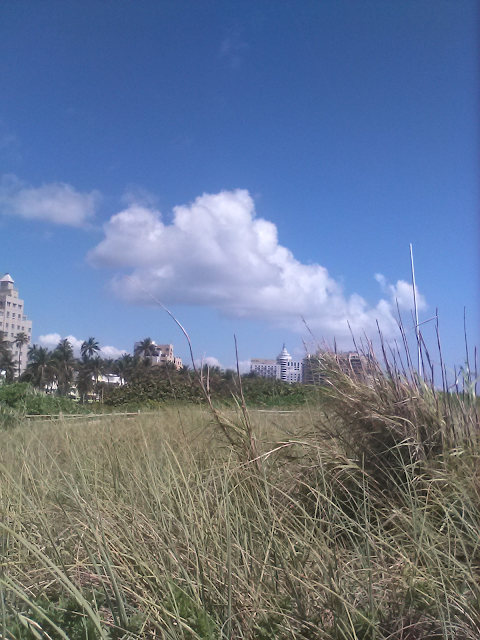 So, as an update ...
Last night, things were wild again here in Miami Beach's South Beach, in particular, the Entertainment District. Remember that I live basically at the very center of the Art Deco / Entertainment District, but somehow my apartment in its location and design manages combined with my hallway neighbors is surprisingly quiet. The only exceptions are the occasional ruckus or hip hop-laced Shuka-BOOM, Shuka-BOOM, Shuka-BOOM passing on Collins Avenue. 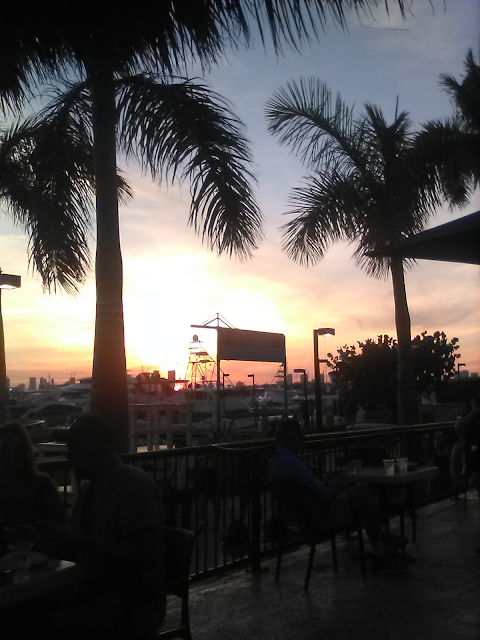 As it is, Miami Beach is a lot quieter, especially during the work week, than when I moved here almost seven weeks ago at the height of an especially frenzied hip hop-infused and generally American culturally mindlessly depraved Spring Break. 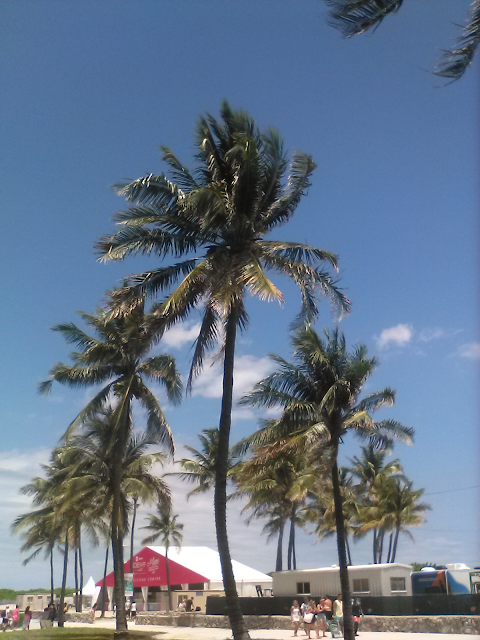 Needless to say, there is a vast amount of pent-up energy and frustration from the open-ended Blue State power-grab, power-mad Covid lockdowns And remember the electorally important portions of the citizenry of those states are fanatically pro-lockdown. 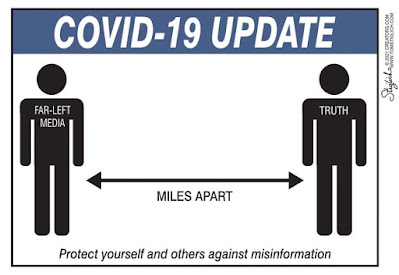 This is why, for instance, in my erstwhile shitty home of the District of Columbia, it's totalitarian-minded but otherwise venal, hateful, and, incompetent, and -- incompetence notwithstanding -- incredibly destructive leadership of Muriel Bowser, all the LOCKDOWN-LOVING Millennials are THRILLED at the fact that there is no dancing at weddings because of "Covid" and "the science."
They're like those deeply mentally fucked up sheeple Canadians on TWATTER, I mean, Twitter celebrating the armed SWAT team arrest of a pastor in Alberta trying to hold a church service because of "THE SCIENCE" and what a vile dick is Justin Trudeau. 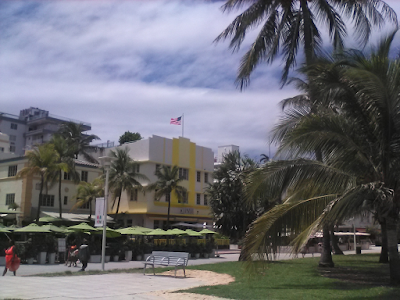 It's such a deeply malevolent and horrifying reality in which we are living, especially in what has been called the Faucian portions of the United States, which thankfully is not Florida.
About Bowser and dancing, she's opposed to it at weddings, but is fine with it during Antifa / BLM rioting episodes -- especially when lethally carjacking Pakistani migrants or, in what is a Blue City speciality, fully-armed and terrorizing drivers by invading busy intersections and committing acts of violence against them. 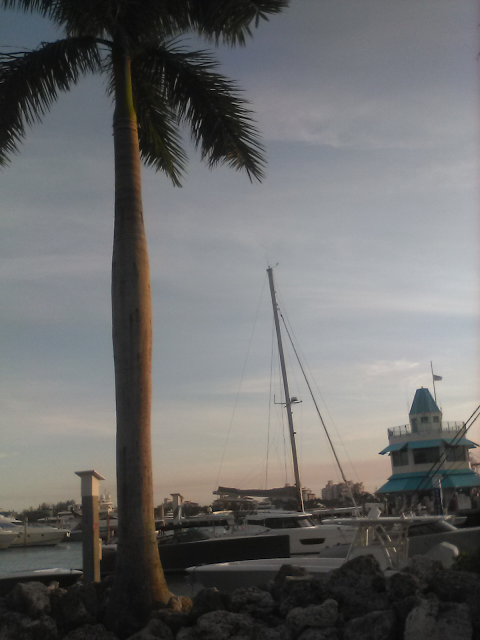 For me, I think that's the worst feature of the present nihilistic anarcho-tyrannical dystopia featuring spasmodic violent civil unrest fanned by an illiberal leftwing Cultural Marxism operating under the banner of racial justice and in a demented marriage to Corporate Oligarchy: 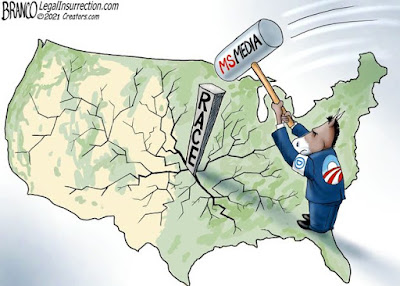 I refer to how Blue City and Blue State Democrat pols (ESPECIALLY Oregon), their completely neutered and ineffectual ("de-funded") police forces (with ongoing mass exoduses), and sundry "anti-racist" prosecutors are actively encouraging this sort of street-level civil war against civilians. And whenever any of them fight back -- using their cars as weapons to save their lives and the lives of their families -- these "WOKE" prosecutors from the Ibram X. Kendi School of Trotskyite Morality then prosecute them. 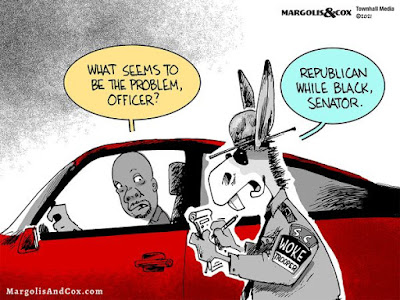 This roadway terror is inherently a lot more dangerous than the other violent street-level terror engaged in by these Zombiepocalypse sorts, namely, descending upon, berating, and sometimes violently assaulting outdoor diners. I really hope some of the Red States start passing laws allowing drivers to have legal cover for dealing with these terrorists trying to kill them. 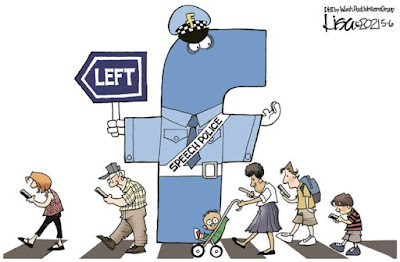 As for the diseased hydra of Illiberal Left Big Tech and Big Media, they are as noxious as ever although the latter functionally has no influence on society anymore: No one pays any attention to what they say OR, alternatively, those who tune in are already 100% in agreement. No minds are changed. Ever. 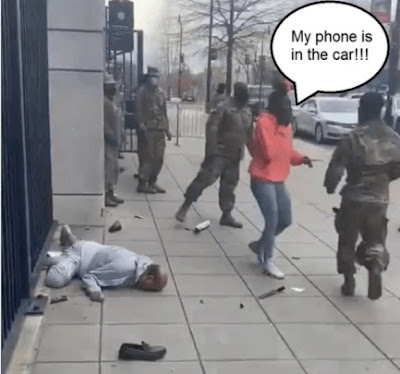 One last point: Of all the horrid Democrat pols these days, it's Muriel Bowser, Mayor of my recently-vacated-after-far-too-long home of Washington, D.C., that galls me the most. In fact, I can't even talk about her on this blog precisely because I just can't say what I really think of her as a leader and as a human being. But I will say this: While she refuses to say his name, Mohammad Anwar's blood is on her hands and will be forever. 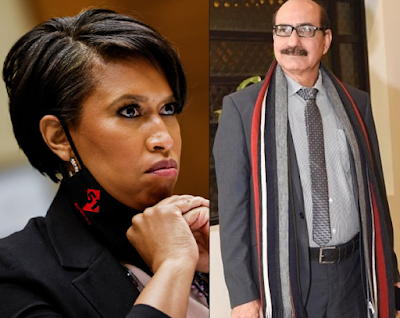 Anyway, changing subjects ... Last night, I went to South Pointe Tavern, where once again, I seem invariably to encounter nasty people who don't want me to sit next to them. I don't why that happens to me so much, and just there, but it does. People just immediately take a disliking to me. It's always been like that. 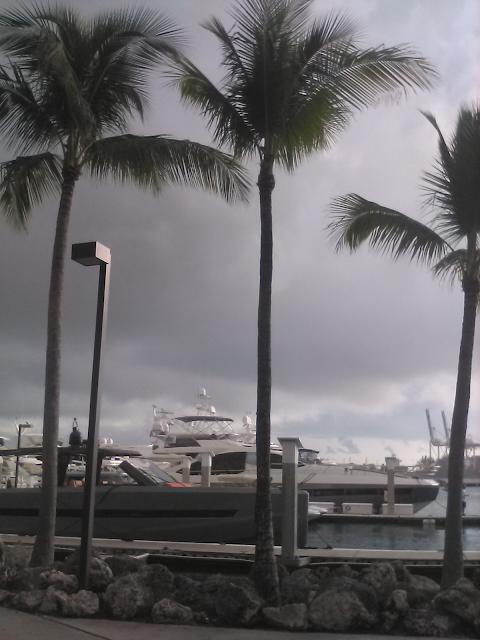 I'm sorry to report that this isn't just a shitty D.C. feature but it also seems to happen to me here. So, that means it's the Universe itself that doesn't like me, not just the District of Fuckumbia.
I had the same thing happen at Finnegan's yesterday, where I went to get a needed lunch. (I'm having a hard time keeping food in my apartment, and cooking has been very problematic. I just can't seem to do it here.) 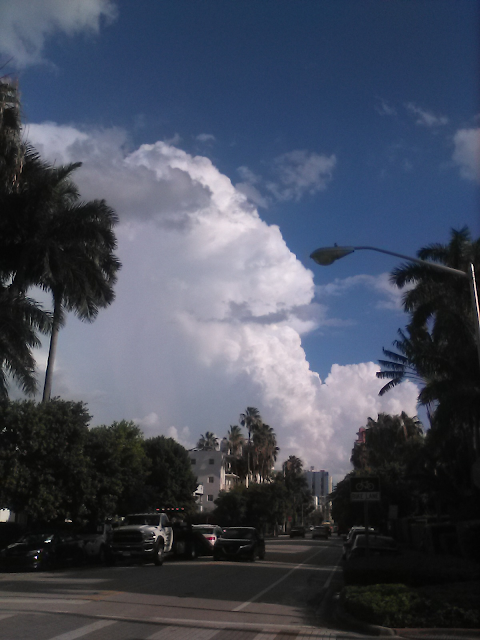 In that case, though, I ended up having with that fellow a 90-minute long social interaction ranging over all sorts of topics. Honestly, I thought he was just some old alcoholic bum, but it turned out he owns and runs a medium-sized company that sets up warehouses for really big retailers and even e-commerce companies. 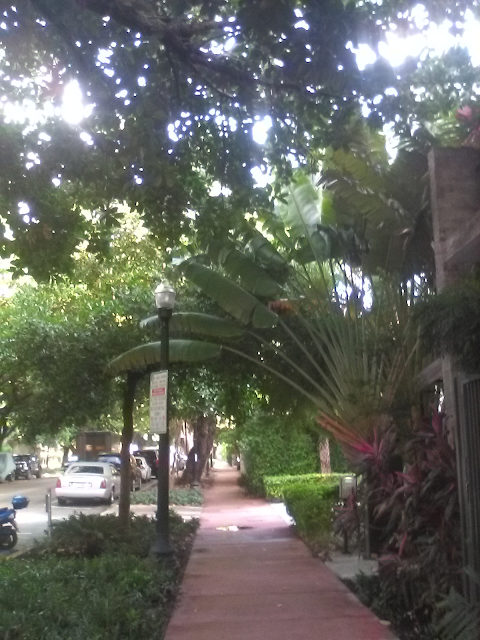 He is quite wealthy judging by those Bitcoin and other crypto-currency dollar amounts he showed me on his smartphone, not to mention all the high-end prostitutes he rents, as seen in pictures of him with them including in fancy condos and boats.
As Chris T. said on the phone yesterday, you might find a lot of these rich people on the down low here in Miami Beach. 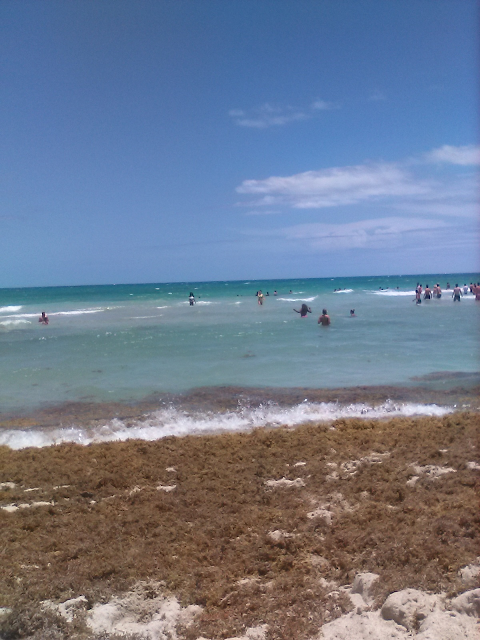 As for the ocean, while the breeze and wave action made it sparkling aquamarine-turquoise beautiful in the sunlight yesterday, the northeasterly wind brought in massive quantities of sargassum seaweed (see images directly above and below). There was so much sargassum that it created a 20-foot wide zone on the sand, not to mention a 10 to 20 foot wide, rapidly moving fringing zone in the "swash zone" and a few yards seaward. 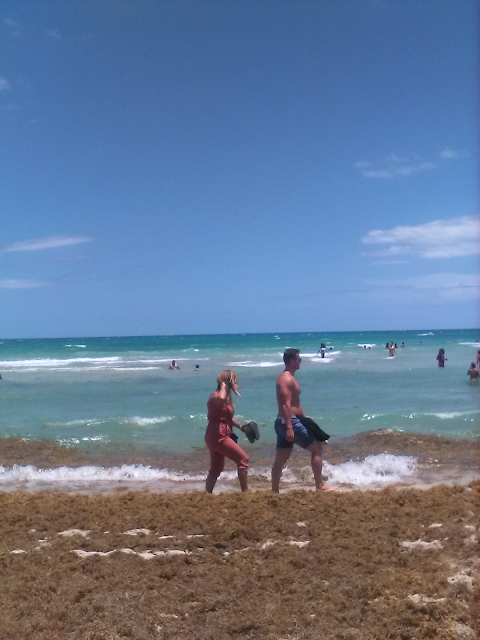 Beyond the fringing sargassum zone, it's just floating individual floating mats and clumps of the stuff in an otherwise wonderful and boundless ocean. Having said that, and even when placid, it still IS the ocean in all its indescribable expansiveness and gargantuan might. What's more, there is MUCH marine life -- including occasional passing manatees and, yes, various sorts of sharks that mostly don't pay any attention to people. 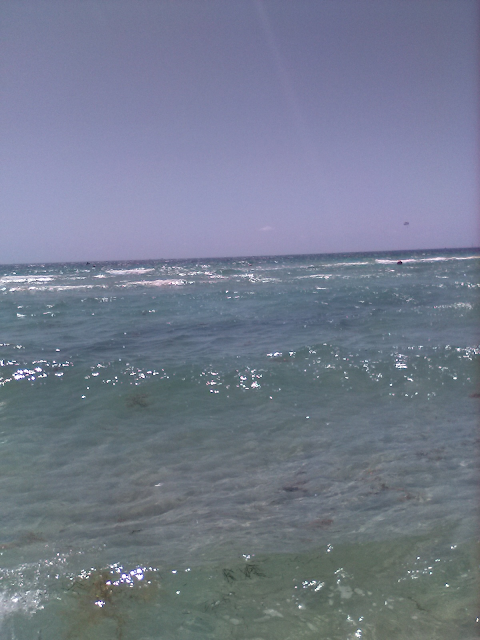 For today, my plan is to go to Santorini nearby in South Pointe and sit at the bar. I'm probably going to skip going into the ocean.
As it is, it has beem mostly cloudy-to-overcast much of today so far with scattered convective showers and even thunderstorm cells moving inland ESE to WNW from the ocean. This is assocaited with the return flow along an old, stalled, nearly washed out cold front elongated east-west from the central Keys across the Bahama chain. 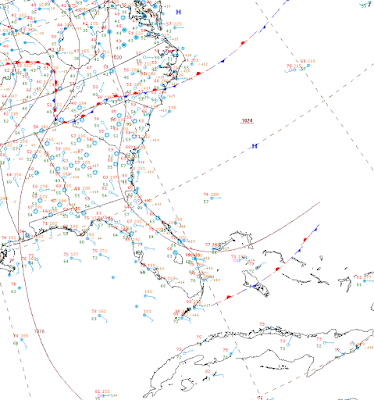 NWS high-resolution surface weather map for the United States, SECONUS portion, valid 12Z 09 May 2021
*******
That front passed through on Friday night, momentarily turning the winds NW before veering quickly to the NE, as happens often down here at the "bottom" of a stalling cold front. My understanding is that cold fronts simply never clear the Florida peninsula between about early June and mid-to-late September. 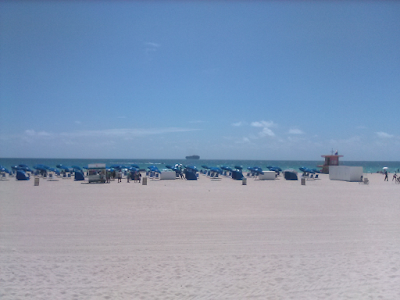 OK, I'm going to wrap up this entry. As I said, I won't be posting anything until at least Wednesday night and, more likely, not until next Sunday/Monday. I simply have too much work to do next week, especially between tomorrow and Wednesday afternoon to post anything to this blog. 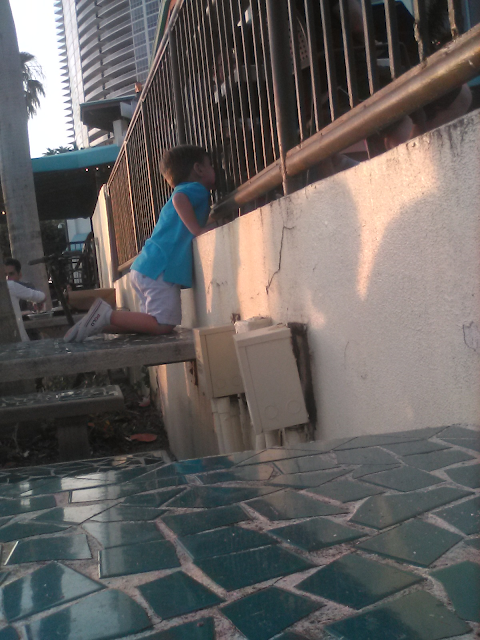 Oh, yes, I should note that while today is Mother's Day, I've not sent anything to my mother, nor will I contact her in any manner. The situation between me and her -- which was, let's face it, always a deeply abnormal one and only "worked" occasionaly because of my nonstop efforts -- has finally just ruptured. 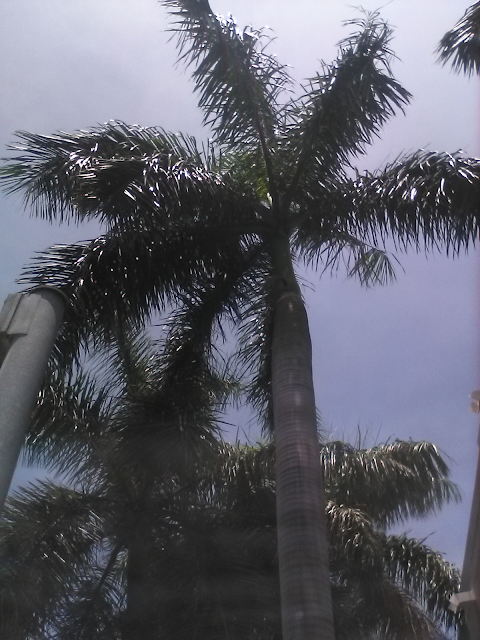 The level of fear and dislike to outright contempt combined with endless jealousy is simply too much for me. In her mind, I ruined some ideal life she could and should have had, and I've had to apologize for my rotten and unwanted existence ever since. I'm just one more person who has wronged her in her endless life of grievance. Well, I'm just done with that. I'm fed up with it and her.
Let me make this point clearly: I would have some relationship with her but she has to change -- and at 72, that's not going to happen. The patterns are way too set. Indeed, she was thrilled when I cut off contact back in late January. (I've only texted her a few times, and she has never responded.) 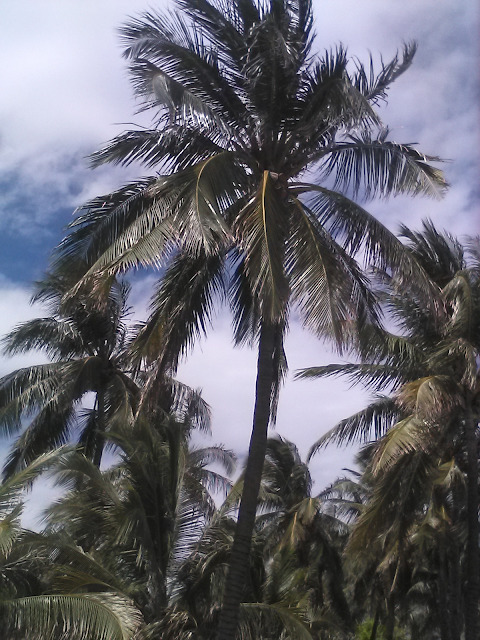 The few friends she has, to the extent they even know I exist, are simply incapable of grasping the enormity of the abnormality here, and why it is this way, so they just discount it and provide airy bromides about "calling and telling her you love her" and things like that. 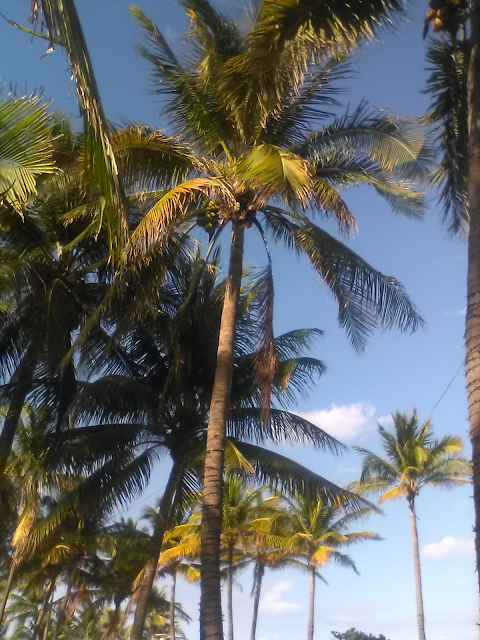 As for her brother and my uncle in New Jersey -- with whom I got back in touch in December after a decades' long gap because of her and precisely because I stopped listening to her -- he tells me just to move on and forget it. It's jarring and abnormal advice, but in this situation, it's correct advice.
Well, she has her life in Maryland and I have mind down here in whatever ways time and tide carry it along. 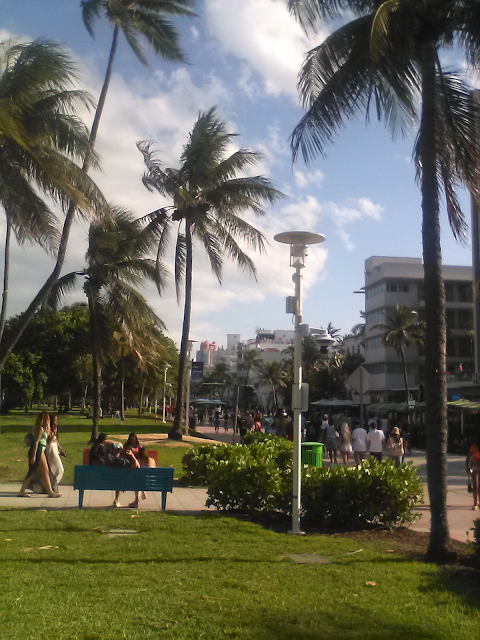 OK, I'm signing off for now. Again, please keep in mind I likely will not be posting any entry for up to a week from now.
--Regulus
Posted by Regulus at 3:40 PM