Reposted: Full Transcript of Christopher Rufo's Interview with The Atlantic Plus Related Tweets on the Poison of Critical Race Theory (CRT) and Steadily Spreading Efforts to Stop It - Interspersed with Pics of the Rugged Farallon Islands 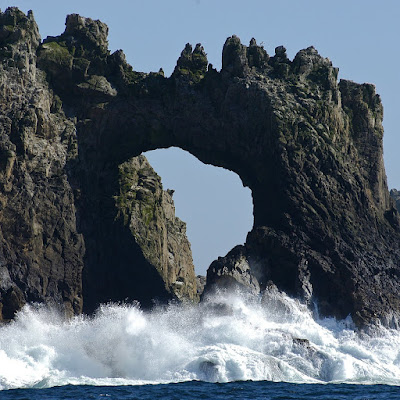 Crashing surf on the rocks of one of the Farallon Islands in the Pacific Ocean about 30 miles off the coast of San Francisco
Among the pictures in this entry unrelated to the written topic are additional ones of the Farallon Islands.
*******
I must repost in full the transcript of an interview of Christopher Rufo on the existential threats posed by the poison of Critical Race Theory (CRT) as a race-based Marxist ideology and -- as implemented by corporate America -- a rolling train wreck of the very people who are supposedly going to benefit from this deeply socially destructive garbage while being, in fact, for the benefit of the corporate oligarhical overclass and the larger and worthless professional - managerial elite. 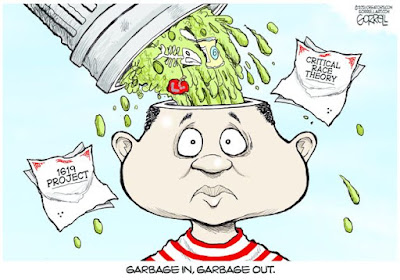 The current chief vector of this social virus, Ibram X. Kendi. He's the Leon Trotsky of this socially destructive ideology. I've no doubt that Kendi "believes" his own ideology -- that is, he's not a pure grifter or race-baiting provocateur in the fashion of Al Sharpton. 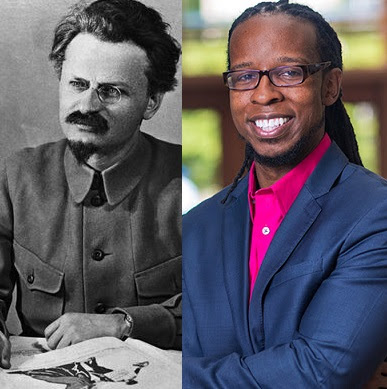 But let's be clear: If this Trotskyite "antiracialist theoretician" somehow achieved his dream world in some shrunken far left Blue States portion of the United States, as the internal power struggles intensified, he'd be no match against, say, a truly violent fanatic from, say, the New Black Panthers or that Hebrew Israelite hate group. 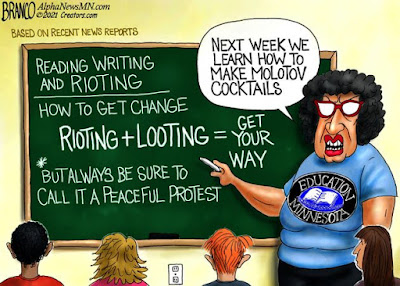 That emphasizes a point I made in this entry: As feckless as he is, Ibram X. Kendi will NEVER debate or attempt to defend this garbage outside of the cosseted "safe spaces" of the American Big Academia racket. Not in front of a Congressional committee, not in front of a local school board (where CRT is engendering a growing, angry pushback). All he will do is tweet or preach to his WOKE choir at a "seminar" from his "Chair."
As for Robin DiAngelo, she's just a wackadoodle. I don't even extend to her the courtesy of taking her seriously. 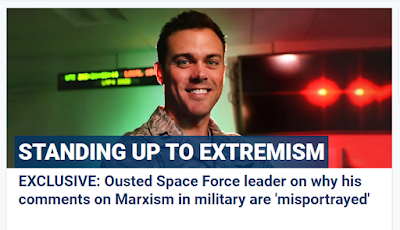 Anyway, the interview was with The Atlantic's Adam Harris. I didn't actually read the interview -- I'm not interested in what garbage misinformation or lies The Atlantic peddles -- but I think it exceedingly important that Rufo put out the full transcript of the interview (which, I'm assuming, was by email).
I am glad that Fox News is giving heavy coverage to Lt Col. Matthew Lohmeier and his sacking by senior Pentagon leadership for the crime of calling attention to the Marxist and hence deeply and dangerously un-American notions built into CRT. 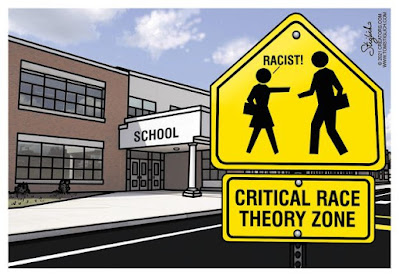 It's important to note that the virus of CRT has infected pretty much all of America's institutions across the entire culture and it is only getting worse. And the "anti-racist" hucksters and assorted corporate parasites are getting rich bigly off of it.
I received Rufo's article with transcript in the form of an email because I'm on his email distribution list, but here is a direct link. 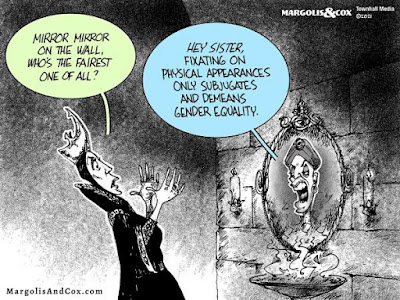 OK, this concludes my personal part of the entry.
--Regulus
***************
MY CONVERSATION WITH THE ATLANTIC
Transcript of my Atlantic interview on critical race theory. 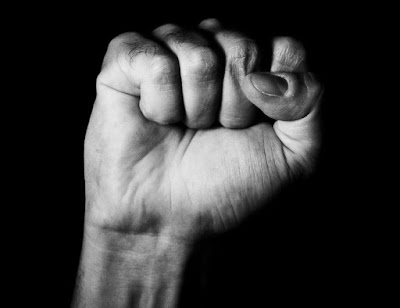 The Atlantic magazine recently published a story about the politics of critical race theory, declaring that "if a single person bears the most responsibility for the surge in conservative interest in critical race theory, it is probably Christopher Rufo."
I spoke with reporter Adam Harris about my investigative reporting, legal coalition, and state legislative victories. Here is the full transcript of my interview. 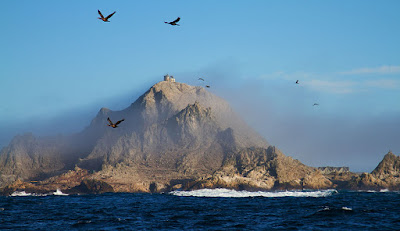 The Atlantic: How do you define CRT?
Christopher F. Rufo: I’ll crib from a recent interview: critical race theory is an academic discipline that holds that the United States is a nation founded on white supremacy and oppression, and that these forces are still at the root of our society. Critical race theorists believe that American institutions, such as the Constitution and legal system, preach freedom and equality, but are mere “camouflages” for naked racial domination.

They believe that racism is a constant, universal condition: it simply becomes more subtle, sophisticated, and insidious over the course of history. In simple terms, critical race theory reformulates the old Marxist dichotomy of oppressor and oppressed, replacing the class categories of bourgeoisie and proletariat with the identity categories of White and Black. But the basic conclusions are the same: in order to liberate man, society must be fundamentally transformed through moral, economic, and political revolution. 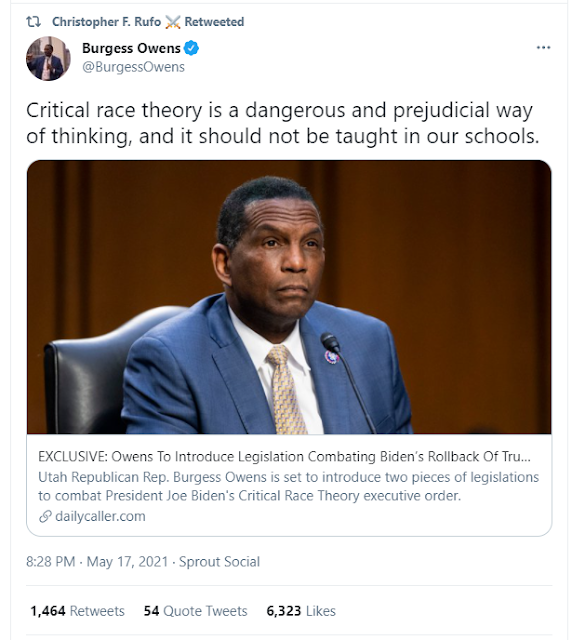 The Atlantic: Where did you first learn of critical race theory? When did you first learn that the federal government had been using CRT, and its principles, in diversity trainings?
Rufo: I began my work on critical race theory with a simple tip: a Seattle municipal employee told me that the City was conducting abusive “internalized racial superiority” training sessions. I did a FOIA request and the resultant story set off a firestorm in the media—and inspired a deluge of government whistleblowers to provide me with documents. 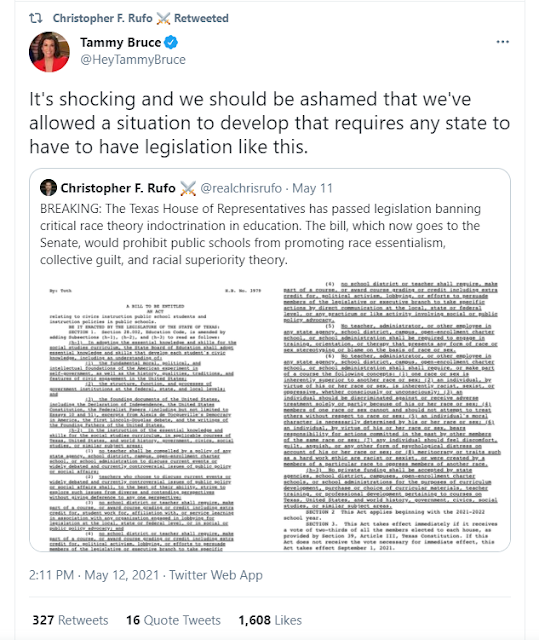 I reported on critical race theory-inspired trainings in the Treasury Department, EPA, VA, FBI, NCUA, Homeland Security, and the national nuclear laboratories. I then did an opening monologue with Tucker Carlson and directly asked President Trump to issue an executive order banning these programs from the federal government. Luckily, the President was watching the show and instructed his Chief of Staff to contact me the next morning. Within three weeks, the executive order was finalized—and thus the real fight against critical race theory began. 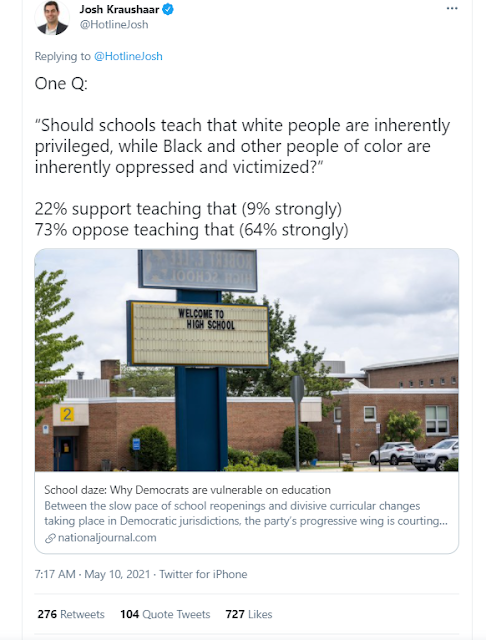 The Atlantic: Several states have introduced bills to ban CRT training—or, at least, requiring theories to be taught in an “objective manner and without endorsement.” Do the bills go far enough? What do you make of the pushback to them?
Rufo: The bills in state legislatures, as well as Senator Cotton’s bill in the United States Senate, are a good start. The rationale of these bills is simple: the government should not be promoting the principles of race essentialism, collective guilt, and neo-segregation, whether they come from old-style racists such as the Ku Klux Klan or new-style racists such as the critical race theorists. 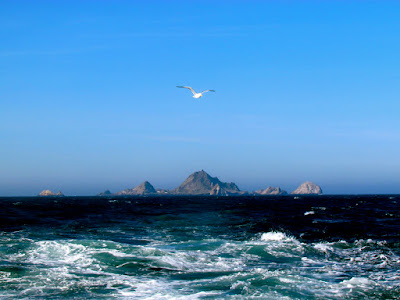 Fair-minded liberals should consider this point: if Congress introduced legislation in 1955 to ban schools from teaching that “any race is inherently superior or inferior to any other race,” it would rightly be considered “progressive”; today, however, so-called “progressives” oppose this exact legislative language because it would interfere with their new racial orthodoxy. This contradiction should make the modern Left think twice—their movement has slid into racial retrogression and, unless they adjust course, will eventually devour itself. 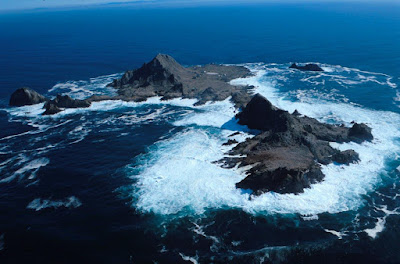 The Atlantic: Have legislators reached out to you for consultation about such bills?
Rufo: I’ve provided my analysis to a half-dozen state legislatures, as well as the United States House of Representatives and the United States Senate. Republicans are beginning to understand that critical race theory is rapidly becoming the operating ideology of our public institutions and presents an existential threat to the American regime.

In their policy prescriptions, critical race theorists such as Cheryl Harris and Ibram Kendi recommend suspending private property rights, installing a federal agency with the power to void any law in the country, replacing the Fourteenth Amendment right to equal protection with race-based “positive discrimination,” and curtailing the right to political speech that is not deemed “antiracist.” This isn’t a formula for reforming the United States; it’s a formula for ending the United States. 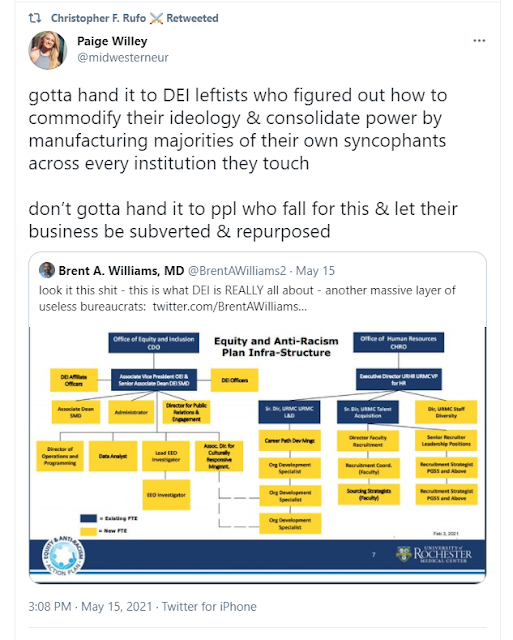 The Atlantic: You’ve been one of the most outspoken voices in opposition to CRT trainings. If there were one throughline you’d hope people take away about CRT and how it is being used in businesses, schools, and the government, what would that be?
Rufo: The moral crime of critical race theory is that it serves the status interests of professional-managerial elites, but offers nothing for poor and marginalized people of any racial background. In fact, if translated into public policy, critical race theory would decimate the very social institutions that are essential for securing the dignity of America’s poor.
As I documented in a paper for Heritage Foundation, the critical race theorists show nothing but scorn and contempt for the two-parent family, entry-level work, and merit-based education, dismissing them as vestiges of patriarchy, capitalist exploitation, and white supremacy. 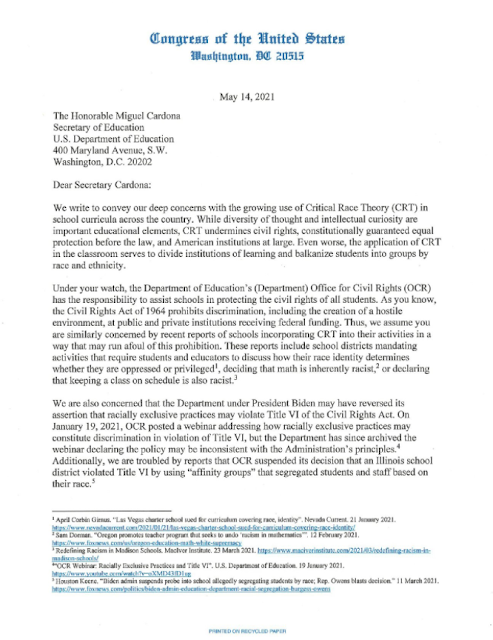 The reality, however, is that the institutions of family, work, and education are the three undisputed pillars of upward mobility, across all racial groups. Critical race theory is big business for ethnic studies professors, diversity consultants, equity apparatchiks, and public school bureaucrats, who never have to suffer the consequences of their own ideas. By contrast, the people in America’s poorest neighborhoods—whom I have documented in a recent film for PBS—share none of the values of their elite counterparts. They are much more grounded, traditional, even “conservative,” than the elites who claim to speak for them. The critical race theorists fashion themselves a vanguard of the proletariat, but like their Marxist forebears, they would only bring tyranny, misery, and impoverishment to classes below them. 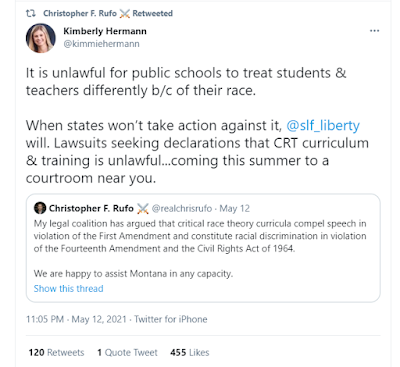 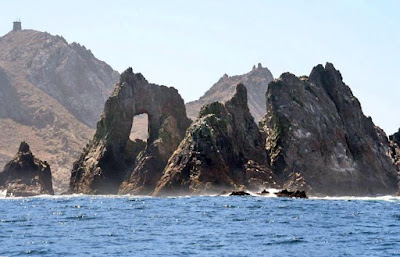 My investigative reporting over the past three months has revealed the rotten fruits of critical race theory in education: a California public school forcing first-graders to deconstruct their racial and sexual identities, then rank themselves according to their “power and privilege”; a Missouri middle school forcing teachers to locate themselves on an “oppression matrix”; a Buffalo public school curriculum teaching that “all white people play a part in perpetuating systemic racism”; a San Diego public school training claiming that white teachers are guilty of “spirit murdering” black children; a New York City public school principal telling white parents they must become “white traitors” and advocate for “white abolition.” 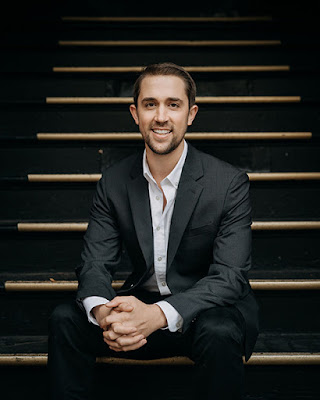 I’ve developed a simple test for academics and journalists covering my work: do they grapple with the substance of my reporting or do they retreat into defending critical race theory as abstraction? So far, it’s been the latter, but the momentum is on my side. My reporting has generated more than 160 million direct media impressions in the past four months and the public is increasingly associating the phrase “critical race theory” with these abusive and outrageous stories. In the end, the critical race theorists can’t hide from the ugly consequences of their own ideas. I’ll make sure of that. 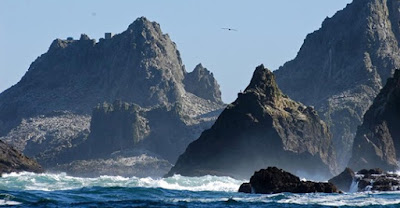 We are winning the war against critical race theory. If you want to help build the momentum, please consider making a $5 or $10 monthly contribution here.
Posted by Regulus at 12:47 AM