Friday Final Day in April 2021 Posting: Tending to This Blog with an Entry Featuring Some Political Commentary & Cartoons On Current Crap Events 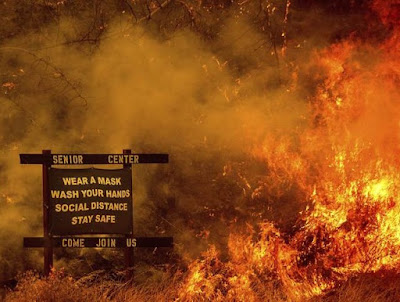 Friday afternoon. Last day of April 2021.
This is another one of my entries that I'm posting because I feel compelled to post something precisely because I view this blog as like a child or a pet dog that needs tending to, love, and affection rather than being ignored. And I don't even want to say that I dread having to post entries because I don't want to hurt its feelings. 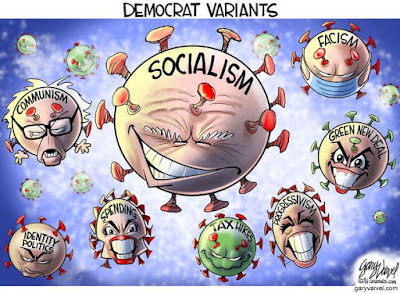 As ever, there are many things I would like to relate involving the digusting Maoist Cultural Revolution and Critical Race Theory-based neo-Bolshevik political revolution that has devoured "Blue America" and that threatens Red America. 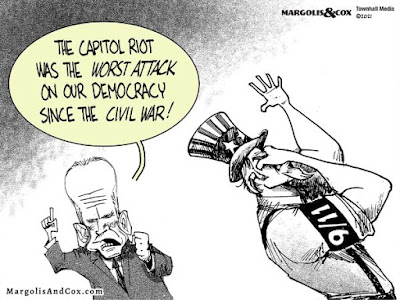 It actively threatens Red America because of a doddering, dementia-addled, angry-crazy man who is president, his regime of vengeful WOKE crazies and Deep State swamp creatures, combined with those paper-thin Democrat majorities in both Houses that exist only to bankrupt, impoverish, terrorize, racialize, polarize, tribalize, vandalize, and barbarize via some unstoppable "Social Justice" battleaxe for the sake of fucking Oligarchy. 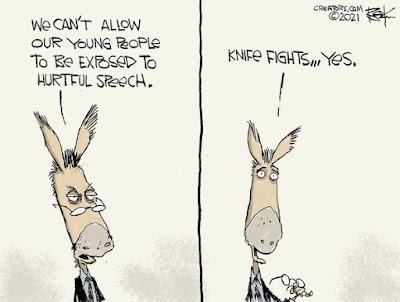 Critical Race Theory and the more generic WOKE lunacy really are the IngSoc of this particular manifestation of what Orwell aptly titled in 1984 as the book-within-a-book, The Theory and Practice of Oligarchical Collectivism. 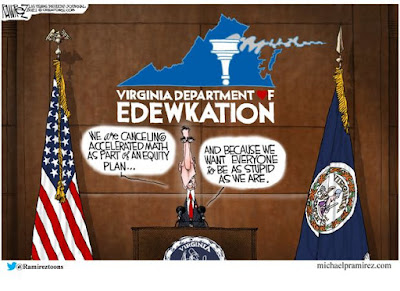 I really hope and pray in the next decade that the United States undergoes some political reconfiguration whereby the Blue and Red States simply split into quasi-autonomous zones under a loose confederation or just outright separate nations. The toxicity and malevolency of Big Media, Big Tech, and Big Academia assisted by the institutional power of the Democrat Party and its quickly-approaching-mass sociocidal Deep State is just too much. 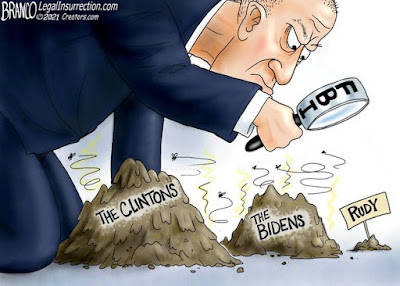 Then there are the young Millennial and Gen Z-based Antifa / BLM shock troops ...
Destructive, ignorant, and completely superfluous in our postmodern, post-truth, post-industrial civilization, they are enraged by their complete powerlessness and often psychotic due to the rage that often fills those whose biological sex and gender identity is confused -- as happens today given the demand of Mass Culture for multiple and undefined genders. (If you don't believe, watch a transexual drag queen when she is not being funny but flips out.) 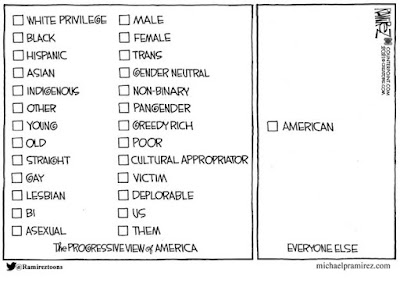 The Gen Z's "education" at both the taxpayer-financed public school level and at the hands of the American Big Academic racket "teaches" is an open landfill of fraudulent and meaningless utopian garbage. It consists of a deranged combination of unworkable Socialist Utopianism and deeply racist reverse racism-as-cure-for-racism. 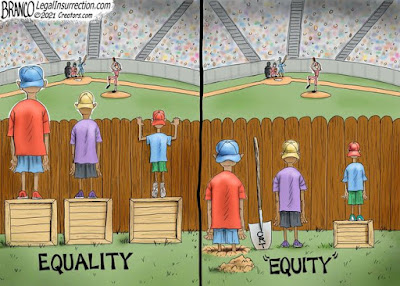 Add to this the bizarro-universe of WOKE neo-Marxist gibberish ("deconstructing the hegemony of cisgendered hetero-normativity in order to interrogate Systems of Power and Oppression") that has resulted from decades of violence to both truth and language itself. 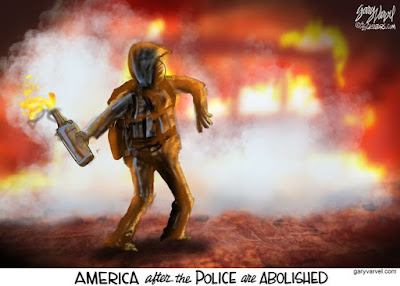 So, lacking any meaningful education and instead historically illiterate to the point of solipsism, they are mind-melded to the zero-dimensional, atomized world of Social Media, this Borg-like superorganism with its Hive Mind has no identifiable past and certainly no future and instead It/They just exist(s) in a weird, meaningless present. 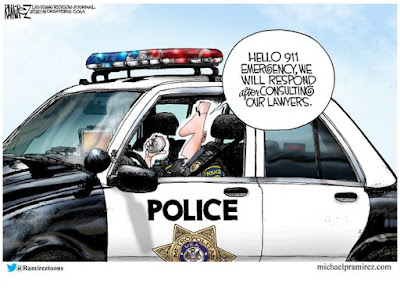 The Democrat Party and Corporate Oligarchy exploits them -- to use a phrase from Marx himself -- "bribed tools of reactionary intrigue" bribed and generalized useful idiots whose endless violence and mayhem are turning once-great American cities into some combination of Mad Mad Beyond Thunderdome, Escape from New York, Logan's Run, and THX 1138. 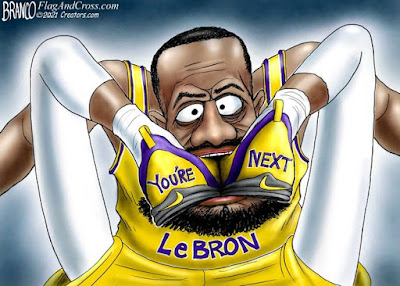 About that, Seattle, Portland, and Minneapolis are lost. San Francisco, though in its forever physically beautiful setting, is a feces-and-used needles-filled encampment of schizophrenic homeless people with Botox Nan as octogenarian Big Sister, properly masked, of course. 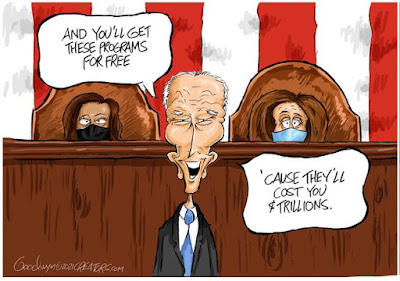 Chicago -- especially its South Side -- is like a dark, violent parody of an American city. New York has reverted to a post-modern, WOKE-infected version of its 1970s bad days. Philadelphia -- I have no idea. It's just always bad. Baltimore resembles Detroit as Detroit existed 20 years ago and is rapidly approaching the Detroit in Damnation Alley.
My former long-time home, Washington, D.C., started at a far higher position for many and obvious reasons. 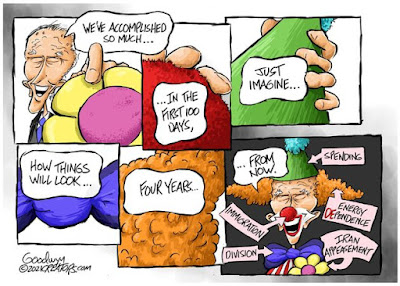 But D.C. is also in serious decline and is run by a borderline-mentally challenged woman who, like all her other mayoral counterparts, welcomes and encouarges a sort of slow-motion, diffuse street warfare against small businesses (the present-day American version of the Kulaks, even those who run lesbian safe space bookstores, WOKE tea-and-coffee shops, and anti-racist Vegan Bento box luncheonettes), the traditional police forces, and regular civilian citizens. 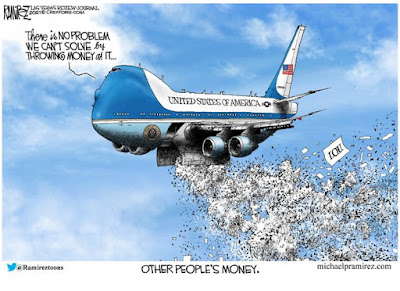 She yearns for a Portlandia-like level of violence in which Antifa thugs terrorize and violently assault drivers -- and when a driver would actually defend himself in the only way open to him, some WOKE prosecutor steeped in the poisons of CRT destroys that person's life while awarding the Antifa with more run-of-the-streets-as-you-please. That's how you terrorize the population, or at least the portion that might cause you trouble. 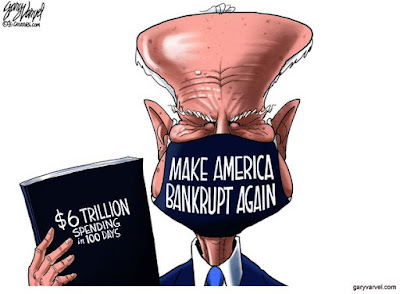 Miami seems to be OK, as near as I can tell. I mean, for a big American city with all the usual American urban pathologies. And here in my new home of Miami Beach, well, basically, it's a tropical seaside resort, so people the visitors here are typically in a good mood, even the boom boom-in-a-zoom zoom hip hop crowd. (Oh, and THANK GOD Ron DeSantis is Governor.) 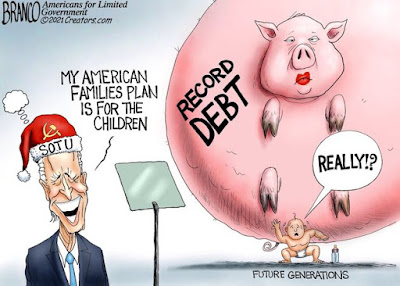 More generally in Miami-Dade and South Florida, people tend to be in a good mood -- or at least not pissed off, paranoaic, and furious in the way of D.C. And they don't tweet and retweet "Social Justice Memes" 23 hours a day with 15 emojis per tweet. 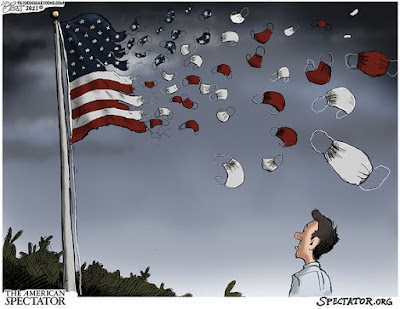 About the only good thing I can say for the current violently spasmodic period is that the stupid Covid situation is slowly but relentlessly ebbing despite the best efforts of the Democrat Health Scare Police State Complex with their Big Media Ministry of Truth to keep it going. 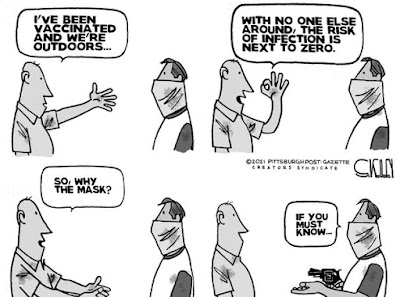 This is true even in Blue States and their cities -- for instance, New York City envisions a "full reopening" by July 1st -- and, of course, it has been the case in certain Red States for many months. By contrast, citizens across Europe and in the UK, Australia, New Zealand, and even frickin' Canada remain under de facto house arrest for this Covid "casedemic" 14 months into it. 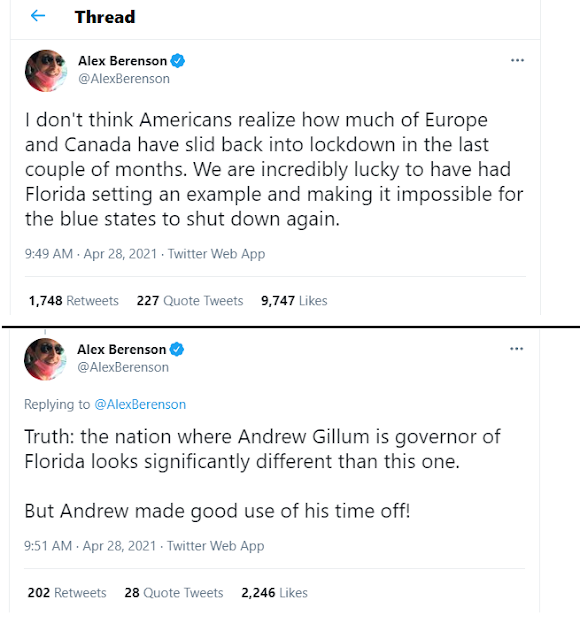 As Alex Berenson noted in a pair of tweets two days ago (compendium screenshot image directly above), thank God for Florida and Gov Ron DeSantis in leading the way and making it impossible for the big Blue States to lockdown entirely aa their totalitarian-minded governors wanted. (Oh, yes, I got my Covid vaccine first shot yesterday.) 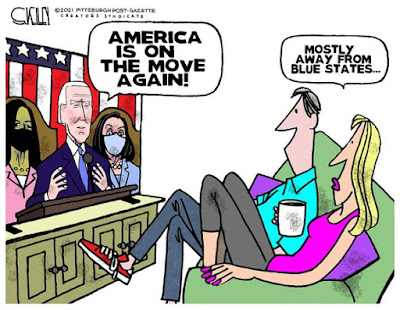 OK, one more entry to follow since I want to separate out this content from a personal update.
--Regulus
Posted by Regulus at 4:52 PM