A Florida Man and His Borderline Scary-Behaving Pet Monkey Walk Into a Liquor Store ... 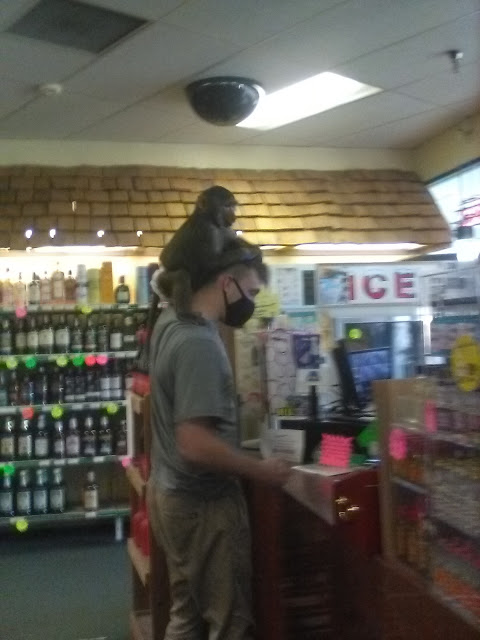 Upfront, let me say that this entry's title basically wrote itself using the famous cultural meme: "A Florida Man ..."
So, on Monday, my dad and I went to a Winn-Dixie in Flagler Beach -- well, I guess it's technically Palm Coast located just off Rt 100 -- for some grocery shopping. Thereafter, we went to a liquor store in the same strip mall.
I'm not going to say the name of the liquor store.
There was a young man in the store making a purchase at the register. He had with him what I momentarily thought was a dog, until I realized it wasn't a dog. Or a small child. Rather, it was a monkey (a primate). I captured the two pictures that you see in this entry.
The man claimed it was a young baboon, but I can't help but think it was actually a young Rhesus macaque.
The young man told the liquor store clerk some patently absurd story that he had just been to Africa. It made no sense. My dad said that guy had showed up with some young woman -- age uncertain -- who disappeared before he went into the store. I did not observe this. 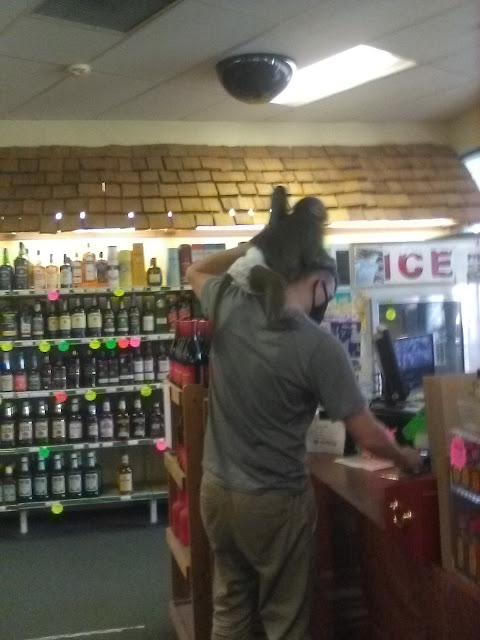 The creature was wild, climbing noisily all over him and squawking and screaming. It had on a little diaper, which was adminttedly cute, but the creature itself was not cute. Instead, it was clearly quite strong and somewhere on the verge of its adolescence. FWIW, I genuintely perceived it as a threat and didn't want to be anywhere near it.
However, by the time I realized what was happening, the man and his monkey were between me and the door.
As for the liquor store clerk, whereas 19 out of 20 people would have freaked out and certainly not served him, he was completely non-plussed about this bizarre situation and carried on a normal conversation about the monkey.
When the young man left, I asked the clerk if he was concerned that the monkey would have been him (as in, on the face). His emphatic response: I have a fuckin' gun.
OK, then. Not sure it works that way with a monkey.
I'm going to try to post another entry tonight. I head back down to Miami Beach tomorrow.
--Regulus
Posted by Regulus at 9:58 PM