The Empire Strikes Back: WOKE Totalitarianism Is the Big Media Battle-Axe of the Ultra-Privileged Overclass Against the Revolting Public -OR- No Formative Center, Just Performative Show Awesome-looking Iguazú Falls on the border of the Argentine province of Misiones and the Brazilian state of Paraná
*******
I feel compelled to call attention to this Glenn Greenwald piece [link embedded] as a launching point into a political-themed entry on my reconceptualization of the current WOKE Cultural Revolution lunacy as, in fact, a weapon of the Overclass:
Criticizing Public Figures, Including Influential Journalists, is Not Harassment or Abuse
As social media empowers uncredentialed people to be heard, society's most powerful actors seek to cast themselves as victims and delegitimize all critiques.
Greenwald's piece focuses on the New York Times "reporter" Taylor Lorenz and her self-victimization declaration. Let me say upfront that it's hard to overstate what malevolent influence is Taylor Lorenz. She embodies all that is sociopathically narcissistic, indeed, nihilistically solipsistic in the American Millennial and Gen Z generations (with the help, of course, of the Baby Boomers who refuse to go away). 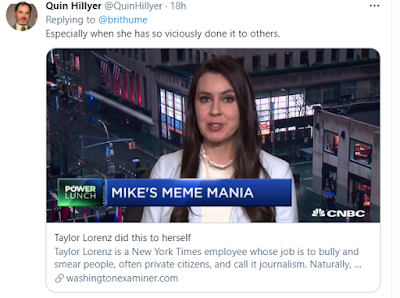 For the uninitiated, Taylor Lorenz is the ultra-WOKE "tech and cultural reporter" for the New York Times who, while existing Borg-like on the internet all day, engages in relentless identity subterfuge to gain access to "closed" online formums in order to employ her character assassination method to destroy of peoples' careers and lives with her ethically depraved, endless, soul-crushing WOKE gotcha games involving their weird and ever-shifting language infractions and hence thought crimes.
The results of Lorenz's methods are so frequently misleading as to be outright false even while the WOKE Supremacist lunatics and cultists who behind her who run "The Paper of Record" enable here. What's more, her falsehoods and misrepresentations often involves non-public figures who cannot fight back except through the ponderously legal system thought crimes.
Her tried-and-true method is the one so familiar to present-day illiberal left journo-advocates of her ilk whereby they level endless accusations of racism. To any legitimate criticism of their ethical depravities, she declares it to be be "abuse," "harassment," and even "violence" (verbal or actual are the same to her sort) in order to shield themselves from the weaponization of virtual (dis)information to destroy real lives all while claiming she is the High Priestess Victim of the Church Perpetual Self-Serving Self-Victimization.
This is precisely how the Overclass -- of which she is most certainly a member -- maintain their suffocating Elite Privilege. Steeped in a toxic miasma of entitlement, historical illiteracy, pathological narcissism, and cossetted inability to handle any of life's complexities or ugliness, the Overclass deploys its privilege via battle-axe of Critical Race Theory and WOKE politics to police language and control thoughts in order to maintain its grip on power in a time when that makes no longer makes any sense or is really even possible.

Laura Ingraham adroitly noted last night and it has helped me reconceptualize how the Overclass today is implementing its Reign of Cultural Terror and Fear. Above is the Laura Ingraham commentary, and she is spot on.
Tucker Carlson, who is always in the crosshairs of a Twitter social justice mob and Big Media cosseted egomaniacs, has also been focused on this. Thank God for Laura and Tucker.
Now, I wasn't going to mention Oprah's "s(h)itdown interview" of Meghan Markle or her cuckhold husband, Harry, but it turns out (and this shouldn't have been a surprise) that Meghan and Harry as cosseted idled multimillionaire parasites living their unreal existences are very much part of this Ultra-Elite Privileged class who generate their own self-serving reality as needed, no matter the destuction it causes anyone else. That's because the ONLY thing that matters to them is the self: The have no psychological concept of a world beyond them or ANY obligations they might to it given their status in society. 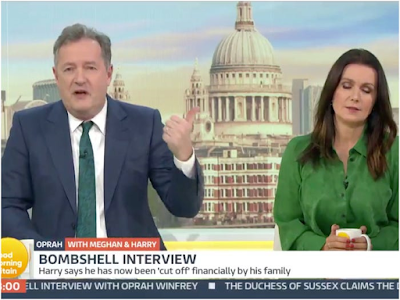 Hahaha ...
Above: Moments before Piers Morgan stormed off the set of "Good Morning Britain" -- apparently, when the weatherman was yelling at him over his comments about the "absolutely disgraceful" interview. In Britain, where some weird entity called "Ofcom" can police "harm and offence rules" on TV -- i.e., whatever causes the WOKE to shit little bits of social justice in their STOOL -- is "investigating" the matter.
The Meghan & Harry interview -- or to quote Piers Morgan, that "diatribe of bilge" -- has become a super illustrative example of how all of this works. She's even implicitly accusing Queen Elizabeth of virulent racism because their son didn't get a title. Of course, the two proudly walked away from their Royal Life in The Firm. But that didn't stop Meghan making all her ugly accusations that fit so well with the current degenerate WOKE Culturally Totalitarian zeitgeist in the US and the UK. (Unfortunately, the UK has wholeheartedly adopted this garbage. Other parts of Europe have recoiled from it, especially France. 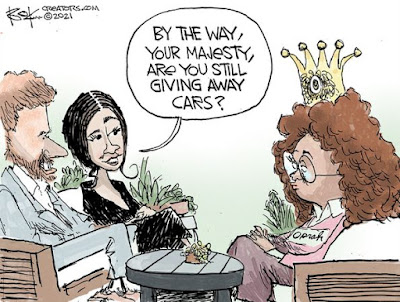 Let's stay a step back, though, and acknowledge that there is a much deeper issue here. It gets into the thesis of Martin Gurri’s deeply insightful and pre-Trump era prescient 2014 book The Revolt of the Public and the Crisis of Authority in the New Millennium, the title of which calls to mind for me José Ortega y Gasset's amazing 1929/30 work The Revolt of the Masses.
Matt Taibbi wrote about this book in one of a pair of new Substack pieces, the second of which is an actual interview with Gurri. The pieces are behind a payroll (and I'm not going to try to link to them), but I have a year-long subscription to Taibbi's site, which is well worth it. In the first one, he wrote: 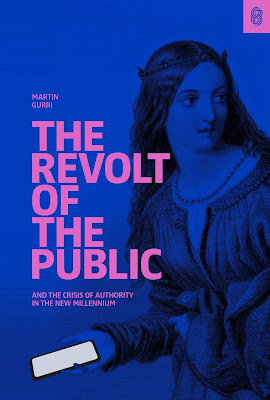 The thesis of "The Revolt of the Public" is that traditional centralized powers are losing — have lost — authority, in large part because of the demystifying effect of the Internet. The information explosion undermined the elite monopoly on truth, exposing long-concealed flaws.
Many analysts had noted the disruptive power of the Internet, but what made Gurri unique is that he also predicted with depressingly humorous accuracy how traditional hierarchies would respond to this challenge: in a delusional, ham-fisted, authoritarian manner that would only confirm the worst suspicions of the public, accelerating the inevitable throw-the-bums-out campaigns. This assessment of the motive for rising public intransigence was not exactly welcomed, but either way, as [Arnold] Kling wrote [in the book introduction], “Martin Gurri saw it coming.”
The only remaining institution in America that is no longer empty and performative ("mere platforms for elite self-expression and personal branding") but still meaningful and formative is the U.S. military.
The salient point for me in this entry is that the way hierarchies in the United States and even the UK are responding in order to reestablish their authority -- i.e., how the Empire is Striking Back -- is to institute a brutally repressive WOKE-minded reign of terror even while the purveyors of this in Big Media have adopted the very tactics of those who have overthrown all authorities.
As Taibbi writes: "At the New York Times, once the most intractable, pig-headed hierarchy in the media business, editors are terrified of making decisions, and the organization has reinvented itself as a kind of giant Slack chat, taking aim at this and that, with lines blurring even between subscribers and staff."
This is precisely why the New York Times proudly employs such destructively but self-unaware staff such as Taylor Lorenz, and it is why it sends reporters to stalk Tucker Carlson's children in the bushes around his house.
As for Winfrey herself -- or rather, OPRAH!! -- I'd like to say a few words: She has caused more societal damage over the past 35 years than any other celebrity of her sort with her perpetual juggernaut that leaves sociocultural narcissism and infantilization in the wake of wherever it and she steamroll. 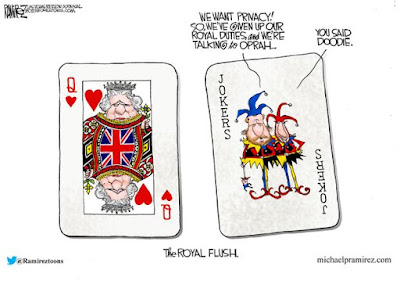 To reiterate, the Meghan & Harry interview has quickly (and, I would say, very deservedly) gotten caught up in -- and is a symbol of -- this Overclass extreme Elite Privilege. What's more, it conceptually clarifies the CRT/WOKE victimization method used by this set to smother dissent while setting up itself as the permanent victim worthy of only cossetted adoration.
It's fucking disgusting. And it's destroying society through both totalitarian terror and rapid fraying of social bonds, which is why it is long-term highly unstable. 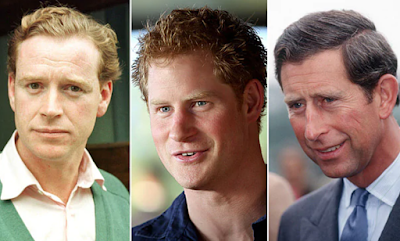 As for Harry and Meghan, Queen Elizabeth should strip them of their titles. They aren't part of that family or its role whatsoever. And let's not forget that there is strong circumstantial evidence that Harry isn't even Charles' biological son and is only half-brother to William, future King of England.
And on that note, I'm ending this entry.
My plan is to post another entry over the weekend. However, my internet is disconnected on Monday. And then I leave for my Miami Beach move on Wednesay and, if all goes well, Dear God, I'll be there a week from now.
--Regulus
Posted by Regulus at 6:46 PM