Slowly and Unintentionally Uneasily Into My New Miami Beach Natural & Human Eco-System and Other Unsolved Mysteries of Life, Televised Or Not 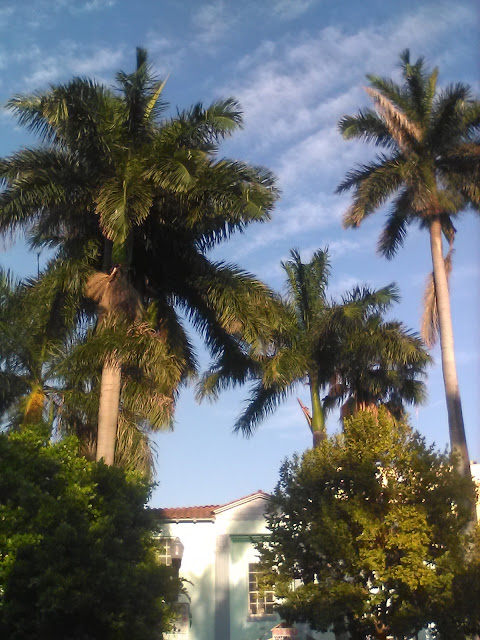 (Cuban or Florida) Royal palms (Roystonea regia) growing in a yard on a sidestreet in South Beach, Miami Beach, Fla., 6:24 p.m. March 24, 2021
*******
Upfront let me say that I wrote about half of this entry last night. I didn't complete and post it until Friday mid-to-late afternoon. 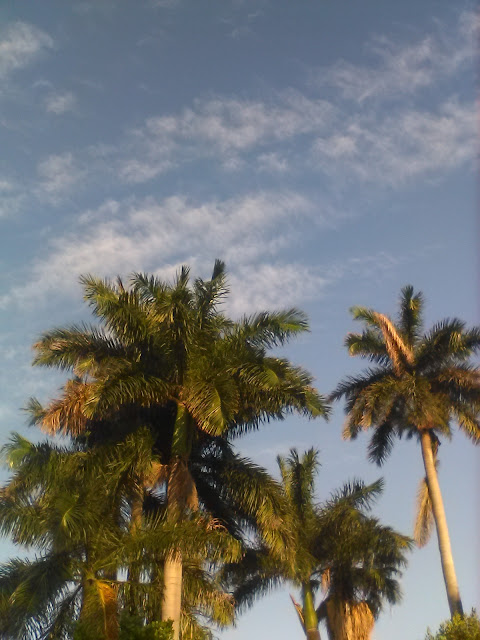 Above: The same cluster of royal palm trees -- correction, MONOCOTS -- as in the lead image. I think these royal palms are the visually lovely. I find it amazing that so many types of palms can grow in both South Florida and Southern California despite a six to twelve times difference factor in annual rainfall. These include the royal, the king, the queen, and the Mexican fan. 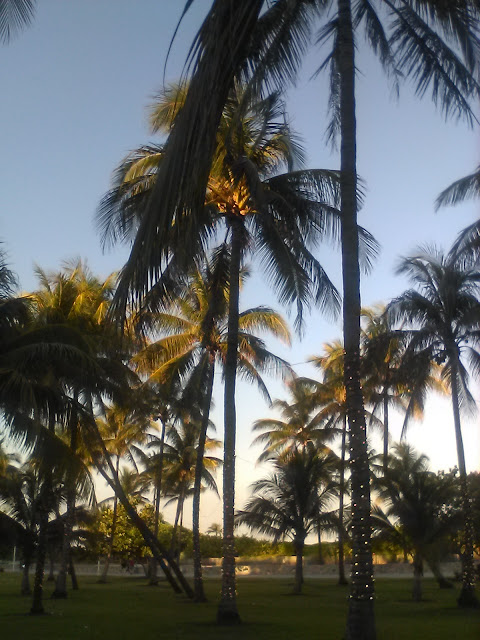 Only the coconut palm -- pictured above along Ocean Drive in Miami Beach's entertainment / Art Deco district at dusk -- seems to require a lot of rainfall, or at least a warm and humid climate. They are highly intolerant to cold.
*******
Not feeling well tonight.
This is due to a combination of excesses, in particular, drinking, in this new Miami Beach climate and ecosystem -- human and natural -- that in many ways is a different planet whence so recently I came. 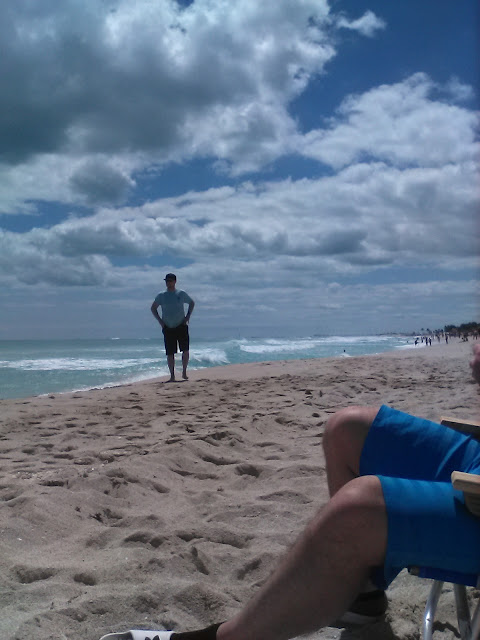 Today (Thursday) was actually the first day in my new Miami Beach life in which I lived about as normally as I would have back in D.C.
It was a day that involved working from what now is my home office, going to the grocery store (a Publix about a mile away), doing a load of laundry, and retiring early and inside in a dimly and softly lamp-lit, air conditioned small apartment in Miami Beach. 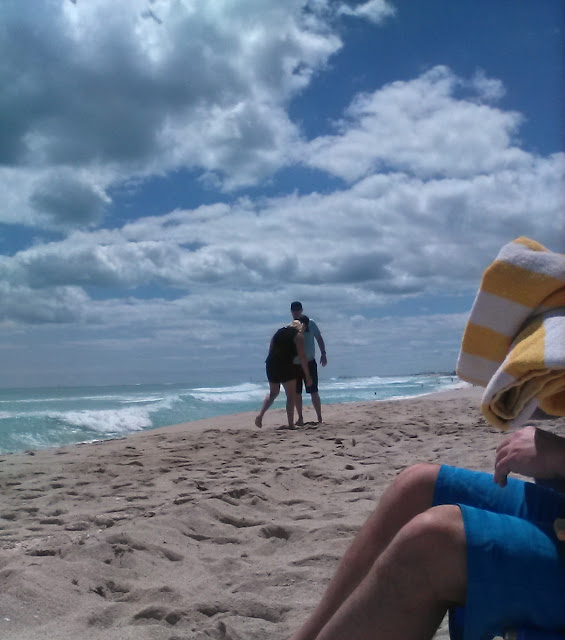 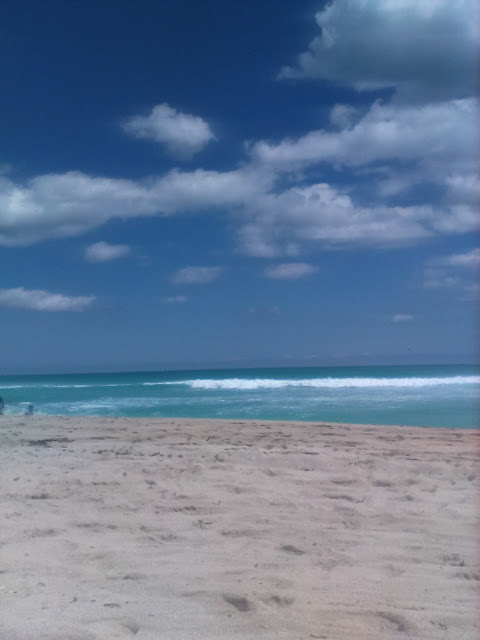 The past week has been emotionally intense in a rollercoaster sort of way for me. It also featured on my part out-of-control spending on far too much drinking and, ironically, insufficient eating and hydrating. Indeed, I pretty much got sick last night and was whacked out in a headachy, queasy daze today. 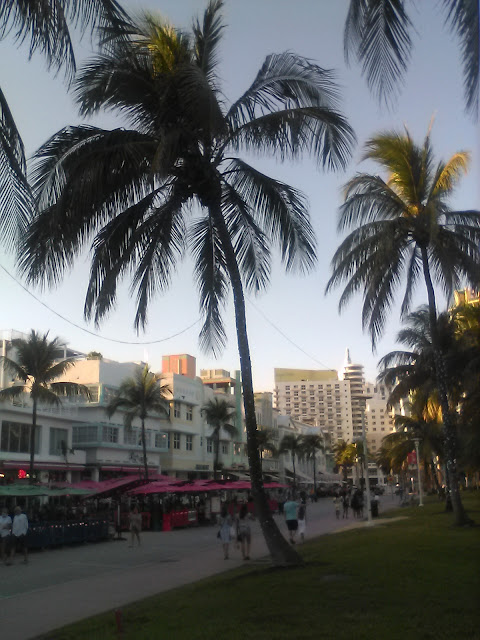 Tonight, I've gone through three cans of the cherry-flavored Bubly sparkling water tonight not to mention two of those small cans of Dr. Pepper. As an aside, Seltzer (fizzy) water drinks with interesting flavors has been one of the better developments of this unhappy era. 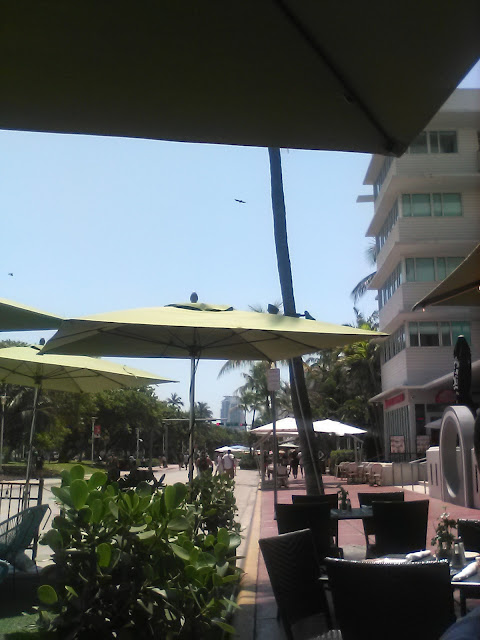 All the brilliant sunlight, heat, sand, and salty water -- i.e., the radically different natural ecosystem down here than in WOKE-fundamentalist, pole-up-your-ass D.C. -- didn't exactly help, either. However, that too is significantly the fault of the drinking. 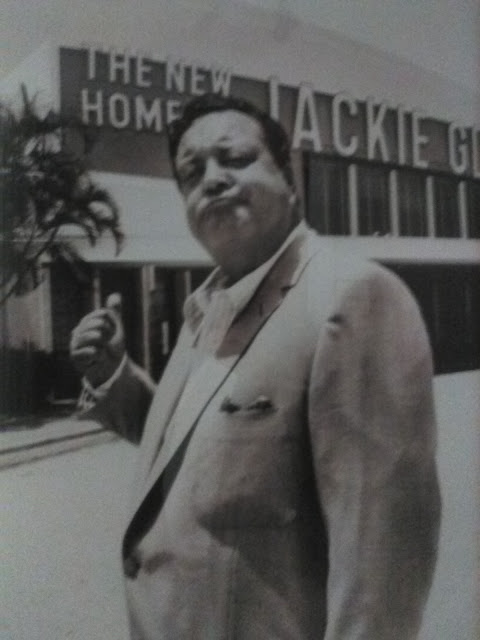 Above: A picture of the Great One himself, Jackie Gleason, taken in 1964 here in Miami Beach. This picture was on the wall outside the hotel room in the Majestic where Gary stayed earlier this week. 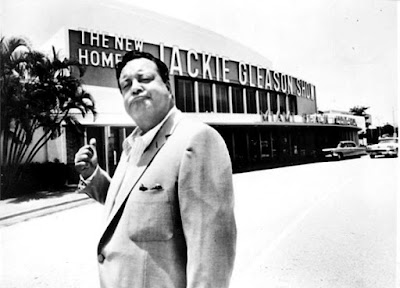 Above is a better image of the same picture. It was taken outside the venue where The Jackie Gleason Show was filmed for a period of time. The venue -- formally known as The Fillmore Miami Beach at the Jackie Gleason Theater -- is part of the Miami Beach Convention Center complex. It located at 1700 Washington Avenue about seven blocks from where I live.
*******
I've been worried how last (Wednesday) night ended -- not because anything identifiably bad happened (well, it wasn't ideal, either) the short distance from here down by South Pointe but because I am loaded with fear and worry that I will simply repeat all the crap that made my D.C. social life such shit in all the pre-Covid years gone by. 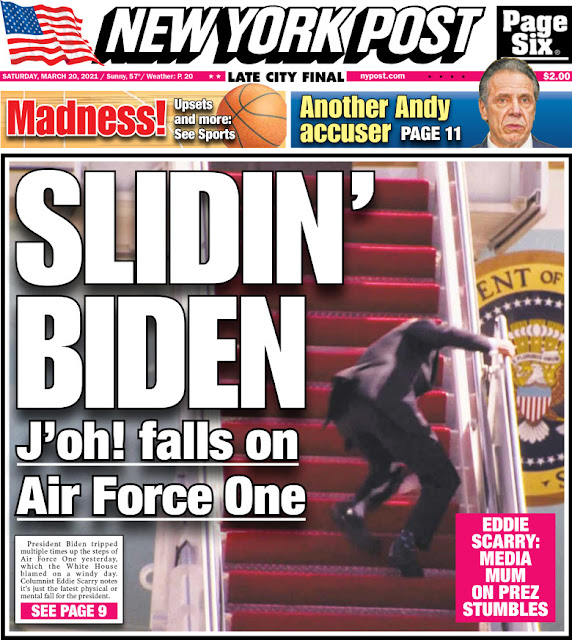 Look at him: Tim Conway couldn't have fallen up a flight of stairs better than this. And that cackling you hear is Kwanzaa Kamala.
*******
So, here I am tonight in my strange new little home in a strange new place, ensconced inside in the dimly lit, air conditioned whirling darkness, overloaded with emotion and a strange empty feeling, while watching television.
I will be visiting my dad -- who lives about 200 miles north of here just north of Flagler Beach -- in April. As for my mom, well, I may never see her again.

As for television, well, alas, I simply cannot get MeTV or Antenna TV no matter how many scans I run with my Samsung television (the big one that came with the furnished apartment) using that little digital antenna that I took with me from D.C. This means no more Perry Mason unless I can figure out how to get MeTV.
Of note, MeTV has an online streaming version but you have to download a special kind of browser or browser extension called Wave, and I can't really risk that since this is my work computer. Antenna TV doesn't even offer that option.
However, I can get Cozi-TV (local over-the-air channel 6.2 in Miami), so that's one-third of what had been my trio of loved night-time TV networks.
That being the case, I can still watch The Munsters, Frasier, The Nanny, and Will & Grace. 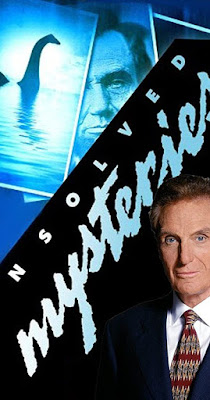 I was able to get 22 over-the-air or digital-over-the-air channels with the scan. In addition, because I have internet, Samsung TV Plus provides what I counted as about 160 channels -- the vast majority of which I would and will never watch. Among this melange of channels is Channel 1078, FilmRise - Crime (or TrueCrime).
Again, that's not really my cup of tea, but it does show the series Unsolved Mysteries, specifically, the "classic" episodes during its original ten-year run between 1987 and 1997 on NBC.
Of note, as based upon what The Keeper of All Knowledge states, Unsolved Mysteries is now in its fourth incarnation as follows: CBS from 1997 - 1999; Lifetime in 2001 and 2002; Spike TV between 2008 and 2010; and following a decade-long hiatus, on Netflix since 2020 in what is notionally season 15. 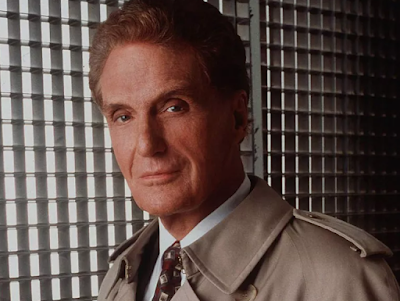 Robert Stack really was an excellent host / narrator -- playing up the film noire raincoat-clad detective in an earnest, gravelly baritone voice that was also ever-so-slightly campy, and the whole effect just worked so well. I miss him. 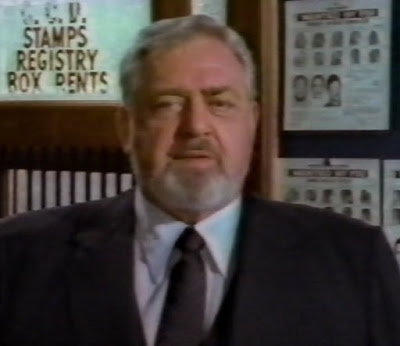 Interestingly, Raymond Burr (of Perry Mason legendary fame) was the original host when the show debuted on Jan 20, 1987 in what was a seven-episode set of specials running intermittently until May 1988. (It's amazing in how many TV cultural elements from Godzilla to Perry Mason to Unsolved Mysteries does the great Raymond Burr have a role.)
From what I heard elsewhere, apparently, Burr was too expensive to keep as the host / narrator, so the show went to Karl Malden for the next two specials -- aired on May 25 and Sept 24, 1987. Thereafter, Robert Stack became host for the fourth special aired Nov 29, 1987.

Unsolved Mysteries' regular weekly run -- listed as season 1 -- started in 1988 with Stack, who stayed with the show until its Lifetime run before he passed away in May 2003. His co-host for that run was actress Virginia Madsen, who I last mentioned in this blog just about six years ago in a Dune-related entry that has proven rather popular (in terms of random visitors).
The Spike TV incarnation was hosted / narrated by the late Dennis Farina, a long-time Chicago police officer-turned actor. In the latest incarnation, there is no host and no actor reenactments, which sort of totally ruins the show even if it is sparking useful tips on long-dormant cases.
Also according to Wikipedia, there have been to date 593 episodes including the pre-season 1 specials with the most recent on Oct 19, 2020 (part of a set of six episodes released that day).

One of the episodes I watched tonight was from season 2 (1989-1990) first aired Feb 14, 1990 and included the segment on the still-unresolved murder of a very young, rookie police officer named Stephen (Steve) A. Sandlin in the small and impoverished New Mexico town of Mountainair in May 1988. Mr. Sandlin is pictured at left frozen in time forever young from circa 1985.
Originally classified as a suicide, his death was later reclassified a homicide, but it remains unresolved. Patrolman Sandlin was only 21 years old -- and had been an officer for just two months. His parents were extensively interviewed for the episode, as was the then-police chief, who was a problematic figure in the case.
I think I prefer the paranormal stories rather than the unsolved murders.
The actor who portrayed Sandlin was actor Brett Kamerman, whose IMDb page is limited and who has, I think, this YouTube page featuring various old clips of him from the 1980s and early 1990s. 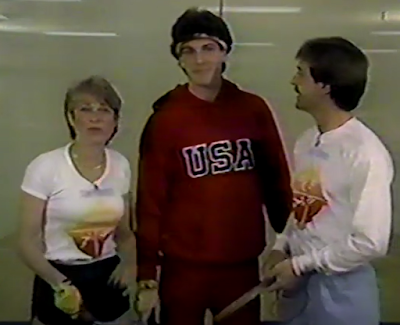 Above: Screenshot from some a local TV show in New Mexico (Albuquerque?) called "PM Magazine" probably circa 1985 featuring Brett Kamerman as the young, tall, handsome fellow who had won the show's "Best Looking Man in New Mexico" contest. This is the man who would later play Sandlin in the Unsolved Mysteries episode...Yeah, there's a lot goin' on in that picture. 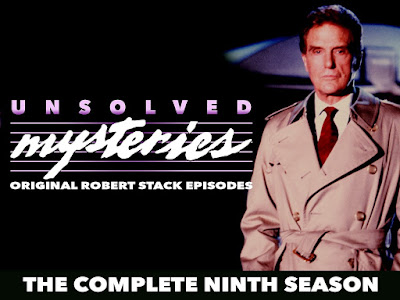 I mention all of this because I liked Unsolved Mysteries back in its 1987 - 1997 run. I also recall that my mom really enjoyed the show, which got me interested in it, in particular, the paranormal segments.
Looking back across 25 to 30 years, today the show just reminds me of that vanished teenage and 20s period of my life spent, variously, in New Jersey and Maryland. And the electrifying, chill-up-your-spine highly synthesized soundtrack of the show now is more poignant to me than anything else. 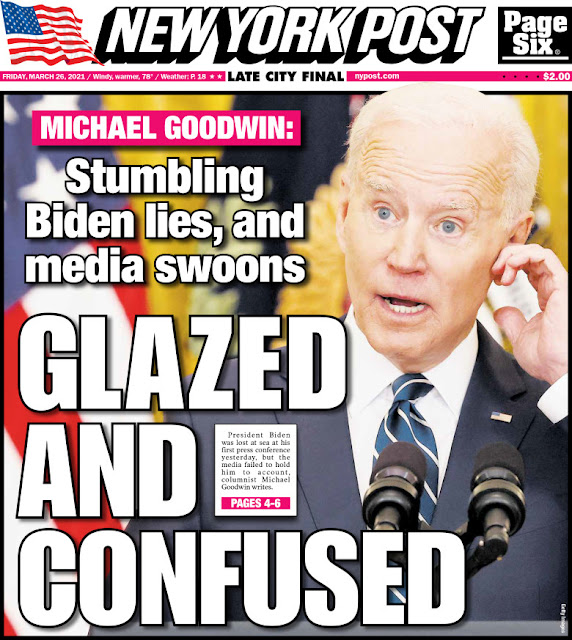 Oh, and I still have a copy of the old Mad Magazine's frickin' hilarious spoof ("a dog barks for no apparent reason") entitled Unsolved Miseries. It is now with my uncle in South Amboy in a box of photos and other family memorabilia that I sent to him before my move.
OK, I'm going to wrap up this entry. 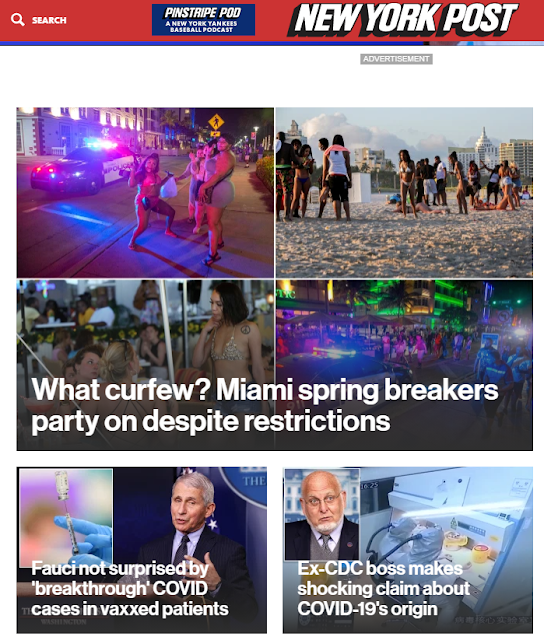 Above: The headlines in the New York Post online this afternoon. Note the ones on the Miami Beach Spring Break situation. The article link is here. A few comments on this ... 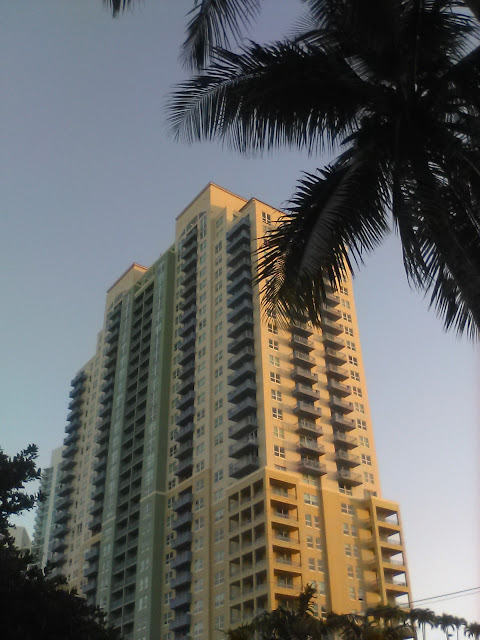 Actually as I am actually down here living right in this spring break party zone, I can clarify a few things: One, the curfew is 8 p.m. to dawn on Thursday, Friday, and Saturday nights. Two, it is only in the "Entertainment District" between 5th and 16th Streets and from the beach west three blocks, i.e., Ocean Drive, Collins Ave, and Washington Ave. Third, it is dramatically quieter than it was when I arrived a week ago. I think I arrived at Peak Spring Peak. 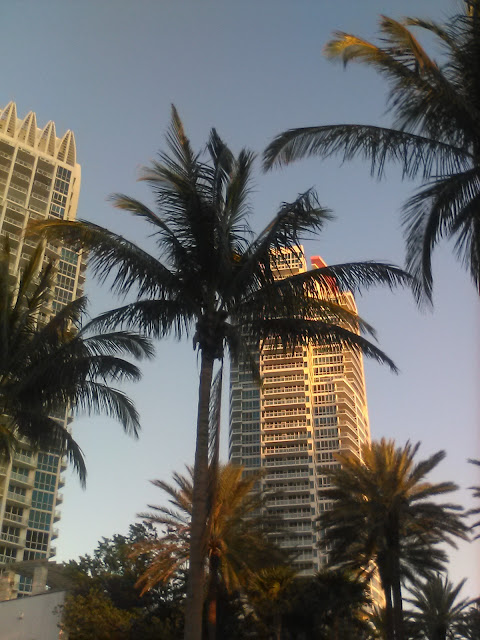 So, yes, there was much bedlam and mayhem -- and, yes, some of it quite ugly, completely feloniously illegal, wholly unacceptable, and requiring serious punishment. HOWEVER, the impression being given that the entire City of Miami Beach is engulfed in this is simply a Big Media lie designed to inflame and partially driven by that totalitarian-mindedness of the Illiberal Left that can't abide the loss of Covid control. 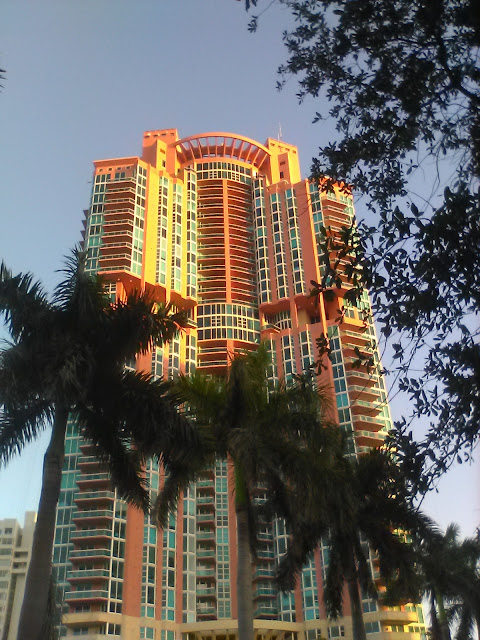 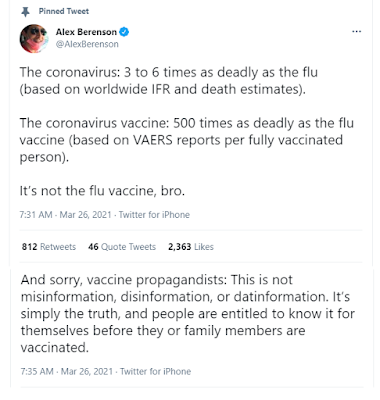 And since I brought up Covid -- and the societally and human relationally destructive reactions to it, especially in ostensibly "liberal" places such as D.C. that personally forced me out of there and into this new Miami Beach life -- I would like to post directly above and below two sets of Alex Berenson tweets on where things stand with Covid and the vaccines. 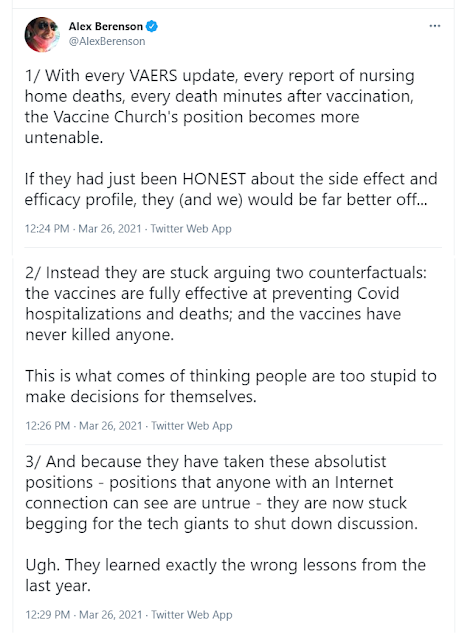 Let me be clear, though: I fully intend to get whatever of the three vaccines is offered by Miami-Dade's health department once I am eligible. I've already signed up for its email list. 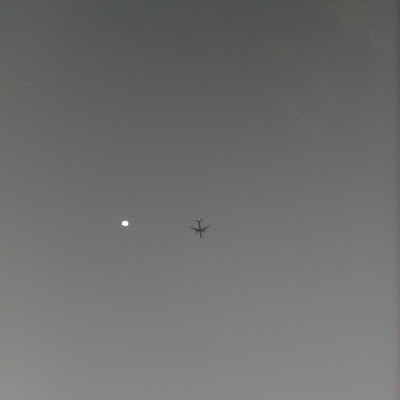 OK, now I am going to wrap up this entry. My next planned entry probably won't be until Monday or Tuesday night.
--Regulus
Posted by Regulus at 4:37 PM