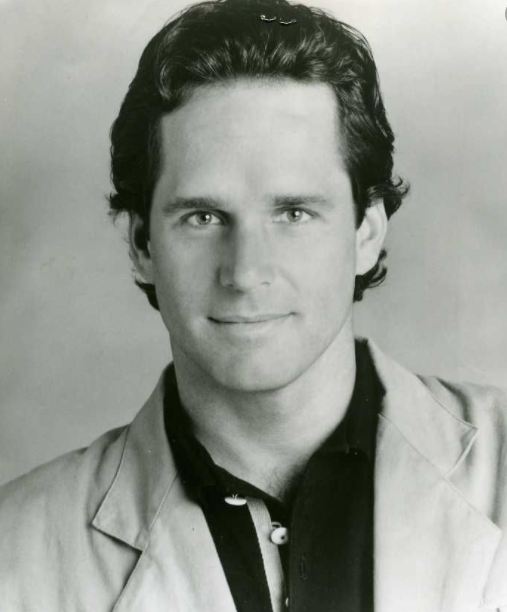 For this entry, I have decided to post a series of images of actor Gregory Harrison, arguably best known for his roles in Trapper John, M.D., and Falcon Crest, two CBS network television series in the 1980s. 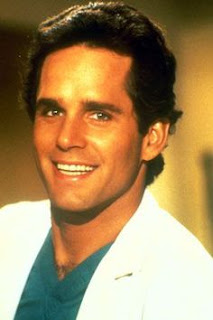 The reason I'm posting the images is because I thought -- well, still think -- that Gregory Harrison was a studly, hunky attractive man back in his vigorous 20s and 30s youth.
Indeed, I remember as a teenager finding him very appealing when he costarred on Trapper John, M.D., as Dr. George "Gonzo" Gates. For some reason, I remember a scene in one episode in which he was holding an infant, crooning "Hush Little Baby, Don't Say a Word."
It turns out he played the role of Logan 5 in the very short-lived series Logan's Run that was a spin off from the awesome 1976 film of same name starring Michael York as Logan 5. I don't remember that TV series -- I was just 7 to 8 years old when it was on -- but I can say that Logan's Run is not a movie that even makes sense as a TV series. 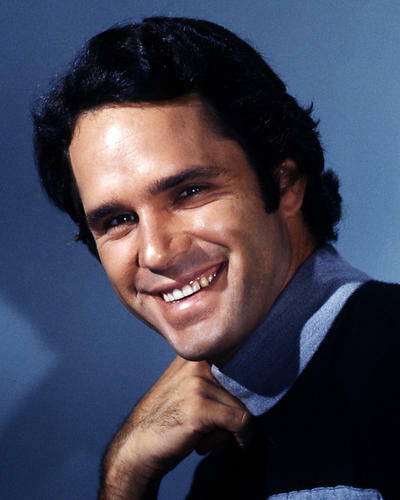 Fast forward to March 2021, and Gregory Harrison is now 70 years old and still married to his first wife, actress Randi Oakes. He also has four children to include three daughters by Randi Oakes and an adopted son who appears to have had some serious legal issues (at least according to Google when you look up the son's name).
Interestingly, Harrison was born in the little resort-harbor town of Avalon on Santa Catalina Island, largest of the Channel Islands, where his father was a boat captain. 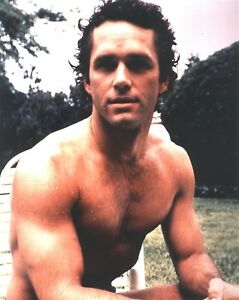 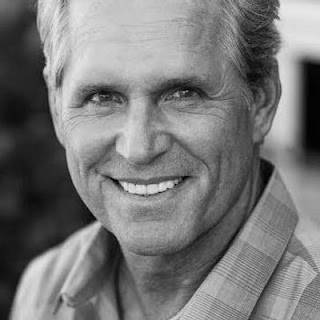 Gregory Harrison has a twitter account -- handle @TheRealGregoryH. At left is his current Twitter picture and directly below is a cropped version of his banner image. But his twitter page content is just boring standard-fare leftwing vapidity, the sort endlessly emitted by the HollyWOKE celebrity set.

Basically, it features the usual liberal-to-illiberal political virtue signaling with rabidly anti-Trump / anti-all-Republican retweets, as suffocating on the sanctimony as it is low in information or understanding. Basically, it's Debra Messing-lite, but from a 70-year old man who certainly should know better and not seeking to boost his WOKE social credit score. 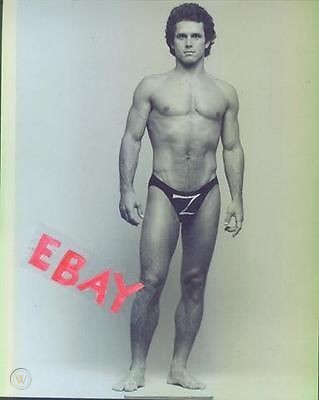 Maybe the speedos were too tight back then.
Having said that, I don't want to detract from Gregory Harrison professionally: He has a substantial and varied body of work spaning now five decades, and his youthful beefcake notwithstanding, he obviously has actual talent as an actor. What's more, he's still married to the same woman after 41 years and raised four children including a possibly troubled adopted one. 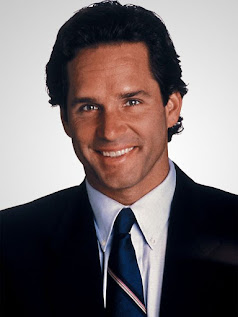 With all that in mind, what follows is the content -- last updated Jan 12, 2021 -- from Gregory Harrison's Wikpedia page, but omitting the tables of his filmography to include film, television films, and television series. He is still performing in the soap opera General Hospital, now in its, like, 529th year. Not included are the inline links and superscripts referencing footnotes. That page is linked here. 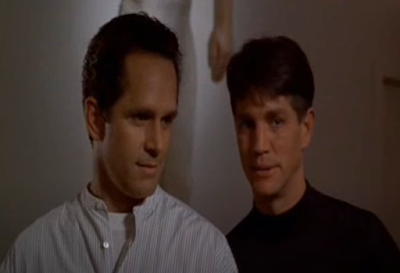 One last item: Gregory Harrison had a major role in the 1996 movie It's My Party about a gay man dying of AIDs who has a final farewell party and commits suicide -- the idea he died with dignity. Eric Roberts plays the man in question, Nick Stark, while Harrison plays Brandon Theis, his estranged lover. 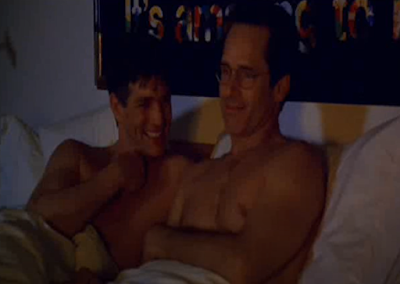 Above: A screenshot from It's My Party of Roberts and Harrison as Stark and Theis in bed together. Honestly, as a middle-aged gay man myself, it's kind of weird to me having two straight men doing that. 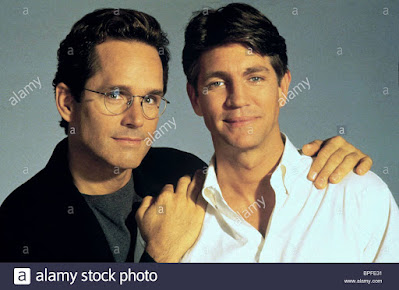 OK, I'm signing off my part of the entry here. My next posting will be in a few days. I'm starting my final full week here in D.C. ahead of my move to Miami Beach, and I still have a number of things to do.
--Regulus
**************
Gregory Harrison
From Wikipedia, the free encyclopedia 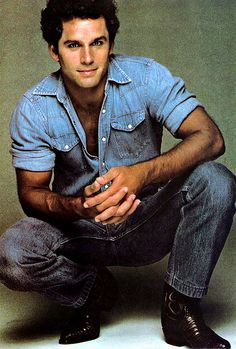 Gregory Neale Harrison (born May 31, 1950) is an American actor. He is known for his roles as Chandler in the 1987 film North Shore, as Dr. George Alonzo "Gonzo" Gates, the young surgeon assistant of Dr. Trapper John MacIntyre (played by Pernell Roberts) on the CBS series Trapper John, M.D. (1979–86), and as ruthless business tycoon Michael Sharpe in the CBS series Falcon Crest (1989–1990). Since 2015, he has played Joe O'Toole, father of Oliver, in the Hallmark Channel expansion films of Signed, Sealed and Delivered. 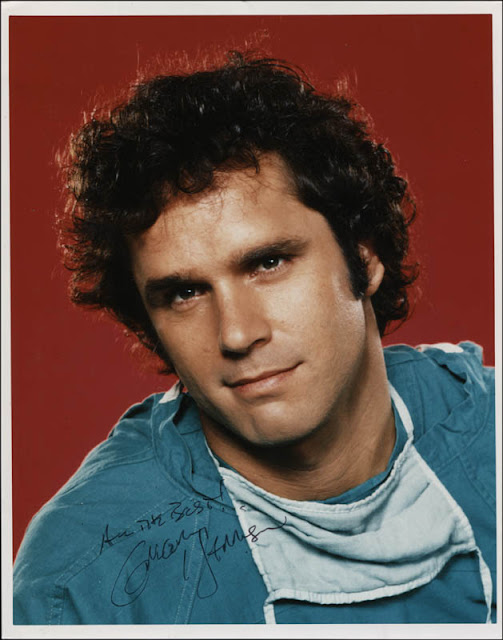 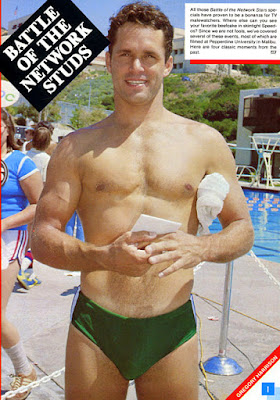 Harrison was born in Avalon, California, in 1950, the son of Ed, a ship's captain and poet.
Harrison served for two years in the United States Army during the Vietnam War era as a medic.
He was the title character on the 1977–78 science fiction series Logan's Run, after which he played the role of Levi Zendt on the 1978 NBC miniseries Centennial. 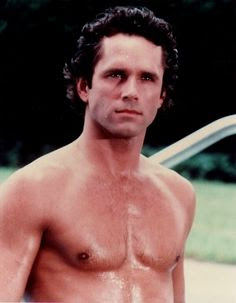 In 1979, after years of being a relatively unknown actor, Harrison finally won the role of surgeon Dr. George "Gonzo" Gates on Trapper John, M.D., starring opposite Pernell Roberts on the medical drama spun off from M*A*S*H. Harrison had guest-starred on an episode of M*A*S*H the year after Wayne Rogers departed from his role as Trapper John on that series.
Harrison remained as Gonzo on Trapper John until the middle of the show's seventh season, when he decided to leave for other ventures. 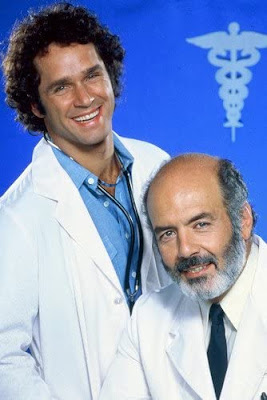 The series continued for several more episodes without Harrison, but concluded its run at the end of the 1985–86 season.
Harrison had been a fan of Roberts' role as the eldest son of the Cartwright family on the series Bonanza (1959–1973).
The two remained friends until Roberts' death from pancreatic cancer on January 24, 2010.
Harrison's later role as stripper John Phillips in the 1981 TV movie For Ladies Only made him a favorite with women and gay men in the 1980s. He spoofed that role in the 1986 miniseries Fresno where his character appeared shirtless at every opportunity. Fresno was also a spoof of the prime-time series Falcon Crest, where Harrison became a regular three years later in the final season (1989–90). 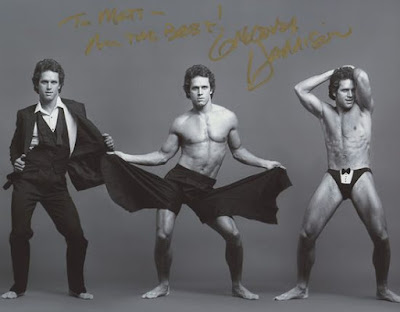 Yes, Gregory Harrison in a stripper sequence image -- which is autographed to someone named "Matt" ... 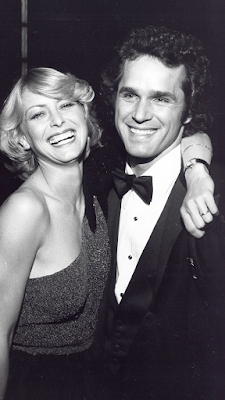 As Falcon Crest ended production in early 1990, the series' parent studio, Lorimar Television, cast Harrison in its upcoming CBS sitcom The Family Man, from producers Thomas L. Miller and Robert L. Boyett. The series, which premiered that fall, featured Harrison as a single fireman father raising his four children with the help of his father-in-law, played by Al Molinaro.
Despite a few attempts by CBS to help it build an audience, The Family Man was cancelled after one season.
Harrison later joined the cast of NBC's Sisters for the 1994–95 season, playing Daniel Albright. In 1996, he starred opposite Eric Roberts in It's My Party, a film based on the true events of a man diagnosed with AIDS who planned a two-day party to say goodbye to his friends and family, and who then took his own life with pills. 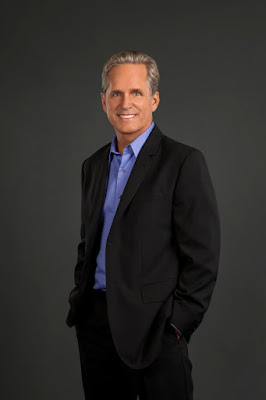 He also starred in the WB Network's Safe Harbor and One Tree Hill and has made guest appearances on other shows such as Touched by an Angel, Judging Amy, Reunion, Joey, Law & Order: Special Victims Unit, Drop Dead Diva and Hot in Cleveland.
He has played the lead in a touring version of the musical Chicago and was the male lead in each film of the Au Pair trilogy.
He also appeared as Benjamin Stone in the Broadway revival of Stephen Sondheim's Follies and created a role in the original Broadway production of Kander & Ebb's Steel Pier. In 2011 he had a guest-starring role as a doctor on ABC's Body of Proof.
Personal life 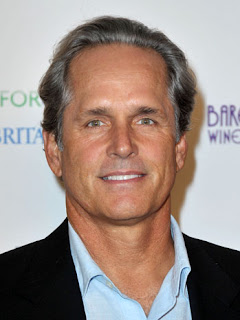 Harrison has been married since 1980 to actress Randi Oakes. The couple has four children, three girls and a boy. He lived in Gold Beach, Oregon, for 15 years; as of 2007, he lives in Eugene.
Harrison became addicted to cocaine during the 1980s and was able to break the addiction with the help of the Betty Ford Center.
Posted by Regulus at 1:25 PM