On the Cusp of My Move to Miami Beach and Final Weekend After 20+8 Years In and Around D.C., Some Social Snippets from the Past Seven Days 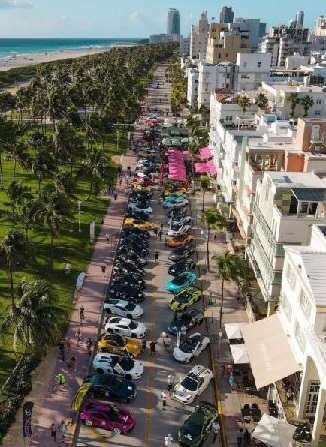 Aerial (drone?) morning view looking south along Ocean Drive in Miami Beach, Florida, my soon-to-be new home
*******
Saturday mid-to-late afternoon on this my planned last weekend living in Washington, D.C., after many, mostly unhappy, dissatisfying years.
By this time next week, I should not only be in my new apartment in Miami Beach, but I should have my internet hooked up -- and ready to continue my "remote" federal contracting job from up here down there.
My dear friend, Andrea, who is going down with me on the auto train is staying in Miami Beach at a hotel I booked for her for three nights. What's more, Gary is flying down on Saturday afternoon, so the two should overlap that night.
Finally, there is a chance that Tim will also be down there next weekend doing his own thing. To be determined. Three quarters of my closest friends down there -- with only Chester not there.
As it is, Chester and I are supposed to meet tomorrow so that I can discard my crappy two little tables and chairs, none of which I am taking, especially since the apartment is furnished (at least, I am paying for a furnished unit).
I've been meeting other friends in the past week or so as a goodbye. 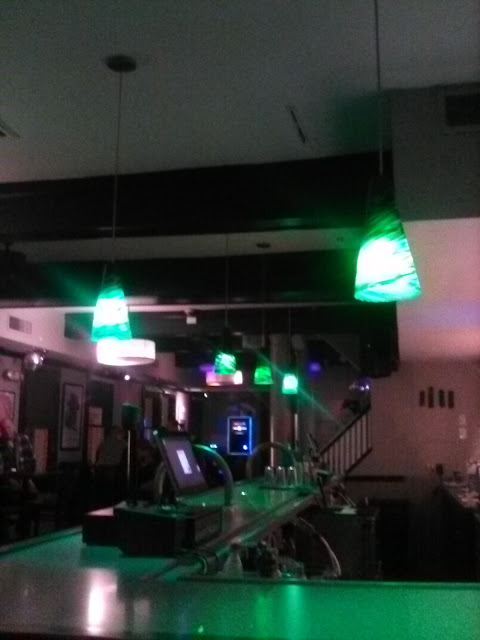 Last weekend, I had a lovely lunch at Union Street Public House with Unique on Saturday. On Sunday, I had a nice outdoor lunch at Tony & Joe's in Georgetown at Washington Harbour with Aaron and Kevin. I hadn't seen Aaron in about 18 months, and as for Kevin, it had been at least 8 years (back in the Pitty Shil era).
On Tuesday night, I went on the (awful) Metro up to Chevy Chase (Friendship Heights) to meet Tim after a medical procedure he had. We rode the Metro back to Dupont and went to La Tomate, where we had a very nice dinner. And the music was lovely in a lovely restaurant setting. It was all so civilized.
We started out at Sette Osteria kitty-corner to it, but the upfront service with the masks and latex gloves combined with the overly load club music blasting and exacerbating my stress headache just nixed that. As it is, I'm very glad we went to La Tomate. Jonathan the one-time GM was there. 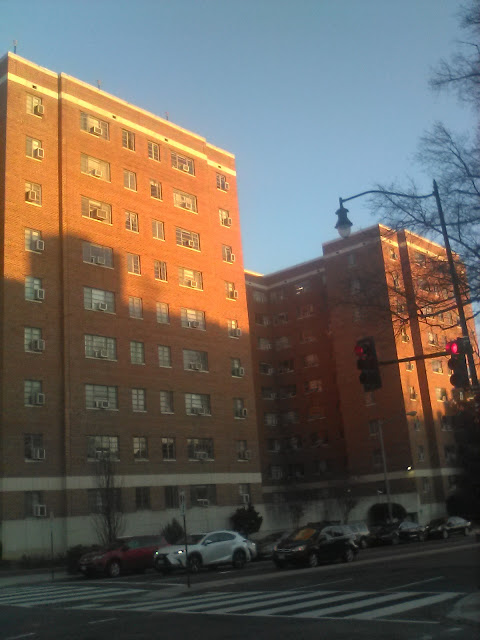 On Thursday night, Brian C. and I went to Sequoia in Georgetown, where we had a great time despite shitty service. I'm really glad Brian and I got back in touch -- with the help of Chris -- in the very last days of my 28+ years in the D.C. area including 20 in the District proper. Also, Brian sent me the Miami Beach picture that is the lead image in this entry.
Of note, it was exceptionally warm on Thursday with record daily highs at KDCA, KBWI, and KIAD -- each 79°F. Today is partly cloudy and mildish with temps around 58°F.
Last night, my former supervisor and friend, Laura, and I had a really fun time at Ted's Bulletin in Arlington (Ballston area) at an outdoor table (one NOT in one of those plastic bubbles). I'm getting the sense from her that post-mass vaccination, people like her (who really do decide things things) aren't going to live in a Biden / Fauci / MSNBC Blue State "new normal" lockdown forever. 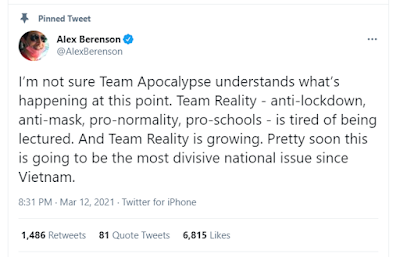 The Alex Berenson tweet (screenshot) directly above captures this well.
Alex Berenson also had the best response to that bizarre Biden speech the other night in which he pretended to dictate how Americans will celebrate Independence Day a little under four months from now. His tweet is below along with an image of the speech I added: 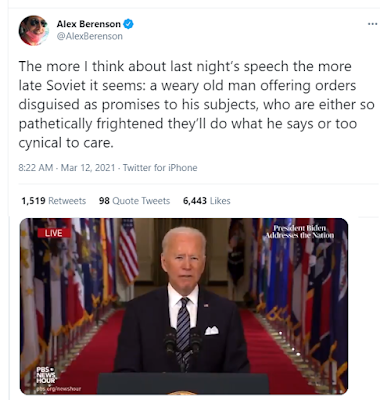 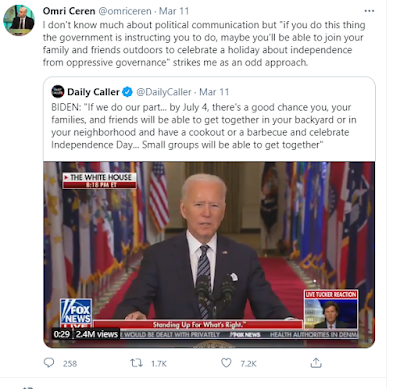 As today, my coworker friend, Matt, is coming into D.C. this evening and our intention is to go to Georgetown / Washington Harbour area -- perhaps Sequoia outside or Tony & Joe's outside.
This is only the second or third time I've seen Matt in the past year of stupid Covid. Matt lives up in Gaithersburg and the sense of it up there is intense. Let's just leave it at that.
Looking ahead, I lose my RCN internet after Sunday -- so on Monday and Tuesday, any blog posting will have to be from my office. I also need to send back the modem and power cord. But I won't even have a table at that point for the computer, monitor, lamp, or television, all of which I intend to take.
Andrea's inlaw's vehicle is large enough to accommodate what I am taking. We're actually packing up most of the stuff Tuesday night -- I reserved the loading dock and freight elevator for that. Basically, it consists of eight or nine large plastic bins containing clothes, bedding, books, papers, and toiletries. I have virtually NO kitchen ware. Oh, and of course, I have one bin's worth of plush stuffed animals to include all those hippos and monkeys (see image below for them in all their glory). 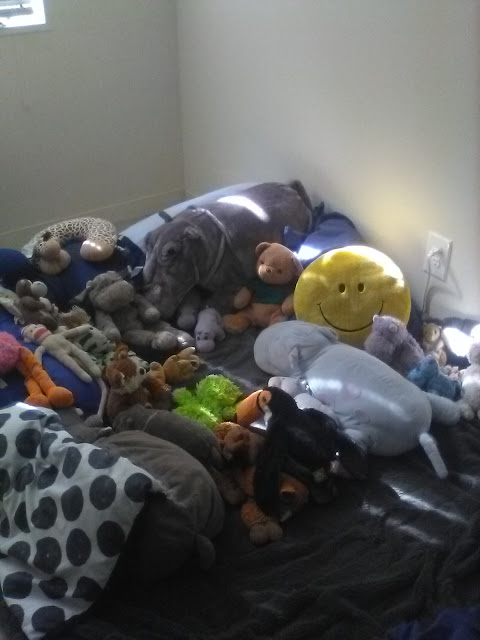 I was going to mail ahead of me the single bin's worth of books, but Andrea thinks that's unnecessary.
I actually depart on Wednesday, March 17th. St. Patrick's Day. And one day after the one-year anniversary of the start of the Covid insanity. (The mass social unrest began on May 25th. The two combined formed the dealbreaker for me of living in D.C.)
The train is scheduled to leave from Lorton, Va., at 4 p.m., and it is scheduled -- barring the usual freight train-related delays when traveling south of D.C. -- to arrive at Sanford at 9 a.m. the next morning.
Wearing a mask for that long is going to be a real pain, but the train should be relatively thinly crowded given crowd size limitations. The train is supposed to have Wi-Fi. We'll see.
Yes, I'll literally be on a Midnight Train to Georgia -- or at least through it and its peaches.
And if all goes well, we should arrive in Miami Beach mid-to-late afternoon on Thursday, March 18th. 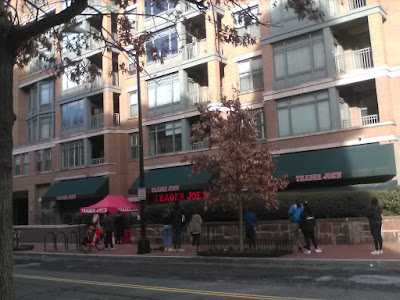 Above: A "socially distancing" line outside the Trader Joe's on 25th Street in Foggy Bottom on Feb 27, 2021. Assuming half those people were tweeting social justice memes while in line, the above image unintentionally cpatures in one image everything intolerable about D.C. in the present period and why I can't live here any longer.
*******
I guess I could go on a lot longer reflecting on my life over the years in Washington, D.C., and why it was fundamentally a failure in multiple ways, but not in this entry.
OK, signing off for now. I honestly don't know how my blogging will be in the coming week. I would lie to write one or two more entries, but I also really don't want the last entry from D.C. to be some random political diatribe. So, to be determined.
--Regulus
Posted by Regulus at 5:51 PM