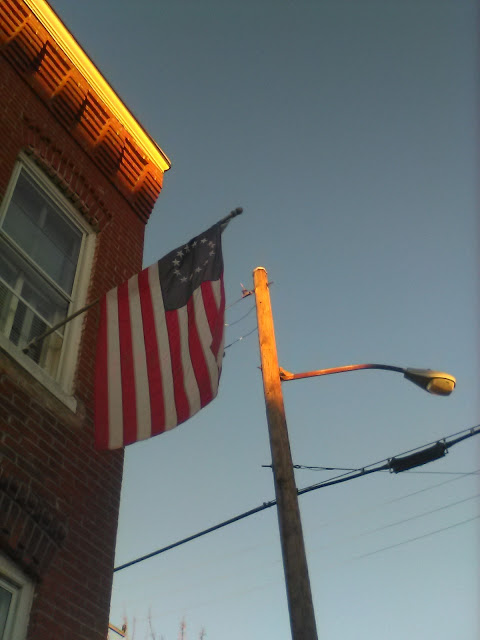 
Of note, the July 2018 Google street view image appears to show that very same Betsy Ross American flag flying from its second story perch on that corner building.
*******
OK, I'd like to post the following Tucker Carlson interview of Parler CEO John Matze -- at least before YouTube / Google removes it -- about the situation for Parler as it attempts to find a server entity in the wake of the criminal racketeering actions by the Google / Apple / Amazon Big Tech oligarchical juggernaut.

As Matze explains in the interview, the Big Tech oligarchs and actively sabotaging by openly threatening any entity that even suggests it will do business with Parler.

Parler had jumped to 20M users when the coordinated attack occurred using the pretext of the events at the Capitol last Wednesday.
It is a coordinated attack by a grotesque axis of Big Tech oligarchs, Big Media Borg merchants of hate, and illiberal left totalitarian wannabes steeped in the noxious, America-loathing poison of CRT-infused WOKE fundamentalism.
In this toxic miasma, we have an American political and cultural illiberal Left that demands, actively seeks out, and celebrates smothering, suffocating censorship.
And, as I've said before, Big Media "journalists" are "journalists" in the way that firemen were firemen in Bradbury's Fahrenheit 451. 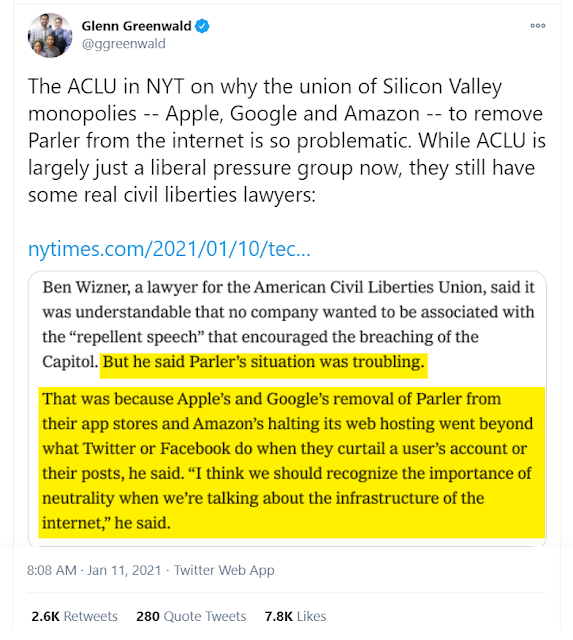 Above: As part of this entry, I'm featuring a series of screenshots of Glenn Greenwald tweets from earlier today on this topic including a couple compendium tweet images.
*******
But with dementia-addled Pervy Joe and his Kwanzaa Kamala Co-President set to assume office in 9 days, and with Dems in control of both Houses of Congress -- yes, very narrowly but in full running-amok control -- to include the lower chamber under that desiccated, bilious Black Widow Nancy Pelosi -- there is no federal recourse other than the courts. 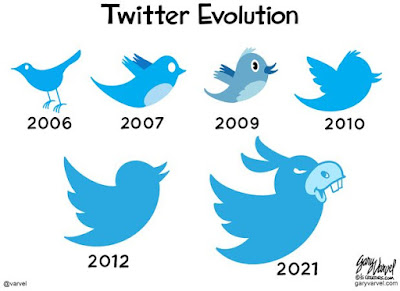 We're basically just left with Glenn Greenwald and a few others on the left to argue against this.
Things aren't much better on the right.
The Republican Party elites of the Washington Consensus set, by and large, are either terrified or genuinely appalled and revolted by their Trump base voters, so there's no salvation to be had there. That's actually want Tucker Carlson talked about on this Jan 8th show that I featured in this entry and that I'm reposting below:

This censorship will increase in the months ahead with a full-bore attempt to "cleanse" the regular web of any vestige of Trump support or Trump supporters -- with the very act of being a Trump supporter redefined as "white supremacy" worthy of cancel culture social vaporization. 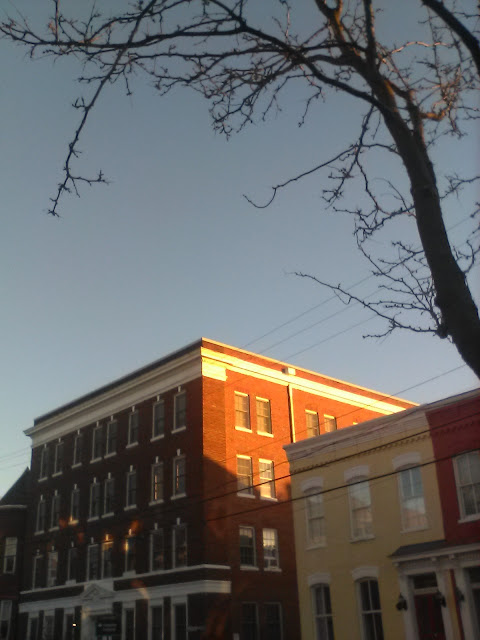 About the federal court angle, Parler has filed suit against Amazon Web Services (AWS) in but any such case that goes before an Obama-appointed judge will run into the same bizarro-world obstacles involving this or that P.O. box that the computer store in Delaware has encountered in its lawsuit against Twitter. 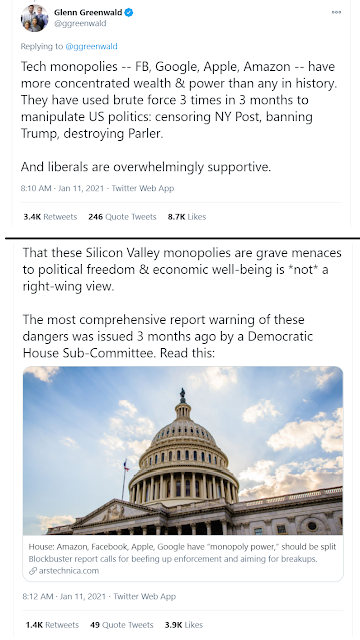 And even if we got all the way up to a Supreme Court case, we still have to worry about John Roberts, now that he's effectively a wussy liberal, and his likely "penumbras, formed by emanations" horseshit that Big Tech is flagrantly illegal abusing its Section 230 protections.
Here is an article on the suit. I'm waiting for Red State's legal analysis guy, known only by his handle Shipwreckedcrew, to give his analysis.
Twitter's stock plunged 12% today before partially recovering -- and the company, itself now a supra-state actor beyond the reach of American law, was deeply offended by what upstart social media platform Gab tweeted, mocking what was at that point a $4B valuation loss: 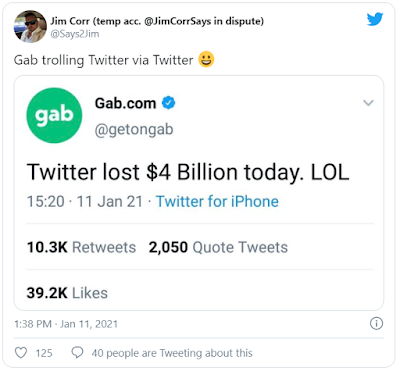 Apparently, the tweet (see image above) from Gab's Twitter account was deleted -- by whom or what isn't clear.
Remember: WOKE religio-secular fundamentalist millennials and transgendered Gen Z sorts with their pronoun fluidity (the kind who make up the workforce of Twitter) do not handle well being mocked for their social justice ways. 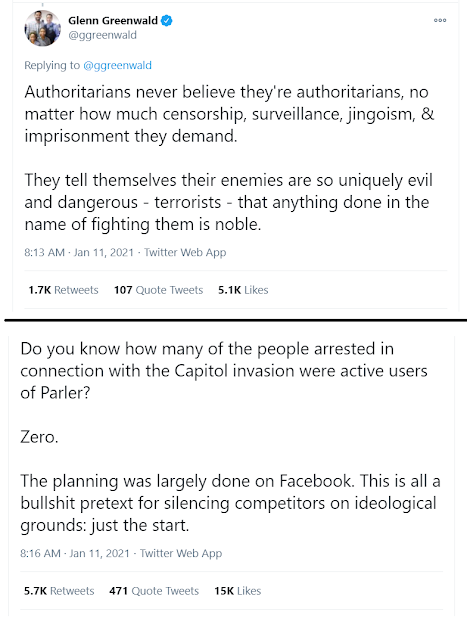 In Borg-like fashion, any mockery of one sets off the I/We social media Collective and bad things happen to the offending "user" via deplatforming and cancel culture social vaporization. The WOKE Borg Collective cannot be stopped by mere human isolates.
Of course, if any one of them is cut off from the Collective, they just burst into tears and writhe around on the floor screaming and bawling about "hetero-normative cis-gendered systemic racism" until their Social Media synapses have been reestablished. 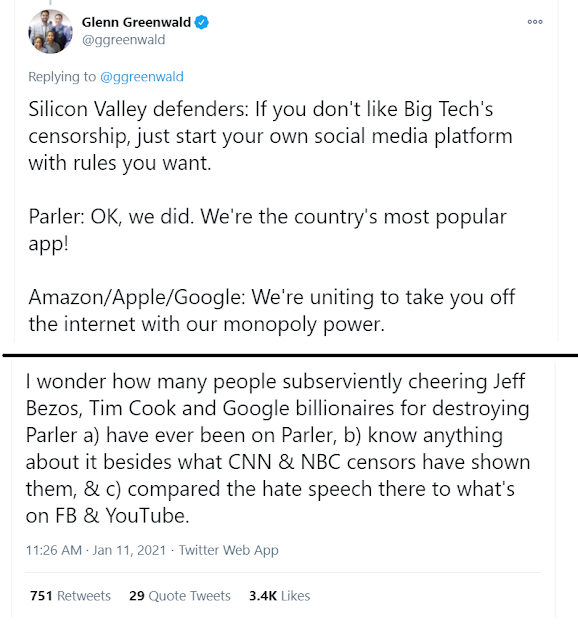 I should also note that there has been a lot of chagrin expressed by other world leaders at Trump's deplatforming -- including German Chancellor Angela Merkel. Remember that Germany has far more restrictive rules related to "Free Speech" than the United States historically has had. 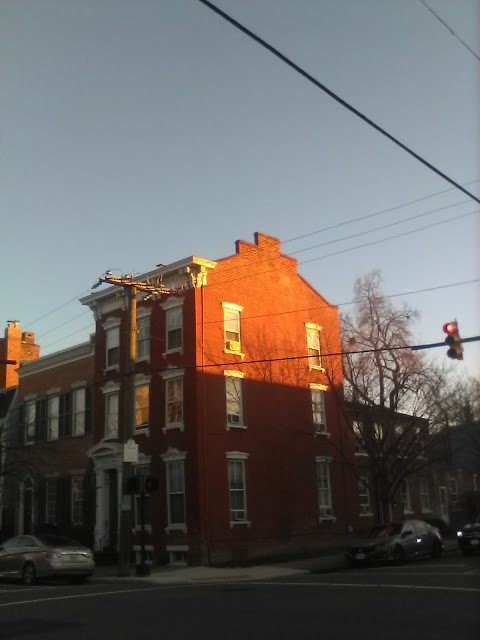 But here in the U.S., as Glenn Greenwald's tweets suggest, the Illiberal Left mob is "giddy" at all of this smothering censorship. Short-term political gain aside, as I tried to explain here, this is indicative of how fundamentally stupid and clueless they are.
OK, that's all I wanted to say on this topic at least for now.
--Regulus
Posted by Regulus at 10:23 PM