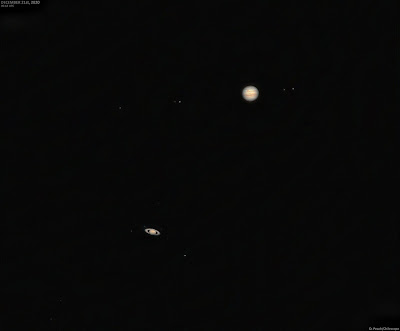 Image of the Jupiter - Saturn Great Conjunction of December 21, 2020; photo by Damian Peach and featured in the December 23, 2020 Astronomy Picture of the Day
I wrote a draft entry late last month on the astronomical topic of the Jupiter - Saturn Great Conjunction. This refers to the closest angular separation between the two Outer Solar System gas giants as seen from Earth in almost 400 years, specifically, 1623 and (according to this article) closest observable since 1226. The angular separation was 0.061 degrees or 220 arc-seconds edge-to-edge separation at degrees at its closest on 21 December 2020. While I never posted that entry, this one contains about two-thirds of the content. 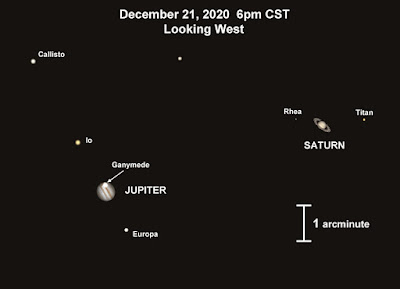 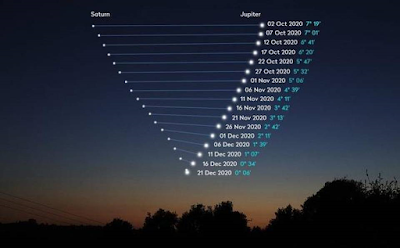 Above: Schematic image showing the angular separation of Jupiter and Saturn in the almost two month period leading up to the Dec 21, 2020 Great Conjunction. Click on image for larger version. 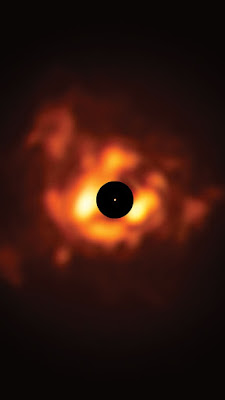 Thus, Betelgeuse's apparent size is about 1/1100th the size of Venus. So, instead of seeing a nickel (~2.1 cm) from 100 feet away, that’s like seeing something 0.002 cm or 20 microns, which is about 1/3rd the width of a human hair (70 microns).
The difference in angular diameter of the main planets (Venus, Mars, Jupiter, and Saturn) and stars in our sky is why stars twinkle but planets do not as seen from the ground: Stars are small compared to the random microbar fluctuations of air pressure whereas planets are large.
It has nothing to do with the fact that the planets are visible because it is reflected sunlight.
*******
Late Monday night, or rather early Tuesday morning by the time I post this, first week of January 2021.
I'm watching my usual night time melange of old sitcoms and other TV shows on MeTV, Cozi TV, and Antenna TV. The latter includes, of course, Perry Mason. Of note, Antenna TV is no longer showing Three's Company at 9 and 9:30 p.m. but instead The Jeffersons. 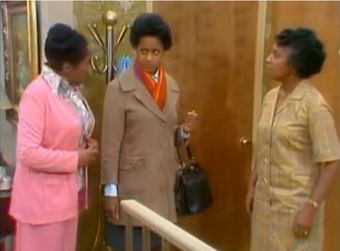 I mention this because the current episodes being shown tonight are the very first two of season 1 -- and ones I quite like, namely, "A Friend in Need" and "George's Family Tree." 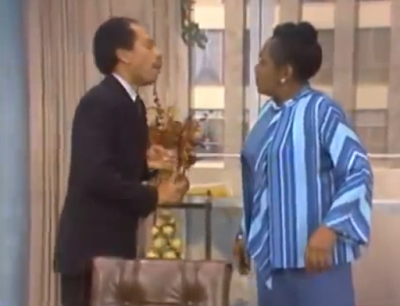 As for Three's Company, yes, I need to post that big entry about the show. My plan now is to post it no later than Jan 11th, but possibly not beforehand. And my intention is to keep it as the lead for a week.
Tomorrow is that fucking double Senate runoff elections for BOTH Georgia Senate seats -- the results of which will determine if Republicans maintain their current 52-48 edge, lose 1 seat for a 51-49 edge, or have a 50-50 tie with VP / Co-President Kamala the Hateful Harpy Harris as the semi-permanent tie-breaking vote. 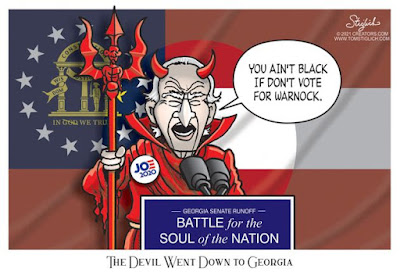 Such an outcome -- depending a bit on Joe Manchin and Mitt Romney -- will determine to what extent the lunatic Democrat Party of Critical Race Theory poison, woke fundamentalism, and AOC-style soft Bolshevism seize control of the government itself under a Pervy Joe caretaker presidency. 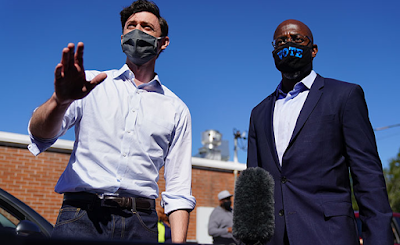 Polls show both Dems ahead -- something that should not be happening given that this is Georgia and one of the Dems is (Jon Ossoff) a wussy trust fund metrosexual with general Socialist leanings and the other is a violent-tempered hard Socialist radical minister wannabe with a highly credible charge of felonious domestic violence (Raphael Warnock). 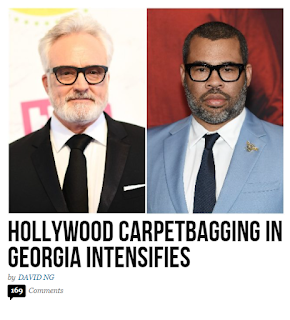 Nor should it help but instead it should hurt badly all the "virtual" carpet-bagging taking place across the Peach State by the the most offensive of the Hollywood liberal elite combined with oceans of California leftwing dark money. But everything is so fucked up these days that anything is possible here we are.
Yes, the polls were spectacularly wrong in the lead up to the presidential election for reasons we all know. Those reasons involve (1) the ongoing leftwing Cultural Revolution and related sociocultural political terror; and (2) most major outfit polls in 2020 were really Big Media psyops rather than actual surveys. The point is, Trump still lost narrowly in a half dozen swing states including Georgia. 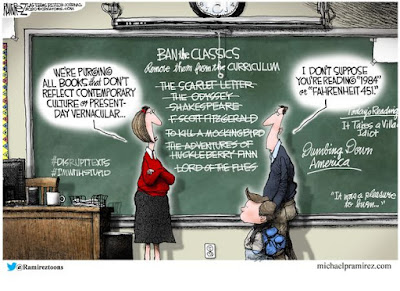 Big Media have intervened on behalf of Ossoff and Warnock by suppression of stories, but neither those outfits nor Big Tech have done so as flamboyantly and illegally as in the presidential race.
This week also features the big January 6 Electoral College certification with lots of commotion around it -- mostly a political kabuki dance -- before Pervy Joe assumes the Presidency on January 20th for at least a few months before Kwanzaa Kamala and her Socialist cabal seeks their 25th Amendment coup. 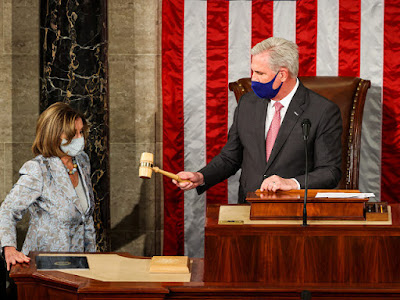 Above: The power-and-immortality-mad octogenarian crone known as Botox Nan dodders her semi-senile, fully hateful self up to the Speakers Chair to stick out her wizened, desiccated claw to grab the gavel after narrowly "winning" her speakership for the 117th Congress. As for the mask shit, she's dictated all this shit (like she doesn't wear during her San Fran blow outs) and non-gender language terms. 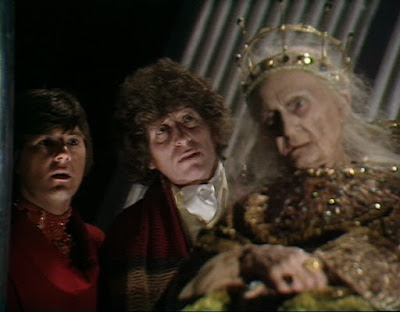 But the hateful hideous tyrant Pelosi -- much like the physical body of the Queen Xanxia character in the 1978 Doctor Who episode "The Pirate Planet" -- knows her time is limited and she's desperate to extend her lifespan through whatever dark arts she can muster. Sucking the blood and life force from AOC and her Squad are presently her only strategy. 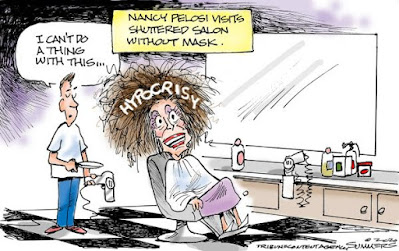 I won't even go into that disgusting abomination of a "prayer" that that piece of shit, Emanuel Cleaver, a.k.a., Ewomanuel Cleaverx, with that WOKE dogshit about "AMEN" and "AWOMAN." 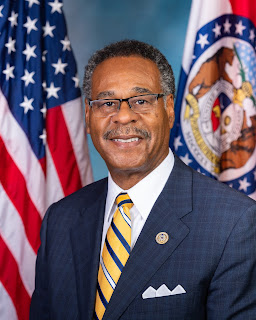 Suffice it say this is the filthy perversion that the morally and ethically diseased Illiberal Left does to language, to culture, to identity, and to humanity itself. But it served its purpose of sexually arousing the WOKE -- whatever their fake genders and real sex organs -- from their New York Times, WaHoPo,and Dept of LGBTQIAA Horseshit Studies perches.
There is supposed to be a "stop the steal" rally here in D.C., so naturally, Madam Mayor McCheese is calling in the National Guard -- but only after allowing months of violent Antifa / BLM mayhem just like all her Democrat mayor and governor counterparts around the U.S. 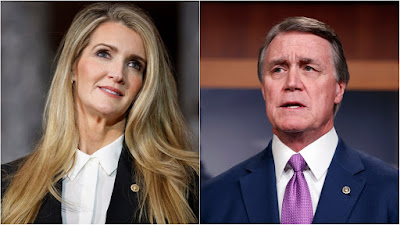 One last comment about the Senate election: I don't know how it came to be that both seats -- presently occupied by David Perdue and Kelly Loeffler - are up for election at same time. I think it involves the fact that one of them required a special election and then a runoff, and this coincides directly with a normal six-year election for the other seat. Whatever the case, it shouldn't happen again because it too destabilizing, especially in the current political climate. 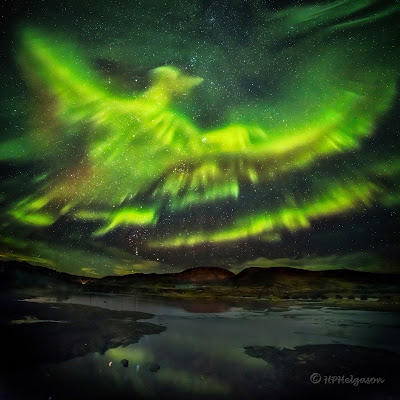 A startling "Phoenix"-shaped pareidolic aurora over Iceland about 30 miles north of Reykjavik in 2016; Astronomy Picture of the Day for January 3, 2020.
*******
OK, I'm signing off. My intention is to post an entry in a day or two.
--Regulus
Posted by Regulus at 2:43 AM