On the Eve of the First of the Big Covid-19 Vaccine Rollouts, Some Commentary on the Intentionally Destructive, Lawless Lockdowns of the Vindictive, Stupendously Hypocritical Democrats Plus the Danger of WOKE-Addled Medical Professionals 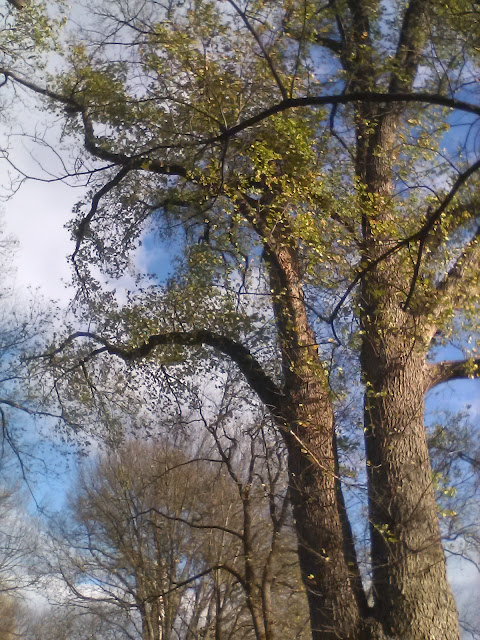 Elm trees on a blustery fall day on the north side of the Reflecting Pool between the Lincoln Memorial and World War II Memorial, Washington, D.C., 2:45 p.m., Dec 5, 2020
*******
Wednesday late night.
As ever, there are many things I want to relate.
For this entry, I want to focus on the extraconstitutional, indeed, outright lawless and life-and-liberty-depriving lockdown horseshit that wildly out-of-control local-and-state-level Democrat pols are ostensibly putting in place through unchecked and amok executive decrees. 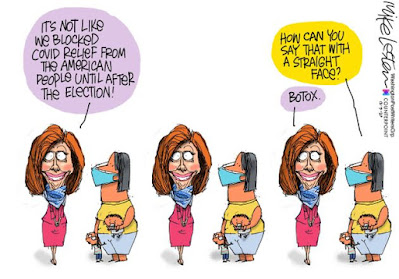 These lockdowns in Democrat run cities and states are now completely divorced from anything vaguely related to Covid spread mitigation and instead is simply a calculated and vindictive destruction of those groups the rat shitty Fecescrat Party fears and loathes to include Trump voters, the police, small businesspeople, and people of traditional faith. 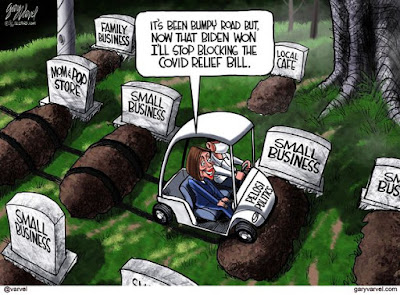 I'd like to post outright the following piece by John Daniel Davidson of The Federalist, but instead I'll just post the link (embedded): It’s Time For Mass Civil Disobedience Against Lawless Lockdown Orders. 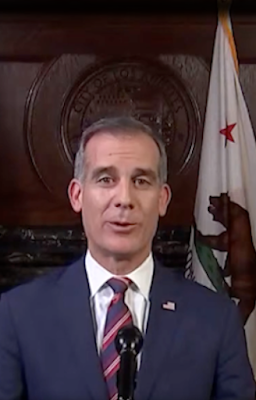 I have to be careful what I write here about the horse's ass characters of Los Angeles Mayor Eric "Greasy Asshole" Garcetti (a piece of human shit who is as worthless as he is incompetent), Cali Gov Gavin "Feminine Itch" Newsom (D - Twat), Michigan Gov Gretch "Abusive Bitchmer" Whitmer, Andrew "Mafioso Thug" Cuomo, and the rest, as I don't want to get myself in trouble in the manner of this crazy she-devil.
Just FYI, this woman, Democrat Michigan State Rep. Cynthia Johnson, is a wealthy, white, WOKE liberal's idealized dream of a black woman. She could write for the New York Times op-ed page or bitch to Rachel "Mad Cow" Maddow on PMSNBC all day long. 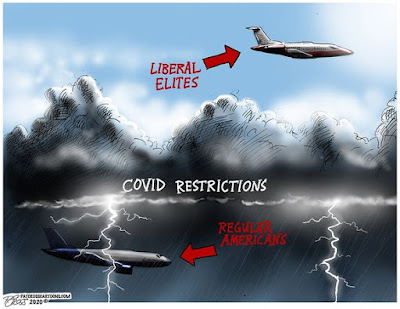 But the destruction of lives they are causing is deeply infuriating, indeed, enraging precisely because of the vacuous hypocrisy combined with searing contempt of the people they ostensibly govern that are driven by hateful pathology. 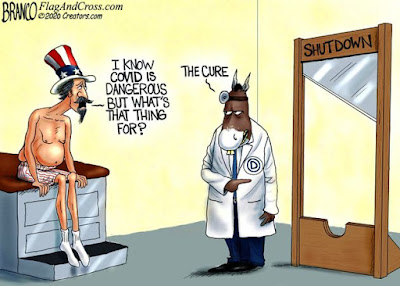 We found out in a court case that the LA health department is just making up shit with no actual meaning behind the outdoor dining ban. These are actions are DESIGNED to destroy certain segments of the economy and groups of people -- all about control and with no relationshp to Covid whatsoever. 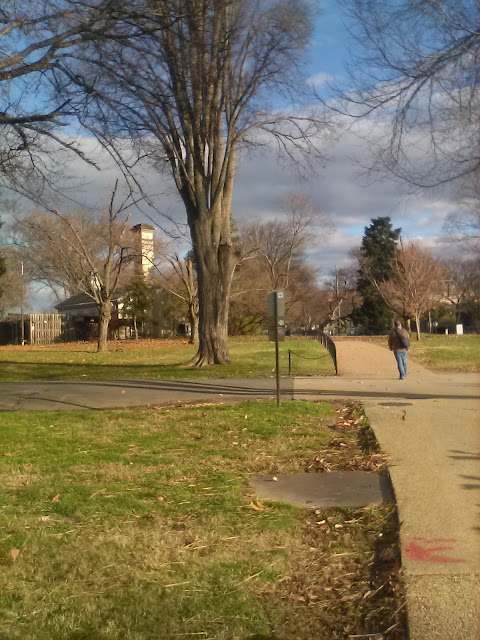 The fact that Pennsylvania Gov Tom Wolf "got Covid" means nothing -- precisely because "getting" Covid means nothing to nearly the entire population and the ongoing massive spike is as meaningless as it is a contrivance of the 40-Ct PCR test, the endless death certificate matching of ANY cause to "with Covid," and the Media/Health Complex powerful incentive to fan endless hysteria and a "casedemic" that is functionally meaningless at this point.
The key data set are excess deaths -- and those aren't even semi-finalized until several weeks after the fact. 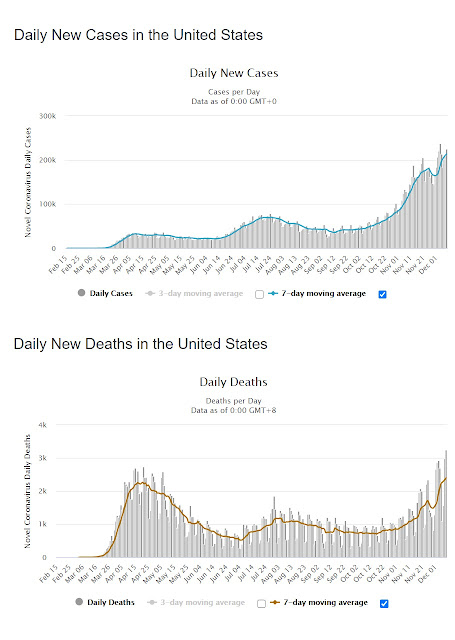 ABOVE: Barchart of daily positive cases and reported deaths with 7-day rolling average between 15 Feb and 09 Dec 2020 from the Worldometer website.
*******
BELOW: Barchart of weekly excess deaths in the U.S. from all causes above the long-term average expected deaths (orange line) between Aug 1, 2019 and Nov 28, 2020 with 7-day rolling average. In March and April, as a result of the NY/NJ Cuomo/Murphy nursing home catastrophe, the excess deaths spiked to 40% above the mean. The Sunbelt surge during mid-summer produced a 15 to 25% excess death rate. As of early November, already a month into the current "casedemic," the excess death rate was in the 10 to 15% range. 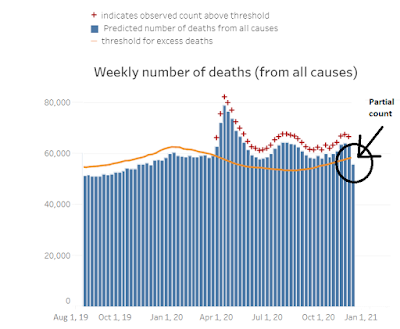 This excess death rate may very well rise into the 20% to 25% range but probably won't go above that even with the massive positive case spike. That's because the death rate from Covid-19 just isn't that high except for the very elderly and/or those with severe co-morbidities. And after this wave, the rate will probably fall back toward the background rate, which itself is not a constant.
*******
Speaking of Pennsylvania... 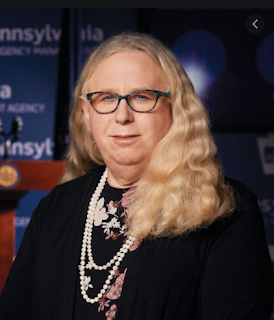 The real freak show remains that bizarre totalitarian wannabe in the form of a scary, bad drag act known as "Rachel" Levine. Scary Rachel doesn't just seek total control for the sake of an open-ended media pandemic but is also a hypocrite. You see, he/she/xe/zhe got his/her/xe's/zhe's mother out of a nursing home last spring.
We are starting to get some judicial branch pushback on this garbage, but we're still a long way from where we need to be and too many judges are unwilling to actually uphold basic Constitutional freedoms. And remember that this garbage is is only going to intensify as Pervy Joe takes off and starts making weird "mask mandates" for interstate highways or Amtrak trains or outside in national parks. 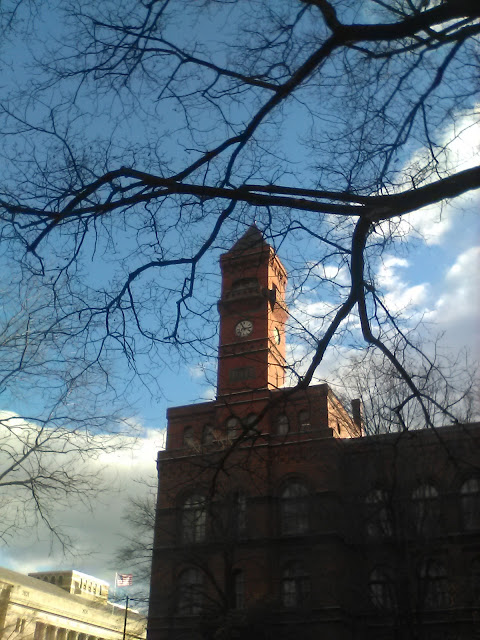 The grotesque aspect of the present time is the fact that WOKE fundamentalist has infected the Medical / Heatlh Care Complex in the manner that it has infected Big Media, Big Academia, and Big Tech. As a result, you end up with a vast and unwanted array of super-politicized medical professionals including the following pronoun-crazed she/zhe/he/xe/it lesbian doctor who hates and tries to her patients. 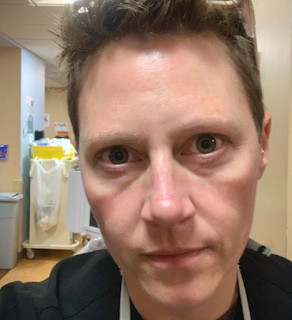 As pointed out in this Red State article, the Ultra-WOKE Dr Rebecca Karb is, big shock, your typical hateful leftwing hypocrite. Her twitter feed reveals that she/zhe/xe was all about BLM riotous mass protests during all the Democrat/Big Media-sponsored violent unrest.
These far-left hateful illiberal doctors and nurses -- malevolent WOKESTERS obsessing on pronoun usage who are, I readily admit, a subset of a significantly larger far more selfless and noble profession -- are becoming a real unwanted wart on the ass of society with their endless, tinny, self-righteous, WOKE-delirious whining. 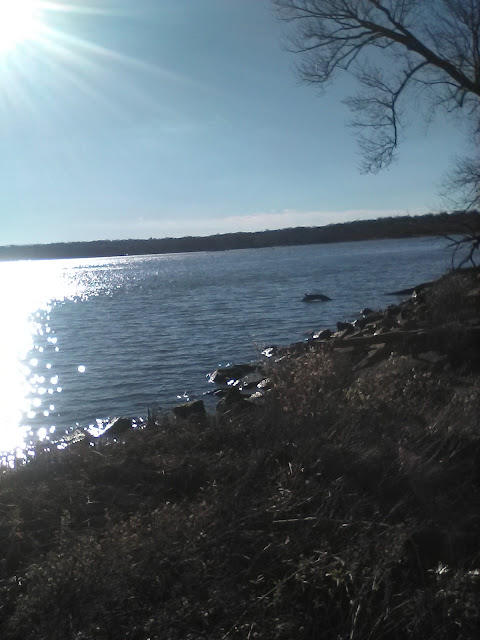 However, unlike the hateful ethical degenerates in the Big Academia racket or the narcissistic, circle-jerking ass-hats of Big Media -- two parasitic groups that provide no meaningful value to society -- the fact that many doctors and nurses are living and breathing this WOKE / CRT garbage and it's creeping into how they practice medicine, well, that's actually functionally dangerous. 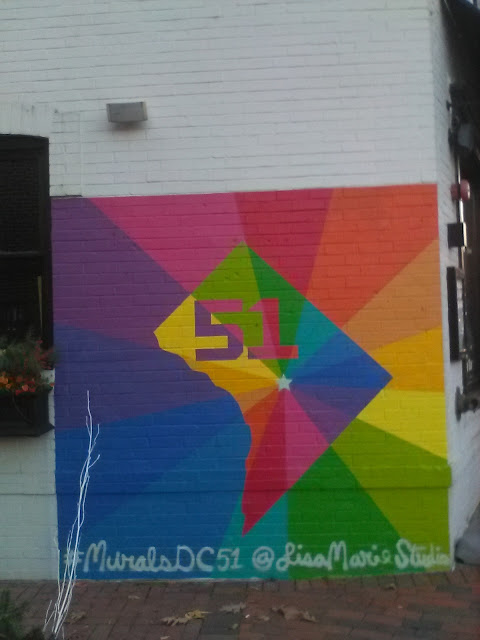 It is worth noting that the first of at least three Covid vaccines are due to be approved by that FDA's Vaccines and Related Biological Products Advisory Committee in its much-anticipated meeting tomorrow -- though it remains to be seen how quickly FDA itself then gives final approval or will it try to do its usual 24-month everybody-takes-a-cut holding action. As it is, both the UK and Canada have approved the Pfizer / BioNTech vaccine, which miffed Fauci. 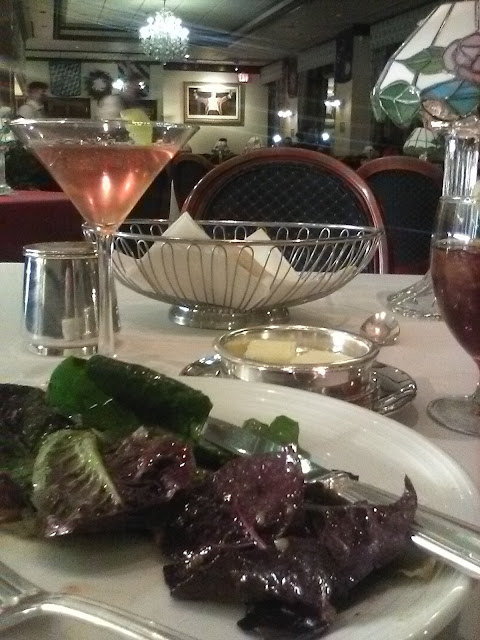 Interior at La Perla Ristorante, Washington, D.C., 7:44 p.m., December 5, 2020
I went to La Perla on Saturday night by myself and then to Filomena with Tim on Monday night. I had never been to either place previously. I suppose posting pictures of restaurants in the context of this entry is problematic. 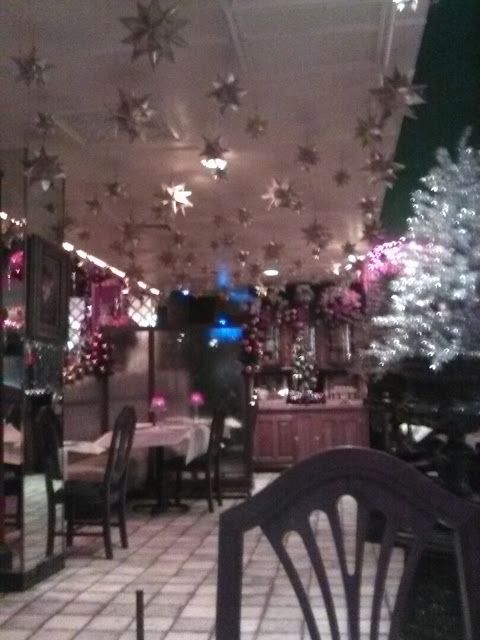 Filomena Ristorante, Georgetown, Washington, D.C.,
5:01 p.m., December 7, 2020
My understanding is that the Covid casedemic is to result in D.C. restaurants returning to 25% indoor capacity next week from the current 50%. And, remember, that will NEVER change -- only yo-yo back and forth forever. What's more, the Branch Covidian terrified sect of the WOKE love that fact. 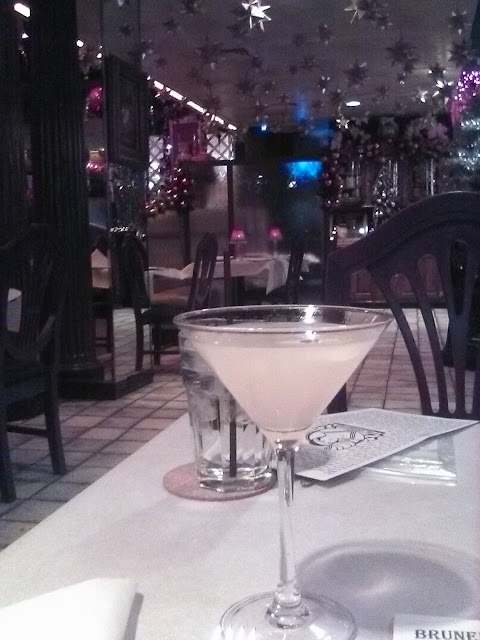 But as Alex Berenson -- who was on fire today twitter -- pointed out, the American Big Media and Health Complex couldn't be doing in a bigger act of (intentional?) sabotage given the hateful, arrogant, self-destructive way the vaccine is being rolled out. 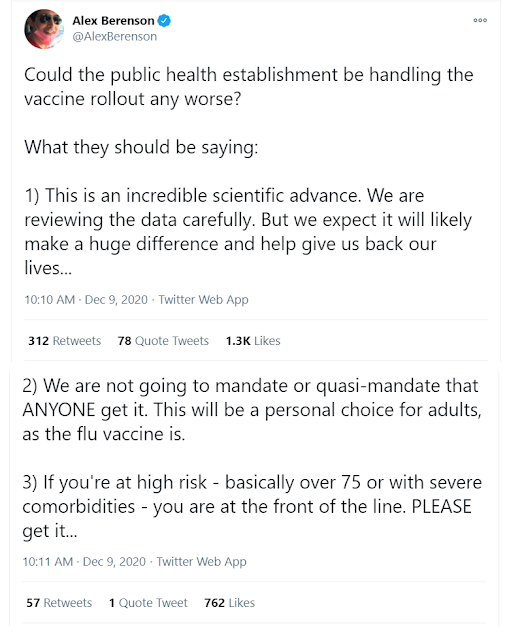 Above and below: Compendium of Alex Berenson's five tweets on Wednesday morning about the incredibly tone-deaf stupid way in which the Medical / Health Complex, with the help of its Big Media allies and the Democrat Party are rolling out the vaccines. 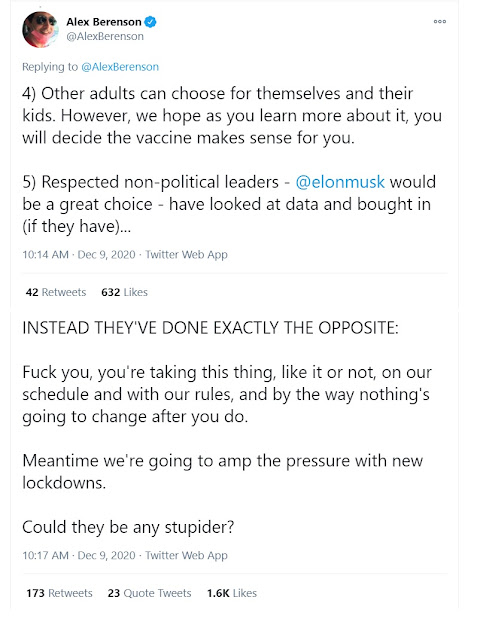 As Berenson points out, this refers to the threats of mandatory vaccination combined with the "promise" of mask-wearing no matter the amount of vaccine uptake, and, worst of all, the ever-expanding array of catastrophic and counterproductive lockdowns that are destroying Big, Blue Democrat cities, the erstwhile economic engines and cultural wellsprings of the United States. 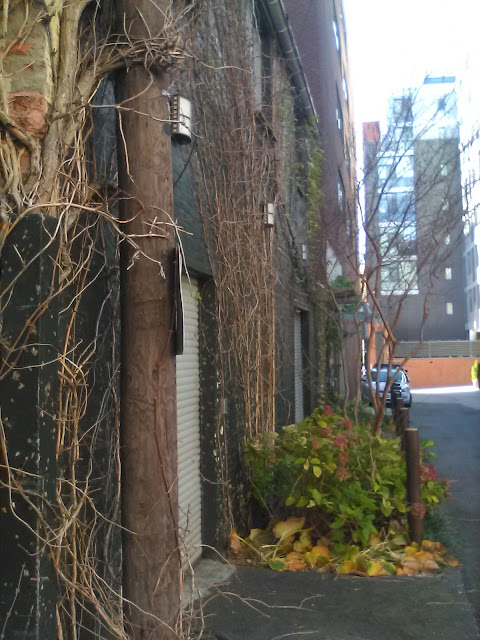