Neither Flash-in-an-Audience Pan, Nor Gonged Act; Instead, Some Bio and Trio of Her Nice Songs: A Very Happy Birthday to the Talented and Fun JAYE P. MORGAN! 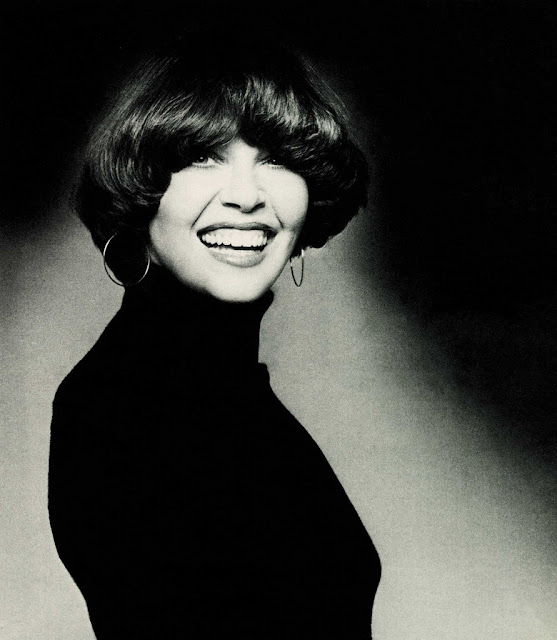 This entry is dedicated as a very happy birthday wish to the talented and all-around-fun Jaye P. Morgan on the occasion of her 89th birthday today. 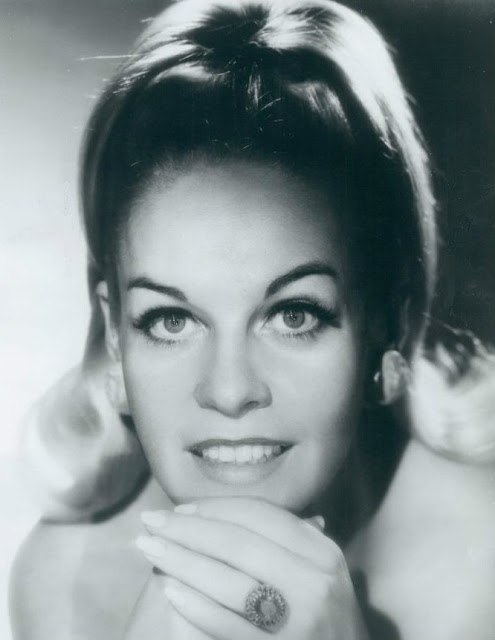 Jaye P. Morgan in 1968
Born Mary Margaret Morgan on December 3, 1931, Jaye P. Morgan has a successful singing career in the 1950s that morphed into television personality-based one in the 1960s and 1970s. During those decades, she appeared on multiple variety TV shows and even had movie acting roles. And it goes without saying that to many people (myself included), her most famous television incarnation was in the period from 1976 to 1978 as one one of judges on that legendar and, yes, notorious, variety and game show The Gong Show.

Featuring weird, offbeat, and sometimes outright bizarre "talent" acts, The Gong Show was hosted by the hilarious and strange Chuck Barris and involved a rotating trio of panel judges who evaluated the acts using a large note card and magic marker to give a score between 0 and 10. But as the show's name suggests, there was also a central gong whereby any one of the judges could just take their big, soft-capped mallet and GONG!!! the act into a shortened, ignoble end. There were times when all three judges gonged simultaneously ("gang-gonged"). 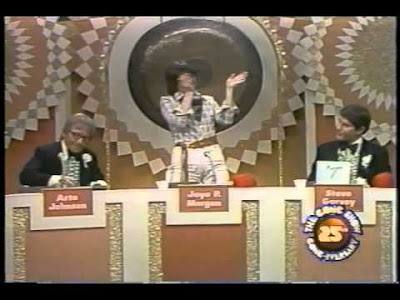 While there were dozens of judges over the show's original (and subsequent) runs, Morgan was one of a dozen or so regulars as was Jamie Farr of MASH fame. The judges themselves often became part of the show's antics.
The Keeper of All Knowledge has a nice description of the show:
"The Gong Show" is an American amateur talent contest franchised by Sony Pictures Television to many countries. It was broadcast on NBC's daytime schedule from June 14, 1976, through July 21, 1978, and in first-run syndication from 1976 to 1980 and 1988 to 1989, and was revived in 2017 for broadcast on ABC. 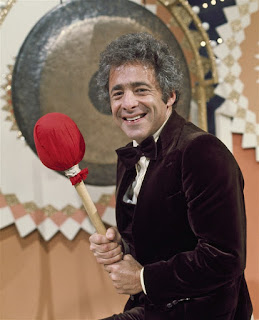 The show was created and originally produced by Chuck Barris, who also served as host for the NBC run and from 1977 to 1980 in syndication. Its most recent version was executive-produced by Will Arnett and hosted by Tommy Maitland, a fictional character performed by Mike Myers (uncredited in Season 1).
"The Gong Show" is known for its absurdist humor and style, with the actual competition secondary to the often outlandish acts presented; a small cash prize has typically been awarded to each show's winner. 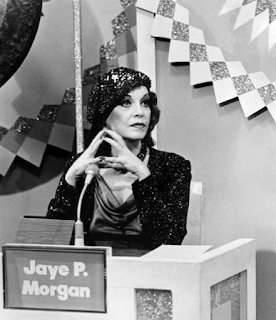 Morgan appeared on this show between 1976 and 1978 -- until she was fired for flashing her boobs during one of the show's weird regular acts known as Gene Gene the Dancing Machine.
As context, on occasion she attempted a strip tease during the show's wilder moments but was always stopped.
Finally, during one especially raucous segment involving Gene, during which everyone was throwing all kinds of stuff at him as he did his trademark dance in his trademark outfit, Morgan just unbuttoned her blouse and flashed the audience full-on. It won't surprise you to learn that this ranks among the show's top 4 of outrageous moments along with the notorious "popsicle twins" act. 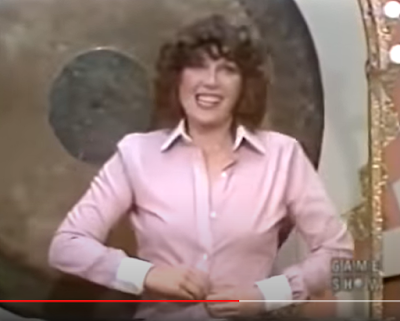 To clarify, and as she indicated in this interview with with photographer and writer Alan Mercer in March 2014, she did not wear a bra, and so she really flashed the audience and was sacked. That first incarnation of the show went off the air six weeks later. NBC really didn't like the show and wanted to end it. 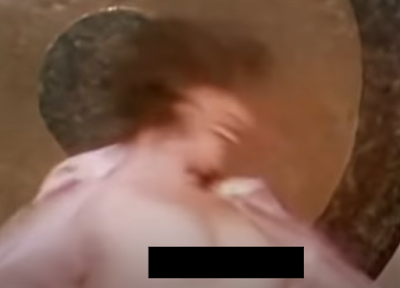 No, she shouldn't be defined by that one crazy moment on a 1970s era, self-parodying, sometimes outright lunatic, daytime TV variety show, but it was frickin' hilarious.
Here is the whole scene -- but with the actual flashing part OOPS!'d out (the uncensored version requiring age verification is here):

Morgan continued to appear in variety shows and later in movies -- as late as 2002 and to include the 1980 movie directed, written by, and starring Chuck Barris himself. Barris passed away in March 2017 at 87.
Oh, and on a personal note, I wonder what happened to the gong itself and the big, red-felt-topped mallets used for the actual gonging. 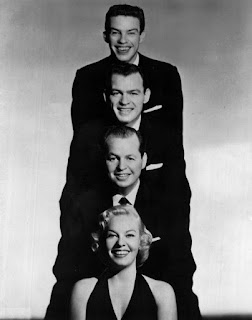 But before her racier, edgier, sexier 1970s incarnation culminating in The Gong Show period, Jaye P. Morgan had a successful career as a dusky voiced, lyrically talented singer with a wholesome image in the 1950s. Born in the town of Mancos in southwestern Colorado on December 3, 1931, Jaye P. and her family moved to Los Angeles by her high school years.
Her nickname "Jaye P." apparently came from the fact she was class treasurer in high school and took the moniker as a pun on J.P. Morgan. 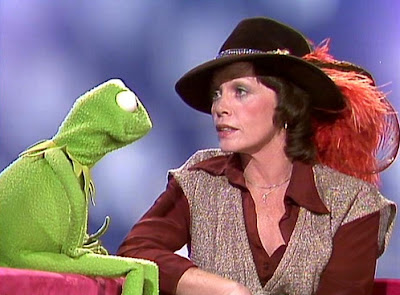 Jaye P. had six siblings to include five brothers and one sister. Four of the brothers -- Duke, Dick, Bob, and Charlie -- formed The Morgan Brothers musical group with whom she sometimes sang. The image below is from Jaye P.'s website: 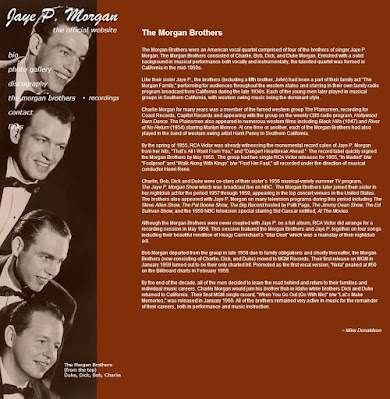 In 1950, a year after her graduation from high school, Morgan made a recording of "Life Is Just a Bowl of Cherries" issued by Derby Records, which made it to #26 on the U.S. Billboard record chart. Soon after, she received an RCA Victor recording contract, and she had five hits in one year, including her biggest hit "That's All I Want from You", which reached #3 on the chart.
Other notable hits included "There's a Dream in My Heart" by Rolande Maxwell Young, "The Longest Walk" and "Pepper Hot Baby." In 1954, she married Michael Baiano. She joined MGM Records in 1959 after spending the previous six years with RCA Victor. 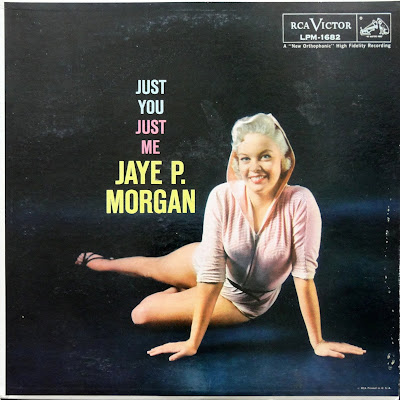 From 1954 to 1955, Morgan was a vocalist on the ABC television series show Stop the Music. In November 1955, the British music magazine, NME, reported that Morgan was the top female vocalist in the U.S. Cash Box poll. Beginning January 11, 1954, she was a featured singer on the Robert Q. Lewis Show on CBS-TV. 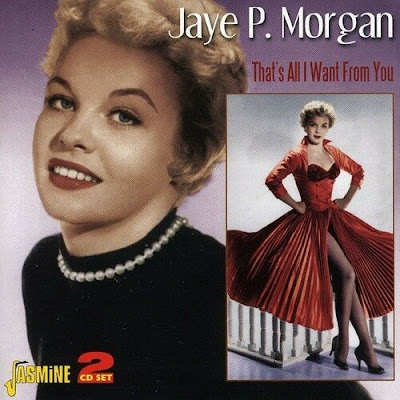 In 1956, she had her own show, The Jaye P. Morgan Show, and made guest appearances on a number of other variety shows. She was a charter member of the Robert Q. Lewis "gang" on Lewis's weekday program on CBS, and was featured on a special episode of The Jackie Gleason Show in which Lewis's entire company substituted for the vacationing Gleason. In 1958, Morgan appeared on ABC's The Pat Boone Chevy Showroom. On October 6, 1960, she guest starred on NBC's The Ford Show, Starring Tennessee Ernie Ford. 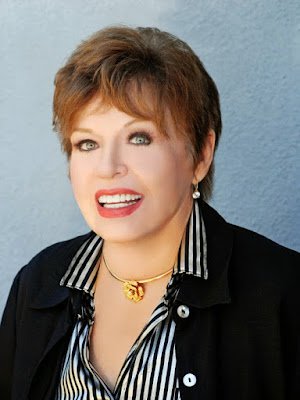 As mentioned, Jaye P. Morgan continued to make occasional TV and movie role appearances with focus on game shows to include The Gong Show.
Today, she is retired, and I really couldn't find anything about her after the Mercer interview nearly seven years ago. She has the above-linked website, but it isn't being updated and instead is static from its creation.
Anyway, as an appropriate way to a birthday tribute to Jaye P. Morgan, let's feature a trio of her 1950s-era songs ...
"That's All I Want from You" as performed by Jaye P. Morgan with the Hugo Winterhalter Orchestra (1954)
*******
Next is a famous 1927 song by Hoagy Carmichael with lyrics added in 1929 by Mitchell Parish that was covered by Jaye P. Morgan and her brothers, The Morgan Brothers.
"Stardust" as performed by The Morgan Brothers and Jaye P. Morgan (1958)
*******
My personal favorite is this one -- "I Ain't Got the Man" -- but I can't embed it because the only stupid copy I found has the player controls disabled for whatever reason. personal favorite. I will note that Bryan Wright featured on his most recent Shellac Stack podcast.
In lieu of that, let's feature this lovely song:
"The Longest Walk" by Jaye P. Morgan as performed with the Hugo Winterhalter Orchestra (1955)
*******
Alright, that's all for now. My next planned entry will be on Saturday or Sunday night.
--Regulus
Posted by Regulus at 10:43 PM