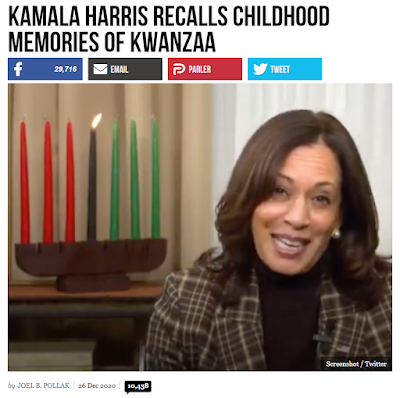 Kamala the Hateful Harpy Harridan, 25th Amendment Coup Madam President-in-Waiting, explains the generations-long spiritual meaning of KWANZAA to her Jamaican - Indian family.
*******
Yes, a Jamaican - Indian monsterously hateful pol ... the hateful and barren stepmother married to a white Jewish guy with two children from a previous marriage ... who herself has spent her teenage years in Canada definitely can't get enough of Kwanzaa, a holiday created in the U.S. when she was about 2. 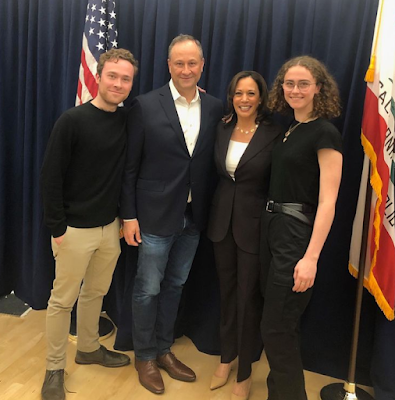 But not to worry: The fucking WaHoPo, New York WOKE CULT Times, PMSNBC, and the fucking racists of CNN are there to inform folks that if anyone DARE question Lady Harridan Macbeth's status as Virgin Mother of God and of the Universe -- thus beating out Winnie "The Necklacing Pooh" Mandela --are on par with Holocaust deniers.
Yes, this is how the WOKE but historically illerate and fundamentally brain dead-ignorant Big Media roll and why they are actual excreta.
What's more, Twatter and Fece-Book will make sure to "deplatform" anyone and anything that fails to take into account her greatness. 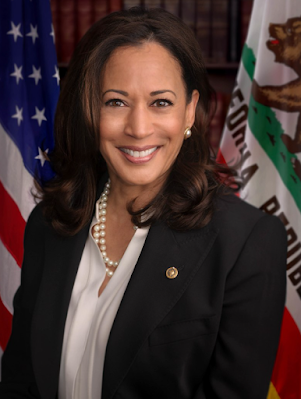 I'm just looking forward to what happens when Kamala the Hateful Harpy Harridan has dispatched Drooly, Pervy, Incoherent, Incontinent Biden -- I refer to "Doctor" Jill's dementia-addled husband who notionally holds the title of "President of the United States" -- and starts (as she will) her Gavin Newsom-style executive orders for gun confiscation and Obama-inspired, identity politics-based confiscatory taxes for "reparations."
Oh, and then there is when she creates the Department of AntiRacism and makes Doctor Ibram X-Hole Kendi the first Secretary and gives him unlimited power to do as he pleases.
Yeah, that'll all work out well -- even with Twatter and Fecesbook to "ban" any dangerous views.
If you're curious, I give Biden six months. I also give even odds that Kamala is the last President of the United States in its present form.
And on that note, I'll end this entry.
UPDATED 10:22 p.m. 12/30/2020
OK, I must note this Ann Coulter column on Kwanzaa and Kamala [link embedded]: Happy Kwanzaa! The Holiday Brought to You by the FBI
Excerpt:
"Post some pictures, Kamala! We’d love to see your Brahmin and Jamaican grandparents sitting around the Kwanzaa candles recalling celebrations way back when they were three or four years younger. (Would that The Washington Post’s “Fact Checker” would start counting Kamala’s lies!)" 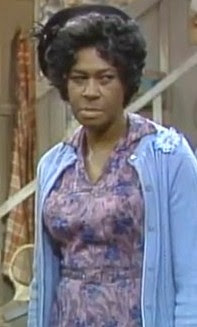 "Kwanzaa, celebrated exclusively by white liberals, is a fake holiday invented in 1966 (when Kamala was 2 years old) by black radical/FBI stooge Ron Karenga — aka Dr. Maulana Karenga, founder of United Slaves, the violent nationalist rival to the Black Panthers. Liberals have become so mesmerized by multicultural gibberish that they have forgotten the real history of Kwanzaa and Karenga’s United Slaves."
"In what was ultimately a foolish gambit, during the madness of the ’60s, the FBI encouraged the most extreme black nationalist organizations in order to discredit and split the left. The more preposterous the group, the better. (It’s the same function MSNBC serves today.)"
Hahahaha
End of Update and of Entry.
--Regulus
Posted by Regulus at 11:27 PM