Brief Update and Dark Thoughts For a Dystopian Time on a Gusty, Blustery Late Morning Hour in Early December 2020 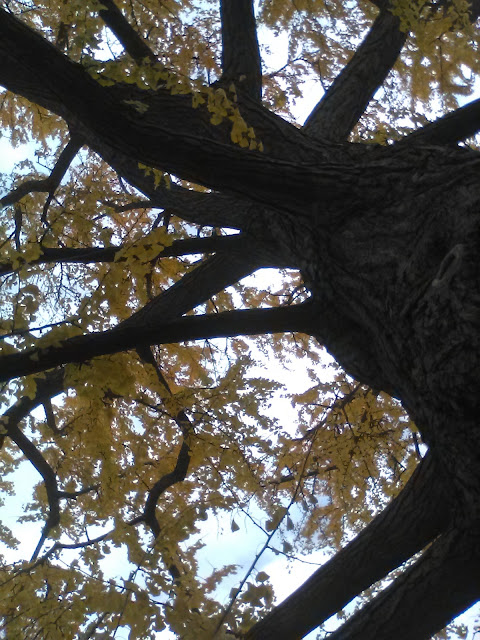 The fall-colorful boughs of one of the two large ginkgo trees at the corner of the USDA HQ just off the National Mall, Washington, D.C., 2:28 p.m., December 1, 2020
*******
This is just a quick late morning update.
It's a gusty, blustery early December day with air temps around 44°F, dew point about 25°F, and a westerly wind in the 10 to 15 mph range with gusts to 25 mph. These conditions reflect the ongoing surge of modified early season Arctic air that followed in the wake of the big storm two days ago that dropped 2 to 3 inches of rain across the immediate area. 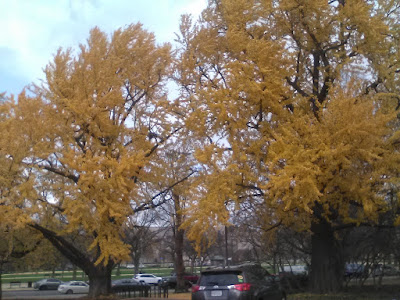 I will say that so far, the pattern going into winter appears a lot more "winter-like" than what happened in the functionally non-existent winter of last year when the (NH) polar vortex was so strong and stable that it never budged out of its source reason -- until the final spring breakup with resulting Arctic outbreak in late April that was so late-season-freeze problematic for the vegetative / blooming cycle. 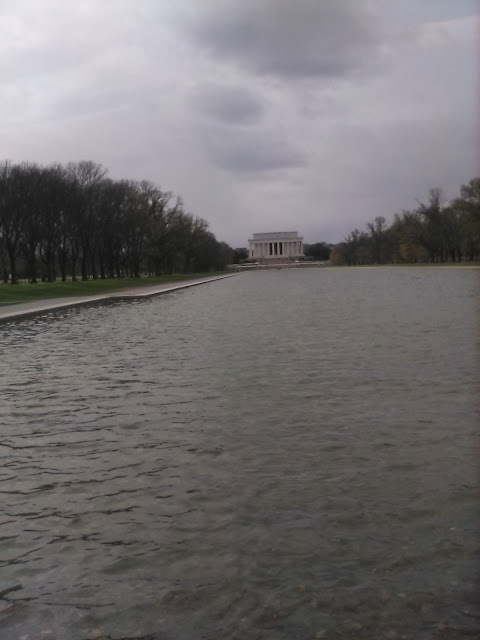 Above: The Reflecting Pool is SO MUCH cleaner than it used to be. Or so it seemed on a gusty, blustery, first day of December in 2020.
*******
As a brief update, I just wanted to note that last night, Tim and I went to Taberna del Alabardero by Farragut West, where we had quite a nice dinner with a great conversation.
(Well, to be clear, the food perturbed my digestive system, partly because I was already in an out-of-whack state from not having gone to bed until 6 a.m. the previous night and then having my "circadian rhymes" and associated biofunctions not in sync. OK. enough of that.) 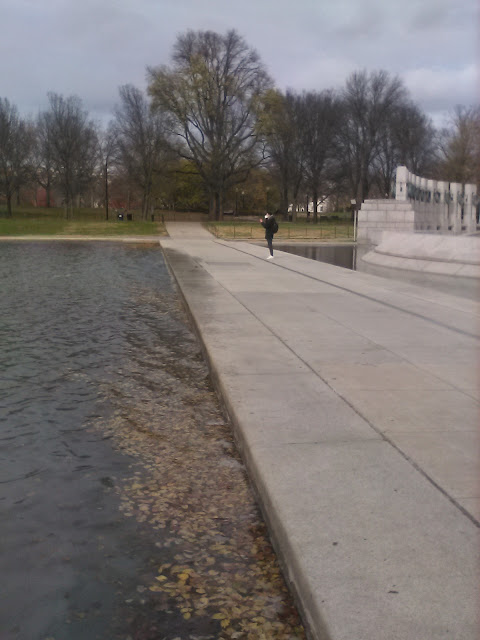 Above: The Reflecting Pool in the gusty northwesterly wind yesterday seemed to have a mini-seiche thing going on. Well, it does look like Lake Erie scaled down by a factor of a million.
*******
Thereafter, we walked not toward my apartment but a bit in the opposite direction -- ending up at The St. Regis at 16th and K Streets NW -- where (1) I was able to find a private, lockable bathroom in a lower-level maze of narrow hallways and (2) we had an after-dinner drink while seated in the ornate lobby. 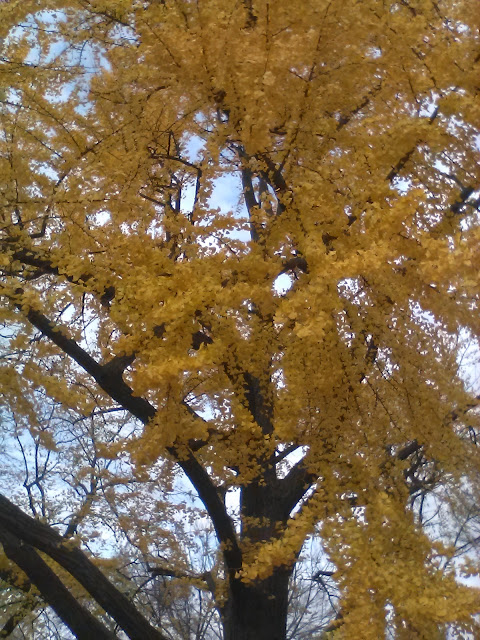 Tim ended up missing the late Metro to King Street - Old Town and took an Uber (or as my dad says, YOOO-ber). I walked home -- following a route I rarely go these days, namely, up Connecticut Ave to Dupont Circle and thence the short distance up Massachusetts Ave to my apartment by 11:30 p.m. just in time for Perry Mason on MeTV. These days -- in the time of WOKE insanity and Covid-1984 with Branch Covidian paranoiacs running amok -- I tend to follow a prescribed route to and from L'Enfant Plaza that involves 22nd / 21st / 20th Streets NW and the National Mall.
At the 11 p.m. hour, one of the most prominent thoroughfares, Connecticut Avenue, between Lafayette Square and Dupont Circle, still looks shockingly dead and depressing these days. Yet D.C. is in far better shape than so many other large, Democrat one-party rule cities that are dying to include, NYC, Chicago, Minneapolis, Portland, Seattle, and San Francisco. Remember, though, this is what these fuck-faced Dems want as part of their Great Marxist-Oligarhical "Reset." 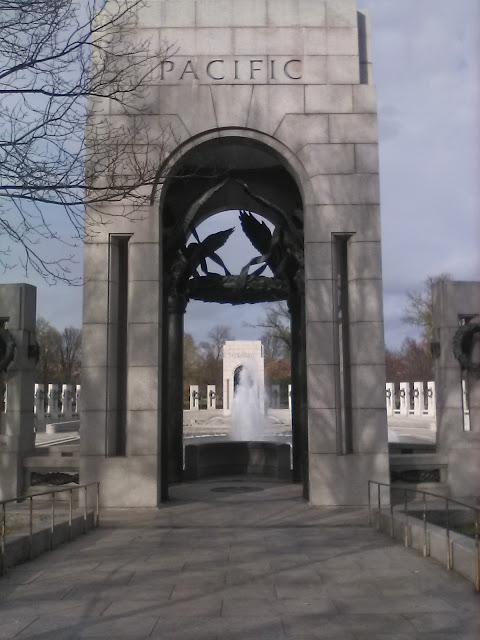 Above: God, I wish I had lived in the time of World War II and not this garbage trans-liquefied, CRT-crazed, WOKE-panicked, oligarchical-suffocating spiritual (and even actual) death.
*******
This was the first time that I was down at so-called "BLM Plaza" -- now blocked off to vehicle traffic and just a pedestrian promenade -- since all the violence civil unrest this past summer and early fall (with mayoral-encouraged additional violence against Trump supporters just a few weeks ago). I'm actually amazed that The Regis managed to avoid serious damage from the endless murderous mobs that infested the place for months.
It was weird seeing this stretch of 16th Street just deserted on a blustery December night.
More than just the cold and gusty weather conditions, now that Pervy Senile Joe is on his Big Media / Big Tech-facilitated way into the Oval Office -- with Kamala the Hateful Harpy Harridan Harris the 25th Amendment Lady-in-Waiting -- and the Great Democrat Oligarchical Restoration is already underway, Botox Nan's Antifa street vermin shocktroops and BLM violent scum are not especially needed. 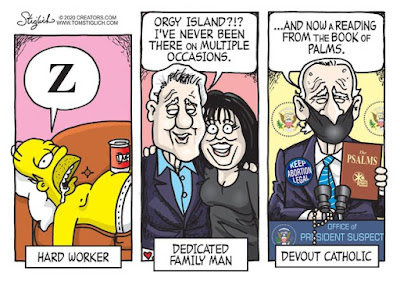 These fucking worthless Antifa vermin so historically illiterate and all-around-submoronic stupid that they have no idea that they are, to quote Karl Marx, merely "bribed tools of reactionary intrigue." 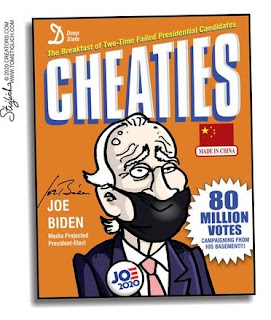 About the Glorious Clinton / Barry O Era Restoration, I read (and I'm not linking to it) that (in addition to the Right, of course) the Left is highly perturbed at Biden's choice to head OBM -- namely, the longtime head of the Center for American Progress and anti-Bernie Bro internet troll Neera Tanden. Matt Taibbi piece was hilarious.
Alas, it's behind a paywall, so I won't link to it. Somehow get it for free via email, though.
The true Socialist Left -- not the identity politics / CRT-poisoned nihilists -- will soon realize where it stands in a Kamala / Corporate Oligarchical regime.
Before signing off, I highly recommend this nice review of part 3 "Masks" of Alex Berenson's book series "Unreported Truths about COVID-19 and Lockdowns" [link embedded]: 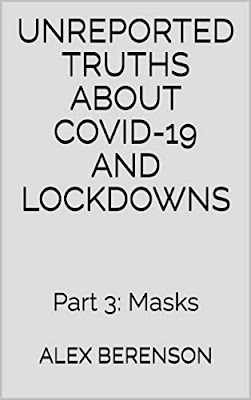 Alex Berenson’s Book About Face Masks Is An Absolute Must-Read.
The review by Scott Morefield appears on Townhall.com. As he notes, it's shocking Big Tech is even letting it be sold and reported on its platforms.
Of note, "Covid-19" or rather, SARS-CoV-2, is so widespread that the 40-Ct PCR test is finding it everywhere.
And as a result, the death toll appears to be spiking -- approaching 3,000 per day.Except these are mostly the very elderly and sick "with Covid," not "from Covid." The real story is that the excess death mortality even now is only modestly higher. 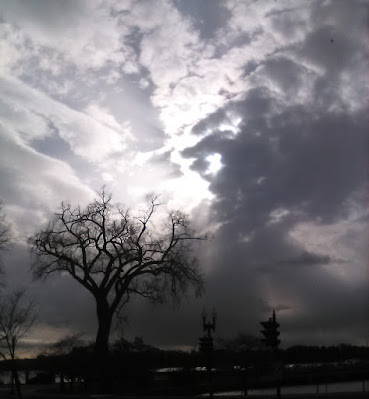 But the face-diapered-worshiping Lockdown Left -- at the behest of Big E-Commerce, Big Media, and Big Tech Oligarchy -- are on the move looking for more societally suicidal lockdowns. These result in massive collateral death and destruction TO INCLUDE, perversely ironically, a portion of those excess "Covid" deaths.
Those meaningless "cases" and excess deaths and then used as a pretext by the Andrew "Mafia Thug" Cuomo, Gretch "Abusive Bitch" Whitmer, and Gavin "Feminine Itch" Newsom sorts to justify more lockdowns. What a great world we live in.
OK, I'm siging off for now. I'll try to post another entry later tonight.
--Regulus
Posted by Regulus at 11:32 AM