Where the Buffalo Roam: Pushing Back Against Democrat Autocrats and Their Health Stasi; Sheriffs Tell Gavin "Feminine Itch" Newsom To Pound Sand; Plus Estimated Time to North and South Dakota Herd Immunity -OR- In a Drink Fog 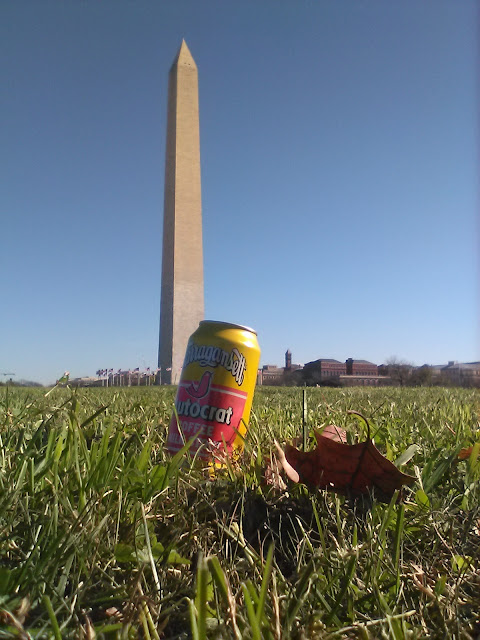 Concerning above image I took on Friday in a self-evident location: I didn't know there was a Narragansett Autocrat Coffee Milk Stout product until I saw that empty yellow and red can just sitting there in the grass near 17th Street on the National Mall by the Washington Monument on Friday, November 20, 2020...
*******
Speaking of autocrats, some meaningful pushback against the Democrat autocrat political leaders' ever-more-draconian and ever-less-rational "health emergency" diktats and their not-so-secret Health Stasi, in this case, those of Andrew "Stone Face Mafioso Thug" Cuomo:

Yeah, get the fuck out and come back with a warrant.
What happened here is there was some "anonymous tip" from some twat coward that this Buffalo business establishment (not sure the business -- looks like a restaurant or bar). 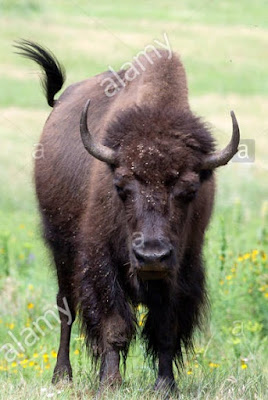 The result is some middle-aged female buffalo (yes, also called a cow) possibly from the health department (or related emergency bullshit) clad in her filthy, bacteria-filled, quite ineffectual mask, bulldozing in with her police posse. They were there to demand nothing less than the wholesale and wildly unconstitutional destruction of peoples' livelihoods and lives for the sake of Cuomo's Covid horseshit.
Other members of the posse include a walrus in ill-conceived striped shirt, jacked up "sheriff's idiot" in what might be a bullet proof vest, and one or two other random prick cops.
In the video, one of the prick copes starts bloviating about "masks" ... Yeah, let's talk about the effectiveness of the goddamn mask fetish of the Branch Covidians ... 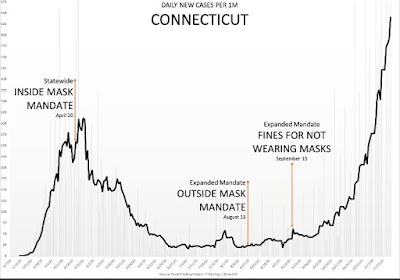 Above: Yes, this is for Connecticut but it is the same EVERYWHERE. Indeed, only among your fuck-headed D.C. WOKESTERS would you get a doubling and tripling down on face diapers in the context of such ass-backwards.
Let's take a look at some of the players in this Health Stasi perverted posse and their O.K. Covid Corral standoff ... 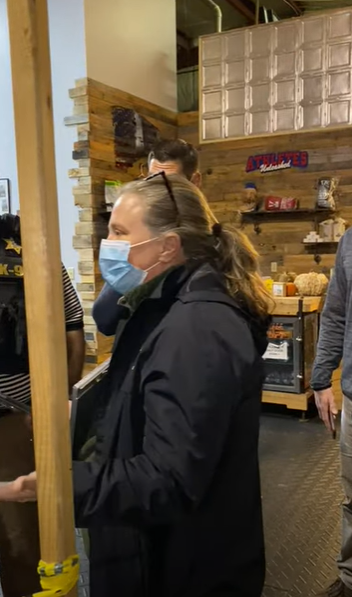 Above: The bovine "health emergency" whatever she is for the City of Buffalo looking like a Roseanne show reject. Mooing her way in with her police bodyguards, she's there to "uphold the law" -- i.e., Andrew Mafioso Thug Cuomo's ever-more flagrantly unconstitutional and destructively counterproductive "health emergency" diktats. 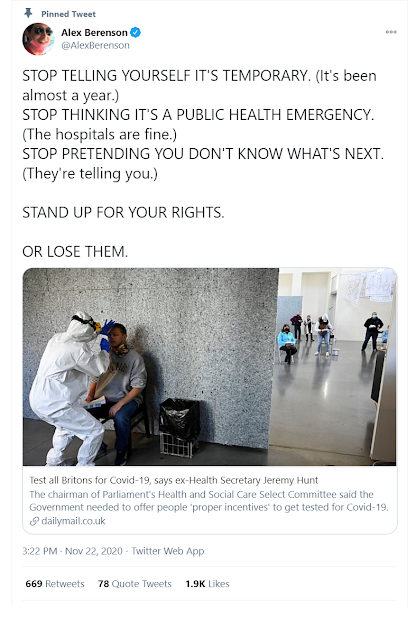 The real purpose of these diktats, of course, is to stimulate the CNN erogenous zone of his meathead exhibitionist younger brother, Chris Cuomo, and the homosexual dynamic duo of Anderson Cooper and Don Lemon -- while simultaneously keeping the populace in terrified paralysis. The purpose of the latter, of course, is for untrammeled and open-ended Democrat control. 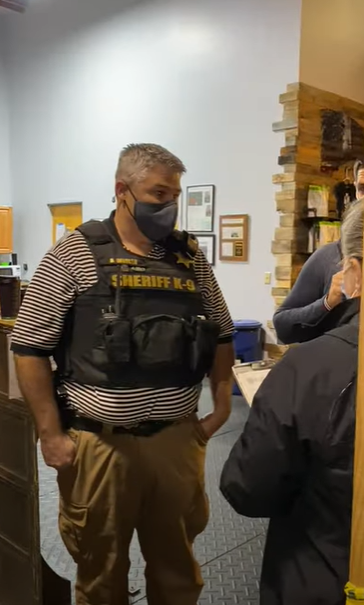 Above: One of health department cow's cops, specifically, the morbidly obese one who looks like he's about 11 months pregnant with a Hefty bag filled with wet oatmeal. No stranger to "sheltering-while-binge-eating-in-place," he really needs to rethink horizontal stripes. Unless he's purposely going for that bull walrus look. Maybe he's "in" to that. 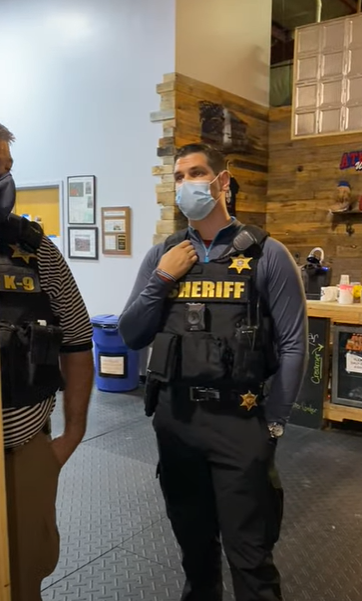 Above: OK, here we have the frat house beer pong champion turned jacked up idiot cop. Just look at him. Care to guess how many applications of Aqua Velva hair care product was involved in that look? It wouldn't surprise me if he's even functionally illiterate. And, no, grunts and "X's' on a piece of paper don't count toward literacy. 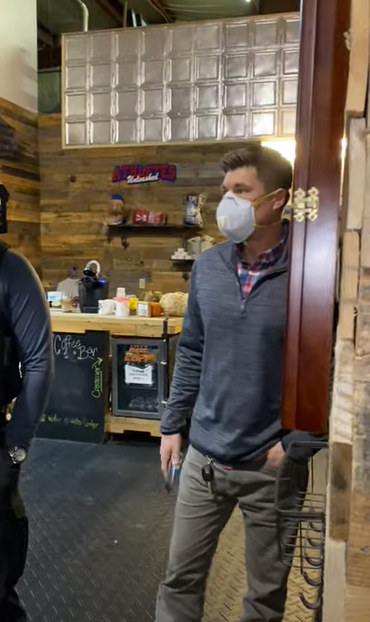 Above: No idea who is this clown but clearly he shouldn't be permitted to reproduce. Looking at him, the word "numbnut" comes to mind.
Of course, they'll be back. It's all part of Democrat criminalization of everything and weaponization of law enforcement -- except when, perversely, Dem pols are trying to "defund the police" for purposes of "social justice." So much self-contradiction and stupidity. But the point here is that these health stasi will be back with court orders. But that's good because we desperately need to get this extra-constitutional garbage in the courts, both state and, more importantly, federal. 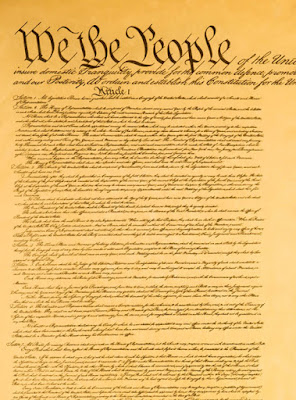 And that's the key point whether the fucking hateful, totalitarian control-fixated libs like it or not: There exists a certain United States Constitution, and it does NOT allow an infinite and open-ended "public health emergency" for the sake of whatever some shitty Pelosi Democrat pol and would-be dictator wants to do on whatever pretext.
And if the neutered, compromised, and ineffectual state courts won't do it, the federal courts will. It will just take a while. As these things always do. 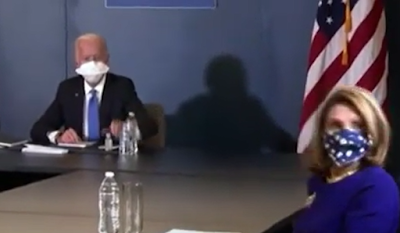 Above: Pervy Joe in his ever-more-dementia-addled, irascible senility and hateful Botox Nan, the giants who will be in charge of the federal government (especially if the Republicans were to lose BOTH Senate seat races in Georgia). 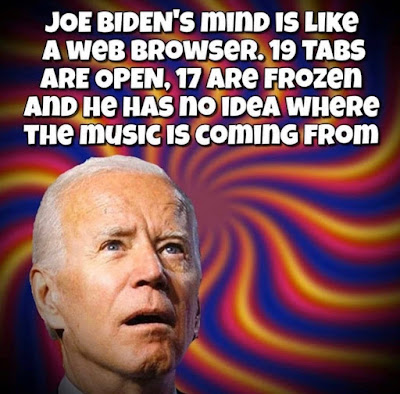 Hahahaha ... Just FYI, to get political images like this, you have to use Bing since Google simply won't let you find them.
Creepy Joe probably should get that Covid vaccine as soon as it's available because he's one ill-directed fart away from contracting the disease -- and given his age and desiccated, senile state, he's genuinely at high risk for contracting Covid-19 from the SARS-CoV-2 virus.
Now, as a recovering liberal, I get the fact that the Dems only know and love ONE amendment: The 25th. And they know it because it's what they believe is their quickest legal ticket to a coup. 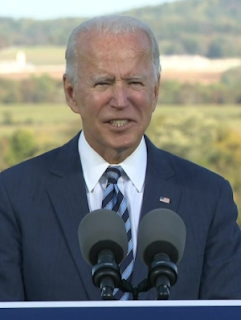 Originally, they wanted it to get rid of Trump but, within a year, to get rid of Pervy Joe and install Kamala the Hateful Harpy Harridan as that she-male BIPOC-as-President of the United States. That's the only thing libs live for: Critical Race Theory racist garbage in action with various political and job slots to be filled based upon race, sex / gender, and other Big Academia-approved biomarkers.
Speaking of sheriffs and pushback against these flamboyantly unconstitutional Democrat governor diktats, there is finally some meaningful pushback in California against Governor Gavin "Feminine Itch" Newsom's endless garbage edicts. 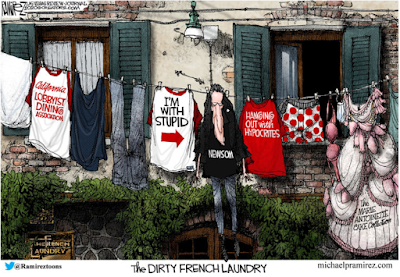 Hahahaha ...
I refer to the multiple county sheriffs in California including the Los Angeles area who have mae it clear they will not carry out the various edicts Pussy Newsom has put into place for his Covid-1984 bullshit. These include limits on the number of people in private homes for Thanksgiving and that stupid 10 p.m. curfew -- a curfew that conveniently excludes "the entertainment industry," i.e., Newsom's Hollywood crowd. 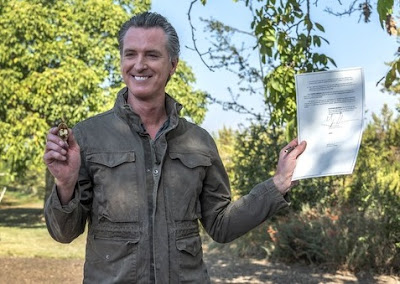 Look at what a weird giraffe-like neck Newsom has.
Of course, such pushback "triggers" the worst of the worst totalitarian wannabe ass-wipes in the media: Chris "Truth and Reconciliation Commission / Metrosexual Pussy" Hayes; Rachel "Mad Cow Demands Taxpayer-Funded Abortions On Demand" Maddow; Anderson "Mr. Glorious Vanderbilt" Cooper (D - Vagisil) ; and Don "Dumber Than a Box of Rocks" Lemon. On that last point, it's impossible to overstate how embarrassingly dumb is Don Lemon. 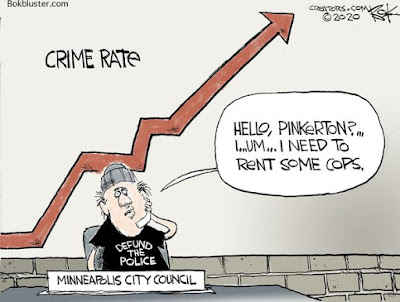 These media celebrity ass-wipes are the key drivers of this Branch Covidian garbage. Just like they are the drivers of the WOKE Maoist Cultural Revolution and spent months encouraging rioting and looting by Antifa vermin and BLM thugs. 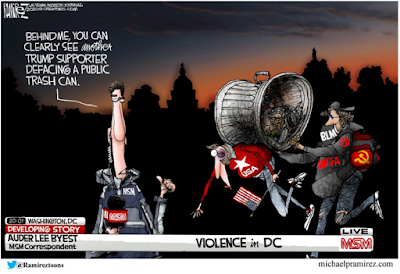 The practical effect of this Big Media Branch Covidian cult has been to obliterate vast and varied swathes ofsociety with catastrophic resulting damage. On its own terms, this is supposedly all so that some Alzheimer's-racked 85-year old woman or 400-pound wheelchair-bound huffing and puffing blimp can live in agony for another 6 months. In actuality, it's to facilitate Democrat open-ended power grabs with North Korea-levels of social control. 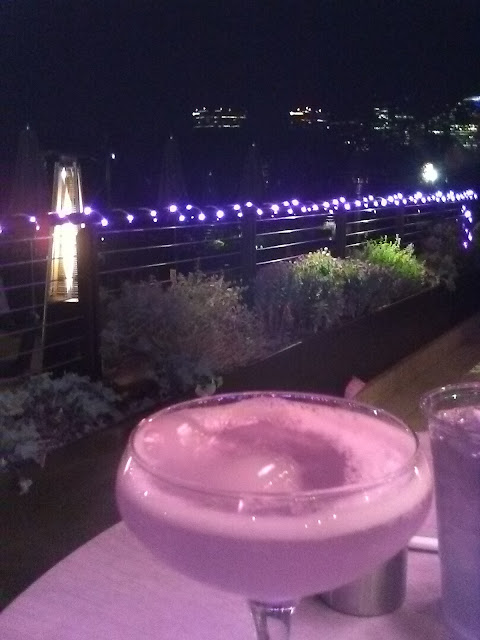 OK, the above image and the next five similar ones below were taken by me on Friday night as I sat at a small table beside the outdoor bar at Sequoia restaurant in the Washington Harbour complex of Georgetown here in Washington, D.C. Along with dinner, the drink I ordered was a scarlet fog. It's a sweet vodka-based drink and quite tasty. 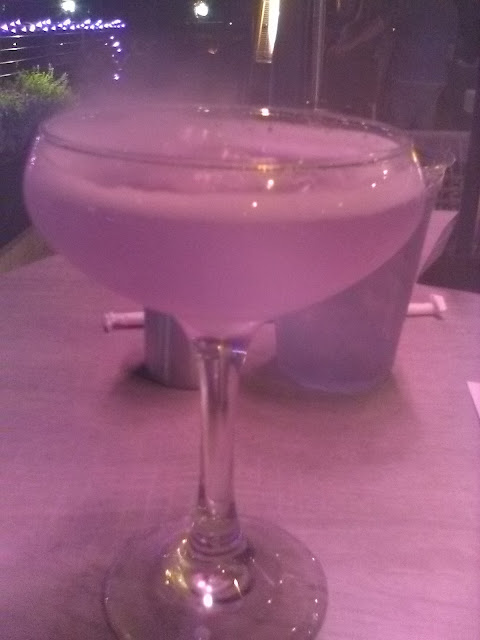 Actually, I ordered two of them, plus a Long Island iced tea latter before walking home. The drink included a tiny ball of dry ice at the bottom of the glass. I was worried I was going to swallow the dry ice but it stayed firmly down in the tiny bottom "well" of the glass. I don't want to find out what happens if you drink dry ice. 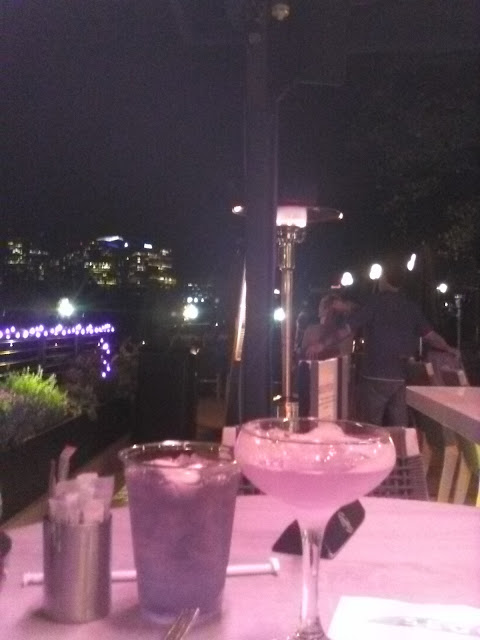 The sublimating dry ice bubbling up through the drink and visibly outgassing really kept going for a while. Oh, yes, the skyline on the other side of the nighttime darkened Potomac River is Rosslyn (Arlington).
*******
Before I wrap up this entry, I would like to say a few more words about North Dakoka and South Dakota (and Andorra??) and the potential time to SARS-CoV-2 herd immunity ...
I made a spreadsheet making an estimate of the time until herd immunity for North Dakota and South Dakota based upon information through yesterday, Saturday, November 21, 2020, as taken from the Worldometer pages: 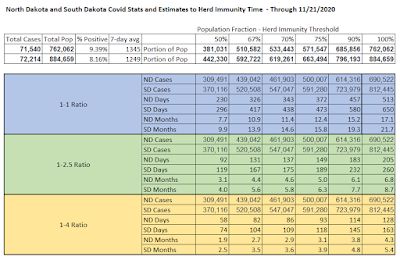 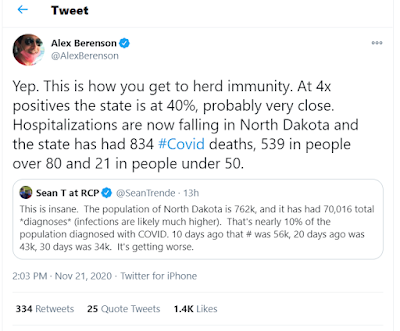 To be clear, the latter assumes that the entire population in those states was tested using the admittedly problematic 40-Ct PCR test. Also, this says nothing about the number of hospitalizations or deaths (which are wildy skewed toward the very old and sick, as the Alex Berenson tweet below suggests). 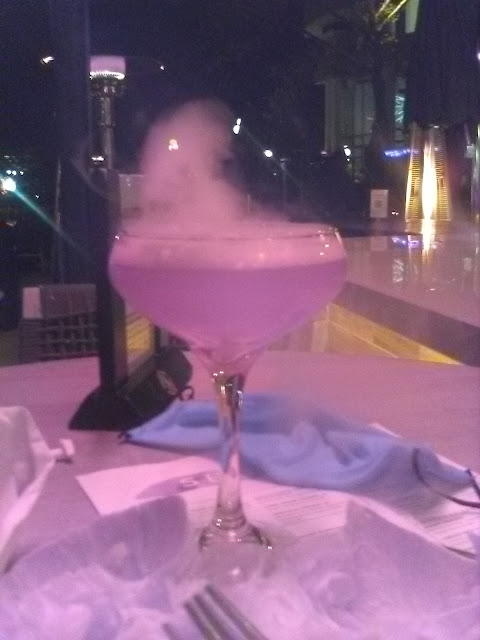 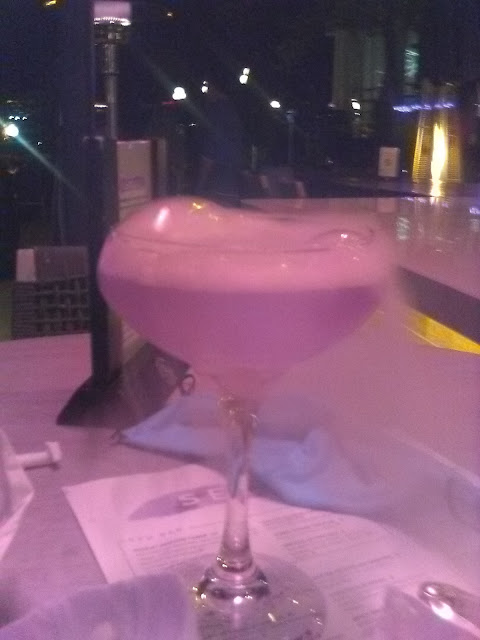 For number of daily positive test results, I used the 7-day average of 1,345 and 1,249 for North Dakota and South Dakota, respectively. This is a number that, I realize, changes every day. Oh, and it is "positive test results" -- NOT "cases," since the 40-Ct makes any determination of how infectious is a person impossible (i.e., is it "live virus" in them or random bits of remnant RNA nucleotides). 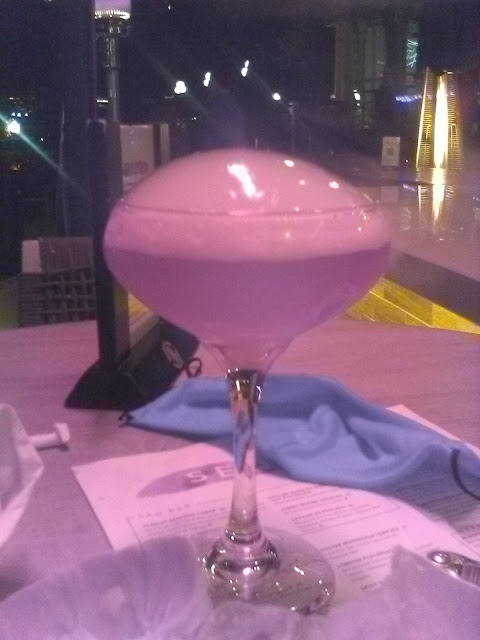 The results for time-to-herd-immunity suggest anywhere from an extreme upper bound of ~21 months in South Dakota (100% of the population at 1-1 ratio) to just 2 months in North Dakota (50% of the population at 1-4 ratio).
A 1-2.5 ratio gives results in the 4 to 6 month range. And if it is 1-5 (a case I didn't include), then you would expect to see the total daily positive cases start to drop basically now and going forward.
This ignores people who are getting duplicate tests -- and may test positive one time and negative another. Unsure if that's a major issue. 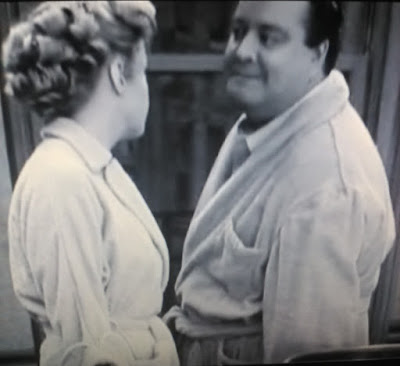 The larger point is that North Dakota and South Dakota (plus, I guess, Andorra) are doing a sort of natural experiment that should produce an answer, finally, on the question of when herd immunity kicks in -- and how widespread is the virus (either active "live" virus or just remnant bits of RNA).
OK, that's all for now. 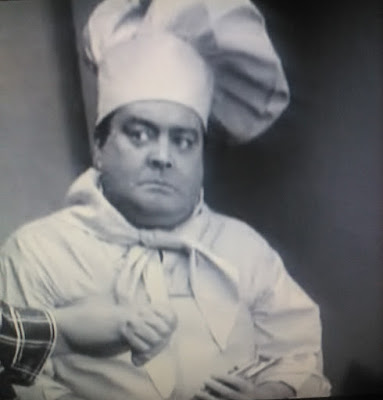 Looking ahead to this Thanksgiving week, I am going to visit my mom in Glen Burnie -- taking the MARC train up to Odenton or BWI (to be determined) on Tuesday and returning here in Friday.
For Thanksgiving itself -- which coincides this year with my (51st) birthday, a fact I dislike -- our plan is to go to the American Legion hall in Severna Park for one of the ready-made dinners. At this point, I think the place is still having it -- just organized into "sittings" for the sake of the current media pandemic and Larry Hogan's Democrat-like overreaction. 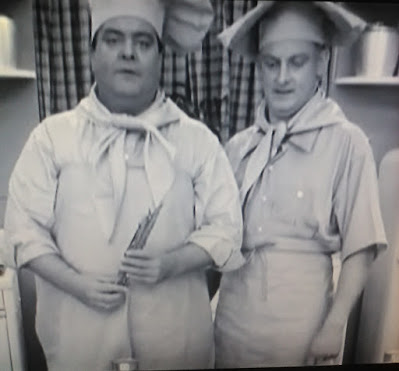 OK, that really is all for now. Time to watch my late night TV shows in MeTV, Cozi TV, and Antenna TV. I may also try to do my laundry. As for how my weekend went, it was fine but I'll have to write about that in another entry.
Christ, this entry took forever to compose.
--Regulus
Posted by Regulus at 10:05 PM