Thoughts on the Eve of the Presidential Election of 2020 : Corporate Oligarchy, Branch Covidians, WOKE-Frenzied Marxists, and Big Media/Big Tech Versus the America We Once Knew -OR- Last Possible Checkmate to The Great Reset 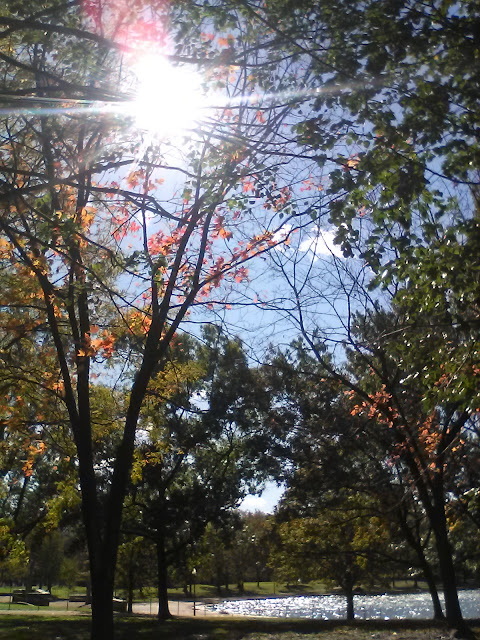 Sunlight on a brisk and windy fall day, Constitution Gardens, Washington, D.C., 12:23 p.m. November 2, 2020
The pictures in this entry are those taken by me on various walks mostly here in D.C. over the past two weeks, including earlier today en route into the office, along with some I took in Silver Spring on Oct 20th. I'm not captioning them, but the file names contain time and place location.
******* 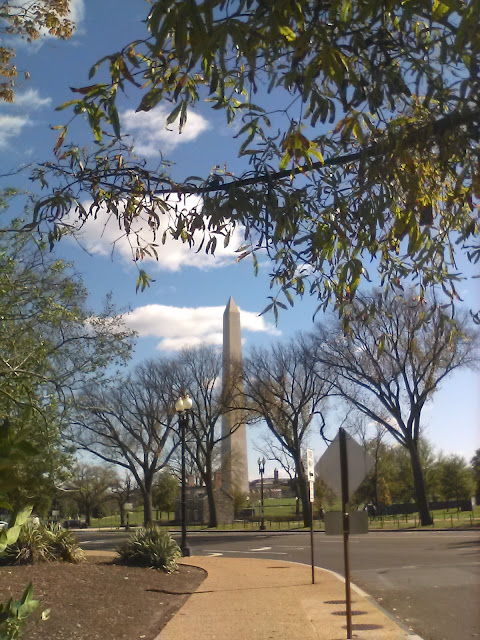 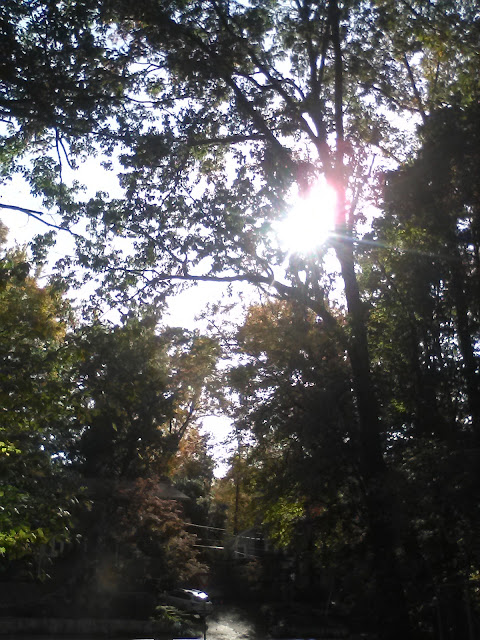 And I can honestly say I have NO idea what is going to happen.
For starters, there has been a months' long carpet-bombing campaign of polling results from outfits in the pay of Big Media and/or appendages of Big Academia showing cartoonishly big margins for Joe Biden. The whole thing has been much more of a Big Media / Deep State PSYOP than anything else. But at this point, most of the anti-Trump forces fully believe their own reality, namely, that Biden will win in a blowout. 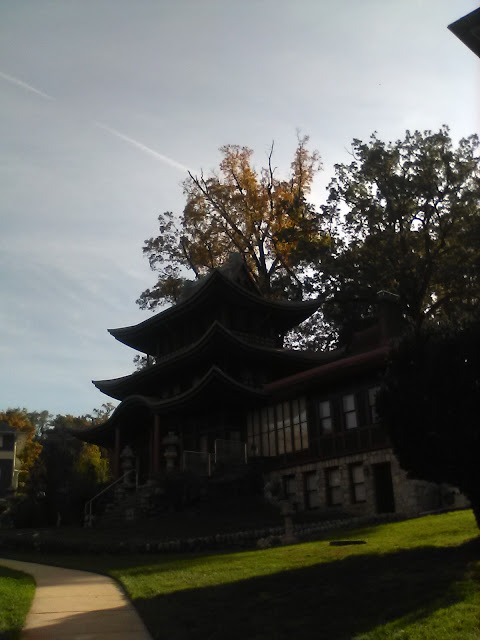 The hateful Illiberal Left, until a few days ago, was literally 110% cocksure that it was going to win in a Biden blowout that swept away Trump and the Republican Party (except for the Quisling Never Trumpers). And, well, most of them are still confident, although not quite as confident. 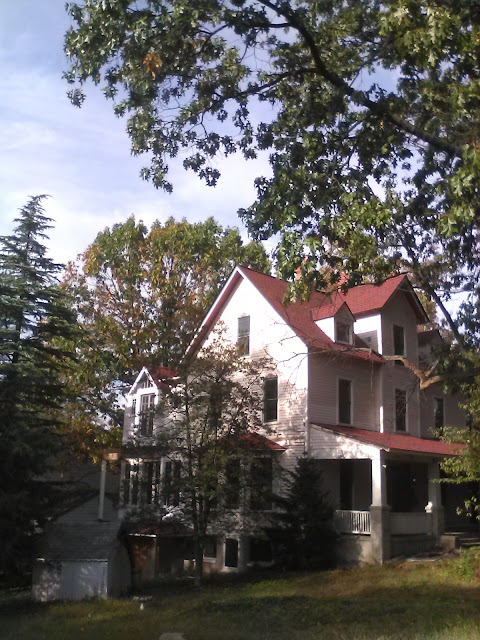 But it is also the case that the massive early voting -- nearly 100M votes cast in person or via mail-in, or nearly three-quarters of the 2016 vote total -- has allowed for a level of comprehensive analysis ahead of actual election day unheard of in any previous presidential election. 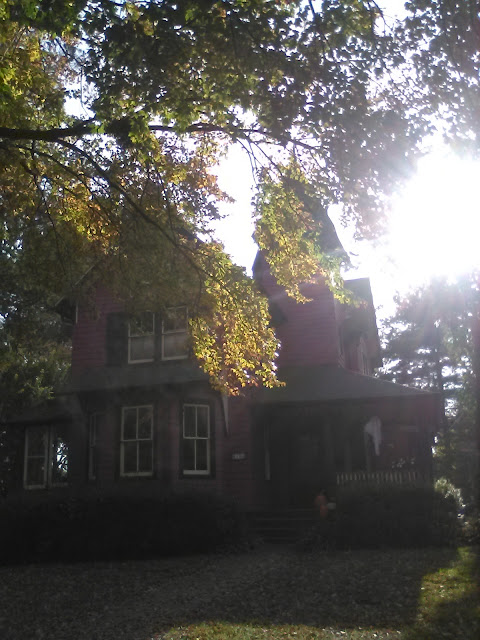 And through tremendous analysis (plus, necessarily, some major assumptions) by folks at RedState.com and Townhall.com, not to mention individuals such as Larry Schweikart, all the signs point to a major overperformance by Trump and underperformance by Biden in the crucial swing states to include Florida and Pennsylvania, and possibly even Michigan, Arizona, and Minnesota. 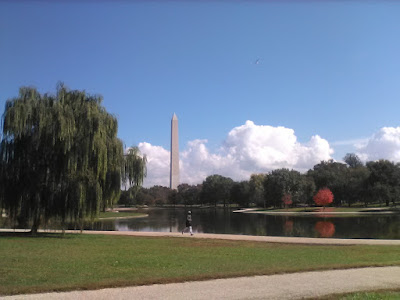 As two late examples of this sort of analysis of early voting data, here is a piece on RedState.com by Scott Hounsell and here is piece on Townhall.com by Katie Pavlich. 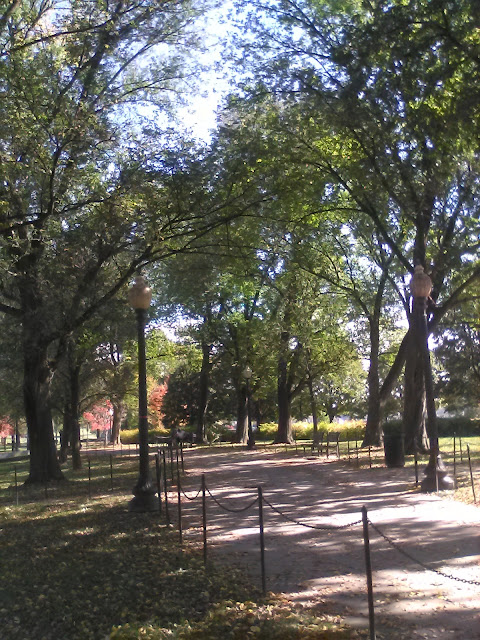 What's more, the wild enthusiasm and massive rallies for Trump -- all of the hateful Illiberal Left media have variously ignored, dismissed, pooh-poohed, or hate-speech criminalized as ragtag bands of white supremacists -- even while Democrat state and local pols and their legal goons (such as in Minnesota) have attempted (mostly unsuccessfully) to just ban rallies on sundry, infinitely malleable Covid public health emergency pretexts -- cannot be denied, dismissed, or medically doxed away. 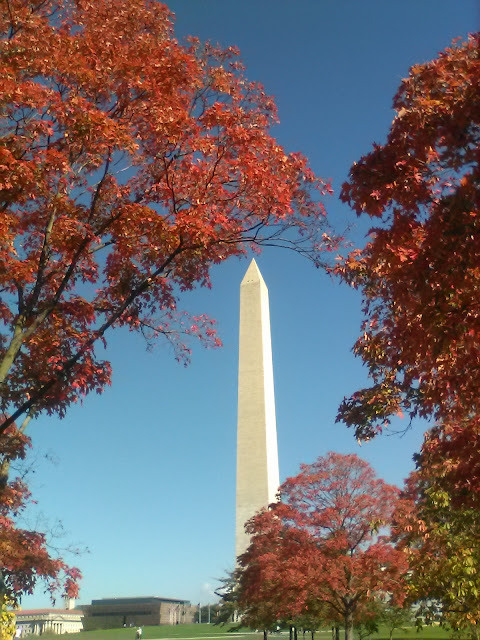 Yes, there has been much medical doxxing with hysterical "reporting" about mass deaths resulting from "Covid superspreading" Trump rallies -- all of which are pure horseshit, but which Big Media and Big Tech platforms (presently frightening "all in" for Biden) keep pushing. The kernel of "truth" in all of those are projections from bogus Covid modeling outfits including the worst of the worst, UW's garbage IHME model. 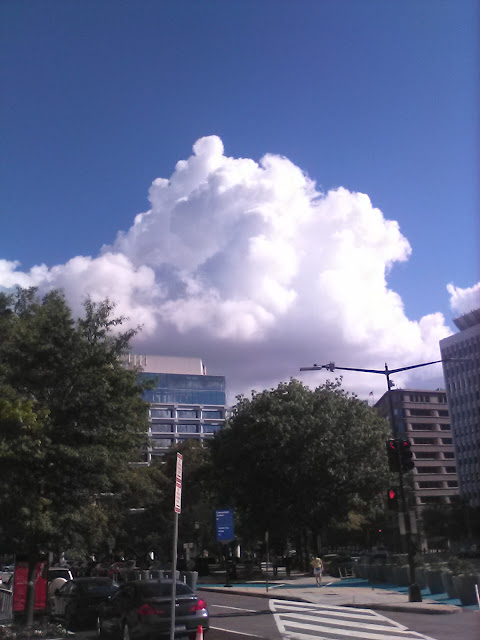 The point is, there appears to have been a very change in momentum in the key swing states -- focused on Pennsylvania -- toward Trump and that is evident in the fact that his handlers have nixed creepy, dementia-addled Joe Biden's "all basement" strategy -- resulting in lots of those pathetic non-rallies featuring sad circles and six massively masked people. As for his 25th Amendment-in-waiting VP, Komrade Kamala Harris the Hated Harpy from Hell, she is truly a demon bitch. 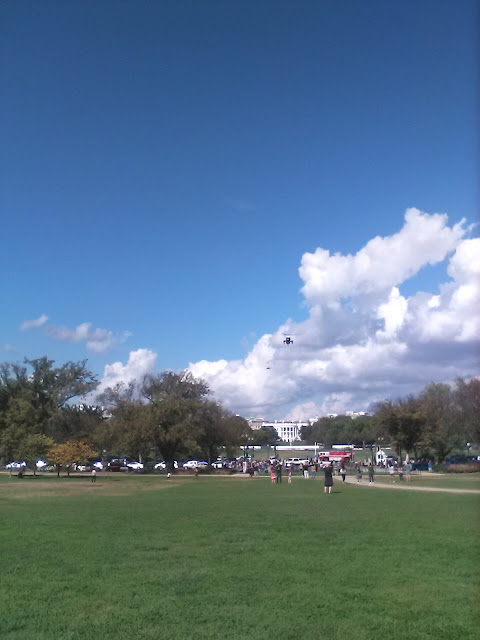 Above: Marine One taking off from the White House, 2:06 p.m., October 23, 2020. I was walking across the Mall and based upon the Secret Service and Park Police activity and people standing around waiting that Marine One was getting ready to fly overhead -- although I thought it would be flying inbound and didn't realize the helicopter was already on the South Lawn until it revved up. In this picture, you can see another more distant helicopter approaching -- part of the trio formation they always seem to do.
******* 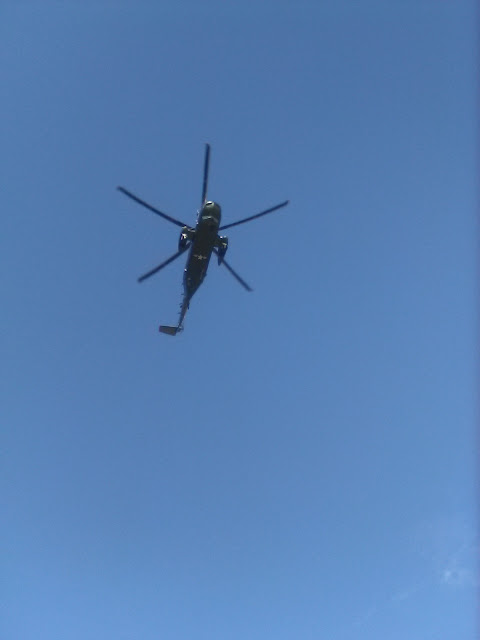 Marine One flying overhead near the Washington Monument. Of note, the helicopter looks more much impressive in real-life than in a freeze-frame image in which its rotors appear frozen. Anyway, President Trump was on that helicopter about 200 feet above me.
******* 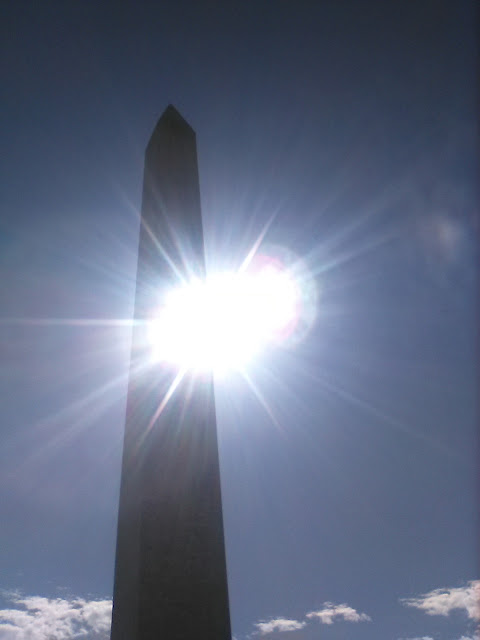 There has been enough of a shift that in the "momentum" that even Alex Berenson -- who through his twitter feed has been my lifeline in the time of soul-crushing "Branch Covidian" insanity, but who has been highly dubious of Trump's chances and focused on those polls -- has noticed. I mention this because Berenson has consistently played up the polls showing Trump way down and assumed an easy, big Biden victory. 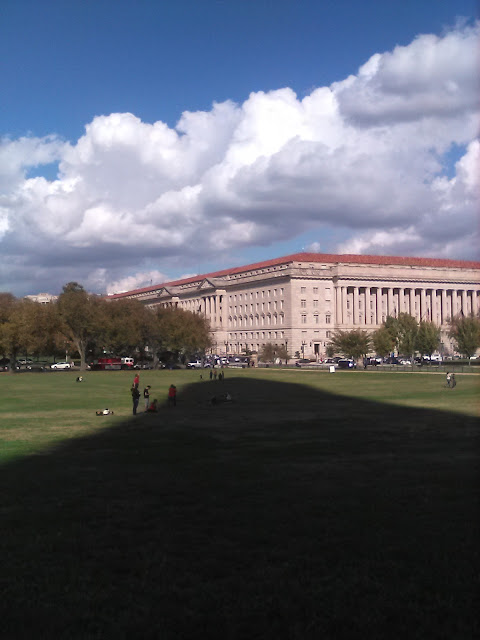 But I should point out that these Republican analytical pieces are assuming quite high in-preson voting day turnouts by Republican voters, that early voting "Dem" versus "Rep" party affiliation data (in states where it is available) are good proxies for how people vote, and that independents won't break too wildly for Biden. In short, there are many assumptions here that could end up just wishful thinking. 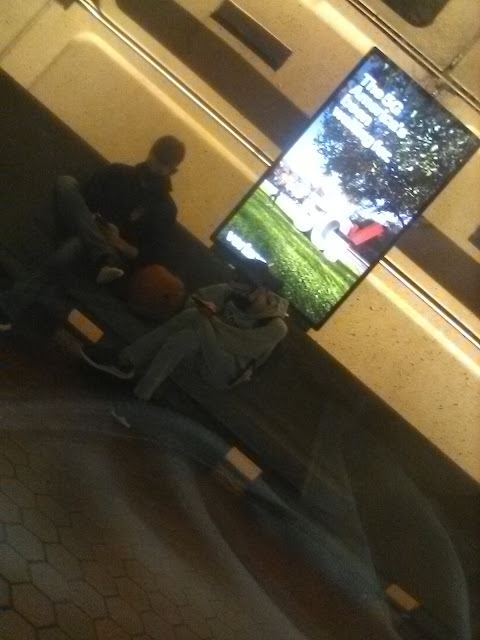 And then there are those polls: A never-ending carpet-bombing campaign of polling results -- courtesy Morning Consult, Quinnipac, New York Times, ABC/Washington Post, NBC, CNN, and on and on -- that have shown for months, years, an impending Biden blowout / landslide victories on par with Johnson in '64 or Nixon in '72. And Nate Silver -- who I personally think is a dickhead who went from being a solid statistician to an opinionated Media Talking head, but whose statistical expertise has to be reluctantly respected* -- is convinced that it's all over already except for the shouting and that Biden will easily win.
*In this way, Nate Silver and Fuckhead Fauci are quite similar in how the American mass media / entertainment / celebrity culture morphed them into something ugly. 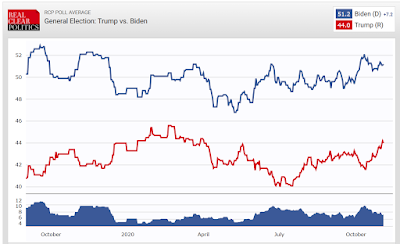 Putting it all togther, as this moment, I suppose Biden will win because Trump is simply too unpopular, too hated, and too many forces are arrayed against him to include the phony media pandemic itself. But I can't with complete confidence Trump is finished. I just don't know. 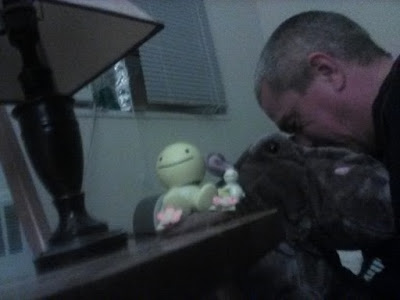 But what I do know, though ...
The election is occurring in a time of a media-fanned pseudo-pandemic and Democrat-fanned extreme civil unrest in America's big cities, accelerating their collapse from economic and cultural powerhouses to suffocatingly WOKE, dangerously unlivable, quasi-Marxist panopticon dystopian hellscapes. 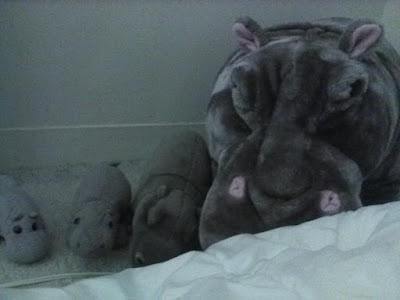 It's that long-dreaded New World Order that features the arrayed forces of Oligarchy (Big Media, Big Tech, and Big Retail E-Commerce, plus the larger Davos / World Economic Forum set); the Medical and Health Industrial complex (Big Pharma and Health Bureaucrats with infinite power). They are in an demonically unholy polygamous marriage with the forces of Cultural Marxist WOKEISM (whose foci are Big Academia, Big Media, and Big Entertainmnent) and the older Military / Industrial complex with its eternally warmongering "Deep State" cabal. All of this is arrayed against a conservative populism embodied in, of all people and historical ironies, Donald Trump. 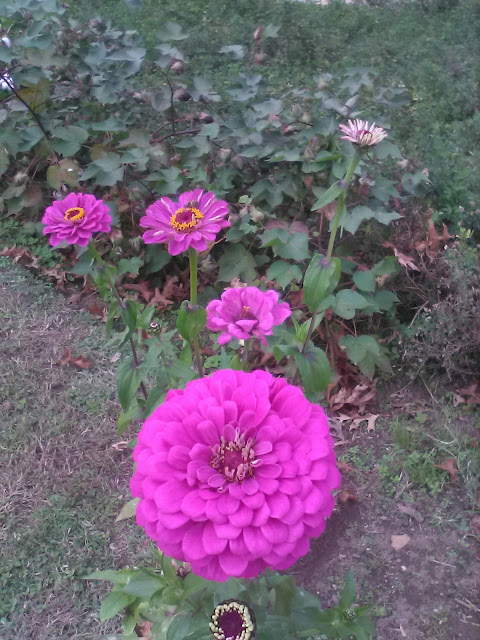 This malevolent four-way union is violently exploiting the media-fueled Covid pseudo-panic in a sort of Reign of Medical Terror, using the "authority" of the Medical and Health Industrial Complex to spread endless fear and murderously self-destructive lockdowns -- but for the sake of what is ultimately "The Great Reset" (you can read about that here). 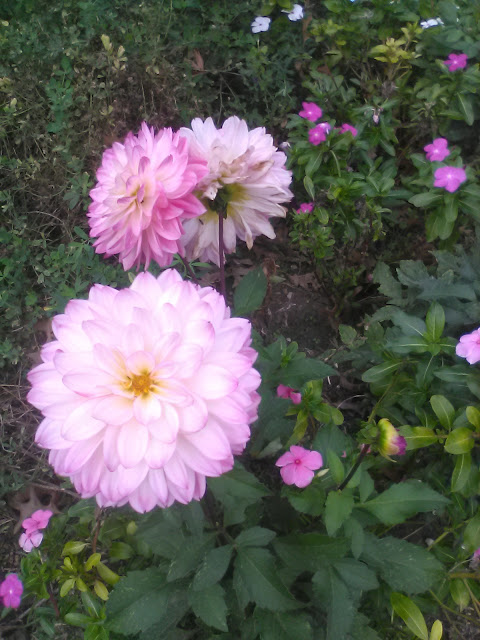 The end game, such as it, is a sort of Techno-Marxist dystopian state maintained, at least in its U.S. incarnation, by a frenzy of identity politics and Critical Race Theory that obliterates any concept of the American Dream and replaces it with self-loathing, transexually-liquefied s/he-male young Millennials and Gen Z sorts who serve as the Antifa and BLM street shock troops of the Pelosicrats. (I say "such as it is" because this world-spanning virulent configuration could never actually work in a long-term stable way, but God-only-knows what it produces.) 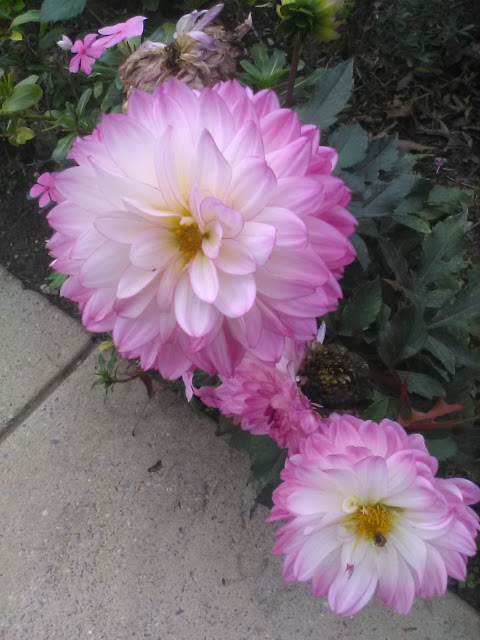 Suffice it to say, it all suddenly makes such sense what is happening, namely, this monstrous hydra defined by cultural suicide and WOKE genocidal racism is on the verge of a complete victory via a Covid-facilitated "flu d'état" for its Khmer Rouge-light "Great Reset" New World Order scheme. 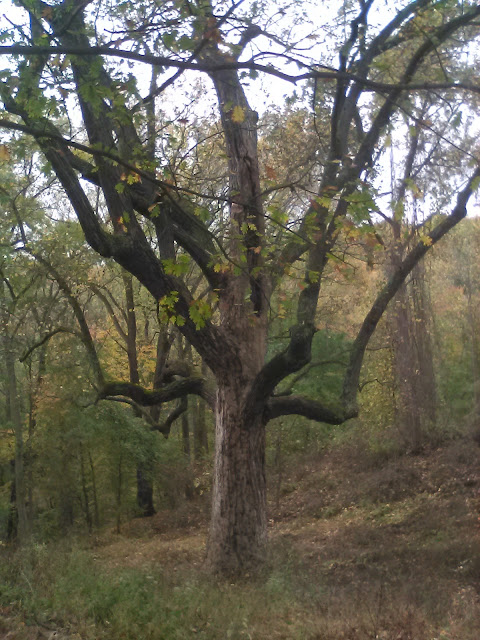 I will say that on a personal level, I am highly concerned about what might happen here in D.C. in the next 48 to 96 hours. All of downtown is boarded up in anticipation of significant violence. Ditto in other nearly 100% Democrat Big, Blue garbage cities. 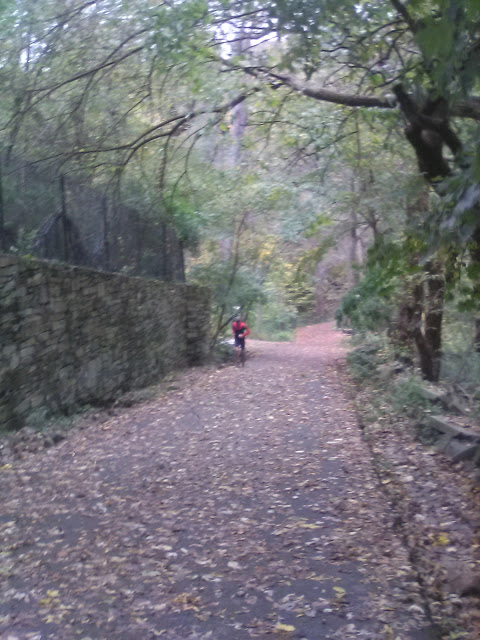 Of course, the dick-bags at CNN are busy blaming this on Trump and his supporters when, in fact, there are few Trump supporters in D.C., and none who are organized and ready to commit violence in the fashion of Antifa / BLM. 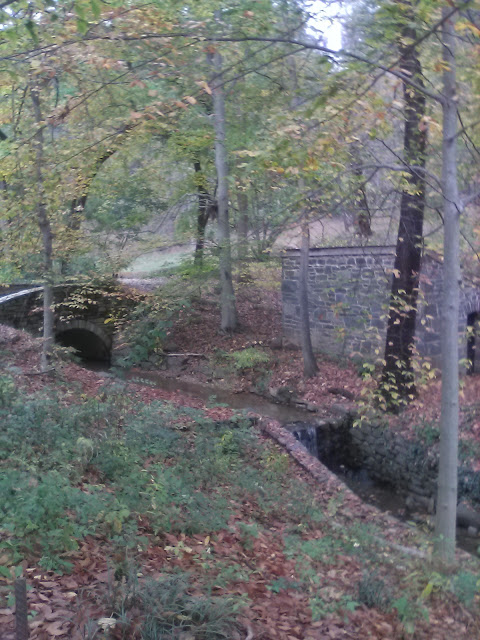 On a personal note, my plan is to move the fuck out of D.C. early in 2021 -- either to Alexandria or Arlington (the latter tentativefly as a one-year prelude to the former). But this is more because I can't abide the fucking outdoor-masked and terror-laden Covid paranoiacs, especially the YOUNG, WHITE, and WOKE females, and their cult-like, suffocating fundamentalist environment. 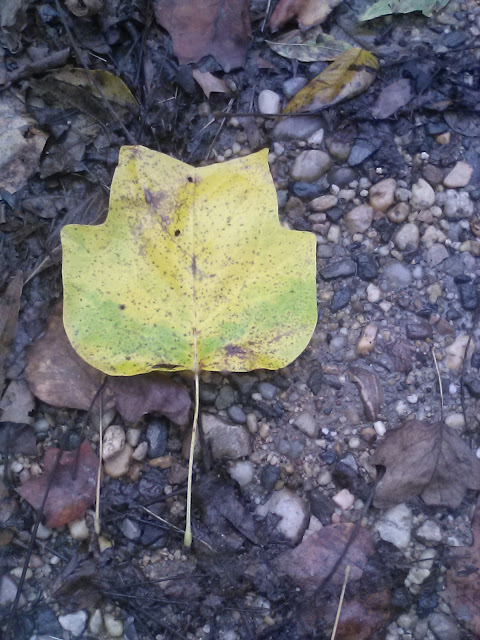 The society that they have created is inhuman and disgusting -- and will it NEVER end. What's more, if Creepy Joe and Komrade Kamala win, as expected, then expect endless Fauci-sponsored lockdowns, especially in all-Democrat jurisdictions such as D.C. (that is, except for the times they need mass rioting and looting for purposes of social control and dissipating pent-up rage by the eternally locked down).
At some point, I really might have to move to a city in a Red State -- maybe Fort Lauderdale, Fla., or, hell, even Nashville, Tenn. 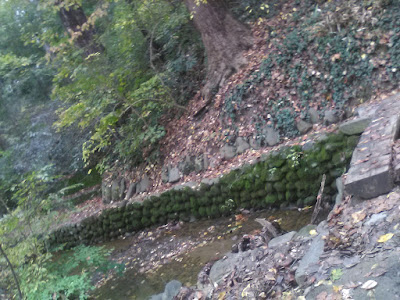 I'm signing off for now, but let me just add that by my next entry, I and the world should have some sense of how the election is going. Keep in mind if there is any sense that it ISN'T going as the malevolent hydra seeks, expect the Democrat pols to set lose their Antifacrats in the form of a real insurrection as they go bat shit crazy to stop a second Trump term. 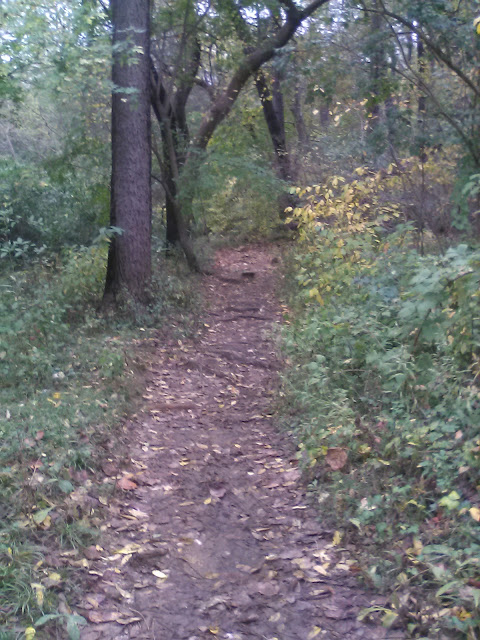 And, of course, anything less than an obviously insurmountable outcome in Democrat-run states -- especially Pennsylvania, Michigan, and Minnesota -- will result in vicious legal warfare that could just end up in the House of Representatives (since, I have a feeling, the U.S. Supreme Court is going to do everything it can to avoid being the final arbiter). 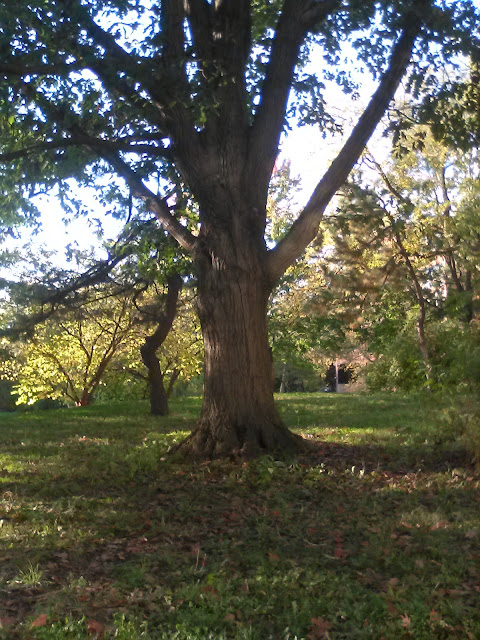 It is worth noting that the main Big Tech outfits -- Twitter and Facebook -- have outright said they will be censuring any political figure or media outlet that "calls" the election "too soon" -- i.e., in any way that they don't want to hear.
Yes, that's where we are. And it will be a whole helluva lot worse if the election goes for Biden and the Democrat / Great Reset oligarchs. 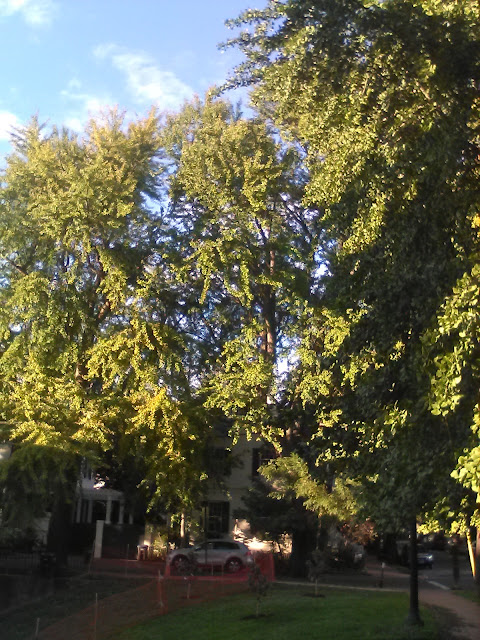 OK, that's all for now in a destroyed time. Right now, I'm just watching my late-night TV in my little lamp-lit apartment somewhere in Washington, D.C., kinda near Georgetown. It's Perry Mason time on MeTV.
--Regulus
Posted by Regulus at 11:59 PM