Another Lengthy, Delayed "Brief" Update: The Whys of My (Non-Moving) Decision; Cont'd Covid Crap But With Interesting North & South Dakota Herd Angle; Gavin Newsom, Human Feminine Itch Spot; and The Blue and The Red, Then & Now 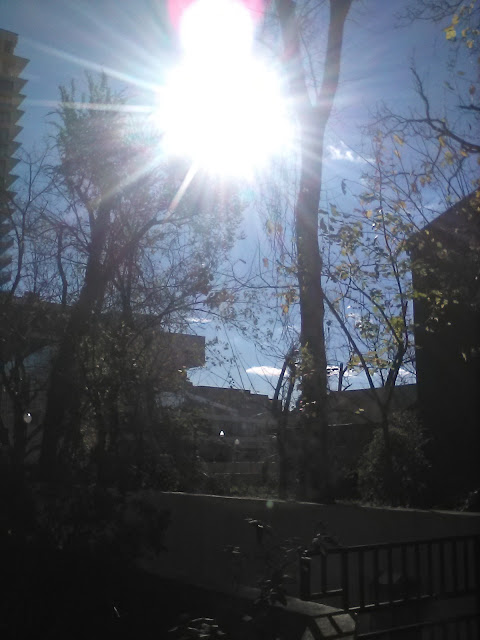 Brilliant, low-angled sunlight on a blustery afternoon, Rosslyn, Arlington, Va., 1:37 p.m., November 18, 2020
OK, as often happens, I began this entry early afternoon with the intention of a quick update but instead, I didn't finish it until late at night with the delay due to the usual metastasizing of the post into a sprawling, multi-topic one.
Also, as usual, the pictures in this entry are those I took while out and about -- in this case, on my Wednesday trek over to Rosslyn (Arlington). I am not captioning them but the file names contain place/time information. 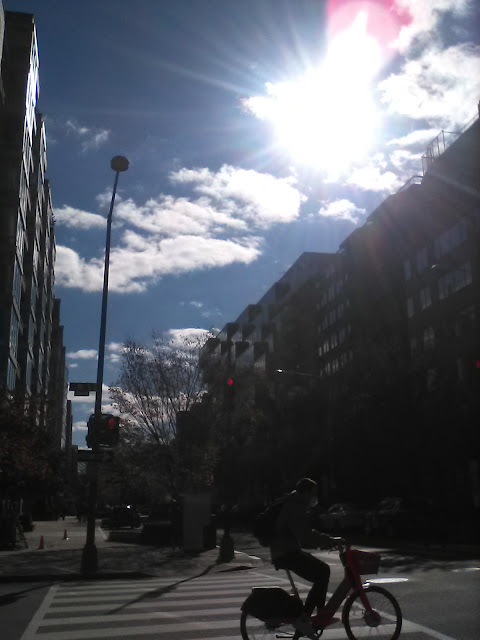 This is just a quick noon hour entry update ...
So, I have decided NOT to take the apartment in Rosslyn (Arlington) but instead to remain in this apartment for a it longer -- at least into 2021 and certainly until my lease is up at the end of January.
It turns out that the place I thought I was going to move -- Colonial Village West, one of the two rental components of the sprawling Colonial Village complex that is separated into five distinct components, three of which are condominiums (Colonial Village I, II, and III), is actually just Section 8 / low income housing.
Until yesterday, that was not at all clear to me. 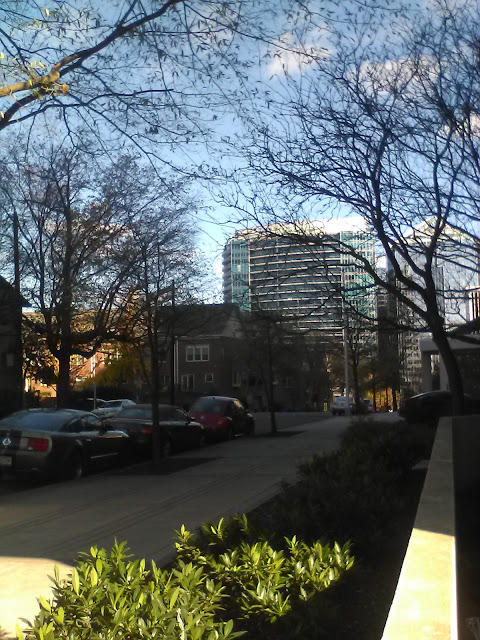 Instead, my would-have-been apartment is in what is called the Key Apartments located not at the edge of Rosslyn but in Rosslyn proper (a section of Arlington County) along Key Blvd.
The apartment itself -- a one-bedroom corner unit facing north and east -- was fine, albeit a lot bigger than what I need. (Now just a week away from my 51st birthday, this year annoyingly falling right on Thanksgiving, I have pretty much become fully in sync with living in efficiencies.)
Indeed, I liked the apartment, not to mention the unexpectedly residential view facing onto 19th Street N.
What's more, the location was great -- a short distance from the Rosslyn Metro and the Key Bridge crossing to Georgetown. It also was a hilly section of Arlington that combined with urban-residential feel actually gives about a close a hint as you are going to get in this area of one of the genuinely hilly cities such as Pittsburgh or (in its very different setting) San Francisco.
This includes those steeply sloping avenues and outdoor steps or stair cases that connect streets at two different elevations, as the image directly below shows. 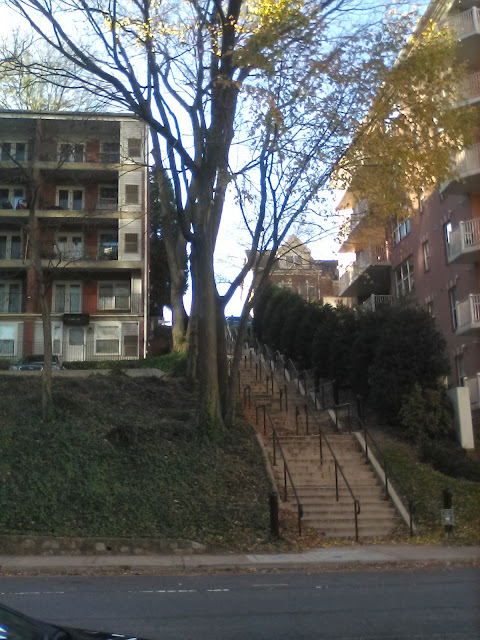 However, in the end, I just decided to remain where I am. The reasons are various and not all really rational.
For starters, there was no need to rush into a more expensive place (the higher rent and electricity cost would have been about $150 to $200 a month higher) even before this lease is over.

UK Spanish flu and pneumonia deaths per 1,000 people from June 1918 - May 1919 showing three distinct waves
Moving is a big hassle, of course, and all the more so as the Covid-1984 mostly media pandemic reaches what I expect will be a frenzied climax in the next three to six months followed by a weaker and likely final third wave (or fourth, depending on how you're reckoning it) in spring/summer 2021. I'm basing this on my hunch that the positive cases (rather than the death toll) will mimic the UK Spanish flu death toll triple curve. (Just FYI, Chester pointed me to this curve. It is shown in the image above, and you can see it in the image below.) 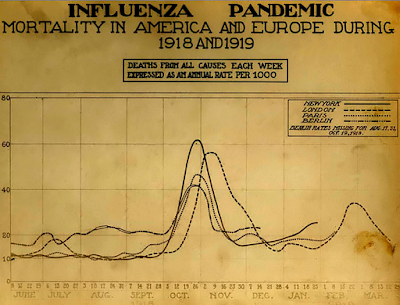 A chart of deaths from all causes in New York, London, Paris, and Berlin, June 1918 - March 1919 showing the 1918 Spanish Influenza pandemic peak in October and November 1918
And it will do this no matter what garbage and shit these out-of-control totalitarian wannabe Democrat Governors try to do in their states by way of lockdowns and weird, flamboyantly unconstitutional edicts. I refer to the ones dictating about how many times you can chew your Thanksgiving dinner with or without your mask on or how many times and in what direction you can wipe your ass after being at stool. 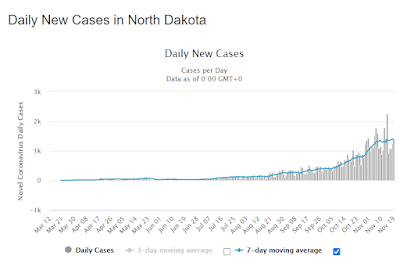 North Dakota Wuhan Laboratory Cheap Knock-Off Hybrid Pangolin and Bat Flu SARS-CoV-2 ("Covid-19") daily positive test cases with 7-day rolling average, 12 March - 19 November 2020
Curiously, I realize that it might just be the case that North Dakota and South Dakota are states to keep an eye on in terms of new cases and deaths since those two are the closest to statewide herd immunity based upon the percent of the entire population that have tested positive (9 and 8 percent, respectively). 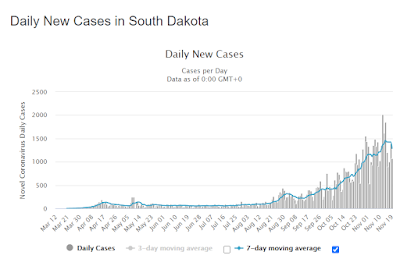 South Dakota SARS-CoV-2 ("Covid-19") daily positive test cases with 7-day rolling average, 12 March - 19 November 2020
A quick calculation using different ratios of positive test cases to surmised total cases and holding the current ~1,300 cases per day seven-day average, you get anywhere from two to eight months until herd immunity without any vaccine. And, yes, this assumes no reinfections and new strains and all that shit. But I digress ...) 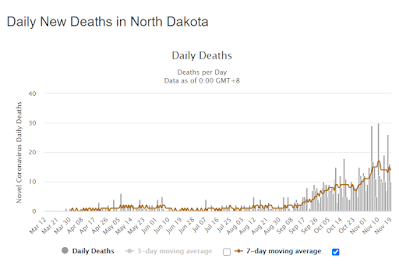 North Dakota Covid-19 daily deaths with 7-day rolling average,
12 March - 19 November 2020
I am presently in a VERY convenient, centrally located, and reasonably priced place that is FAR better than that Hampton Courts hell-hole at WOKE / CIVIL UNREST D.C. CENTRAL (i.e., near 16th and U Streets NW, the U Street Corridor, and fucking Columbia Heights). 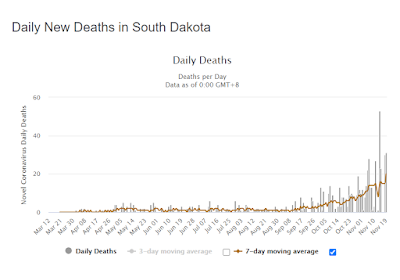 South Dakota Covid-19 daily deaths with 7-day rolling average,
12 March - 19 November 2020
Just moving across the Potomac River to Arlington isn't going to change being around the Branch Covidian paranoiac crazies that infest the D.C. area and make it intolerable.
My current walk to and from the office at L'Enfant Plaza is about as good and weekday daily doable a route as I'm going to get. Recall that it involves some combination of 22nd, 21st, and 20th Streets and the National Mall and takes me past grocery stores, coffee shops, and (if I go all the way over to 19th Street down to the office, a Wawa). 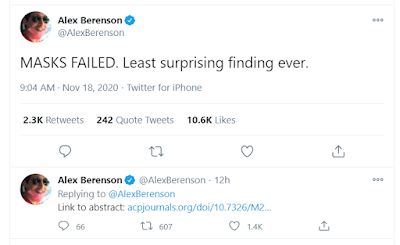 Alex Berenson tweet about that Danish mask study that finally was published in a peer reviewed journal.
Assuming the world begins to return to semi-normality (normalcy?) by the second half of 2021, it doesn't make any particular sense to rush into a new yet nearby location where things are about the same, only farther from the office and with amenities -- such as laundry facilities and grocery stores -- that are slightly more burdensome. 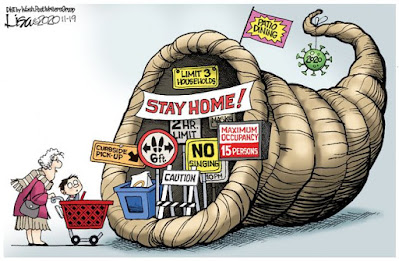 It is worth pointing out that the scummy Washington WOKE Post and its cultic followers, like all Illiberal Big Media crazies, can't stop saying "Before Covid" and "After Covid," as if the fucking world will NEVER return to normal -- which is, of course, precisely what they want so that they can get their "Great Reset" Marxist remake of civilization that can only end in catastrophe. 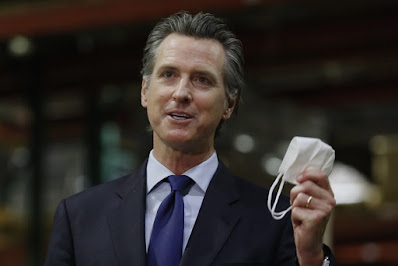 Gavin Newsom: A giant twat of a human being always in need of his feminine itch powder treatment.
Gretchen the Hateful Bitchmer Whitmer is the worst in terms of extralegal abuse of her office plus all-around psychologically abusive mother syndrome. Andrew Cuomo is the worst in terms of being a cheap, soulless mafioso thug. But it's Gavin Tutti Frutti Newsom who is, to me, the most fucking insufferably annoying. 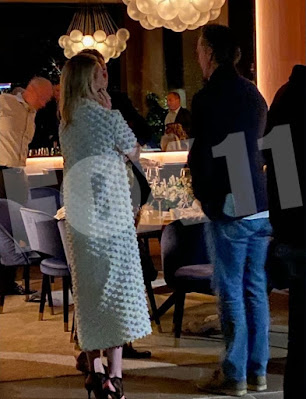 I'm not even talking about Newsom's "French Laundry" dinner hypocrisy. Hypocrisy by the leftwing ultra-rich and powerful on Covid matters is just a given.
Rather, I find Gavin Newsom as a human being deeply offensive because he is such a huge, arrogant, tone-deaf, clueless pussy who has no business being in any position of power.
But there he is with that stupid, smarmy grin on at his ugly face, sitting atop the failing Nation-State of California. Even the cadence of his name -- Gavin Newsom -- is fucking annoying and indicative of what a pussy he is. 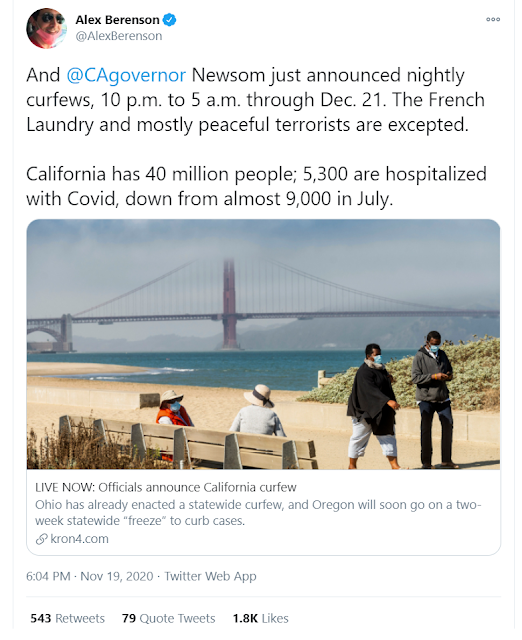 Yet the endlessly cycling and wholly counterproductive Democrat lockdowns are eagerly embraced by the historically illiterate and all-around-ignorant, CRT-crazed white and WOKE types. Included among these people are they who live in the wealthier D.C. suburban counties. I refer to the sort with the actively encouraged transgendered 10 year olds and who have all those IN THIS HOUSE WE BELIEVE IN lawn signs. They get all tingly all over when they hear "Before Covid" and "After Covid." Idiots. 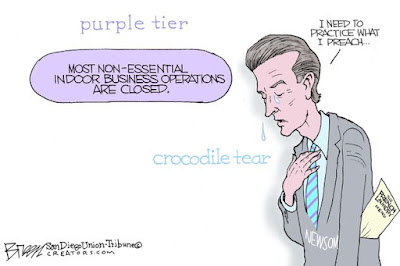 Finally, while I don't want to be in D.C. during a Pervy Joe Biden caretaker regime while Kamala plots and schemes in 25th Amendment Waiting, and the Branch Covidians are horrendous, I can just get a cheaper option of a bicycle to limit sidewalk time as much as possible.
Lastly, I should note that there is the remote possibility of less expensive efficiency in a building in Prince Street in Old Town Alexandria. If that were to come available -- and I should know tomorrow if the current application on it has gone through -- any any time, I can always move there. Old Town Alexandria is a place wherein I still want to live before I leave the D.C. area for good in 6 to 12 years. 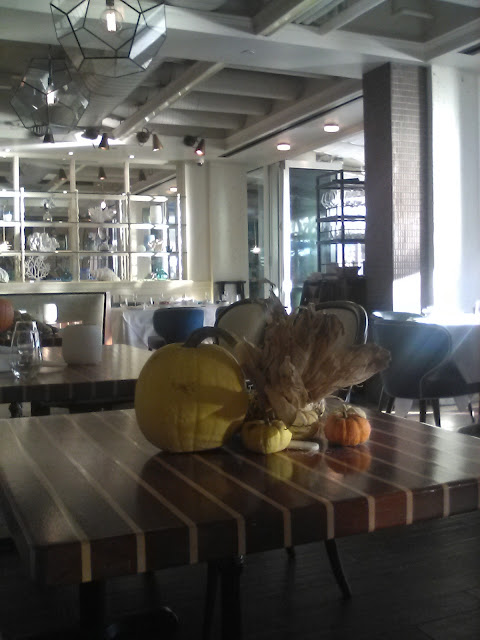 Oh, yes, I forgot to mention that I walked home yesterday in the surprisingly blustery, chilly evening via the Key Bridge. Air temperatures were around 40°F and there was a slowly relaxing gusty northwesterly wind. I went down to the Washington Harbour area in Georgetown and splurged at an expensive dinner at Fiola Mare, where I had never before eaten.
To the point of my entry above, the fact that I can spend that much money there also would be jeopardized if I moved quickly to a more expensive place. 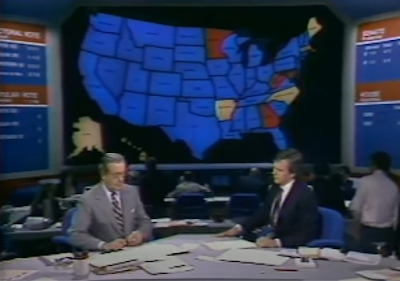 Re. the image above and the two below ... Last night, I started watching NBC News coverage of the 1980 and 1984 presidential election on YouTube. Above is the coverage from the 1980 election. That's John Chancellor and a young Tom Brokaw. Just watching bits of the six-hour long NBC coverage, it is astonishing how different, non-hysterical, non-opinionated, and straightforward was the news back then. It was a different world back then, at least with what we now call Big Media. 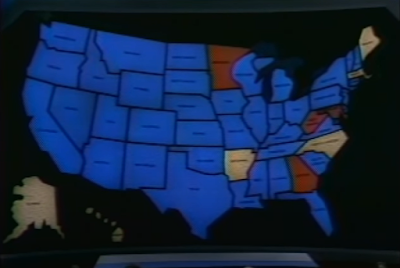 Of note, at least on NBC in 1980 and in 1984, the blue and red colors were reversed -- Republican Blue and Democrat Red. By 1984 on ABC, the colors was already were already what is used for today's Manichean political divide: Republican Red and Democrat Blue. That means the two networks were using different colors that election. Imagine that today. 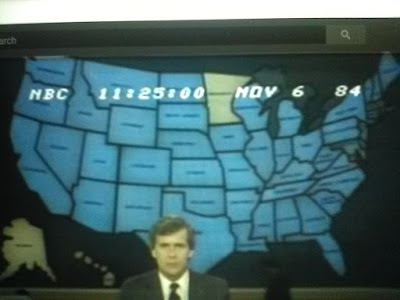 Above: The 1984 Reagan landslide. I well remember that and was happy. Interestingly, the quality of NBC's map had not changed at all in the intervening four years and two days. And Brokaw looked the same.
I remember the election of 1980 even though I was just three weeks shy of my 11th birthday. It was toward the end of my life in the house on Kirby Avenue in Long Branch, N.J., with my grandparents and dad. To clarify, though, there would still be another good seven years, including summers in Sea Bright at Tradewinds Beach Club. As an aside, Jimmy Carter is still alive at 96 years of age. And his wife of 74 years (!) Rosalynn (not Rosslyn) is 93.
OK, that's all for now. My intention is to post another entry tomorrow night, specifically, that Three's Company entry I've had in draft for two months now.
--Regulus
Posted by Regulus at 3:01 AM