A Windy, Blustery Fall Day Political Commentary in a Deeply Fallen Time: Round 2 (or 3) of Endless Covid-1984 Democrat Lockdowns Plus Hateful Cali Carpetbagging Across the Peach State -OR- A WOKE Lib Devil Went (Virtually) Down to Georgia 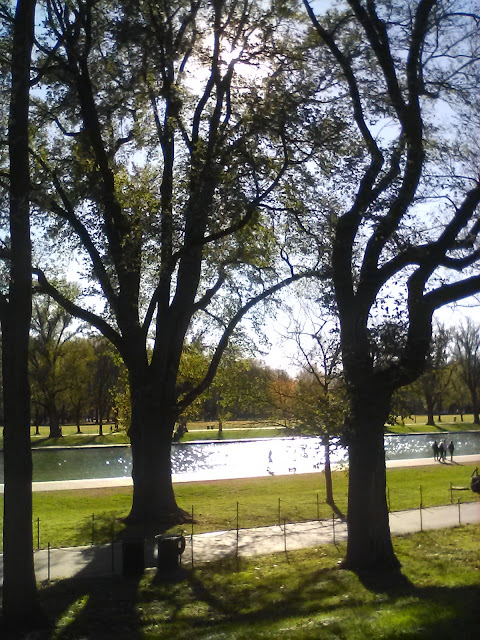 The Reflecting Pool sparkles in early afternoon autumn sun, Washington, D.C., 1:41 p.m. November 16, 2020
OK, I didn't actually complete and post this entry until nearly 11 p.m. on Tuesday night. It therefore contains additional pictures I took earlier today -- after I started the entry but before I walked to the office and took a few more pictures on this windy, blustery November day. They are not captioned but the file names contain place/time info. 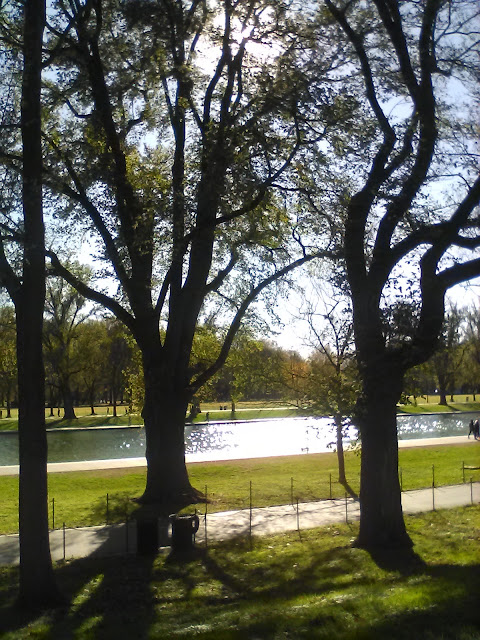 Above: This isn't the same picture as the one above it, although it was taken within a few seconds of it.
*******
A very fall-like fall early afternoon.
It is a partly cloudy / partly sunny, breezy, blustery November day with air temperature at the noon around about 60F and a westerly wind surging in gusts to nearly 40 mph as a cold front blasts through mostly dry with a reinforcing shot of chilly autumn air. 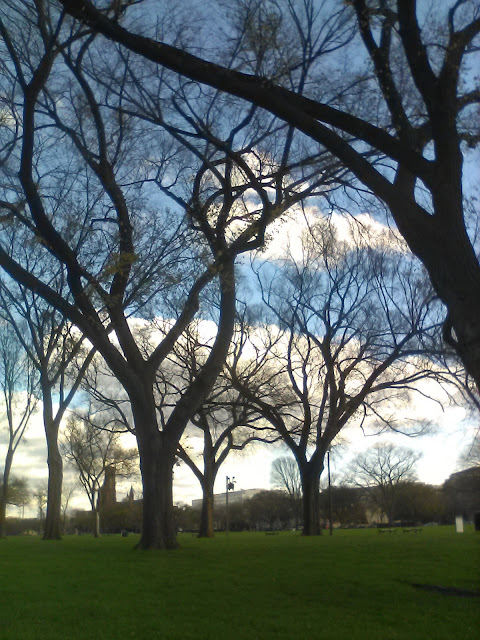 I'm in the process of composing a non-political-themed, topical entry, but I ran out of time last night. I'll try to finish it tonight. Remember: Keeping up a regular blogging schedule is a difficult and time-consuming task for me, i.e., it's a royal pain in my ass.
Having said that, I would like, of course, to write many entries on the thoroughly horrifying and disgusting time in which we are living. 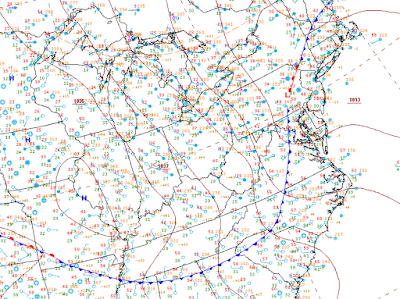 On that latter point, it is due to the combination of an almost entirely meaningless surge in Chinese Flu (SARS-CoV-2, a.k.a., "Covid-19/84") virus infections -- virtually all harmless except for the morbidly obese or otherwise compromised and/or ancient -- and a fucking Pervy Joe / Kamala Harpy Harris-in-25th-Amendment waiting co-presidency. All brought to you by Big Media and Big Tech amid a raging Cultural Marxist revolultion by a degenerate Illiberal Left, all the Pelosi Democrat governors are going bat shit crazy with new lockdowns in their respective states.
Yes, elections have consequences, even manifold stolen ones. 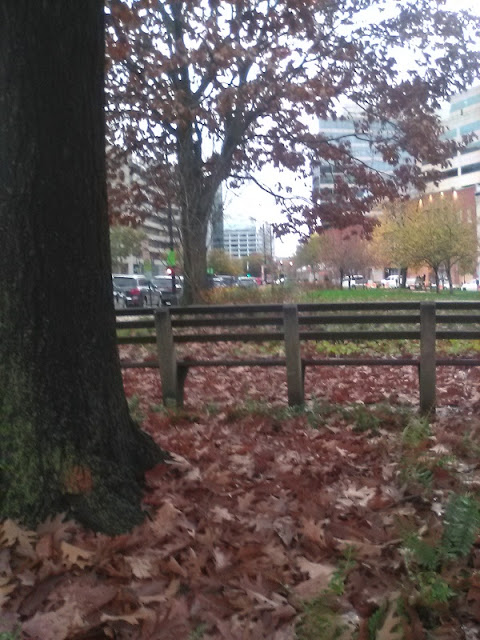 I refer to the ongoing totalitarian wannabe actors and their actions of Gretchen the Hateful Pony-Faced Witchmer Whitmer in Michigan; Gavin Tutti Frutti Newsom and his Feminine Itch Powder that he keeps at all his mansions; creepy pervy Jay Inslee; and, of course, the UR-Daddy of it all, Andrew Stone-Faced Mafioso Thug Cuomo (D - Nursing Homes) among others. 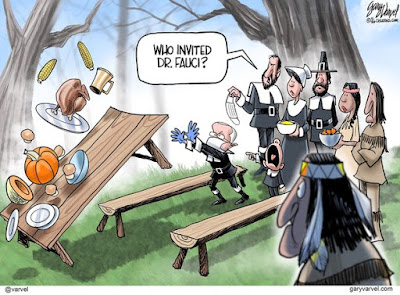 What each of them are trying to out do the other for ever-more-bizarre lockdowns that are reaching farther and farther into people's private homes. Putting aside the personal searing hypocrisy, each of them intrinsically views their governing role as that of a parent -- albeit mentally deranged parents and, in the case of Bitchmer, a neurotic and badly emotionally abusive mother -- in which society must be "punished" for not obeying them. 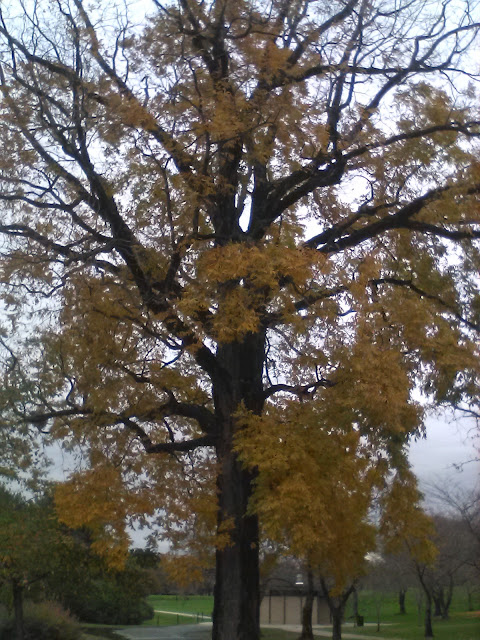 It is worth noting that at least three county sheriffs have told Cuomo to pound sand and that as the local jurisdictional law enforcement officer (LEO), they aren't going to enforce his flamboyantly anti-Constitutional edicts. These nightmare Democrat totalitarian wanabees are seeking to "cancel" Thanksgiving and Christmas -- all on the pretext of having some 85-year with 15 co-morbidities live another six months -- because at their core, they WANT people locked down and dying of disease, loneliness, addiction, and agony. 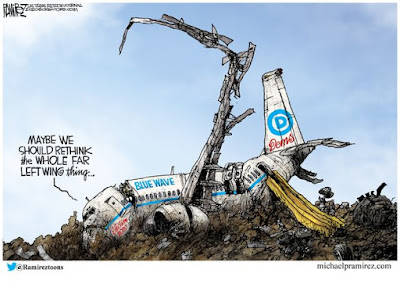 Of course, true resistance this kind of totalitarianims causes Chris the Metrosexual Pussy Hayes to soil his silk panties and gets Rachel "Mad Cow" Lesbian Maddow worked up into such a frenzy that she even forgets for a bit her obsession with FREE, EVEN MANDATORY ABORTIONS AND GENDER REASSIGNMENT SURGERIES FOR EVERYONE. 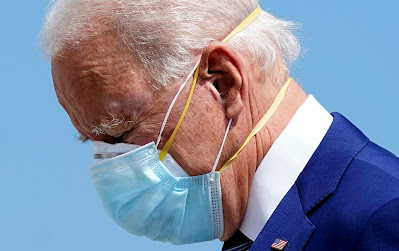 As for Geriatric Joe -- not president for another two months but already soiling his Depend undergarments while drooling into his face diaper and on track to be among the shortest and weakest serving president ever -- he's giving weird orders while being worshipfully propped up by the obese dough boy Brian Stelter media types. Specifically, he's demanding people obey his Thanksgiving orders or "risk" being locked down forever. 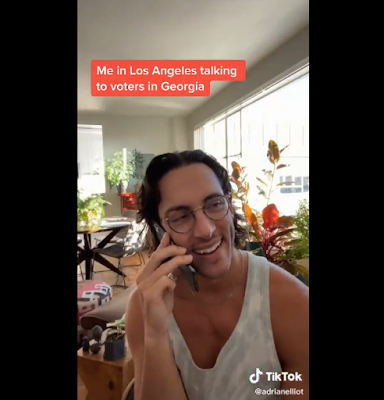 We still have those two super-critical Georgia Senate races that will determine the fate of the Senate for the next two years, but it is worth noting that Dems seem intent on fucking that up with ugly shit like this courtesy "virtual" California carpetbagging from a certain hateful and stupid sort. 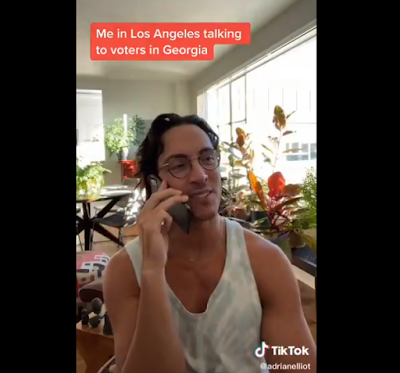 I refer to this massively self-important but fundamental clueless clown filled with hate, self-righteously preening, and grotesquely self-unawareness liberal jackass from Los Angeles. He is the proverbial great director, creative writer, and photographer whose self-importance is inversely proportional to his lack of anything meaningful to offer the world and, based upon his political judgment, counter-productively stupid.
By this, I refer to the fact that this guy made a boastful short video (on Tik Tok, where else??) of himself severely and possibly illegally misrepresenting himself in cold calls to random Georgia voters. Idiot. The video was then wamplified by some insufferable journo-advocate Washington Postie. 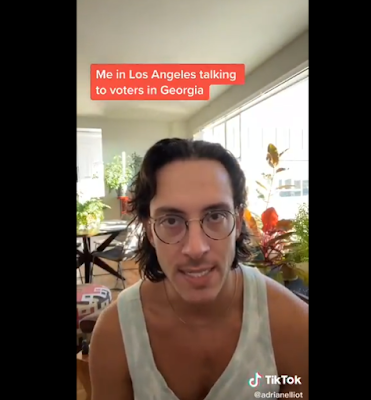 Watching the video with his supposedly powerful "WHATEVER IT FUCKING TAKES!" ending, you realize this guy -- whose name I opted not to write out in this entry -- actually believes that random voters in Georgia are so stupid that his deeply affected, queer-inflected Southern accent will dupe them. This is the worst sort of hateful, not to mention counter-productive mockery. And with a screwed up moral mindset and ethical behavior, he sincerely believes that by doing a phone drag impression that wildly misrepresents who and what he is, he's doing God's work (or whatever he believes in -- probably just himself and the usual farrago of WOKE shit). 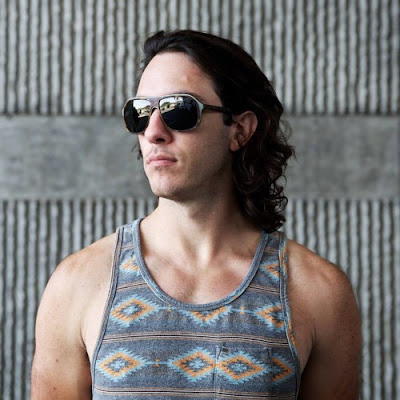 It might be the case that this guy in question doesn't identity as gay. (You never know who identifies as what nowadays). What I do know is that as a middle-aged gay man who has lived in and around D.C. for 28 years, I have more than a passing familiarity with this sort of person. Intrinsically hatefully judgmental and ultra-selfish, this sort is neither insightful nor wise. Thanks a clueless mediocrity, he is nevertheless convinced of his great qualities spanning compassion, wisdom, and talent. In the end, and no matter how "pretty" or physically desirable he appears, he is a self-absorbed, fundamentally unserious queen.
All that aside, I am glad this TikTok video -- which some stupid Washington Post journo-advocate touted - got picked up by both Georgia Senators, who amplified it via twitter. Below is a screenshot compendium of their tweets showing the embedded video. 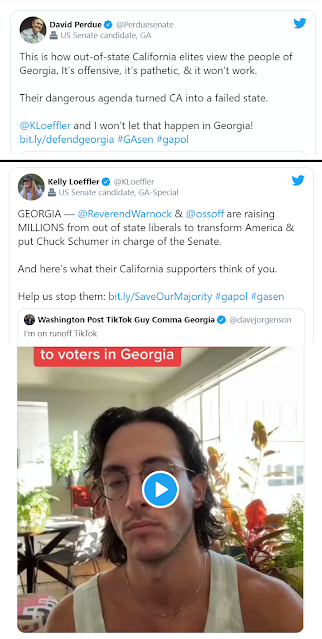 But back to the Democrat governor totalitarian lockdown strategy ... Given the virtual total lack of state and federal judicial pushback, to say nothing of neutered and useless legislatures (except for a tepid attempt or two), at present there is functionally no Constitutional freedoms in the United States.
Rather, everything is a fucking open-ended public health emergency. This goes beyond just the Wuhan Laboratory Cheap Knock-Off Hybrid Pangolin / Bat Flu, er, Covid, but everything to include, of course, "global warming" and "racism," all of which is part of the massive Marxist-infused Oligarchical "Great Reset" of civilization. 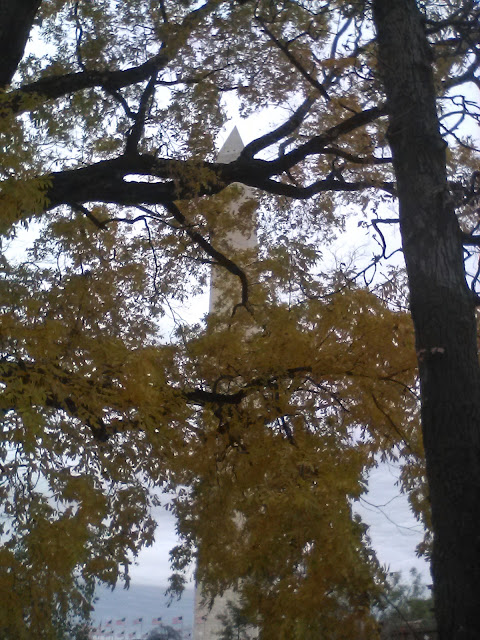 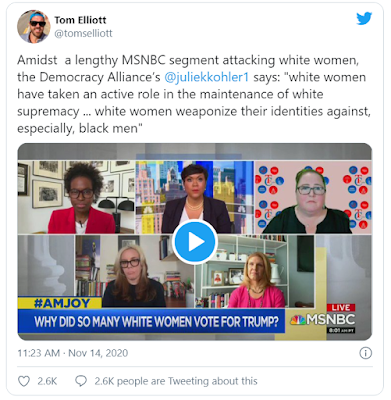 Look at that them: Each one more morally deranged, CRT virulently racist, unlovably revolting, and all-around-cartoonish dystopian in their worldview. As for that spherical-faced chinless woman, while seriously bovine looking, she clearly doesn't appear to be grass fed. 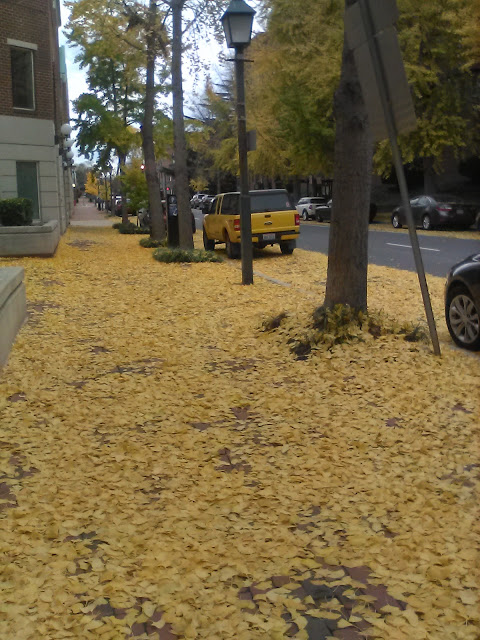 Yes, it's a fucking grotesque and hideous time with no end in sight brought to you by corporate oligarchs and totalitarian twat Democrats everywhere.
Guess it's time for those wealthy ass-wipes in Montgomery County, Md., to put up more of those "IN THIS HOUSE, WE BELIEVE IN" yard signs with their sundry quasi-Orwellian ministerial slogans of Covid-1984. 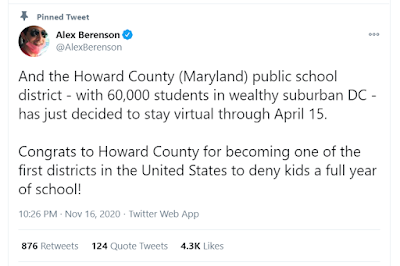 Speaking of suburban Maryland, the public education racket that runs Howard County, Md., has achieved the public teachers union lifelong goal of skipping AN ENTIRE YEAR of in-person teaching for the current malevolent garbage, and that's considered a good thing.
Yes, it's malevolent insanity and only getting worse. And that's why I have done my best to cut off all contact with all the individuals I was once friends with in suburban Maryland save for one major and one minor exception. 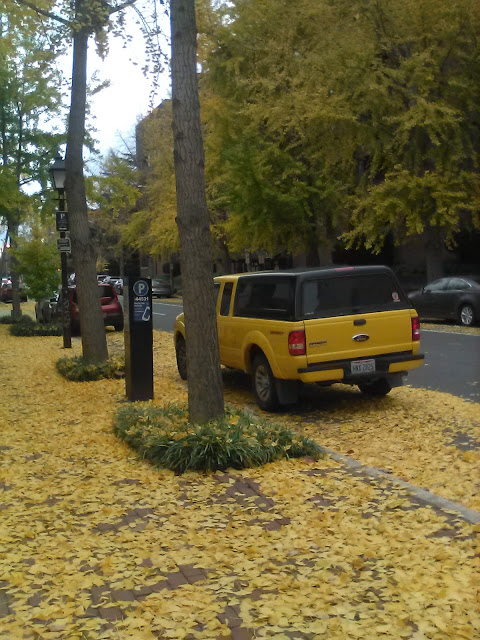 One political matter to note: Barack Obama, a.k.a., Barry O, is back bigtime playing kingmaker behind the Biden basement toilet throne, and he is becoming a real insufferable and dickhead with an ever-growing racialist obsession.
On a personal note, all during his eight-year presidency, it never dawned on me what a fucking self-righteous, authoritarian prick he was. And his wife is an even worse bullying, annoying shrew. 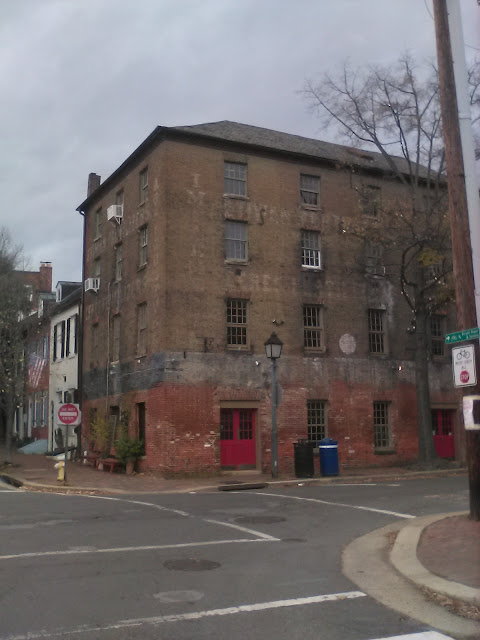 And for any of you who thought you were getting a post-Trump return-to-normalcy, you'll get "normalcy" if by that you mean the Democrat corporate oligarch donor class on one side and ever-more-nihilistic-and-solipsistic identity politics on the other. In other words, pure hell. Remember that. 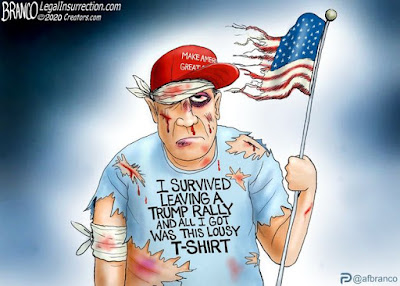 The only good news to report is that some of the BLM ghetto thugs -- that appendage of the Antifa Pelosi-crat vermin -- who violently attacked and/or terrorized the left-over stragglers and nighttime diners following the Saturday MAGA / Trump rally down by the White House were nabbed. 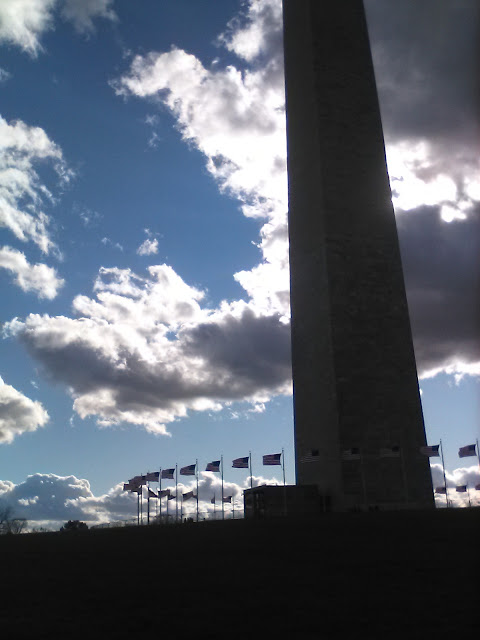 Mayor Muriel Big Breasted McCheese (D - WOKE Queefs) probably is unhappy. Remember: She arranged that situation including with the police patrols so that violence against Trump supporters -- including the elderly and young children -- intentionally happen while CNN and PMSNBC were rah-rahing it on because they agree with the ends.
OK, that's all for now. 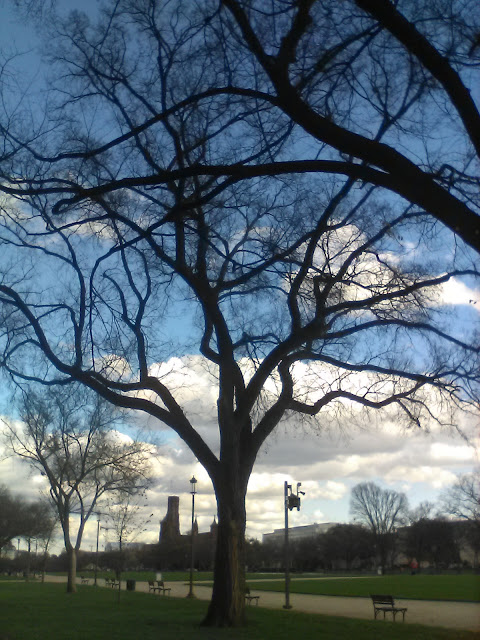 Tomorrow, I go over to Arlington to see if that potential new apartment is a place that I want, in fact to move. Finally leaving fucking D.C. in this awful time is still a high priority, but I don't want to go through all that aggravation just to substitute it for a place that is unpleasant or more difficult. 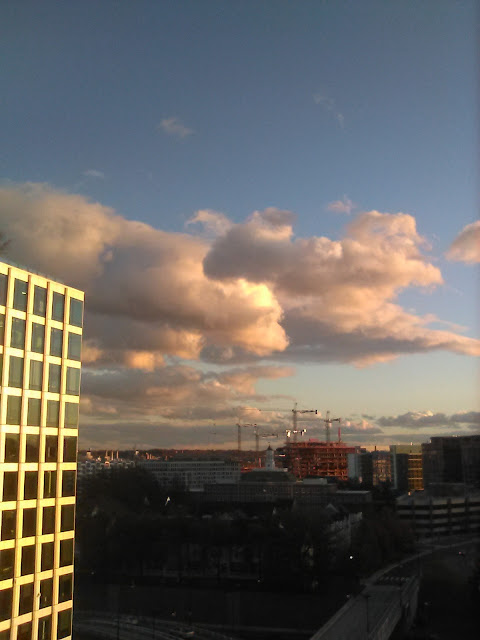 OK, that's all for now. As for that other entry I planned, I was going to have it done tonight, but it is going to have to wait until tomorrow. Hint: It involves the TV show Three's Company.
--Regulus
Posted by Regulus at 10:02 PM