Update on Hurricane Rather Than Catherine Zeta

This entry is about Zeta ... 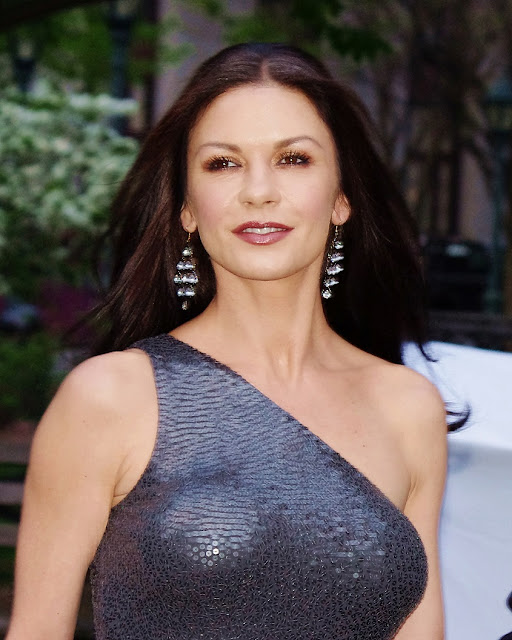 … No, not this Zeta.
For this entry, I'd like to note an impending late-season tropical cyclone named "Zeta" that is forecasted to strike the Louisiana coastline on the Mississippi Delta tomorrow evening as high-end category 1 or low-end category 2 hurricane. 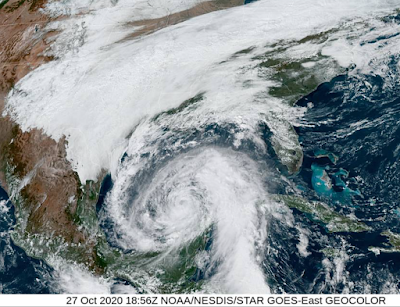 Zeta is so named because it is now the 27th named tropical (or subtropical) cyclone of the Atlantic basin hurricane, which puts it now at the 6th letter of the Greek alphabet, i.e., Zeta.
More on Zeta and the naming system toward the bottom of this entry.

What is technically as I write this entry Tropical Storm Zeta -- but likely to regain hurricane status by morning -- formed as a depression near the Cayman Islands and intensified into a tropical storm Sunday morning.

The storm intensified into a hurricane by early evening Monday. It drifted into the Yucatan, making landfall around 11 p.m. on Monday (Oct 26th) near Ciudad Chemuyil with top sustained winds of 80 mph and central pressure of 977 mb (28.85 inches).
Weakening back to tropical storm status, Zeta exited the Yucatan near Progreso on Tuesday morning and has been moving over the Gulf of Mexico, slowly reorganzing following its interaction with land. 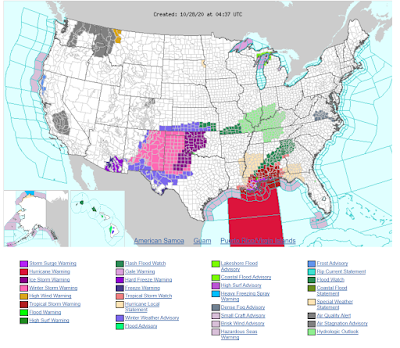 As of the 10 p.m. CDT update tonight, Zeta is showing signs of intensification with both favorable atmospheric conditions (low shear) and warm oceanic content. The current forecast has it strengthening to 85-mph winds at landfall, but it wouldn't surprise me it were to intensify (significantly) more by landfall. 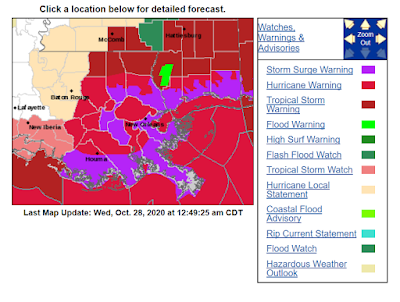 Landfall itself looks to be right on the highly vulnerable Mississippi Delta between the Birdfoot Delta / Head of Passes and New Orleans.
One of these days, New Orleans is going to be taken out ...for good. No recovery possible. Hopefully, this isn't the storm to do it. We have enough of a nightmare year going on already.

Anyway, here is the forecast discussion from 10 p.m. CDT on what is anticipated with the storm:
The storm is expected to turn northward and move along the western side of a mid-level anticyclone centered east of Florida through Wednesday morning. A deep cold low (responsible for the southern Plains ice storm) approaching from the west will cause Zeta to sharply accelerate north-northeastward and move inland along the southeastern Louisiana coast Wednesday afternoon.
The cyclone should continue to accelerate ahead of the trough and move over the southeastern and eastern U.S. through Thursday. Similar to the last forecast, the official track forecast was moved slightly westward during the first 24 hours, not too dissimilar from a consensus of the latest GFS, UKMET and ECMWF forecasts. 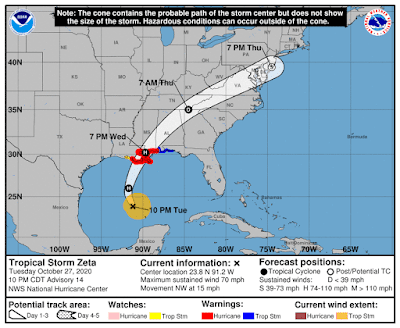 The forecasted track will take the remnant center -- absorbed into a broad trough -- almost over the D.C. area around 6 p.m. Thursday, bringing potentially copius rainfall. Forecast amounts are in the 2 to 4 inch range here.

As the above discussion indicates, there is a freezing rain / ice storm striking tonight the northern Texas including the panhandle and western and central Oklahoma.
This will be the third tropical cyclone to hit the Louisiana coastline this season -- Laura (the strongest, striking near Cameron, La.), Delta (just a bit farther east than Laura near Creole, La.), and now Zeta.

Now, a few words on tropical (and subtropical) naming ...
Yes, there are 26 letters in our Latinized English alphabet, but the World Meteorological Organization (WMO)-approved National Hurricane Center (NHC) list for the Atlantic basin uses just 21 letters, skipping Q, U, X, Y, and Z, and then utilizes the Greek alphabet.
Non-retired names rotate on a seven-year cycle in the Atlantic and eastern North Pacific. Here are the lists for 2020 - 2025 or six years, inclusive. (The central North Pacific has its own set of names and follows a different rotation cycle. Ditto the Western Pacific.) 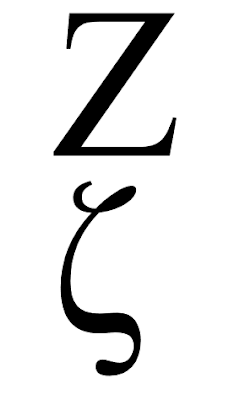 It just so happens that the 6th letter of the Greek alphabet is "Zeta" -- so it isn't technically a "Z" name but it works out that way.
It would have been better if NHC used 20 letters, since that would have made "Zeta" the 26th named storm, corresponding to the fact that "Z" is the 26th (and final) letter of the Latinized alphabet.
The 2005 season was the only other time the Atlantic basin season reached into the Greek alphabet.
In that year, there were also 27 named storms -- ending in, coincidentally to this entry, Tropical Storm Zeta. 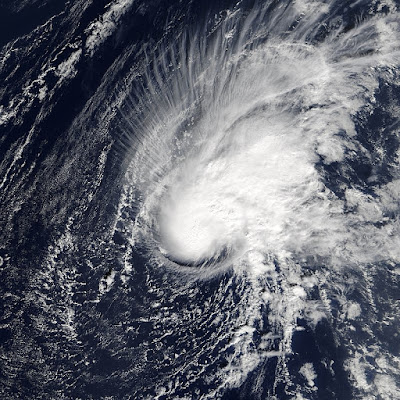 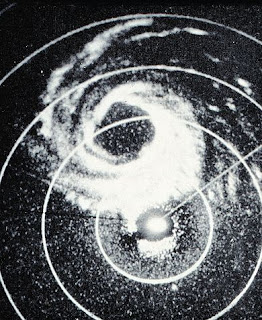 In this way, Tropical Storm Zeta in 2005 was the second latest tropical cyclone on record after Hurricane Alice in 1954, which formed two days later in the season on Dec 30, 1954 and dissipated on Jan 6, 1955. Hurricane Alice was thus the only other Atlantic basin tropical cyclone to span two calendar years.
Above: A radar image of Hurricane Alice on Jan 1, 1955 north of the Virgin Islands.
Lastly, I don't think any Greek letter named storm yet has been retired.
Oh, and I should note that with the Greek letters Z (Zeta), X (Xi), and U (Upsilon), you can, given a sufficiently active Atlantic hurricane season, fill three of the five English alphabet letters not used. Only Q and Y never get used in either alphabet. 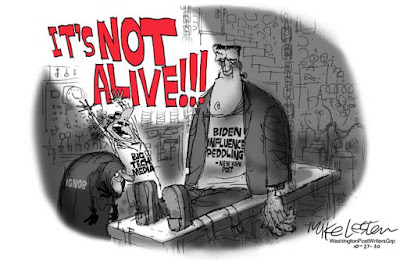 OK, that's all for now. Depending on how Zeta evolves I might update this entry with additional information or post a new entry outright. As for planned entries on other unpleasant matters -- the catastrophic condition of America and the impending election disaster -- those will have to wait. 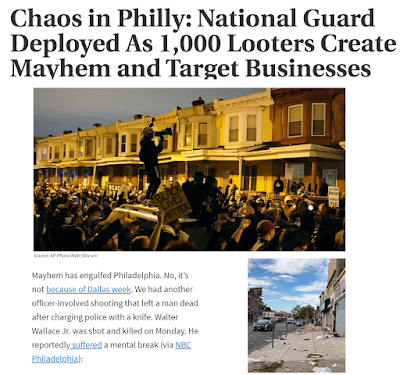 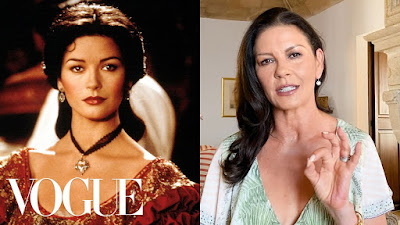