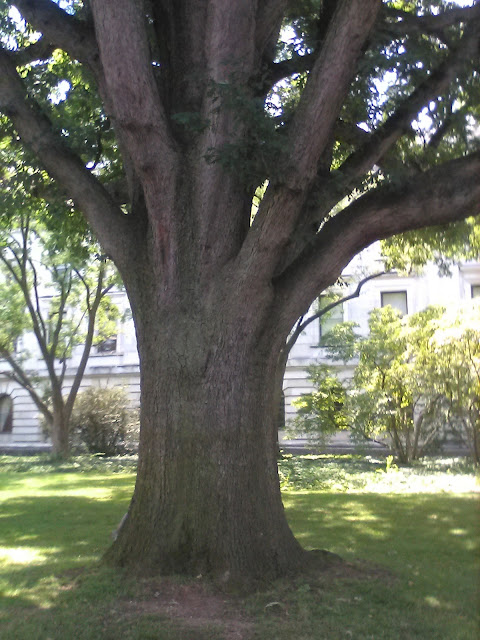 Large oak tree on the grounds of USDA headquarters just off the National Mall, Washington, D.C., 12:26 p.m.,
July 27, 2020
The images in this entry are part of a set of 60 pictures that remain in my laptop's "Camera Roll" folder that I've been intending to evaluate and either post or not post. In case you're wondering, I'm posting these random older pics because this is a good a time as any to go through at least some of them. 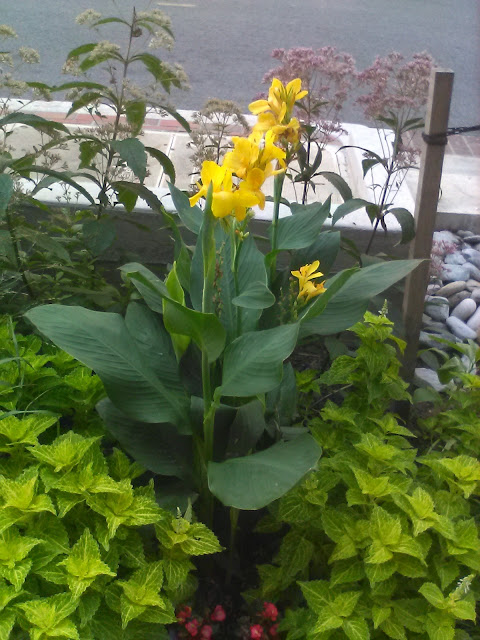 They stretch back to late July and were almost all taken here in Washington, D.C., on sundry outdoor walks. These include pictures on consecutive days in late July and others in the first week of August on walks between my apartment and office transiting the city's "Monumental Core." Except for the lead one, I am not captioning them, but the file names contain place and time information. 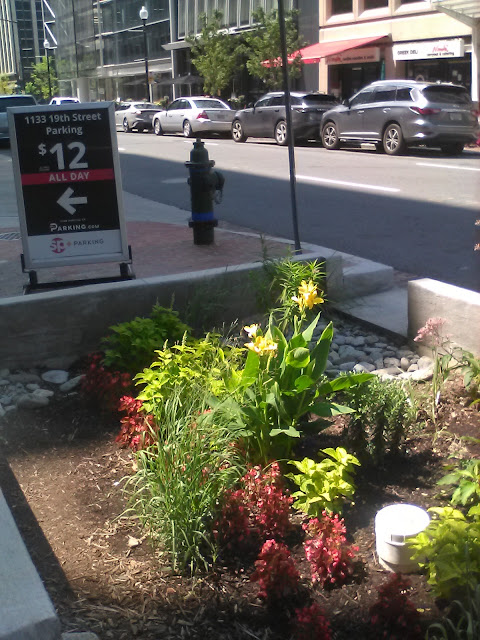 This entry is coming ahead of an even lengthier one I am planning, but it is necessary given the topic of that entry and related news. The giant news in the current toxic, malevolent U.S. political climate is that President Donald Trump and his wife, First Lady Melania Trump, both tested positive for Covid-19, i.e., the Wuhan Coronavirus (a term that sends the WOKE Illiberal Left into hysterics, so let's use it early and often). 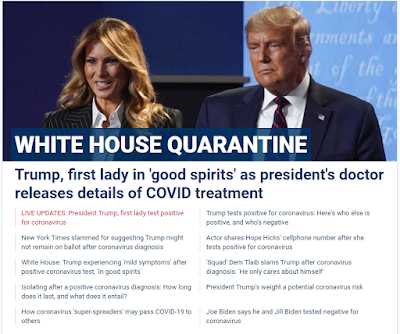 The two are said to be in good condition and quarantining at the White House here in Washington, D.C., Seat of the Late-Stage Empire.
So, this entry contains tiers / pivots off of the invaluable Alex Berenson on this news combined with the never-ending Covid hysterics situation and larger, deeply toxic political environment in the U.S. 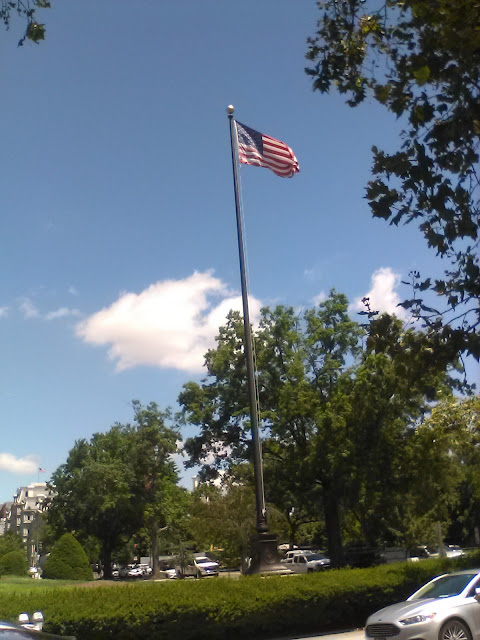 It goes without saying that the grotesque, violent Illiberal Left are in syphilitic banshee-like fashion filled with atavistic glee and hoping and praying to whatever garbage they believe in for Trump's death ahead of the election. Worse, though, than a bunch of nihilistic Twitter vermin on semi-permanent lockdown is the degenerate Mainstream Media. 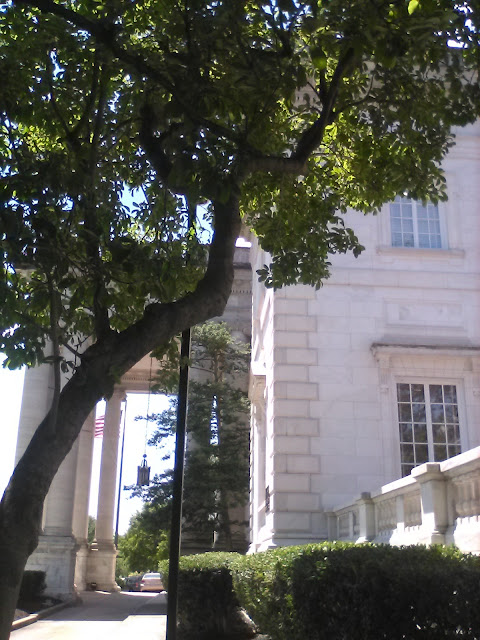 The tweet image below by Alex Berenson -- a man who is my multiple-times-a-day must-read and beacon of sanity during this time of endless Covid hysterics -- sums up nicely the MSM reaction, specifically, from his former New York Times colleague and op-ed columnist Frank Bruni: 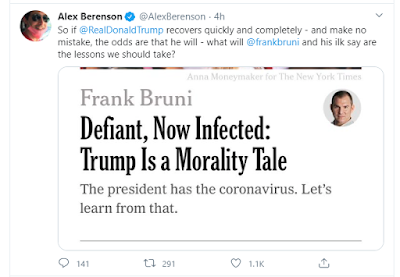 It's always amazing to me the endless stream of self-righteous, bullying, hectoring, yet wholly self-unaware condescension that is sprayed out in firehose fashion by the fucking Illiberal Left mainstream media journos and pundits. To be clear, these are two sets of media personalities now wholly indistinguishable from each other in this current obscene era of socially destructive identity politics-based Cultural Revolution. 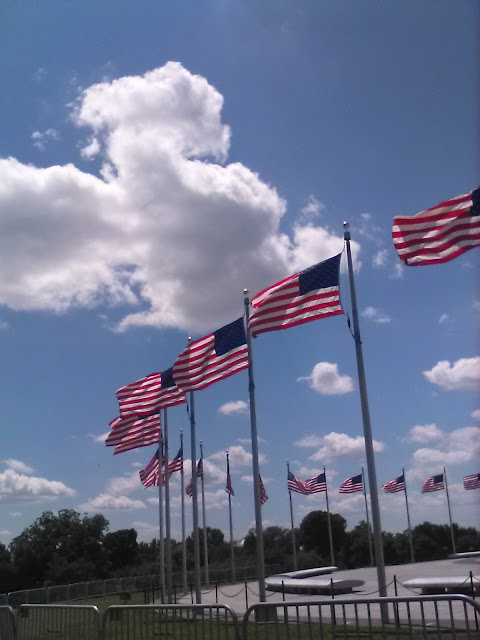 In the case of Frank Bruni, it's hard to overstate what a viciously hateful, insipidly vapid, fundamentally ignorant asshole is this gay bar happy hour reject. In his decades at the New York Times, he has yet to post a single meaningful thought. This is why this eating disordered homo has a column-at-the-ready to hector and bully the world over in his NYT WOKEISM fashion about "lessons to be learned" from Trump's diagnosis. 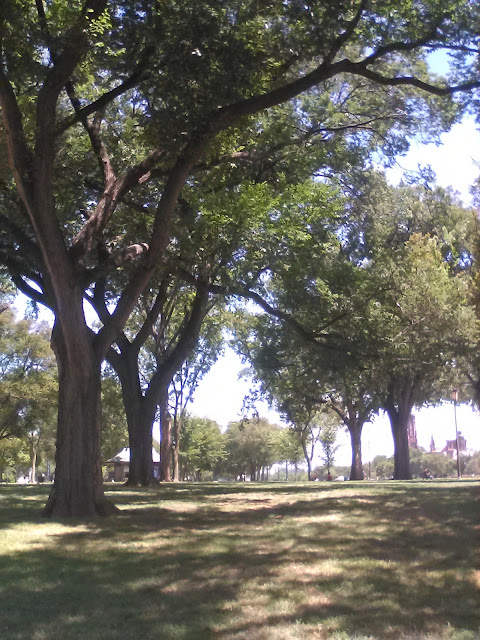 As for what impact this diagnosis will have on the impending clusterfuck of an election, I don't know. Trump already appears to have been on a sudden downswing in the past week or two. That is, his fortunes appear to have been waning a bit following 2-1/2 months of a seemingly imperceptible but, ultimately, very real rise. 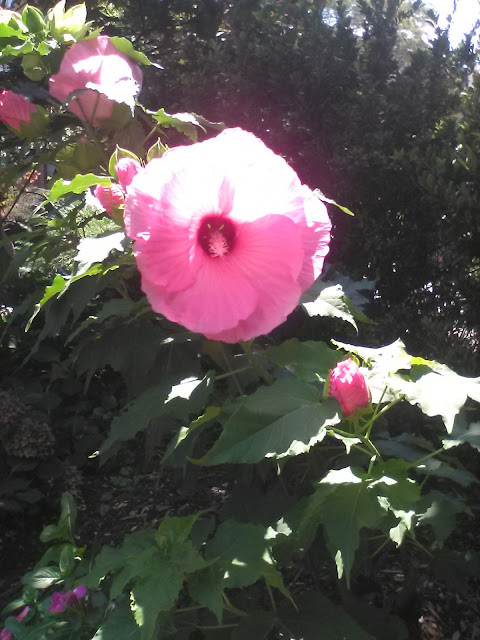 Trump's fortunes APPEAR to have started to drop even before the Chris Wallace-facilitated shit-show of a "debate" with Creepy Sleepy Joe Biden, that dementia-addled stalking horse for his Co-President-In-Waiting Kamala Lady Macbeth Harris, Nancy Pelosi confiscatory "economics," and a grab-bag of AOC-minded Cultural Marxist Antifa and BLM violence and depravity. (I say "APPEAR" because polls right now seem so intentionally PSYOP suspect.) 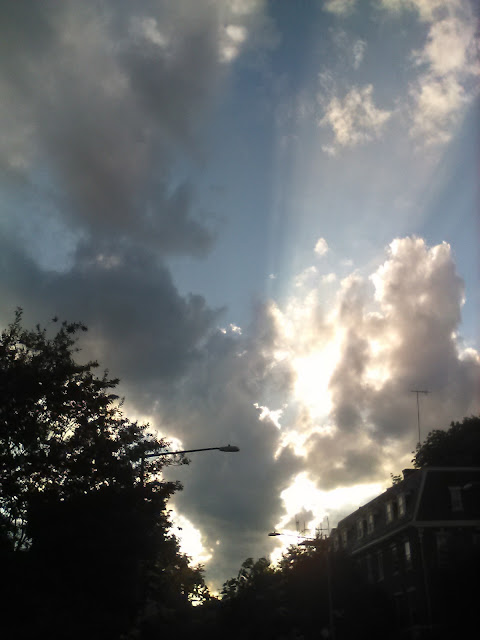 Not surprisingly, the Usual Lunatic Suspects of the leftwing "blue check" Media Mafia see the diagnosis as a conspiracy to HELP Trump -- thus tacitly admitting, as Alex Berenson observed, that Trump is likely to get through this Covid-19 just fine. Then there is Tom Arnold, a comically-deranged, has-been media personality who, upon hearing the news, tweeted Hope Hicks' cellphone number so that she could be doxxed by his Twitter vermin followers.

By the way, speaking of Alex Berenson, he had the following tweets that involve ultra-WOKE "blue check" journalist Anand Giridharadas -- who speculated that the Trump Covid diagnosis wasn't "true" but, by inference, a conspiracy to help the President: 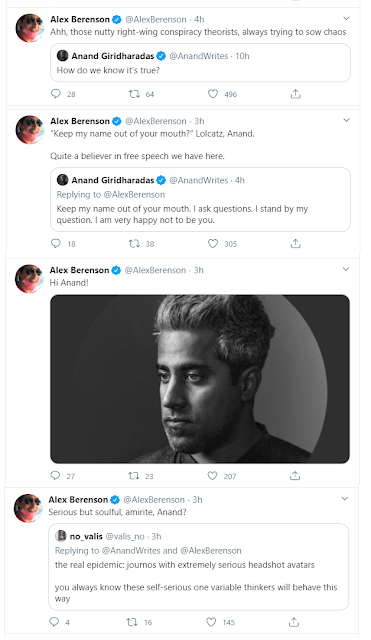 This is one of the reasons I love Alex Berenson during this time of Covid hysterics and Cultural Revolution: He mockingly satirically calls bullshit on these narcissistic snowflake millennial advocacy-journo types. I refer to the WOKE Social Justice Warrior sort who endlessly dish out cancel culture, excuses for rioting and looting by violent Antifa and BLM street-level shock troops, and generalized hateful garbage. However, because their illiberal education has cosseted them from any contrary opinion that might "trigger" them, they are the sort who instantly freakout and cry when they are mocked with satire. 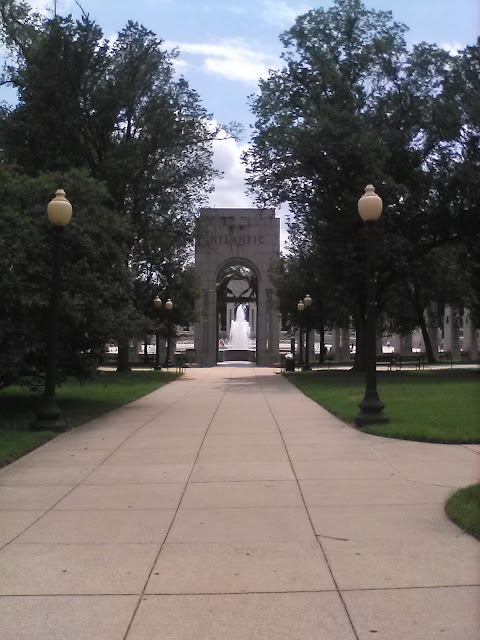 Anyway, the point of this entry was to create a a sort of "prequel" to my planned entry, namely, one in which I just got the news of Trump's diagnosis out of the way.
Oh, yeah, about that diagnosis, and again per Alex Berenson, it would be good to know how many cycles were done on Trump's PCR test. The 40-cycle (i.e., ONE TRILLION-time-enhanced) PCR test is functionally garbage by an order of magnitude. 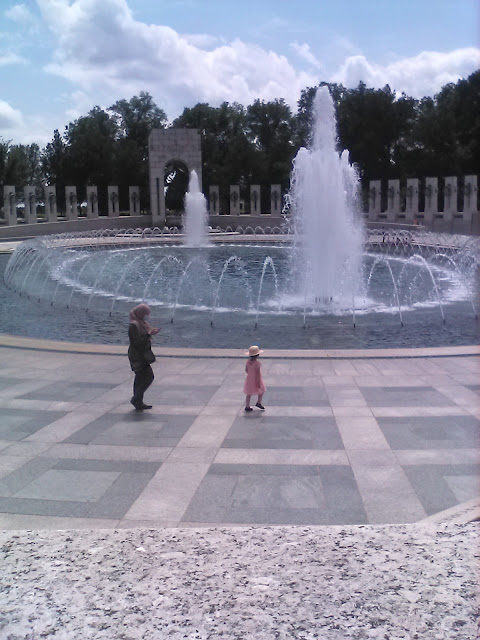 To me, the biggest horror in this situation is the steadily encroaching leftwing totalitarianism of those clown-like asshole Democrat pols at the local and state level with their endless Covid shutdowns and all the destruction these are causing. This is happening with virtually no pushback despite the flamboyantly and grotesquely unconstitutional and/or extraconstitutional nature of the power grabs. 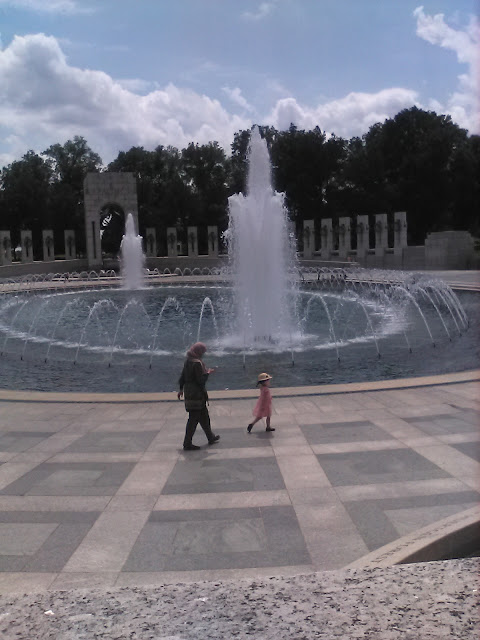 A Kafkaesque case in point is California. Now nearing day 200 of the "two week shutdown just to flatten the curve and keep hospitals from being overrun," California's painfully stupid airhead Gov. Gavin "Pussy" Newsom AGAIN is shifting the goalposts to include WOKE-minded, i.e., horseshit meaningless, "equity" metrics. This is part of his latest series of (as some in the UK are calling it there) "Covid-1984"-style forever-unaccountable emergency Executive Orders. And there is no fucking pushback on this. It's unreal and it's deranged. 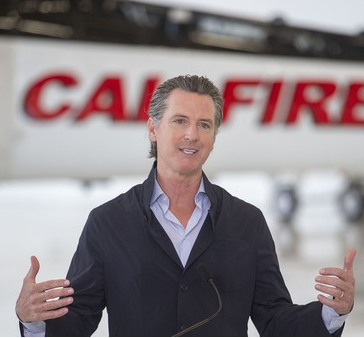 I can't wait until California is partitioned into at least two and maybe three states. For the survival of the various, disparate people who live in what is now the State of California with its unchecked, mob-run totalitarian lunacy, it needs to vanish in its present form. And, yes, this WILL happen. We are (maybe well) within 10 years of a serious political reorganization of the United States, peaceful or otherwise. 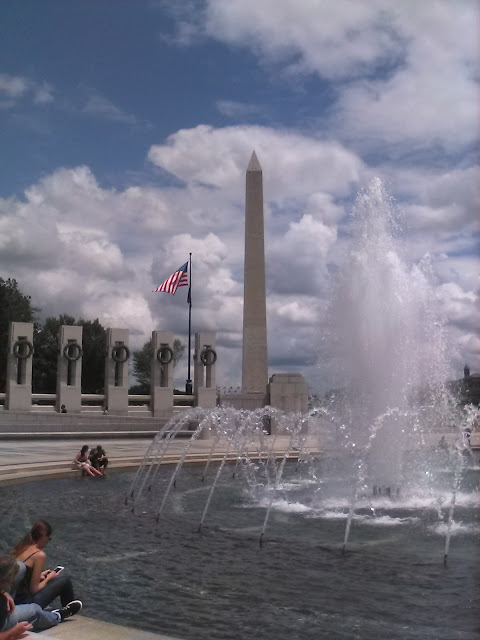 OK, that's really all I had to say for this entry. My plan is to post a longer entry tonight that is interspersed with pictures from my recent Southern California trip. However, that entry has metastasized in the usual fashion of my entries, so it might not be completed until over the weekend. 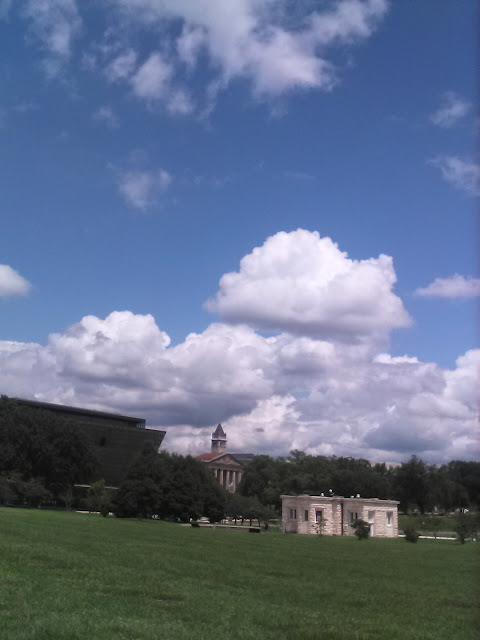 For tonight, I need to get dinner somewhere before I walk home. For tomorrow and Sunday, I have outdoor plans in Arlington and Alexandria. Anything to get the fuck out of D.C. To that end, I've nixed going to F&D's Sunday night dinner party soiree for the next few months -- certainly until after the election. 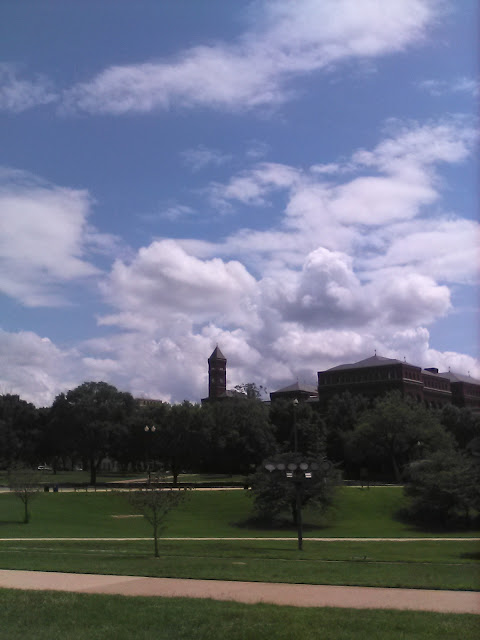 If you must know why, I just can't handle that neighborhood anymore (where I used to live for 15 rotten years) and its WOKE, MASKED, female/transgendered-run Millennial urban horseshit. What's more, I'm tired of having my entire Sunday nixed because it has to revolve around those two to three hours.
OK, signing off for now. Peace and love. Yeah, right.
--Regulus
Posted by Regulus at 7:20 PM