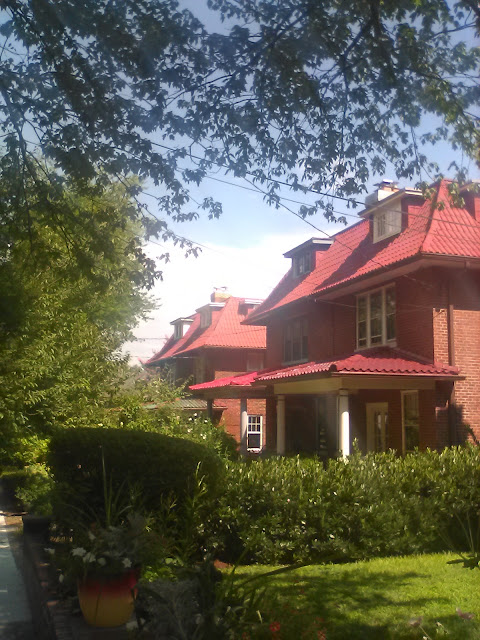 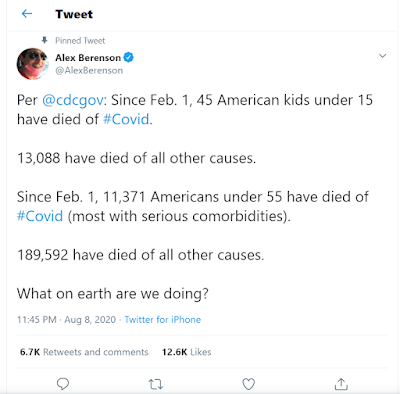 I'm loathe to link to any CNN filth and garbage, but here my MSN feed version of the SHRIEKING terror-mongering entertainment piece -- please don't dignify it with the name "news" … 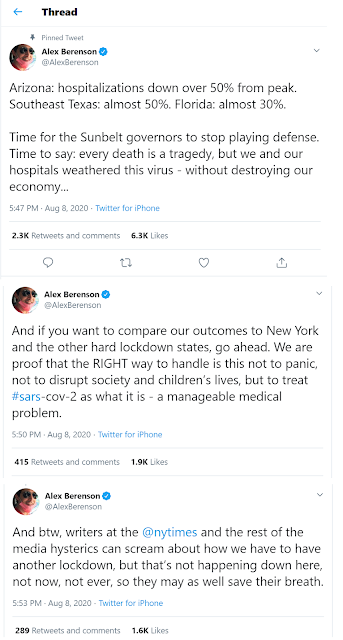 I mention this because the previous narrative of MASSIVE SOUTHERN STATE SURGE AND DIEOFF!!!! has pretty much slipped and fell on its silly ass as positive cases and hospitalization numbers drop sharply in predictable fashion. What's more, this fall is happening after a surge that NEVER overwhelmed hospital systems (not this or that random hospital in some desperately poor county on the US-Mexico border), and, non-stop media braying aside, DESPITE no destructive society-wide lockdowns undertaken by most of those states' governors. 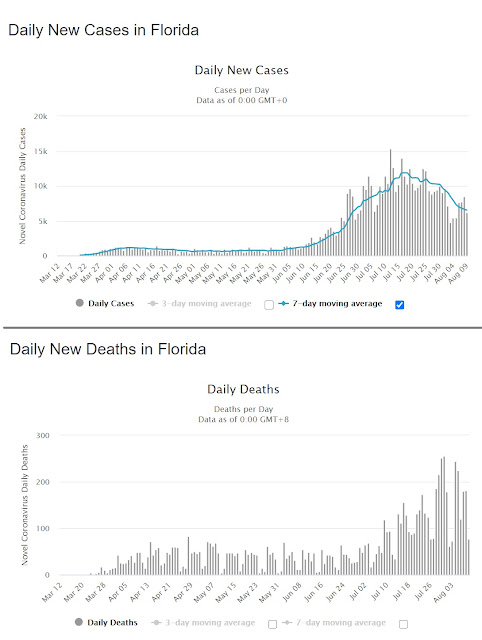 Indeed, it's not inconceivable that, say, Florida has a general population infection rate somewhere between 20% and 30% -- and, as in the case of places as wildly varied in their approach to Covid-19, namely, New York City and Sweden, that is enough to cause herd immunity to start to kick in (rather than at 60 to 70%). 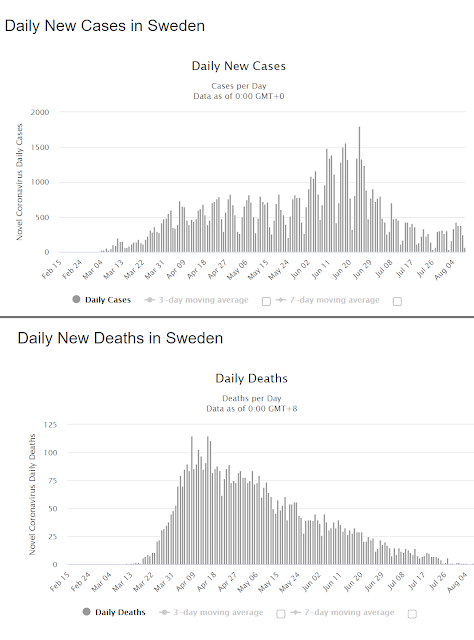 The WHORE MEDIA -- in their existential death struggle against Donald Trump and thus eager to employ ANYTHING up to and including the very destruction of society itself -- cannot abide this fact. And now that it is looking like more and more schools are, in fact, going to be returning to in-person classes in the fall, a YOWLING SHRIEK-FEST of a new degenerate narrative is desperately needed. 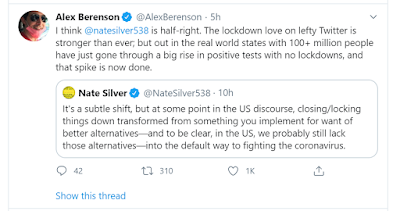 It's hard to overstate what a force for malevolence, fear, and violence is the fucking American commercial media entertainment complex to include its supposed "news" appendages. What the media and the totalitarian Twitter twats want (as Alex Berenson noted in his tweet above) are endless hard lockdowns. 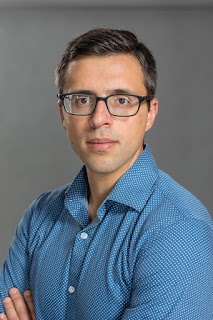 
This is widespread urban violence that erupted since the BLM / Antifa civil war started in late May -- and it is distinct from but associated with that civil unrest with the former being directly encouraged by the Democrat Party leadership and the latter just naturally flowing from it (reflecting the collapse of a society that's already barely hanging together). 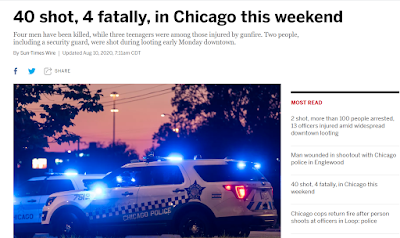 Chicago these days under the nominal mayoralty of Lori Lesbian Lightfoot -- a woman who calls to mind Aunt Ester's hilarious putdown of "A FISH-EYED FOOL!!" -- resembles Sarajevo 1994. 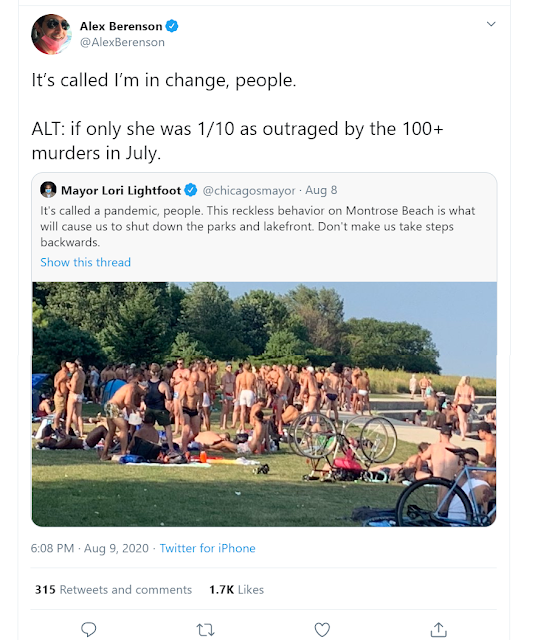 Instead, Lori Lesbian Lightfoot is more agog that people are enjoying themselves outside on a Lake Michigan beach. In fact, in her ethical degeneracy, Mayor Lightfoot actually seems to love the city's quasi-civil war-scale violence and mayhem -- somehow, it helps her with her "base" in some Antifa / BLM / WOKE fashion.
Updated 8:02 p.m. 8/10/2020 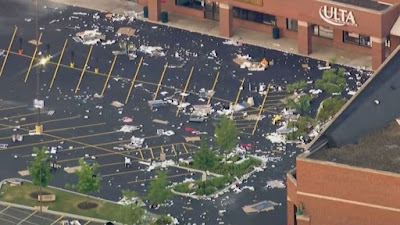 I didn't realize -- although I should have by the image shown in the above tweet screenshot -- that the lakeshore event was a gay one with mostly white men. No wonder Lori Lightfoot, an angry African American lesbian, went into such a dark place. This is why she sicced the police on these silly gay men but ignored her city's weekend spasms of violence. 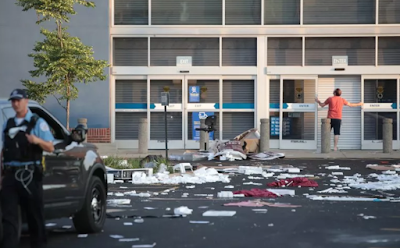 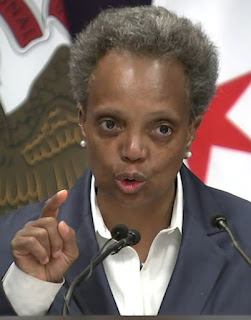 That's because vast swaths of her city where so many urban African Americans reside are experiencing a gunfire-ridden crime wave rivaling any 19th Century Wild West saloon town.

As for the BLM/Antifa looting that erupted, that was mostly maskless, too. But, as mentioned, Lori Lesbian Lightfoot loves maskless mayhem. 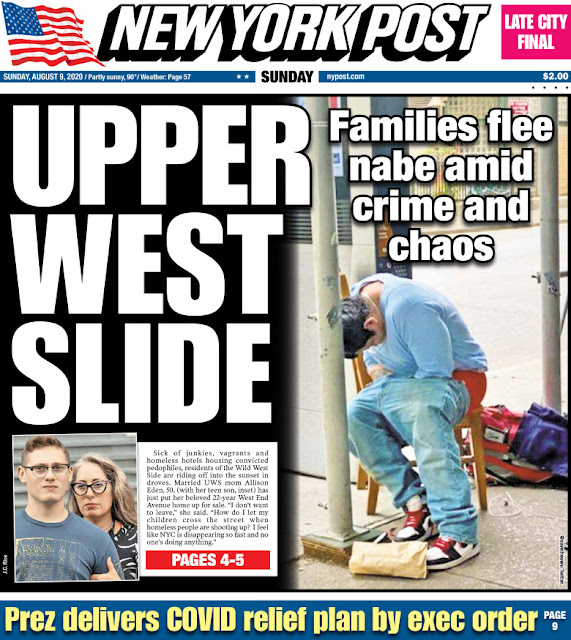 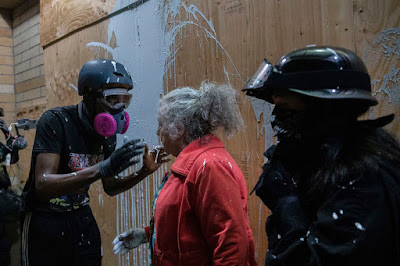 And in Portland, its pathetic jokester of a mayor was forced to call out all the Antifa / BLM domestic terrorists for trying to lock police officers in buildings and set those structures on fire using accelerants. In particular, Ted "Ass Hat" Wheeler had to point out the obvious fact these things do not represent "peaceful protests" but instead represents attempted, if not actual, murder -- as if the degenerate Millennial and Gen Z transgendered and/or trans-liquefied mobs would listen to him. 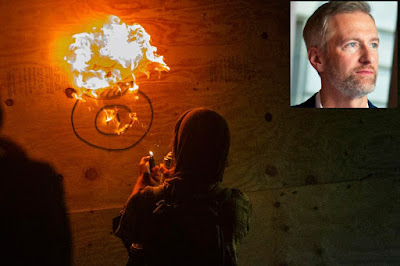 But not to worry, though, because the borderline situationally retarded SOCIAL JUSTICE WARRIORS in the collapsed husk of American Higher Education are focusing on what really matters, the racist white supremacy embodied in mathematics itself: 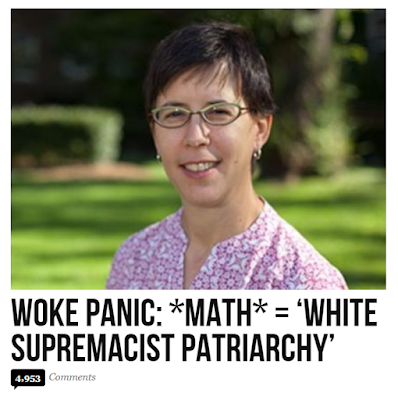 The story itself to the above headline is here and includes the name of the dingbat woman herself (or whatever gender and pronoun she uses in her continuous battle against "systemic racism"). People like her live for that sort of attention.
OK, that's all for now. I will try to post a new entry tonight.