Some Late Night Notes from Charlotte, N.C., in a Pleasantly Comfortable Hotel Room Close to CLT -OR- Recounting the Day's Air Travels 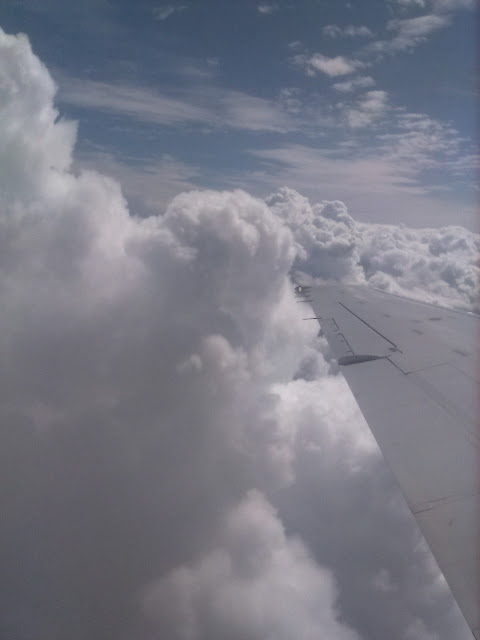 
Well, I made it safely and soundly to Charlotte, N.C., as part of my two-day, multi-pronged, deeply reluctant return to Washington, D.C., after a nearly 10-day visit to see my dad and spend time at the Florida Atlantic seashore.
I'm in a pleasantly comfortable, quiet, well-air conditioned hotel room in inherently tongue-twisting hotel chain Wingate by Wyndham. This particular hotel is located a short distance (as in, under two miles) from the Charlotte Douglas International Airport. 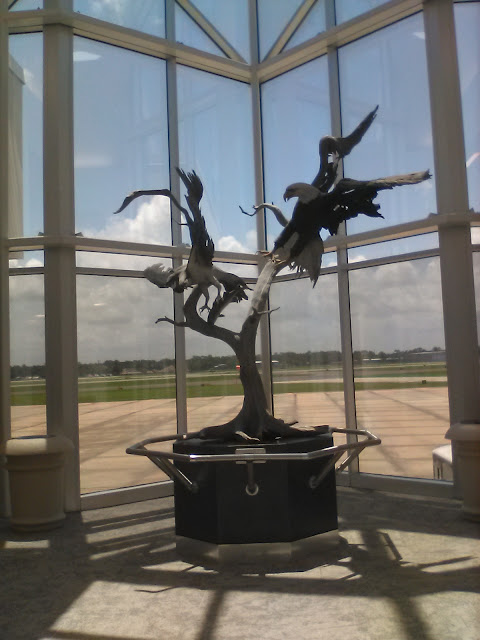 A dramatic sculpture of a bald eagle and another bird seeming to fight over a fish located in the tiny terminal of Daytona Beach International Airport (DAB), 1:18 p.m., August 23, 2020
I think this sculpture was there a year ago. However, a quick internet search turned up nothing on this artwork.
*******


I really don't anything about Charlotte, N.C., except that it is a major banking center and has lots of mega-churches and suburban residential sprawl even inside its extensive city limits. That is, it is a very typical modern American Southern city.
I think the tall, attractive Nellie's bartender, Derrick, is from Charlotte. Or maybe it's Rayleigh. I know he's from North Carolina. 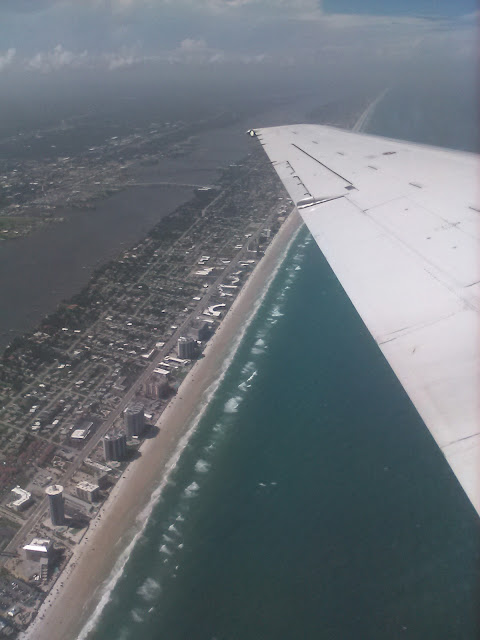 Crossing the Florida coastline over Daytona Beach on ascent from DAB, 3:14 p.m., August 23, 2020
I sent this picture to Gary and he immediately looked up what is the towering circular building toward the very bottom the image: Peck Plaza. It is at the southern end of Daytona Beach. (The pier is not visible in this image because it is hidden by the wing.)
*******


Anyway, I arrived here on Delta from Daytona Beach International Airport ("DAB" in its three-letter IATA code) via Hartsfield Jackson Intersectional Aerodrome International Airport ("ATL" in its IATA code).
As for Charlotte Douglas, its three letter IATA code is "CLT," which sounds more than a little dirty. Its ICAO code -- to include its weather station -- just adds the "K" in the fashion of most large U.S. airports, i.e., KCLT. (The others are, yes, KDAB and KATL.) 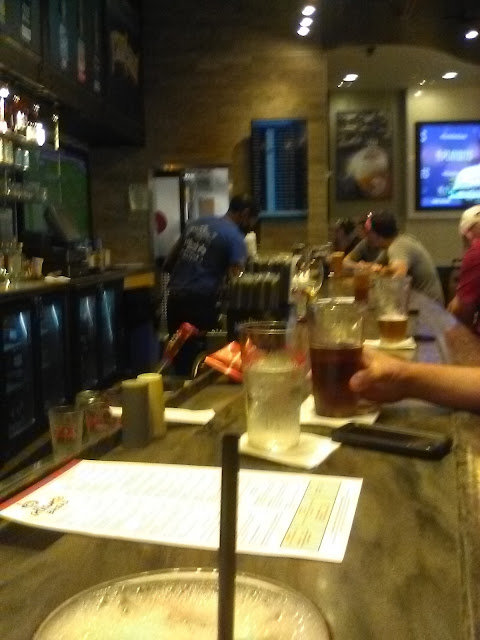 
The flight from Atlanta was an interesting one in terms of dramatic looking clouds due to a small cluster of thunderstorms that formed over the Charlotte area around 6 p.m. The jet was actually in a circular holding pattern for maybe 15 minutes -- and jets got stacked up at the airport and "resequencing" was necessary. 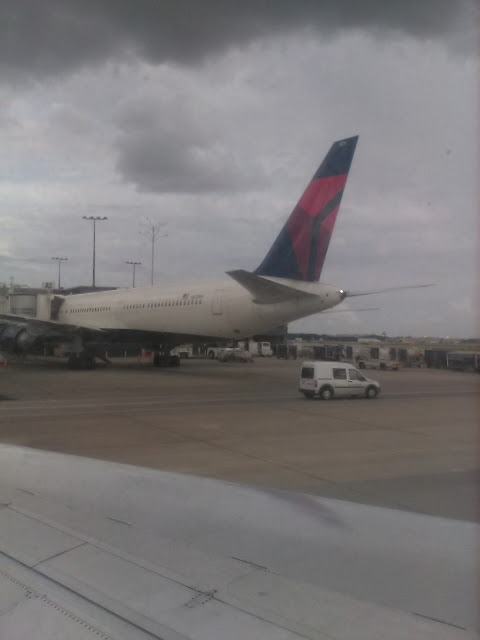 
On final approach into CLT, I saw another jet descending to a parallel runaway appear to traverse the ominously dark base of a torrentially downpouring thunderstorm (see admittedly low-res quality pics below). The skyline of Charlotte was actually obscured by the heavy rainfall. (A rain shower similarly obscured the Atlanta skyline.) Ascending from Hartsfield - Jackson Atlanta International Airport, 5:54 p.m., August 23, 2020
The Atlanta skyline is visible -- illuminated in sunlight -- in the near distance.
While there, I texted a fellow I know named Chris -- not to be confused with my now-former-friend Chris who also lives in Atlanta. I also know two other men named Chris.
******* 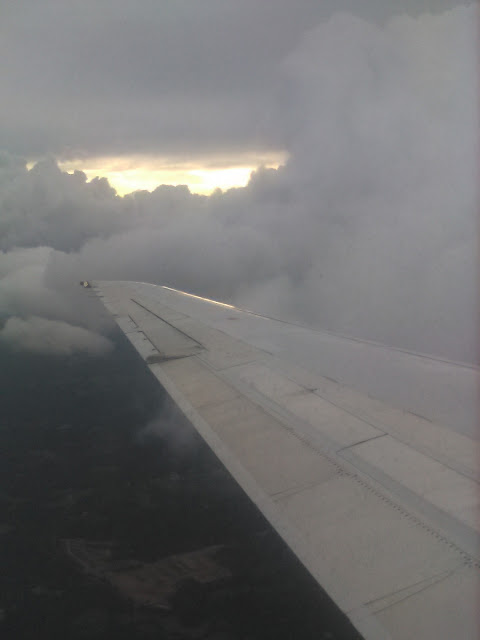 Descending into Charlotte Douglas International Airport ("CLT"), 6:37 p.m., August 23, 2020
A word about this image and the one directly below: A small cluster of thunderstorms had formed right over the immediate Charlotte area. This pictures were taken looking west or maybe northwest. These clouds looked so awesomely dramatic as the jet was tearing through them. 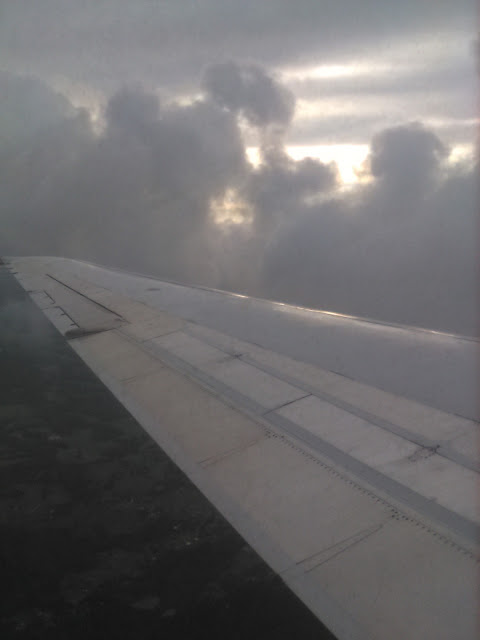 Descending into CLIT, 6:41 p.m., August 23, 2020
These clouds were shaded charcoal gray yet fringed in yellowish-orange diffuse light, and one of the clouds had as sort of top protuberance that looked like a giant's head -- and the entire effect was that of a gigantic yet ghostly Sphinx staring toward the sunset.
*******


Having now flown on American and Delta in the steadily more ridiculously absurdist time of Covid, I can say that I prefer Delta because American provides precisely ZERO in-flight services even while the endlessly repeated flight attendant announcements include endless threats about being banned for life from its airline service if one refuses to wear a mask.
Delta also caps the number of passengers per jet, which has the unintended consequence of making the flying experience more pleasant. 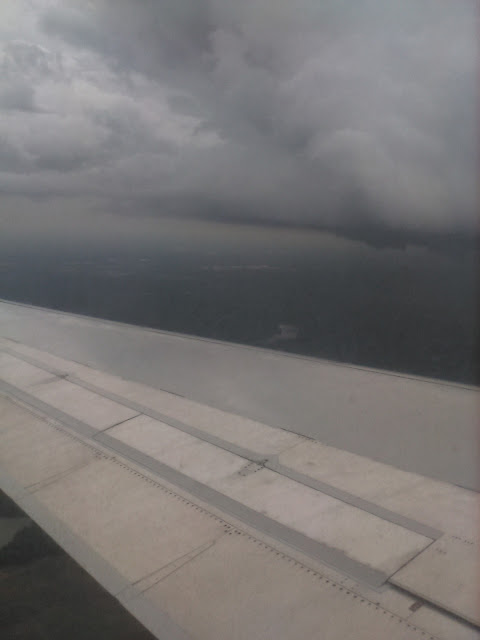 Descending into CLT, 6:44 p.m., August 23, 2020
This was actually scary looking to me -- since it appeared to be a severe thunderstorm with squall-like base, but apparently, it wasn't that bad since jets were flying near it.
*******


Of note, I actually lost a $20 bill -- it fell out of my pocket while I was seated or getting up -- and this fellow (with a Maryland flag design on his t-shirt) who had been on the flight with a lady I assume is his wife actually came up to me in the terminal and gave it back to me.
I was kind of startled and really didn't know what to say.
As for leaving the airport, my bag was immediately on the carousel and I was able to get a taxi very quickly at CLT and the driver brought me to the hotel in what was literally a five minute drive. 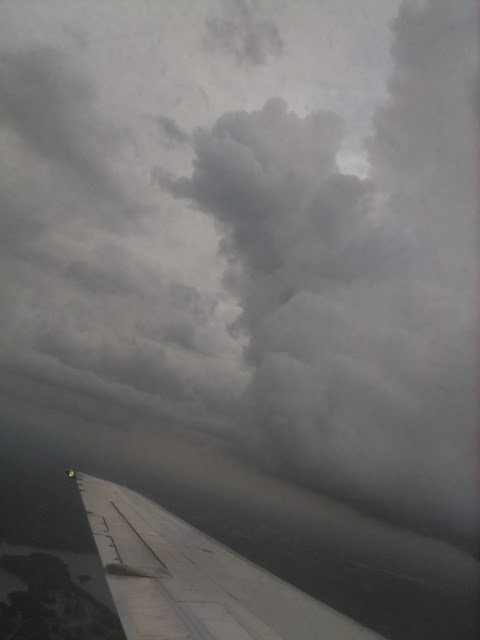 
While at Hartsfield, I was able to stop at an airport restaurant / bar and, as a pleasant surprise, bar seating is permitted. Of note, the daily new cases and fatalities trend are both dropping in promising fashion but with the usual weekly cyclicity that is simply an artifact of the reporting.
This downward trend, of course, is deeply offensive to the Lockdown Left that can't enough Covid panic porn as part of its fanatical anti-Trump monomania.
About all of that, I've been keeping up with my devotional reading of Alex Berenson's twitter feed but I won't get into that now. 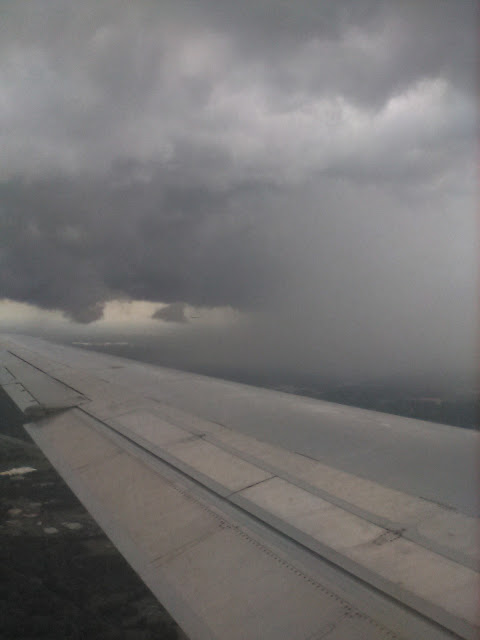 Final descent into CLT with a thunderstorm near the airport, 6:45 p.m., August 23, 2020
If you look really closely in my low-res cell phone image, you can see another jet also on final approach.
*******


So, tomorrow, I am to drive back to D.C. with Tim. He is staying with his brother in the Charlotte area as part of a two-week trip that took him down to Florida -- including an unlikely stop in Flagler Beach to see me with a visit to the Iron Boot Pub.
Tim is a relentlessly early riser and we are departing here at 8 a.m. I'm unsure if it is supposed to be a mad dash back to D.C. 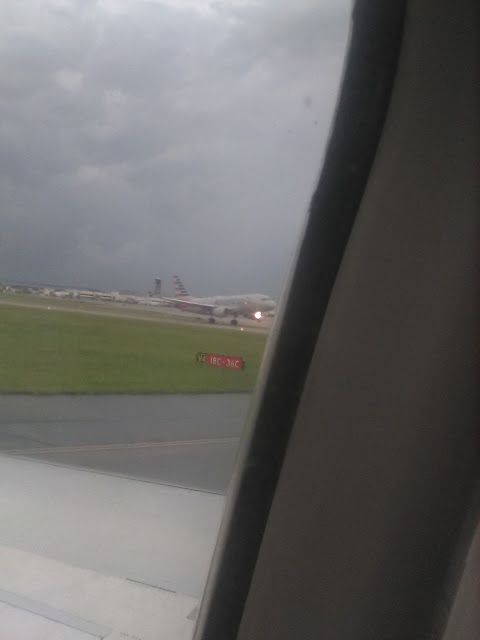 A jet takes off from CLT, 6:54 p.m., August 23, 2020
There was a backup of about two dozen jets at CLT as a result of the weather-related ground stop. My jet had just landed and needed to let a few jets on final takeoff get airborne. And, yes, when I saw this, a vision of the Tenerife air catastrophe flashed through my mind.
*******


OK, I guess that's all for now. I had better get to sleep. I'm very tired, having gotten up quite early after a lot of drinking at the hotel in Daytona Beach last night.
--Regulus
Posted by Regulus at 12:44 AM