A really awesome "zooming in" animation using actual telescopic images of the fantastically awesome star Betelgeuse.
By the way, Betelgeuse has resumed its normal brightness -- with that truly startling dimming late last year into early this year ended for now.
*******


Saturday afternoon.
Here in my little spot of Planet Earth, it is a cloudy, warm, and humid afternoon, air temperature at the 1 p.m. hour 80F with a 69F dew point, at least as measured at KDCA.
I'm having a series of issues with Blogger to include the following:

Blogger is trying to force me to switch to the Blogger format, which I realize is inevitable, but I don't want to do it at the present time because, well, I'm just resistant and reluctant to make those kinds of changes. I'm a middle aged white man (is that a hate crime now?) and that's how I am.

Secondly, Blogger is forcing me to do the two-step authentication whereby you get a text code that you have to entire as part of the logon process.

Such two-step authentications are pretty much de rigueur now for any internet-based account logon activity, but I don't recall setting it up for Blogger.


When I look at my broader Google account, it indicates that two-step authentication is turned off, but that might be referring just to Gmail.
Thirdly, Blogger is telling me I've had too many failed authentication attempts, which I don't understand -- unless something else more insidious is happening -- and I was only able to logon by using my email backup. 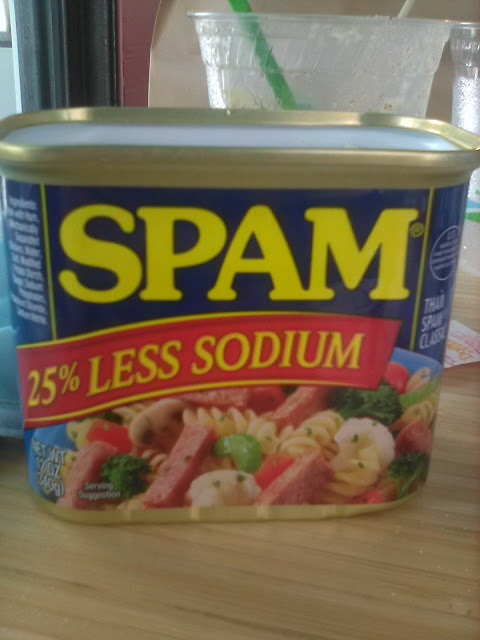 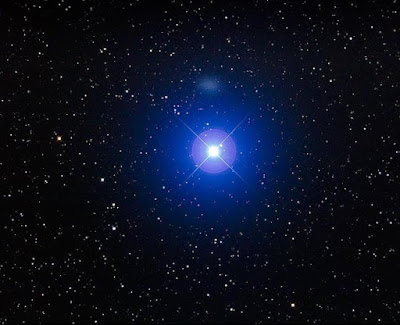 
It would have happened this month, but because I will be away for 10 days (visiting my father down in Florida between Aug 14 and Aug 23) with little, if any blog activity, that will probably push the 3,000th entry into September.
Just FYI, entry 1,000 occurred on August 31, 2013 (just about seven years ago) and entry 2,000 occurred on August 28, 2016 (just about four years ago) -- so these "millennial" entries tend to occur in late August.
(I need to update the video link in entry #1,000 and get rid of M. SHIT-A-BILLION garbage. I'll do it later tonight.) 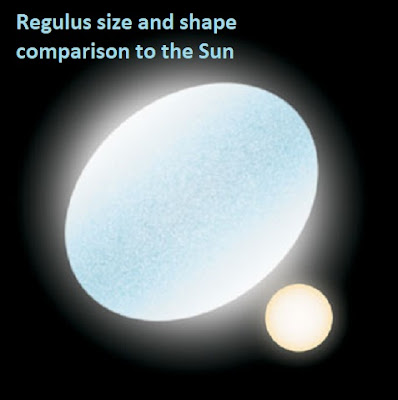 Regulus compared to the Sun; Regulus spins so fast, it is far more oblate-spheroid shaped than our fair star.
*******


Speaking of big stars, Antares is an incomprehensibly gigantic star -- not to mention a prime supernova candidate -- that manages to be even larger at the end stage of its life than Betelgeuse. If placed where our Sun is, it would extend out into the Asteroid Belt -- about midway between Mars and Jupiter. But even with that gargantuan size, Antares' mass is only 12 times that of our Sun. 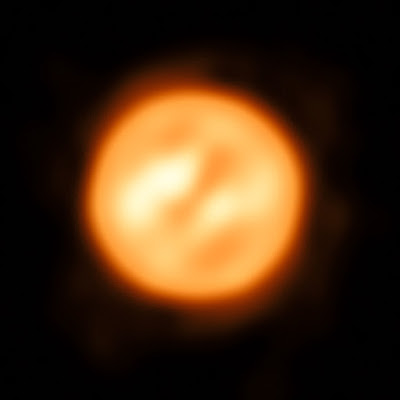 
I estimate that the last 100 148 months, I have spent at least 10,000 hours blogging -- which is to say, just over 14 months (!) of total time. Now that's assuming 3.5 hours per entry, and some have certainly taken 5 to 6 hours to compose.
Yet, someday, this entire blog will just disappear into the internet ether and leave nothing behind. But that's true of life in general. 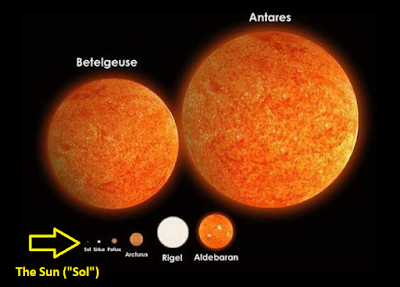 Size comparison of some notable stars with our own Sun ("Sol") that tiny speck in the lower left
FYI: Our star is "Sol," which is why we are in the Solar System -- technically, the Solar Stellar System.
*******


My original Arcturus blog (I have a second one that I never update) dates back to mid-2006, and it lasted about 18 months with approximately 200 entries. I'm not including that in the above tally of blogging time. (The original reason for it has long since vanished as anything of meaning.) 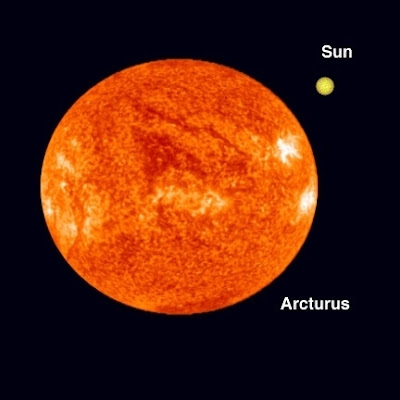 Arcturus as a bloated, late middle-aged red giant of a star
*******


But I don't want to make this an extended afternoon entry. My plan for today is to trek on the Metro down to Old Town Alexandria. I will try to post another entry tonight.
--Regulus
Posted by Regulus at 2:13 PM