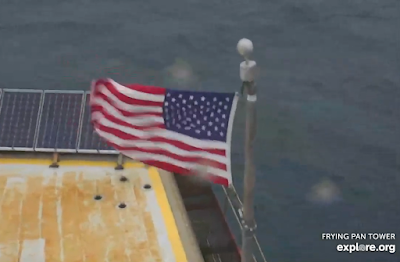 Time for an update on Tropical Storm Isaias.


For starters, honestly, I'm not entirely sure how to pronounce the name, but I've got the spelling correct -- which is more than I can say for the National Hurricane Center (NHC) forecaster who wrote the 11 p.m. updates the past two nights. He misspelled it repeatedly, and that's just not OK for NHC meteorologists involved in an active tropical cyclone situation. 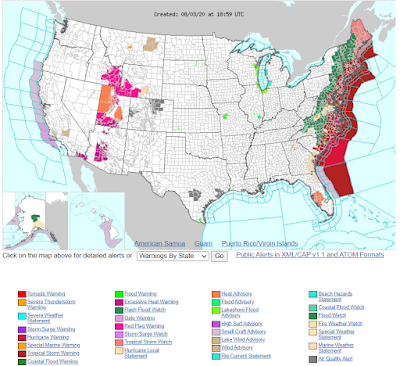 NWS U.S. weather advisories with legend,
updated 1859 UTC 03 August 2020
Remember that the map itself can only show one weather hazard product -- always the highest priority -- at a time. If you want to see the full weather hazards map listed by priority, see here.
******* 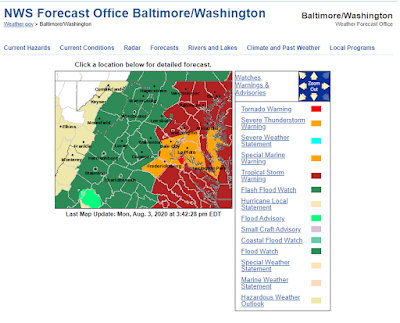 NWS Baltimore / Washington Forecast Office ("Sterling" or "LWX") county warning area (CWA) advisories map, updated 3:42 p.m. EDT August 3, 2020
There is presently a tropical storm warning in effect on the tidal Potomac River and even here in D.C. itself -- something that has not happened, I believe, since Isabel in 2003, so 17 years ago.
*******


That forecaster is one of those 40-year career civilian servant meteorologists with lifetime sinecure who, older than most rocks and as cocksure as the Colorado wending its way through Canyonlands National Park, doesn't have to worry about anyone calling attention to that sort of a mistake, much less the pushback a younger forecaster would get.
Anyway, that aside, below is the 11:00 a.m. discussion by another NHC forecaster that is actually useful rather than just box-checking. 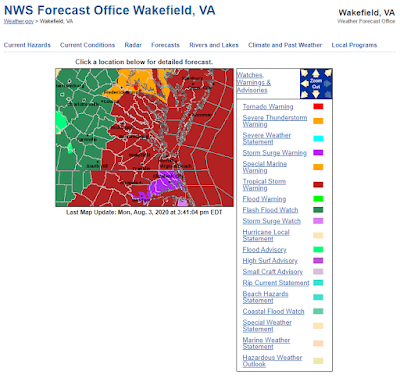 NWS Wakefield Forecast Office ("AKQ") CWA advisories map, updated 3:41 p.m. August 3, 2020
It's lit up like a frickin' Christmas tree. What surprises me is that a severe thunderstorm warning (#4) has a considerably higher priority than a storm surge warning (#18). A tornado warning ranks #2 -- behind only a tsunami warning (#1)!
*******


What's been odd and frustrating about observing Isaias is that after the satellite imagery has not been very useful, especially at night, in trying to find the central circulation. The cyclone encountered heavy shear as it crossed the Bahamas and made its close-pass approach to the Florida Atlantic coastline yesterday -- the directional shear between the surface and upper level was basically a full 180 degrees and it was only the constant convective cycles displaced to the northeast of the center that was counter-balancing the westerlies above the storm. 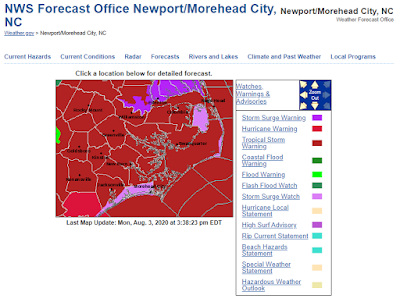 
The cyclone is still sub-hurricane strength as it moves northward toward the South Carolina coastline, but as the discussion below explains, the system is about to get caught up in a jet stream / upper level trough that is anomalously strong for early August, which will accelerate it to the north-northeastward. Landfall is expected between Myrtle Beach, S.C., and that old hurricane magnet of Cape Fear, N.C. (Frying Pan Shoals, anyone??). 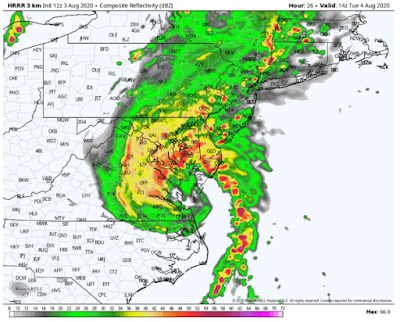 
The system might intensify a bit back to category 1 hurricane status -- and even if it doesn't, my hunch is NHC will classify Isaias as a low-end hurricane rather than a high-end tropical storm because the former gets media and public attention in a way that the latter does not. And in a situation like this, that's actually the appropriate thing to do. 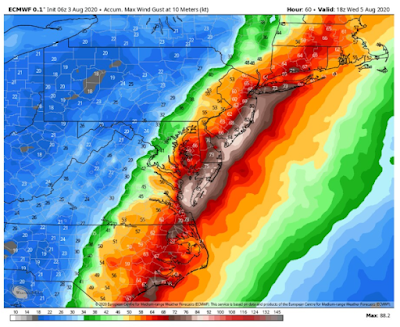 
The storm's expected path would take it within 100 miles of D.C. itself, maybe even 50 miles. The former is close enough to bring tropical storm winds on the Chesapeake Bay and the latter is close enough to bring them into the D.C. Metro area itself. Heavy and possibly flooding rainfall is expected east of the Blue Ridge along the coastal plain and piedmont. The QPF numbers for Metro D.C. and Baltimore areas are still in the 4 to 6 inch range.
Yes, this could all change -- and it could "bust" for our area, but that's what we have right now. 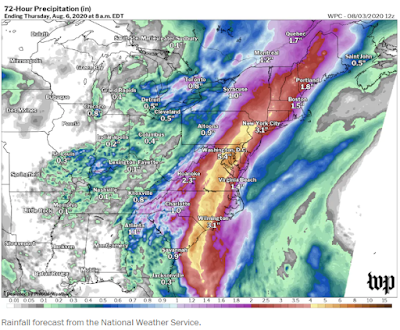 
OK, below is today's 11:00 a.m. EDT discussion from NHC along with some afternoon radar imagery. My next planned update will be later tonight or tomorrow.
--Regulus 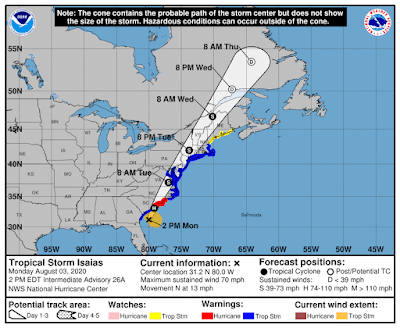 
Satellite and radar data indicate that Isaias' convective organization has become a little disheveled since the previous advisory, but this is to be expected since the tropical cyclone has been undergoing bursting periods about every 8 hours or so beginning overnight around 0600-0900Z.
Thus, the system is due for another re-organization phase shortly if it holds true to form. That may already be underway based on recent radar and recon data showing a slight eastward shift in the center position.
The highest 700-mb flight-level wind observed has been 63 kt, which reduces to about a 57-kt surface wind. Jacksonville Doppler radar velocities north and north-northwest of the center have been around 60 kt at 9,000 ft, which equals about 54 kt surface winds.
The initial intensity will be held at 60 kt, perhaps a little generously, for this advisory despite the recent rise in the central pressure to around 998 mb.


Isaias is still moving northward but a little faster at 360/11 kt. The track forecast reasoning remains essentially the same as the previous few advisories, with Isaias expected to gradually turn toward the north-northeast later today and begin to accelerate by this evening.
The latest NHC model guidance is more tightly packed about the previous advisory track, so only minor tweaks were required. The new NHC track forecast lies very close to a blend of the multi-model consensus aids TVCA, GFEX, TVCX, and NOAA-HCCA.
Current westerly vertical wind shear of 20-25 kt is expected to decrease somewhat during the next 12 h and also become more southwesterly, which will be in better alignment with Isaias' forward motion vector.
The decrease in the shear should result in less tilt to the cyclone, allowing Isaias to strengthen and regain hurricane status just before making landfall, and most of the intensity guidance shows a 60-65 kt system at that time.


After landfall, Isaias is forecast to only slowly weaken due to interaction with an unusually strong winter-type jetstream that will be possessing winds of 100-120 kt. Expected strong baroclinic forcing will keep Isaias' circulation intact and also produce very strong wind gusts along the Mid-Atlantic states tomorrow.
As a result, the gust factors at 24-48 h have been increased above the standard 20 percent in the Forecast/Advisory (TCMAT4). The cyclone is forecast to be absorbed by a larger extratropical low over Canada in 3-4 days.


Key Messages:
1. There is the danger of life-threatening storm surge inundation along portions of the immediate coastline and adjacent waterways of northeastern South Carolina and the North Carolina coast in the Storm Surge Warning area. Residents in these areas should follow advice given by local emergency officials.
2. Isaias is forecast to regain hurricane strength before it reaches the coast of northeastern South Carolina and southern North Carolina, and hurricane conditions are expected in the Hurricane Warning area by this evening. Preparations should be rushed to completion.
3. Isaias is expected to bring widespread sustained tropical storm force winds and wind gusts to hurricane force to the mid-Atlantic coast Tuesday, which could cause tree damage and power outages. Tropical storm conditions are expected to reach southern New England on late Tuesday and are possible along the northern New England coast Tuesday night and early Wednesday.
4. Heavy rainfall will result in flash and urban flooding, some of which may be significant in the eastern Carolinas and the mid-Atlantic, through Tuesday night near the path of Isaias up the East Coast of the United States. Widespread minor to moderate river flooding is possible across portions of the Carolinas and the Mid-Atlantic.