First Day of the Second Half of Summer 2020: Saturday Early Afternoon Multi-Topic Update

July 31, 2020 Google Doodle honoring the late Ivatan and Philippine-American painter, Pacita Abad
I just like it. And it is a nice homage to her style.

Saturday early afternoon, first day of August 2020 and, I guess, the start of second half of summer.

It is a summery warm and thickly humid day with a noon hour temperature of 84°F at both KDCA and KBWI while it's 81°F at KIAD and dew points as high as 73°F.

The forecasted high is only 86F but that's too low given the time of year and sunshine right now. Rather, temperatures should reach at least 90°F today, maybe 92°F.

There is a 50 to 70% chance of showers and thunderstorms later today and tonight -- and continuing into early next week.

All in all, a non-apocalyptic summer pattern. 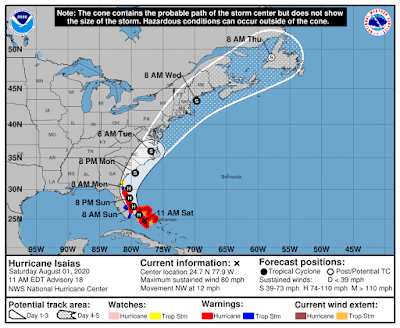 
Hurricane Isaias, a low-end category 1 tropical cyclone with top sustained winds of 80 mph, is approaching the Florida Atlantic coastline, which it is expected to brush on Sunday 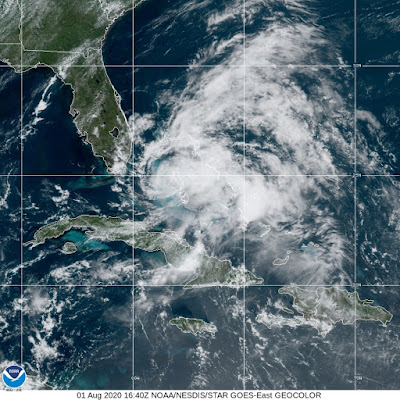 GOES 16 (GOES East) GeoColor satellite image, Caribbean Sector, 1640Z 01 August 2020
No, it doesn't look that impressive at all. It looks more like a tropical storm rather than a bona fide hurricane.
*******


Isaias, in whatever form, should move past my dad's latitude of Flagler Beach late Sunday night into the wee hours of Monday. A number of models continue to show the center actually coming ashore somewhere around Vero Beach, but the NHC center track line keeps it offshore and instead coming ashore as a tropical storm late Monday night around Myrtle Beach.


Isaias is then forecasted to move just over / up the Eastern Seaboard -- crossing the Delmarva on Tuesday afternoon -- bringing gusty, heavy rainfall even here into the D.C. area, at least the eastern suburbs.
My Florida trip to visit my dad is in just under two weeks. 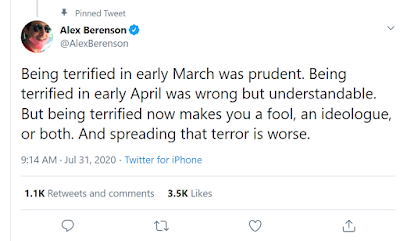 Screenshot of Alex Berenson's spot-on tweet from yesterday about Covid-19 fear and terror in the early spring versus now
The last part of this is directed at the abomination of the American commercial media/entertainment complex, which itself is deeply wrapped up in the media's self-destructive pathology that goes beyond just concerns for "ratings" and money/attention.
*******

Hospitalization trends in the most affected Southern states - Alex Berenson tweet, July 31, 2020 (screenshot)
That there hasn't been mass death -- nothing on par with what happened in New York or the death they had gotten themselves eagerly worked up for -- is deeply upsetting to the WOKE, Covid-19 panic porn-fixated media.
******* 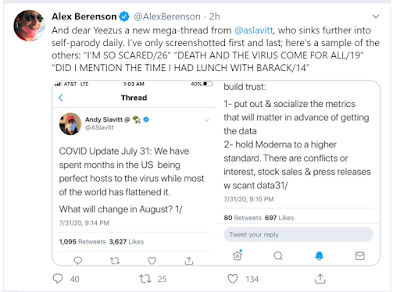 Andy Slavitt seems to be sinking into megalomaniacal insanity
*******


For today, I'm going to get out of D.C. and go to Alexandria for the afternoon.
D.C. is, of course, like the rest of Big Blue urban and suburban America, still deep in its long-term malevolent lunacy courtesy the Covid-dick-teen mental and media pandemic and the WOKE Cultural Revolution. 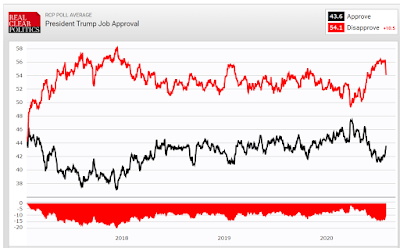 
There are a few hopeful signs in that Trump's national approval numbers are up a bit -- although the 538 adjustments cause it to appear negligible; it is more apparent in the RCP trend -- see images above (RCP) and below (538). It is on the order of maybe 3 points over the past few weeks. 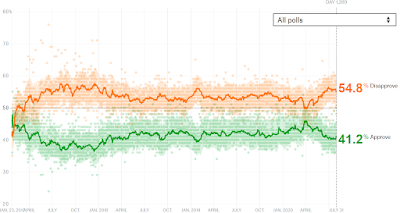 
In terms of the presidential race, nationally, Trump is still considerably behind Senile Joe and whoever will be his she-male BICOP VP candidate vetted by the AOC Squad and so screaming REPARATIONS NOW!! However, there is evidence to suggest the race has tightened noticeably in the past few weeks, especially in the key battleground states.
It is still an uphill climb, though, from a deep valley. 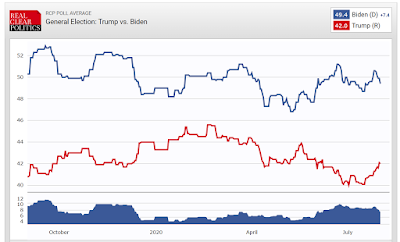 
OK, I'm going to sign off for now. My plan is to post another entry tonight.
--Regulus
Posted by Regulus at 1:49 PM