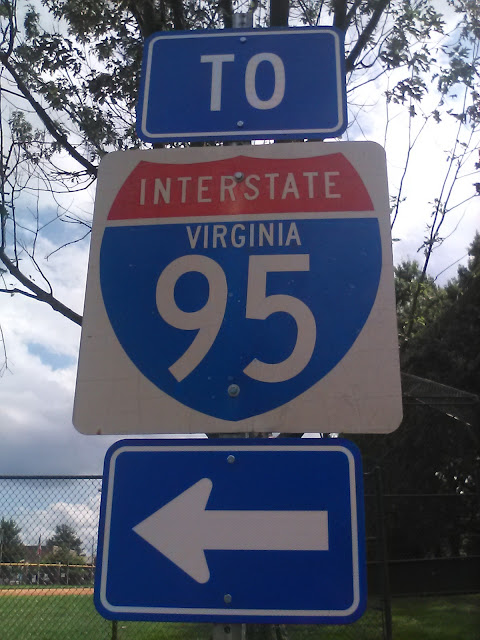 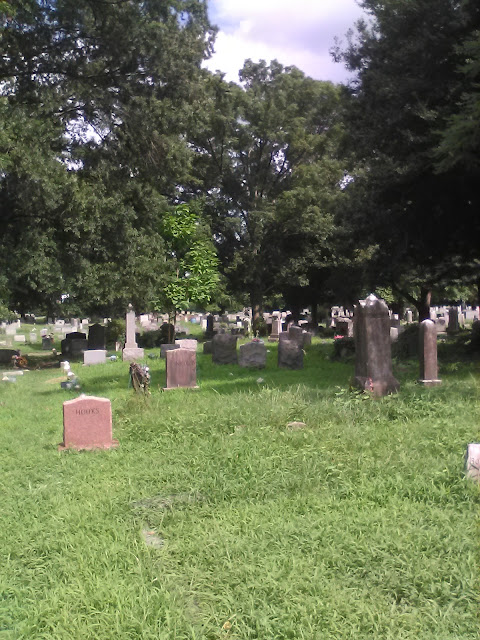 
The topically-unrelated outdoor pictures are those taken during my Saturday (yesterday) afternoon trek to Alexandria whence I rode the Metro from Foggy Bottom to King Street stations. I got off at King Street station and walked to Jones Point and thence to Old Town. 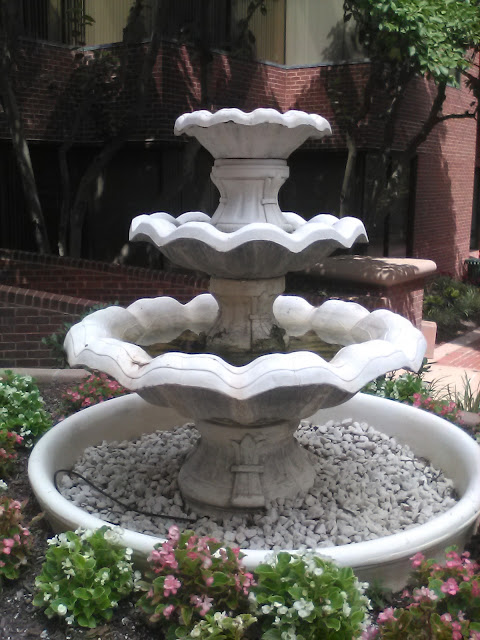 
In Old Town, I stopped for a nice early evening dinner at Union Street Public House in the bar area at a table for one (maybe two, but it was just me) by the door. I then rode the Potomac River Water Taxi to District Wharf and thence walked home. And, yes, I wore requisition face diaper on the boat. I have additional pictures from the walk that I'll post in a subsequent entry. 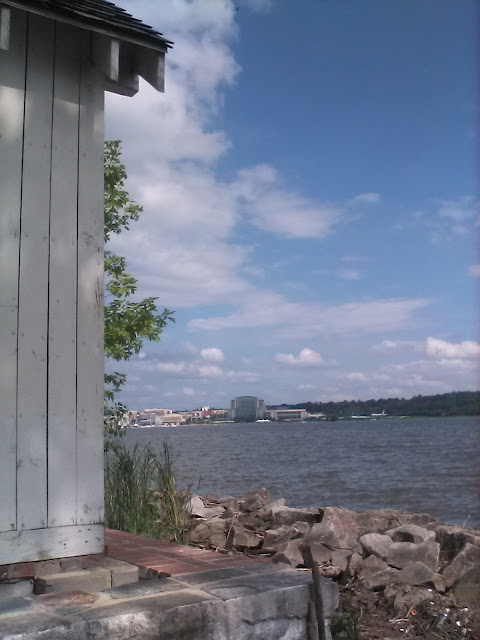 
The Metro itself -- long a shitty, sometimes threatening-feeling, and always deeply unpleasant experience -- has been worse than ever with the mind-numbing, infinitely repeating auto-announcements about THE COVID-FAKE-TEEN-related contrived upheavals to THE SYSTEM. 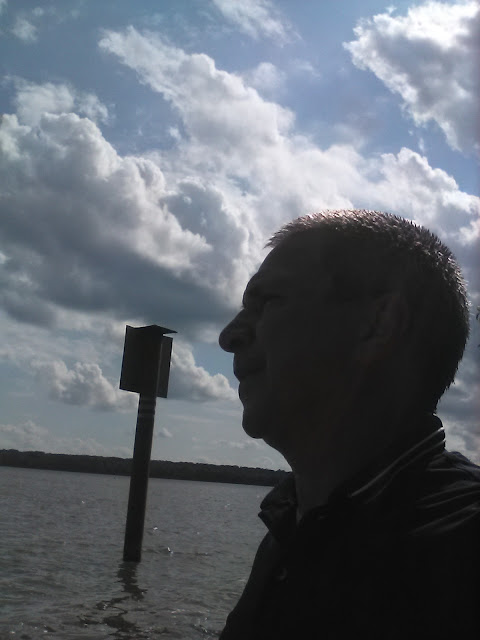 These contrived upheavals mostly involve lifetime sinecure-safe Metro employees getting even more money for doing less than the usual nothing. The public schools teachers unions have drawn an important lesson from them. 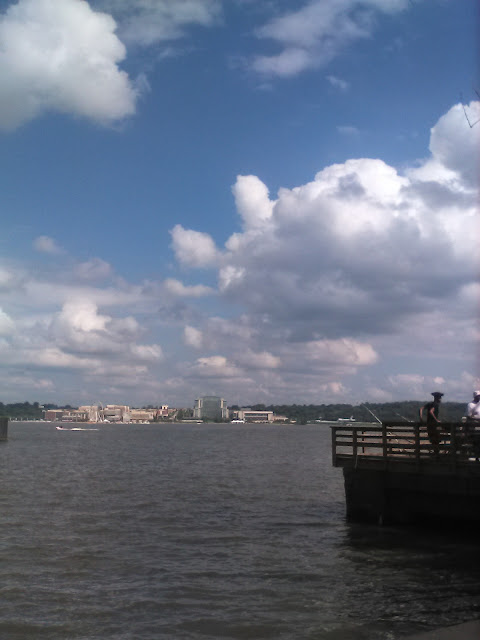 
I know that I've been harping on this situation in multiple entries this summer, but it's just necessary in order to call attention, or at least record for history's sake (in whatever fashion this blog survives, and I realize it may very well just vanish into the ether in a few years), to the ever-more-farcical Covid 19 situation in the United States. 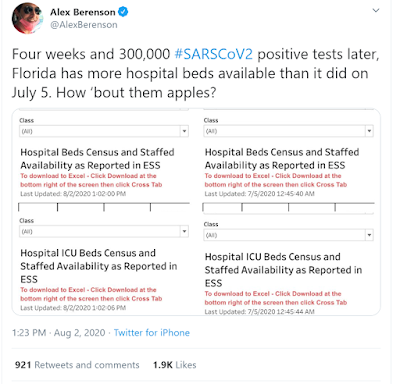 It is a situation that is ever-more-detached from the actual reality of it precisely because it is so wrapped up in the overall WOKE and morally panicked Cultural Revolution that represents nothing less than the dissolution of the United States as a single cohesive nation. 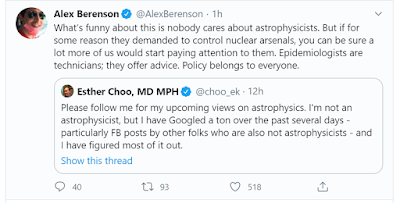 This entry contains a number of images of Alex Berenson tweets over the past two days that are so spot on and put the situation in perspective. 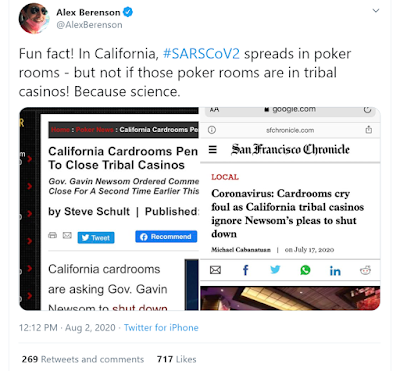 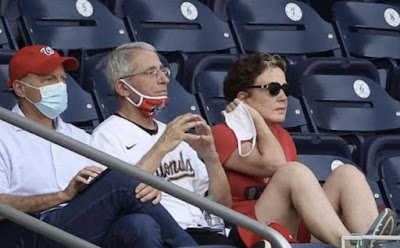 
Physician Fauci is the Good and the Great Doctor who is in charge of precisely NO POLICY decisions but is forever opining on things that sexually arouse the CNN / MSNBC Thought Police "Squad" of Cooper, Cuomo, Lemon, Maddow, and Hayes precisely because it involves forever shutting down society for an ever-less-lethal pseudo-pandemic. 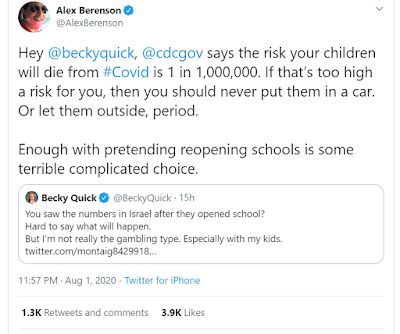 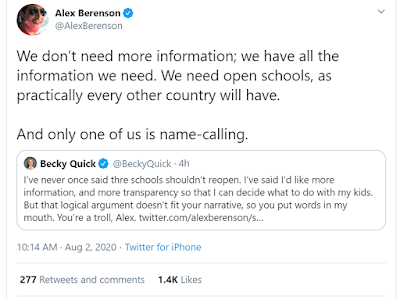 Remember: That's what the Illiberal Left media want: Endless shutdowns and blowing up society for purposes of totalitarian control of everything you eat, drink, wear, think, hate, and love. That's the end game. For Democratic pols like Nancy Pelosi, it's keeping people addicted to government cash while they rot away home under lockdown. 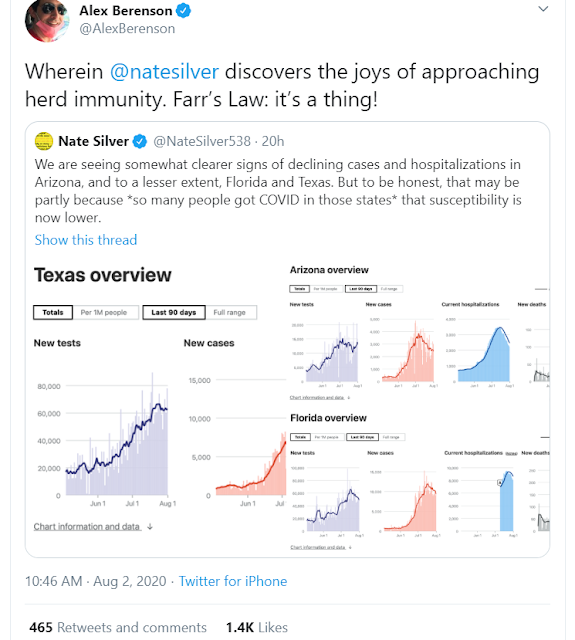 Indeed, if you want to see the sick sexual arousal that the media get out of destroyed lives in the context of this ever-more-fraudulent pandemic, look no further than this Post article … 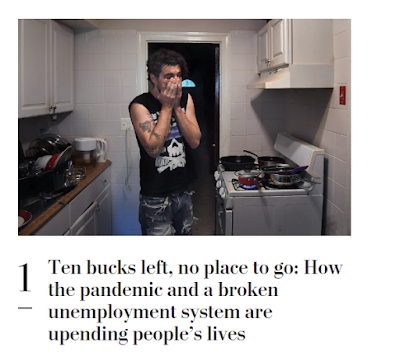 To be clear, I am NOT posting the link to this article (you can find it easily enough) because I don't want to give it that bit of dignity. Suffice it to say, the Postie bitch(es) -- either vicious Baby Boomers who refuse to retire or ass-hat, mind-hived Millennials -- who wrote it CANNOT get enough of this human misery, luxuriating in it. And it's a fucking crime. 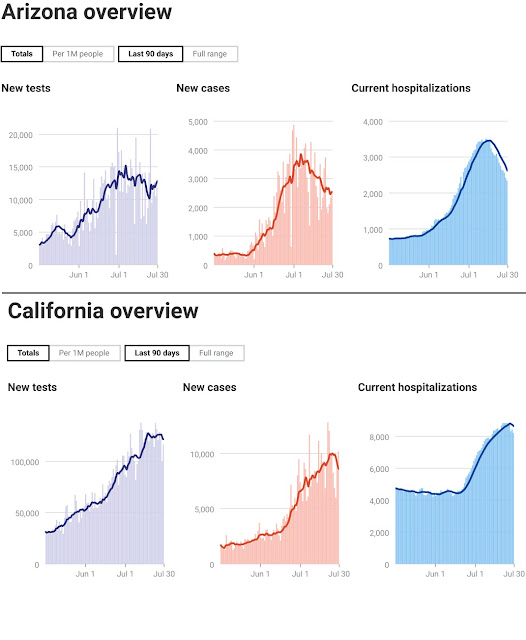 
Oh, and let's not forget that the "SOUTHERN AND WESTERN OUTBREAK!!" -- the one that the whore-media was ejaculating over at the prospect of the creation of a Covid-19 version of a Khmer Rouge killing field -- has clearly crested and is declining in terms of cases and hospitalizations. 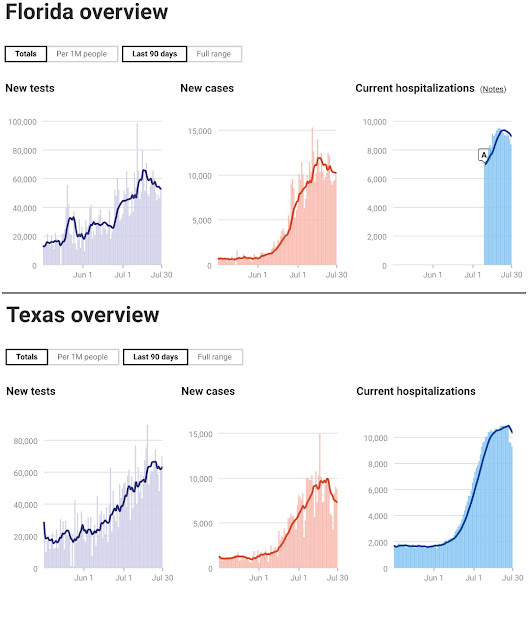 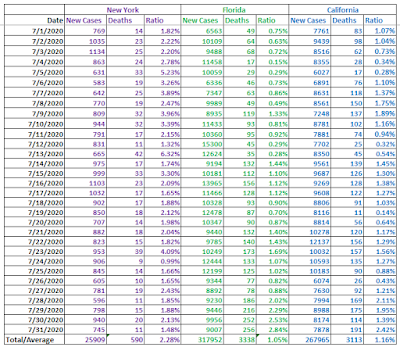 
And this happened over the past six weeks with a case fatality ratio that was only a tiny fraction of what it was in New York or New Jersey in March and April (1.0 to 1.2% versus 8 to 9%) -- and, to be clear, it's only that high because of the disproportionate impact on the very elderly (75+) or sensitive populations. For reference, see above and below images of tables of daily cases-to-fatalities ratios, as indicated in the captions. 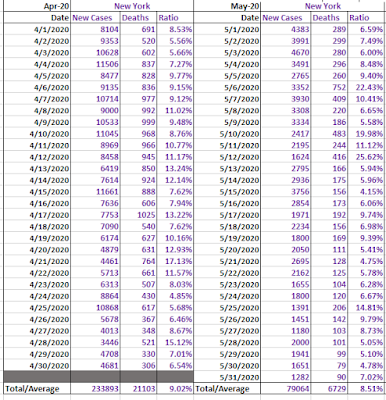 
Indeed, for the vast majority of the population, the CFR is no higher than a seasonal influenza. But these crinkled and bent, all-around-dick-headed oldsters have to gad about in their make-shift hazmat suits while Anderson Cooper, Don Lemon, and Chris Cuomo have a circle jerk to this endless, pointless human destruction.
Speaking of the oldsters, namely, the Good and the Great Dr. Fauci, I'm still marveling at this rapid-fire grilling he got from Rep. Jim Jordan during a hearing held on, I think, Friday morning:
What blazes through in this exchange is Fauci's smug, arrogant assholery AND his leftwing politics. 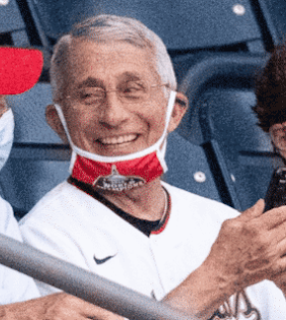 Fauci has discovered that such politics make him the feted darling of the Illiberal Left media. This is why he only condemns actions of ordinary private citizens just trying to live their lives and survive while giving dog whistle approval to all the Antifa / BLM violence -- and, by extension and implication, their mass gatherings.


As for Jim Jordan, I really appreciate the fact that this former collegiate wrestling coach has the mind and wherewithal to go at it like a member of the British parliament during Prime Minister's Questions ("Question Time"). 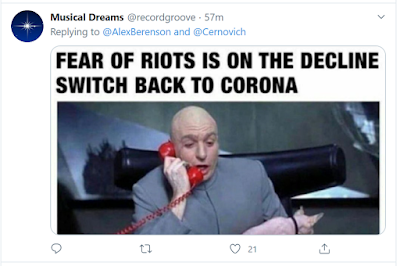 
OK, I'm going to wrap up this entry. To be clear, this was not the entry I had intended to post. Rather, I was going to repost in full this National Review online piece by Victor Davis Hanson -- Our Summer of Cultural Suicide -- broken up with the bulk of yesterday's pictures.
That will have to wait. 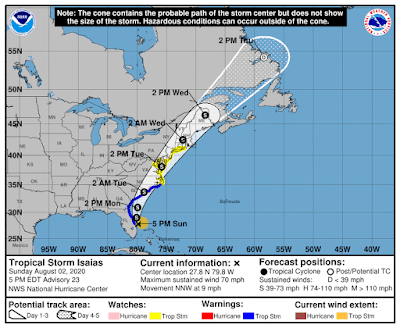 
Given the impending weather situation with what now looks like will be very rainy and possibly very windy strike by Tropical Storm Isaias on the Mid-Atlantic to include even here in the Metro D.C. area, I will try to post an entry on that topic later tonight.


The system's has a circulation that is considerably offset from its main convective activity. However, this is expected to change as the large amount of shear that disrupted the storm relaxes and the system begins to accelerate toward the upper South Carolina coastline.

SE CONUS sector base reflectivity radar mosaic,
looped 1918 - 2028 UTC 02 August 2020
Conditions are not that bad along the Florida Atlantic coastline. There were wind gusts of 30 to 35 mph and some squally showers but that was about the extent of it -- despite the fact the nominal center of circulation came within 70 miles of the coastline.
*******


The storm is anticipated to come ashore at tropical storm or no more than minimal hurricane strength somewhere along the South Carolina coastline and follow a north-northeasterly track into our region. 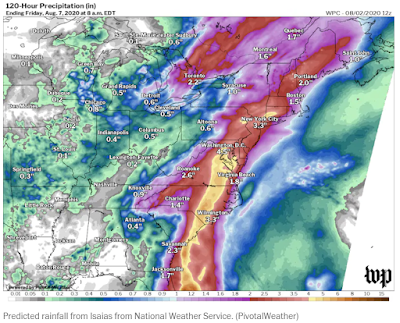 NWS/NCEP/WPC 120-hour quantitative precipitation forecast (QPF) for a portion of the eastern United States, as repacked by PivotWeather.com

Rainfall totals of 4+ inches are possible and there are already widespread flash flood watches in effect (see QPF map above and NWS weather advisories map directly below). 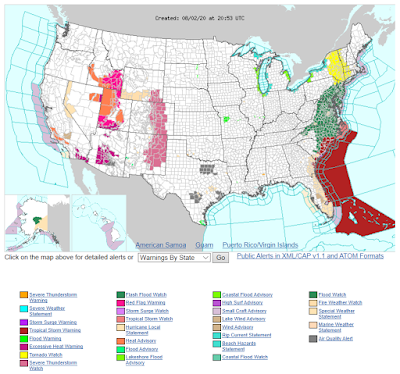 
What's more, Gary is thinking of taking a drive to the Delmarva, specifically, to the Atlantic seashore, and I would join him. Again, I'll write more about this later tonight. Right now, I'm supposed to go to Fred & Doug's Sunday night soiree, although A. is away this week.
--Regulus
Posted by Regulus at 5:49 PM