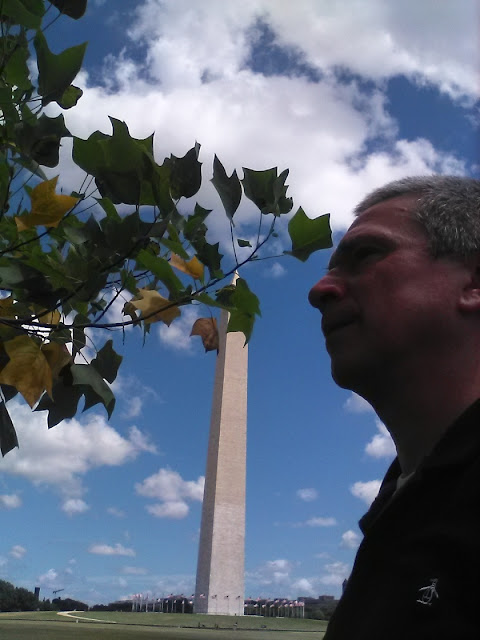 
The outdoors-in-D.C. pictures in this entry were taken by me on sundry days this month -- including when walking to the office -- are topically unrelated to the posting and instead are just to break up the text in places where I don't have enough related imagery. They are not captioned but the file names contain time and place information. 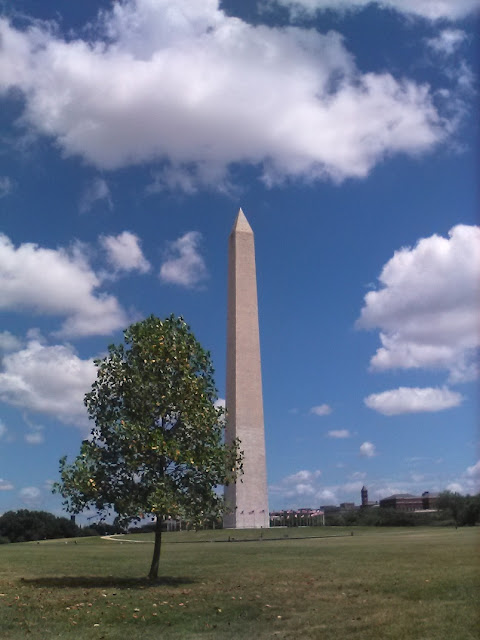 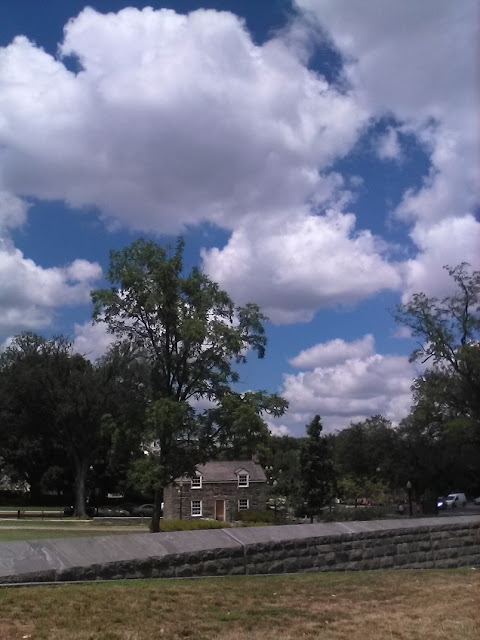 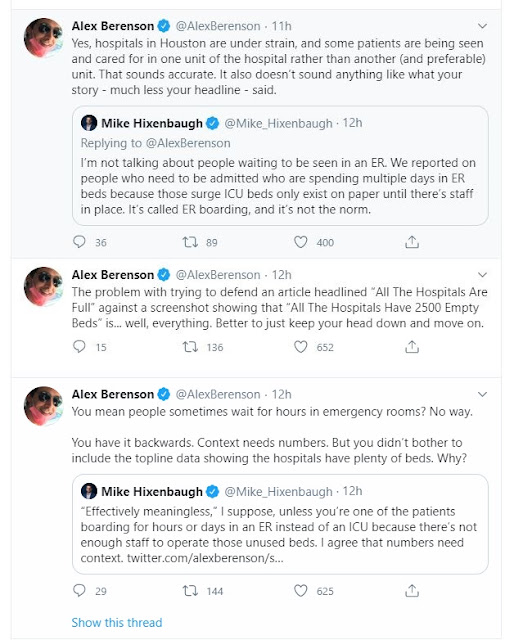 Above is brilliant exchange between Alex Berenson, July 15, 2020 (read the bottom exchange first). It also shows how Twitter, in rare circumstances through the ocean of garbage, can have societal value.
To be clear, Mike Hixenbaugh is the Texas-based NBC reporter who wrote one of the pieces about how Southeast Texas hospitals were completely at capacity and everyone was about to die. 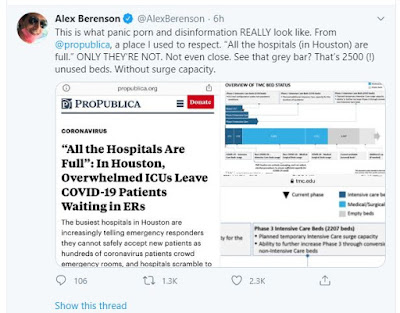 As a former New York Times reporter with a wide Twitter following, Berenson attracts elite media attention -- and rage because he is functionally a traitor to his class with their Destroy-Trump-By-All-Means-Necessary monomania. 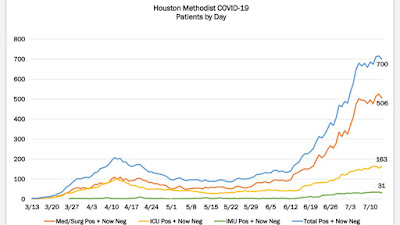 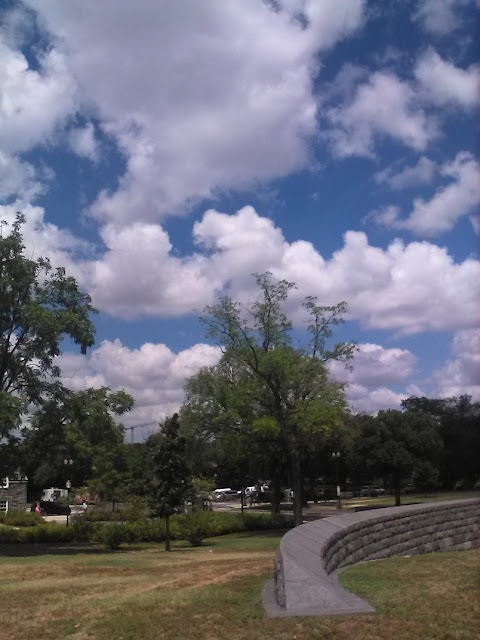 Returning to the issue at hand for this entry, remember that Southeastern Texas, like South Florida and parts of Southern California, are the "Ground Zeros" of the current spike in infections -- except in all three cases, the mortality rate is about less than one-tenth what it was in New York City in April and May. 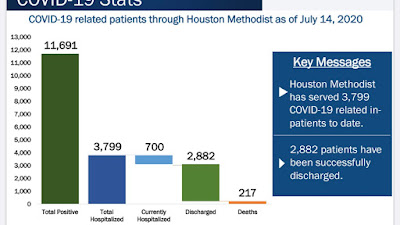 Bar chart with key messages for the Covid-19 situation in the Houston Methodist hospital system as of July 14, 2020


Let me say upfront that none of this information will make the slightest difference to what Berenson calls "Team Apocalypse," by which I personally mean the mainstream media. 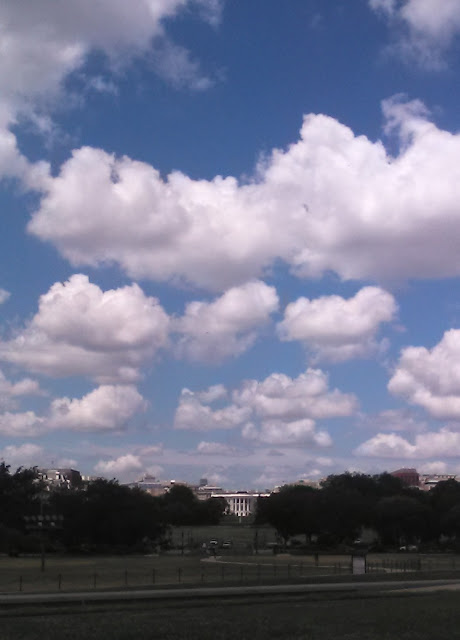 The whore media is fanatically fixated on a meta-narrative whereby Covid-19 is Bubonic Plague revisited. It pushes the deranged ideology that only the complete destruction of the Trump presidency in the upcoming election can resolve the issue. Ditto the destruction of the larger Republican Party and the 40 to 45 percent of the country it represents. And the obliteration American history and replaces it with some lunatic WOKE Marxist-Leninist dictatorship. As Matt Taibbi noted, it's a catastrophic message failure that changed the narrative from America-Is-The-Best to America-Must-Be-Destroyed. 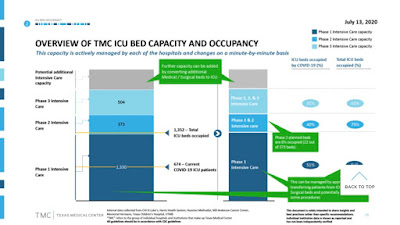 
Nor will it matter at all to the shitty big Blue State governors such as Gavin Hair Gel Newsom or Creepy Cuomo (he of the mass nursing home death "policy" in April). Ditto the worthless big Blue City mayors -- New York, Chicago, Los Angeles, Houston, Atlanta, D.C., or Boston. 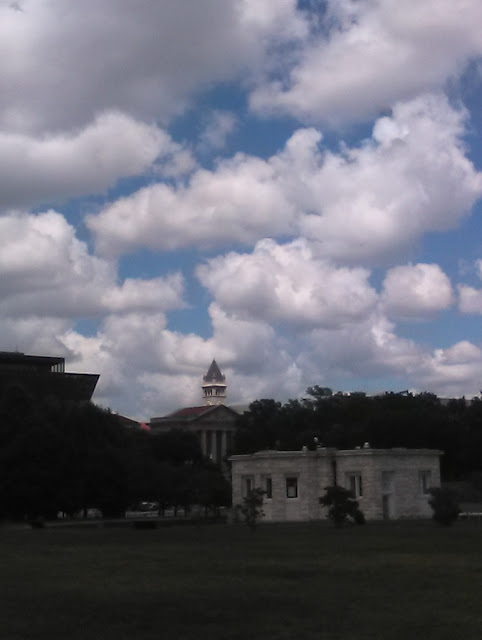 These pols have discovered the orgiastic arousal they can obtain via their realization that they can by fiat shutdown society for days and weeks on end -- upending lives in ways savagely disproportionate to the situation to include the CFR / IFR -- and thus have found a Mack truck-sized hole through which they can shred the Constitution and do as they please. 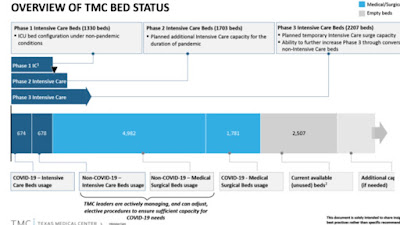 
It's as though they've all discovered of a sudden that they have the power to fly and cloak themselves in invisibility. It's a power during this culturally malevolent period of WOKE Cultural Revolution that they will exploit to the hilt unless stopped by the state or federal courts, something that hasn't really happened (yet) in earnest. (The hope lies in the federal judiciary, not mau-maued state judges.) 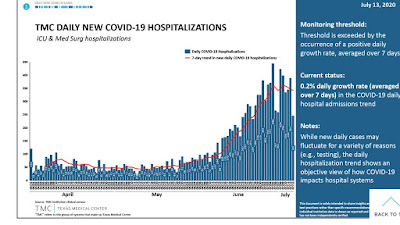 
Indeed, maximal lockdowns and all the personal and social destruction and ruination it causes is great by them despite the fact that for a large majority of the population by age and health, Covid-19 has a lethality no worse and quite possibly lower than a seasonal influenza. 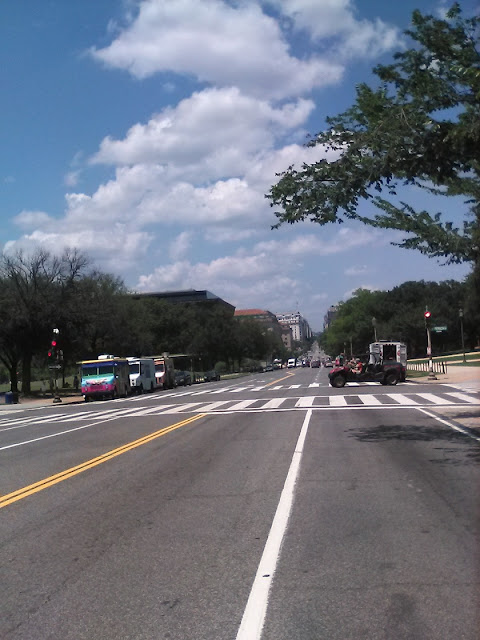 Arguably, that segment of the population arguably OUGHT to get herd immunity as quickly as possible since that is precisely what safeguards vulnerable populations in the long run much more effectively than never-ending spasmodic fits and starts, shutdowns and reopening. 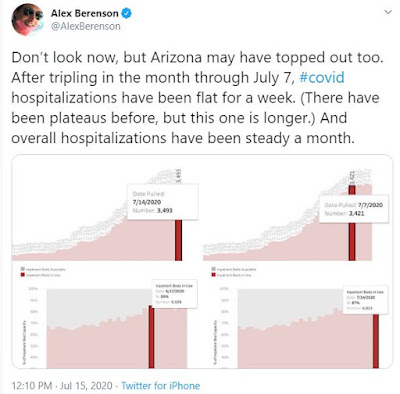 
And if you are horrified by that idea, keep in mind that this is what is effectively happening anyway in the United States -- and is happening in many places. Where it is not happening, that's only through an endless cycle of lockdowns-at-gunpoint as happened in China and is now happening in a velvet-covered fist sort of way in New Zealand with its isolation units and in Australia with police turning random residential structures into prisons.

But back to my political commentary ... Why to Democratic politicians want this? Because it opens the door to endless government dependence for the totality of your existence.
Their true stripes are revealed in that they are openly encouraging all the Antifa / BLM mayhem, rioting, and looting while simultaneously demanding everyone else cower behind masks or burrowed underground in perpetuity. 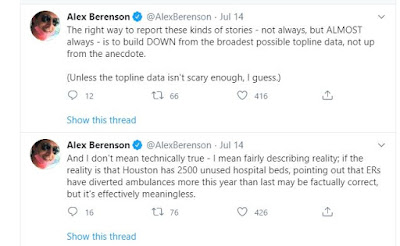 Above: These two Alex Berenson tweets provide a wise insight into how data-driven journalism should work. If we had a sane and functional media in the United States, this is a precept by which it would live.
*******


One thing that I am so abso-fucking-lutely sick of are the "crybully" WOKE media whores -- typically, ass-hat Millennials -- who write these stories that go as follows: Some Republican or other Thought Criminal says or does something that goes against the suffocating WOKE sensibilities and, in response, this or that Democratic pol, CNN or other whore, a liberal Hollywood celebrity, or just random ass-wipes among the phalanxes of Twitter mobs in the role as Year Zero shock troops -- respond. 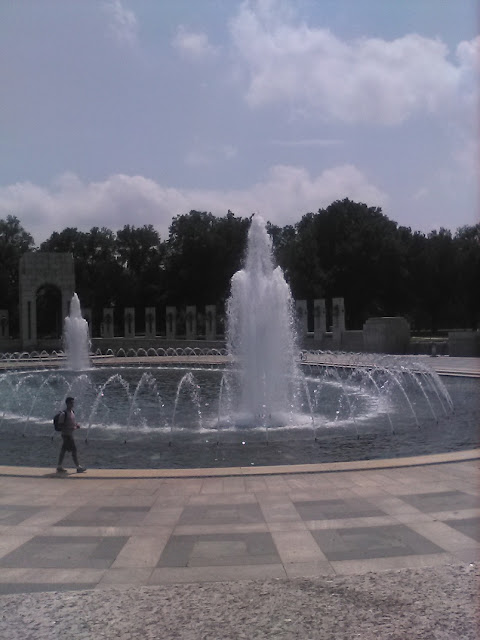 But the response is never "disagreed with" but always "slammed," "schooled," "took down," "crushed," "tore apart," or whatever the fucking action phrase is -- and how that response has always "gone viral" in the Great WOKE Circle Jerk that is Twitter. 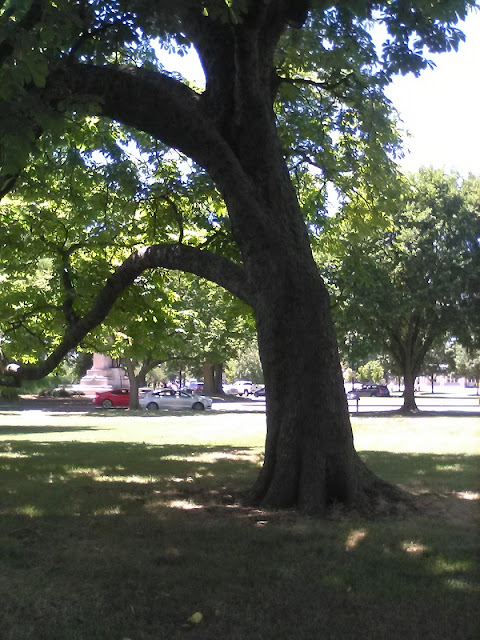 At the rate of hyper-testing now occurring -- a rate nearing 1M per day, but some of which seems suspect -- the entire population will theoretically have been tested within 12 months, at which point, presumably, the shit starts over again. 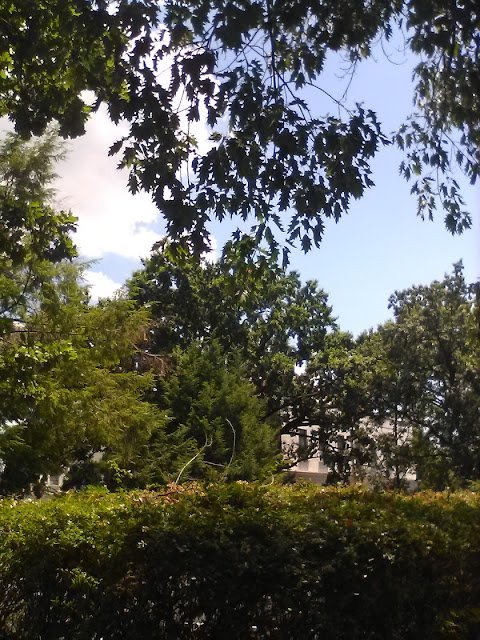 Remember: This Covid-19 hysteria may actually never end, at least not for several years. And in the short-to-medium term, it is precisely an instrument of amassing power by bulldozing away all opposition and bringing about their identity politics-fixated WOKE dystopia where total dependence on the government is the only way to survive. 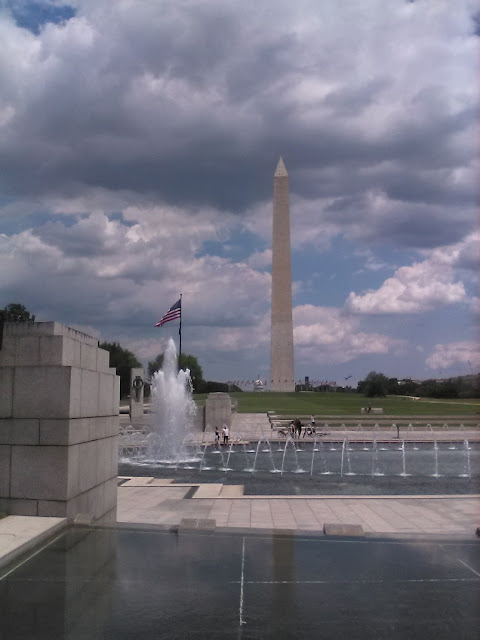 To me, the mask fetish -- which is being pushed HARD now -- has less to do with any questionable "NPI" value it may have and instead is a form of virtue signaling -- or perhaps I should say, supplication before the weird sharia-like law that mask-wearing and WOKENESS embody.
And, no, you can't separate these issues.
Anyway, I've been updating my spreadsheet -- adding more daily numbers, ratios, and individual worksheets. 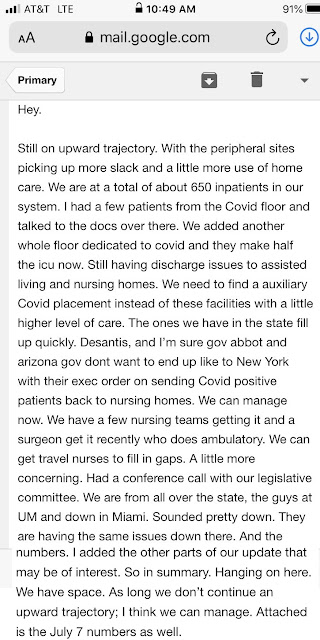 
For the whole pandemic back to March 13, the total number of cases, deaths, and the resulting national ratio are as follows:

At this point, the 3.87% figure is based on a big enough population over a long time enough that we could call it provisional Case Fatality Ratio (CFR), except for one unpleasant matter ...

As I calculated, the monthly CFR for New York was a mind-boggling 9.02% in April and 8.51% in May. (New Jersey's CFR was also high, but I haven't calculated it yet.) Given the total number of cases and deaths in New York (and New Jersey), this is why the national CFR is still about 4%.


The CFR continues to gradually fall. It should, given enough time, reach the broader Infection Fatality Ratio (IFR). which the CDC presently pegs at 0.65%. (Florida's ratio has been consistently in that ballpark.)
Further confounding this, though, is that any viral disease's CFR and IFR change over time as the lethality of the virus changes (typically, it lessens and the CFR and IFR drop). 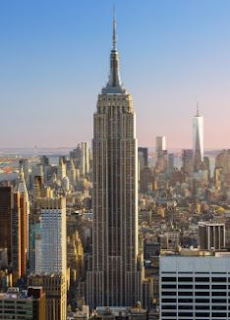 As for why the New York CFR was so appalling high, it was due, in no small part, to Gov Creepy Cuomo decision to warehouse elderly Covid-19 patients in nursing homes in order to keep hospitals from over-flowing capacity.

Whether necessary is a topic for another time, but Gov. Creepy has been busy whitewashing the matter anyway. 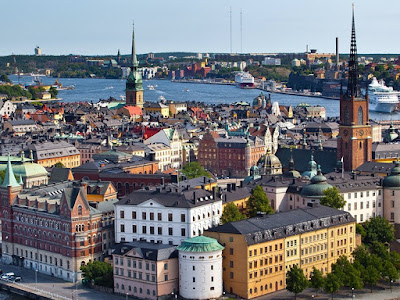 Oh, and just for morbid fun, let's look at the situation in Sweden, where they did a herd immunity, here are the numbers: 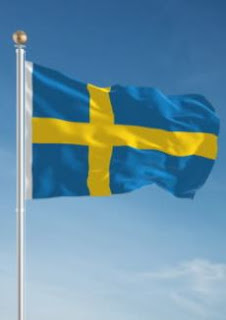 Yes, much to CNN's bitter chagrin, Sweden is not an post-apocalyptic wasteland.

Let me be clear: Covid-19 is a very real danger to elderly and/or people with certain health issues.


However, the rare and unusual exceptions to this rule notwithstanding, it is simply NOT dangerous to people under 45, nor to healthy people. And obliterating society in open-ended shutdowns as a solution is no solution.
But as Laura Ingraham pointed out on her "The Angle" commentary last night (see above), the CDC noted that there were 166 influenza-related deaths in the 2019 - 2020 season for children under 17 in the United States. By contrast, there have been so far 30 Covid-19-related deaths for children under 15 in the United States.
What's more, of the 8.9 million school children (i.e., under 18 years of age) in California, precisely ZERO have succumbed to Covid-19. 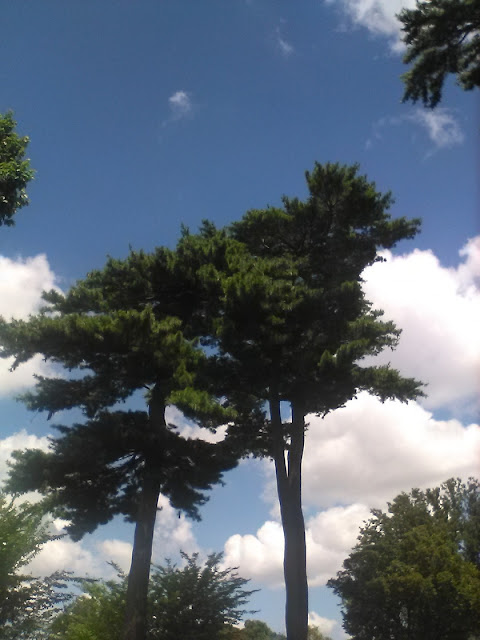 That German study also fairly convincingly shows that children are not at risk for Covid-19. Nor was there any evidence that they were particularly risk transmitters, but that, of course, also has to take into account any sensitive family members like elderly grandparents. 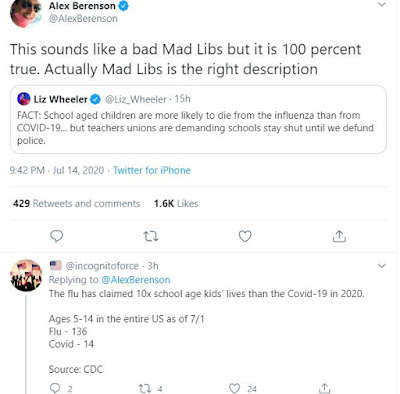 Of course, teachers unions -- now busy demanding "Defund the Police" and "Medicare for All" and whatever other crap comes out of "The Squad's" collective mouth -- are point-blank refusing to teach in person unless they have hazmat suits. 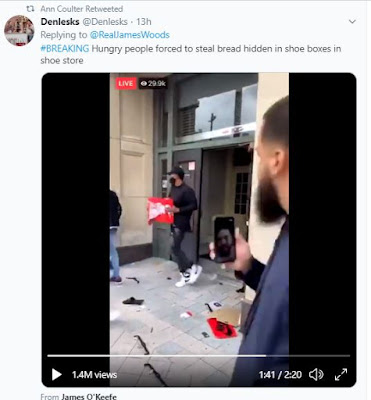 Expect more and more of these kinds of scenes as America breaks down -- until some authoritarian regime arises to restore order from violent chaos
But not to worry: We'll all be properly masked.
*********


And this brings us back to the real Democratic Party plan in all of this: Endless shutdowns, Antifa rioting, BLM Mogadishu-style Warlordism, Cultural Marxist Revolutions obliterating any functional and rational country, and a dystopian, highly illiberal Sharia-style WOKE identity politics with the world run by an indeterminate, tweaked-out, violence-prone trans-whatever ...

Forever.
And on that note, I'll end this entry, except for this one last image ... 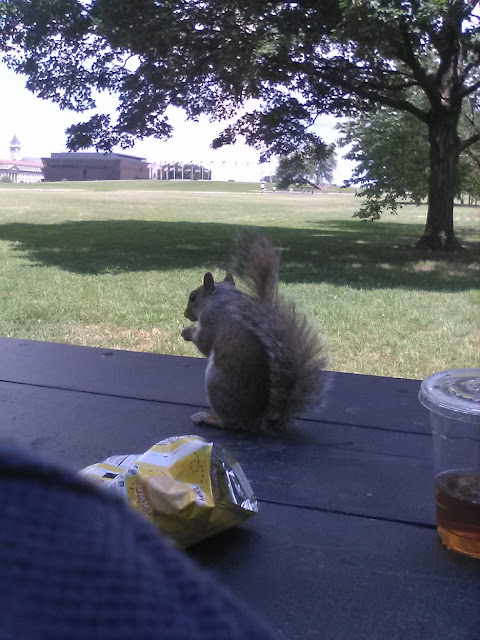 Above: This was one of two squirrels that I gave some potato chips on my walk into the office as I stopped at a picnic bench under some trees near the Washington Monument (the base of which is visible in the background, except the color saturation of the image is such that the sky blanched out, so you can't quite tell what's what). At one point, this squirrel scurried onto the table and took a potato chip out of the bad. I was turned away -- as I didn't want to startle it -- and took the picture over my shoulder.
--Regulus
Posted by Regulus at 3:48 AM