More Riotous Misadventures In Self-Righteous Media Folk Seeking WOKE Apotheosis -OR- The Case Against Encouraging Rioters and Engaging in Riots, No Matter the Stated Purpose 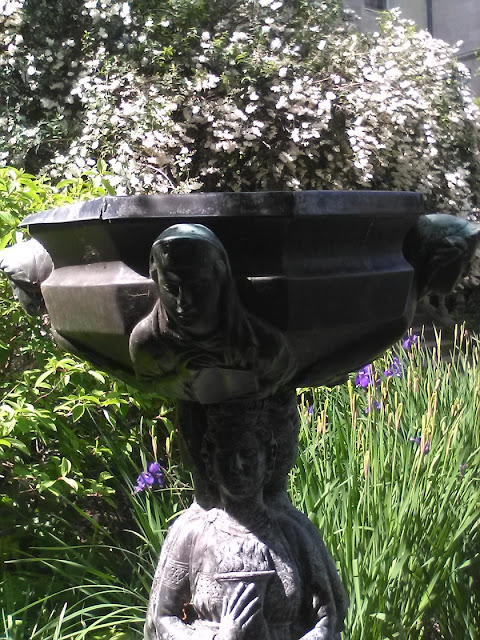 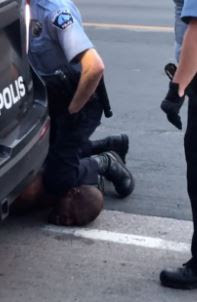 We're nearly a week into the nationwide spasms of urban violence sparked by the video-taped gruesome, outright horrific, and clearly criminal killing of an already-subdued black man, George Floyd, on May 25th by a now-fired and arrested white Minneapolis police officer while others casually watched.

At left is an image from what was captured on video. No, I haven't watched nor and can I watch the video.


The violence but now spread far beyond that with all sorts of actors engaged in actions -- a lot of it peaceful, more than a little smash-and-grab violent and destructive by professional agitators and provocateurs as much as any street-level criminals. The protests and violence are such that the two seem problematically intractably entangled, triggering an escalating militarized response. 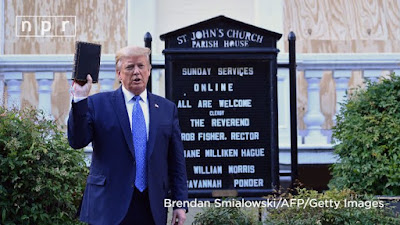 Wow. Just wow.
This picture was taken in front of St. John's Episcopal Church across the street of Lafayette Square and which was damaged in a fire set by marauding mobs the other night. It and the one below were taken at the end of a curious show of force that allowed Trump to stand in front of the church holding up a Bible. 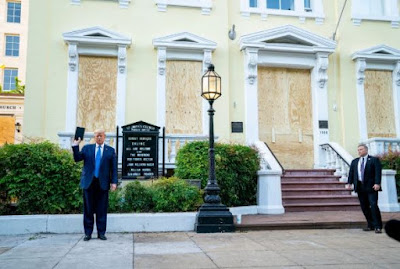 It was a show of force deeply and flamboyantly incendiary to most D.C. residents since it basically involved Trump doing a sort of weird reality show version of a danse macabre through the forcibly cleared out park to the aforementioned church. 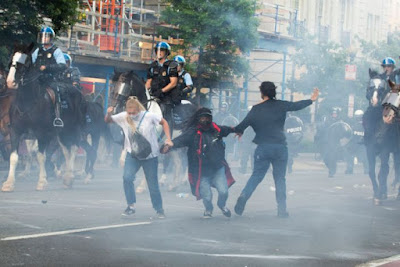 Federal forces including those on horseback and using teargas, rubber bullets, and those flash-bang explosive devices forcibly clear H Street by Lafayette Square, June 1, 2020
This was not the regular MPD but National Guard units, U.S. Park Police, and the Secret Service.
*******


Needless to say, the Washington Post literally freaked out at this, judging by its online front page tonight and all its reporters and pundits -- and tens of thousands of angry online comments. The Mayor and the City Council also chimed in but they have no authority to do anything when its federal forces like this. 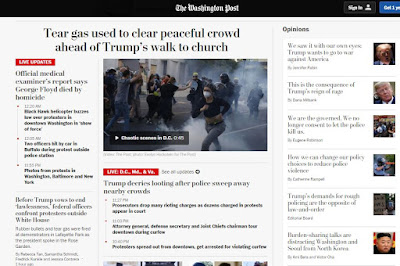 On the other hand, and from a less D.C. locally popular and -- yes -- less WOKE perspective, this show of force occurred following three nights of smash-and-grab vandalism, looting, and setting of fires to include businesses on downtown streets a short distance from the White House complex -- to mention just 20 minutes before D.C. Mayor Muriel Bowser's own 7 p.m. curfew was to take affect. It's also part of a broader strategy to deploy more U.S. military assets around the country to quell the unrest. 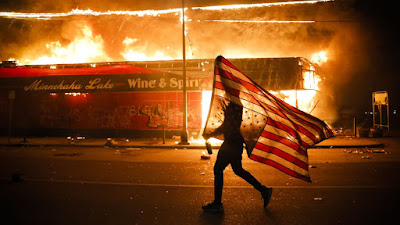 And, let's face it: These daytime peaceful rallies with the drums, chants, joints, beads, and braids among the 20-something young Millennial and early Gen Z set are often just a hair-trigger and a setting Sun away from "flash mob" nighttime mayhem. 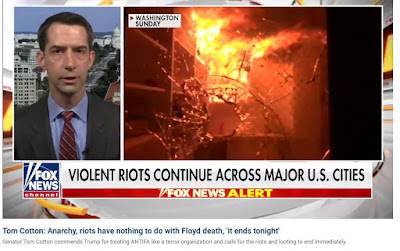 A glowering-faced Sen. Tom Cotton was on Fox & Friends on Monday morning (see above image) urging Trump to do this very thing -- declaring that the U.S. military needs to be called in to quell the nationwide spasms of violence, which he said are being orchestrated by anarchists and Antifa types. 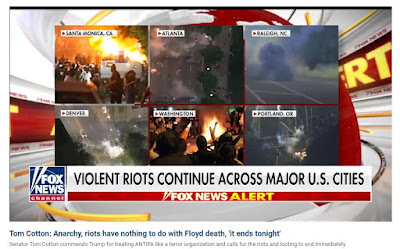 Cotton also tweeted out the following, which Trump then retweeted, and which I think is worth reposting here for the record since it is so brutal, straightforward, and, well, spot-on in its logic. 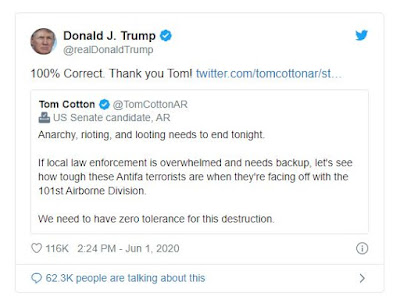 Oh, and all of this is occurring during what is nominally an open-ended quasi-pandemic with associated open-ended society-wide "social distancing" shutdown -- now finally fraying / ending -- and economic depression. I think we can all agree that we're getting tired of Covid-19. 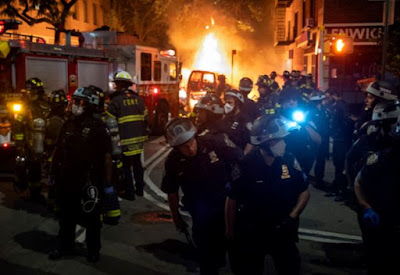 That aside, my interest is still on the issue of the effectiveness or, rather, politically self-destructiveness of rioting, looting, and generalized mayhem. This requires turning away from the perspective of the mainstream media's phalanxes of preening, self-righteous, oh-so-WOKE SJW reporters and sundry commentators, electronic print and on TV. 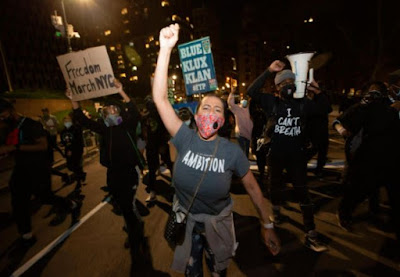 Instead, I point you to an alternative source, specifically, an excellent piece by National Review's Kyle Smith [link embedded]: This Is Easy: Don’t Excuse, Defend, or Encourage Rioters. It's worth a full reposting, but I'll just leave it at the link. 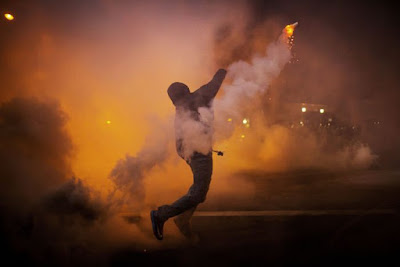 
I'd also like to link to this Ross Douthat New York Times op-ed piece on May 30th (online) / May 31st (print edition): The Case Against Riots. It includes references to Princeton political scientist Omar Wasow's 2015 work on how civil rights era protests to include violence and riots in the period 1960 - 1972 impacted public opinion and voting, a topic that Jonathan Chait addressed at the time here. 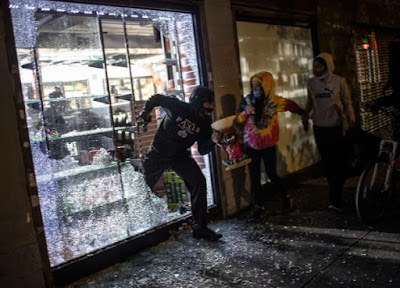 
Regarding the Douthat piece, I'd like to quote this part (which includes a link to the above Kyle Smith piece):
Meanwhile Joe Biden, as a moderate Democrat with a law-and-order past who won his party’s nomination with strong African-American support, is arguably better positioned than some Democratic politicians to balance outrage over racial injustice with a message of peace, nonviolence, calm. 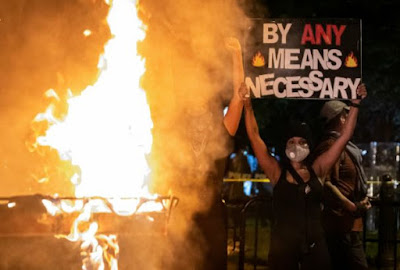 Biden probably won’t go to war with the parts of his coalition that are inclined to portray riots as necessary uprisings or cathartic wealth-redistribution, but he has a primary season’s worth of experience ignoring them. So if Minneapolis is the beginning of a season of protest, he may find it much easier to balance moral outrage with reassurance than a nominee more beholden to the left. 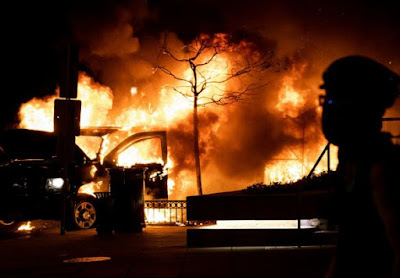 And in striking that balance he would carry on, rather than betray, the legacy of the most successful civil rights activists. Martin Luther King Jr. became more politically radical in his last years, but his opposition to rioting was a constant. “Every time a riot develops,” he warned just months before his death, “it helps George Wallace.” 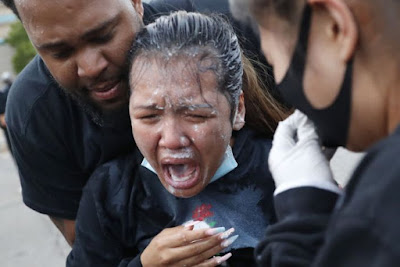 If we are headed for a long, hot, virus-shadowed summer, those are words that a liberalism that doesn’t want to help Donald Trump would do well to keep in mind.
******* 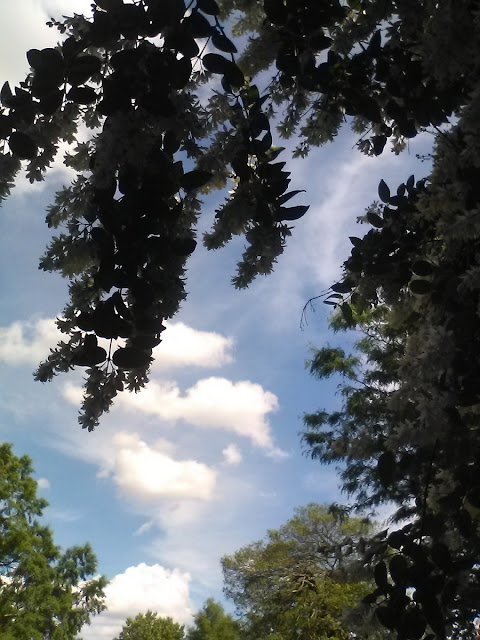 
OK, and I think that's all for now. Honestly, I wasn't going to write an entry tonight, but the situation seemed to warrant it.
--Regulus
Posted by Regulus at 3:00 AM