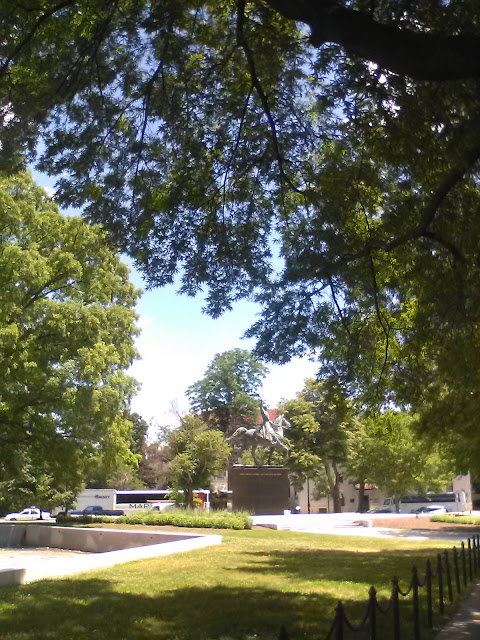 
This entry contains pictures that I took on Monday (June 1st) and Wednesday (June 3rd) on my afternoon walks from my apartment near Dupont Circle / Embassy Row to my office at L'Enfant Plaza and a few while walking back from the Farragut West Metro on June 2nd (Tuesday). They are NOT topically-related to the entry, but intended to be pretty and a sort of counterpoint. 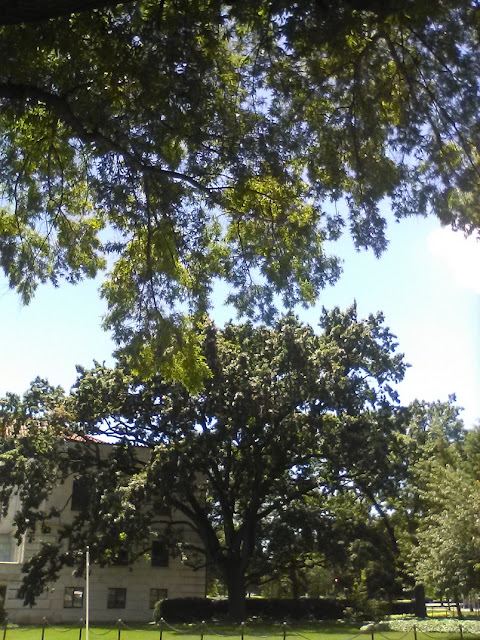 Recall that I've been doing that walk on most weekdays for the past 2-1/2 months (and taking the Metro when returning home). Except for the lead one, I am not captioning them, but the file name contains location / time info. 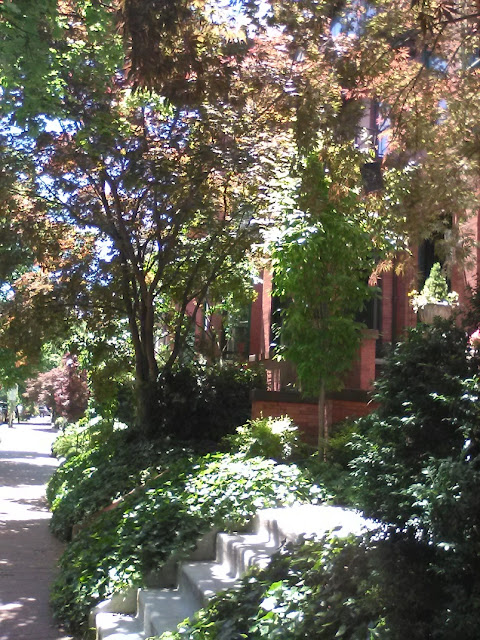 It's Wednesday late night -- well, Thursday morning by the time I post this -- and I'm home in my small but carpeted, lamplit apartment with the window air conditioner humming away. Given the 11 p.m. city-wide curfew and the Covid-19-related closures, it's really not that surprising that I am home. 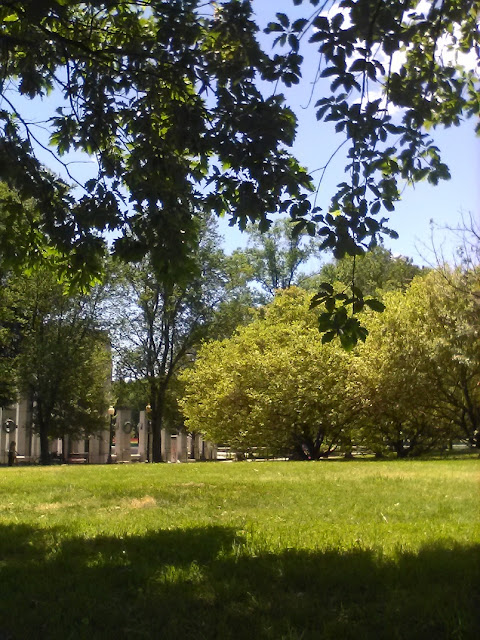 I'm watching my nighttime medley of old TV shows on the trio of digital channels I get (MeTV, Antenna TV, and Cozi TV) from my cable-less television set up.

I skip some of these to watch others depending on the episodes and how I feel. 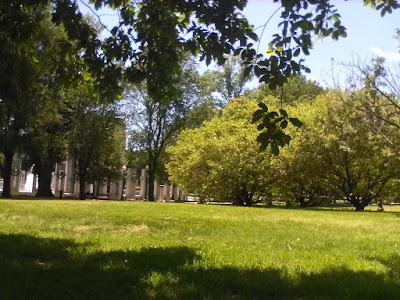 As you know if you've read this blog at all over the past nearly three months, these old TV shows are my nighttime escape from the troubled time it has been -- first with the ongoing Covid-19 situation with massive, extended shutdowns and flash economic depression, an now all the race-based civil unrest in cities across the United States. 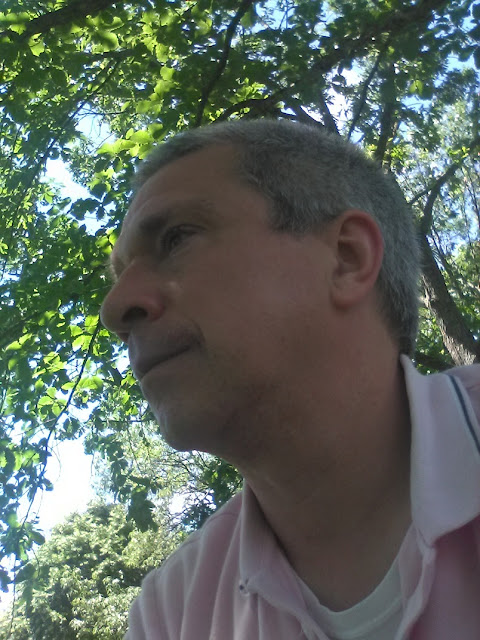 On the economic depression matter, the second quarter GDP is going to be something out of a doomsday fiction movie, but it should recover significantly by 2021. The stock market's behavior seems to suggest that.

It was a hottish, humid day with highs in the 90s Fahrenheit -- the first such occurrence "officially" this season at the three airports to include 93°F at KDCA, 96°F at KBWI, and 95°F at KIAD.

The Dulles reading set a daily record -- easily surpassing the 89F daily record set both in 1980 and 2010. (Remember that KIAD's records only go back to 1960 versus 1870 with a pre-airport period for the other two.)

That this occurred on June 3rd is rather late in the warm season and followed a cool, pleasantly, and sufficiently rainy spring to make it vibrantly green and extended flowery.

Indeed, it majorly compensated for such a troubled time.

Daytime humidity levels were moderate with dew points around 65°F and an occasionally gusty (20+ mph) southwesterly breeze. Tonight is a warm and thickly humid on with dew points nearing 70°F.

We need some rain. Tomorrow afternoon and tomorrow night features a decent chance of showers and thunderstorms -- put at 60% chance.

Oh, yes, the KDMH (Maryland Science Center ASOS) has gone offline for an unspecified duration owing to unspecified "construction" around it at Rash Park.

Rash Indeed. My hunch is it never goes back online. But at least we have the KNAK spot (Annapolis Naval Academy ASOS).


As an update, on Wednesday, I walked to the office at L'Enfant Plaza from my apartment near Dupont Circle / Embassy Row. However, today I went on a slightly different route in order to avoid any of the militarized presence in the blocks around the White House including lots of Humvees. 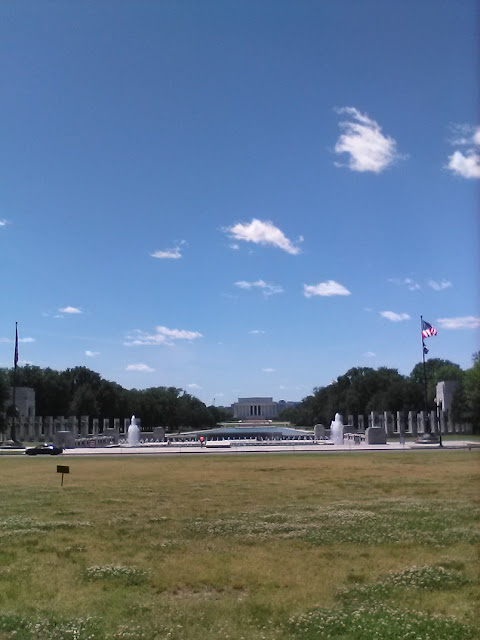 About that, I'm actually quite glad that Trump called in such a heavy National Guard presence and even threatened to bring in regular military to quell all the mayhem -- not just here in D.C. but in cities across the country. Long story short, and despite all the media and left illiberal yowling, it seems to be working. 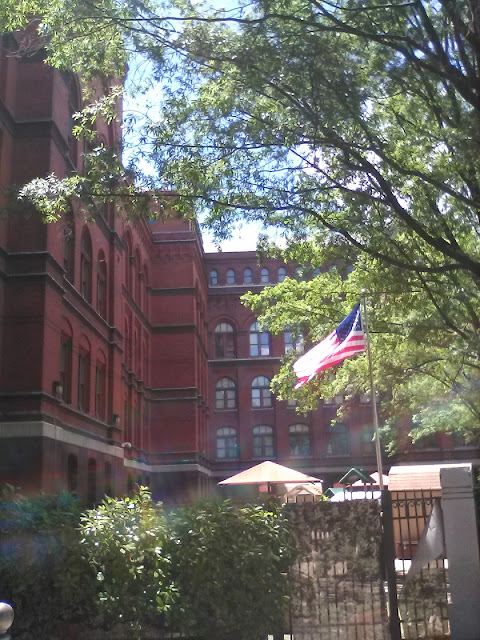 As for here in the District of Columbia, initially, 1,300 D.C. National Guard soldiers and airmen plus others from Utah and New Jersey were deployed on Monday. Additional National Guard units arrived on Tuesday and Wednesday from states such as Indiana, South Carolina, Tennessee, and Maryland with the total reaching 3,600 and possibly more to come. 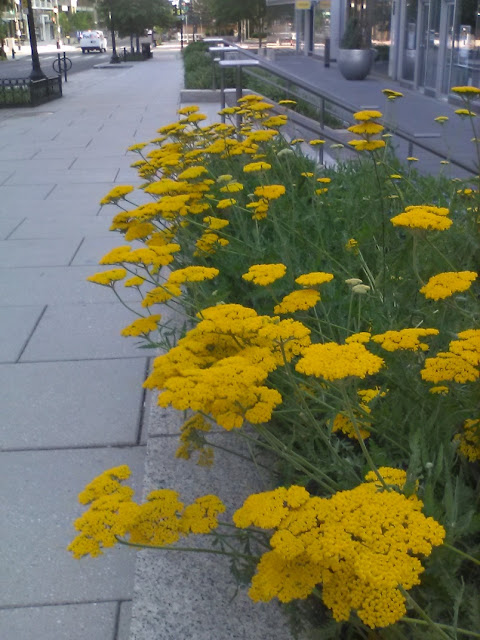 This pic was taken looking south on 19th Street toward M Street on June 2nd. Unsure what kind of flower this is -- possibly achillea millefolium yellow?
*******


In terms of the controversial deployment of active duty regular military, that happened in New York City but not here in D.C., although such troops are "postured" on military bases in the National Capital Region. 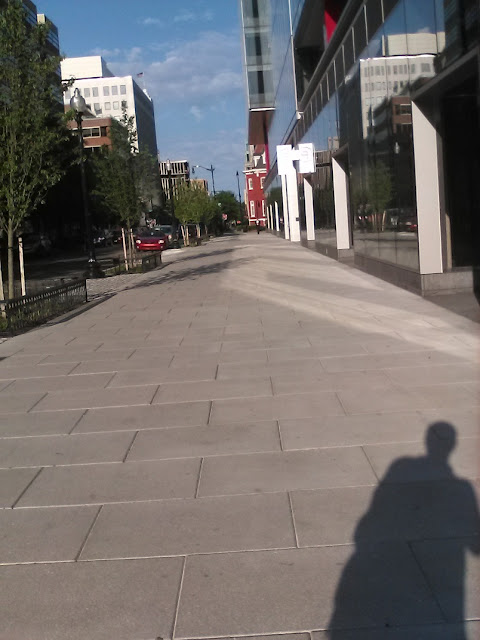 This has all transpired irrespective of whether Madam Mayor Muriel gave her WOKE approval. Madam Mayor seemed less-than-outraged by the rioting, looting, and mayhem taking place by agitators and anarchists and exacerbated by garden variety urban street criminals piggybacking off and, to some extent, have been intractably intertwined with the larger, relatively peaceful, and understandable protests around the country. Those protests, of course, have been in response to the brutal and brutally casual killing of George Floyd by those white Minneapolis police officers on May 25th. All of them now are facing charges with the main guy (Derek Chauvin) having his charges upped to 2nd degree murder. 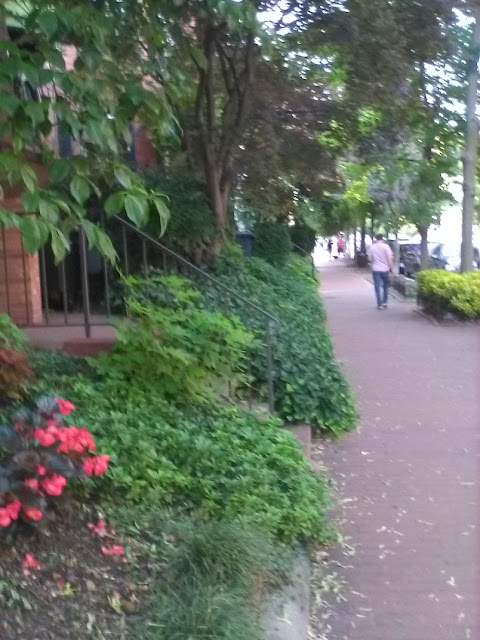 This deployment has occurred over the hysterical objections of the phalanxes of WOKE reporters and/or opinion writers from the Washington Post and New York Times, not to mention CNN, MSNBC, Salon, Slate, Vox, and The Atlantic, in particular, the white female staff from those publications and sites who are actively celebrating the mayhem as somehow valid, legitimate, and bringing society to some better state. 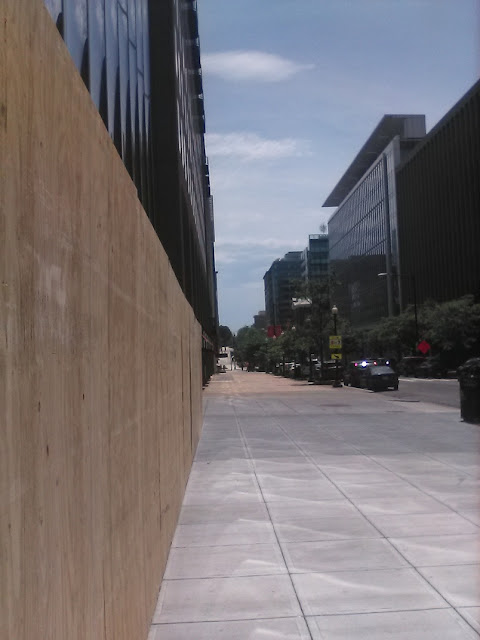 They even welcome the appropriate use of signs in windows "AFRICAN AMERICAN OWNED AN OPERATED," as if destroying everything around said business will somehow cause a justice, socially democratic, and color-blind society of equal opportunity to arise, assuming that's what they actually want. 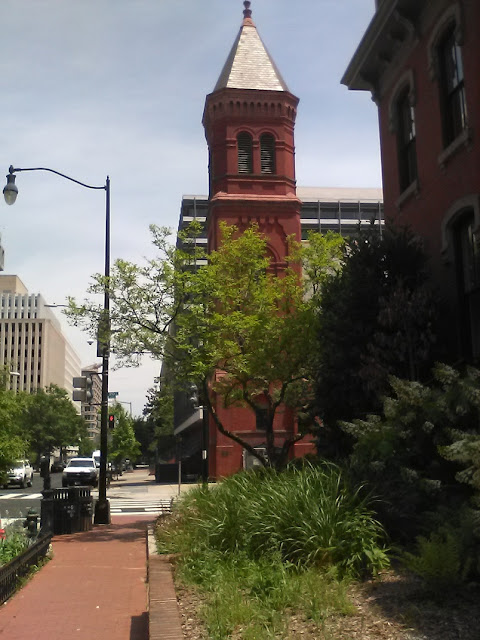 On a personal note, I can say that here in D.C., numerous glass storefronts have been covered in sheets of plywood by business owners and/or managers. I guess unlike Miss Teaism lady, they aren't WOKE enough to want to welcome the destruction of their livelihoods and then, perhaps, "crowd-sourcing" a GoFundMe recovery fund. 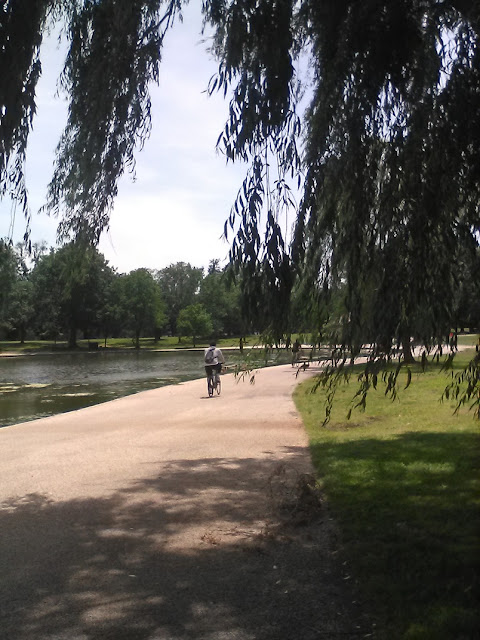 Now if you do it that way, on what schedule are you supposed to welcome the next flash mob's ransacking / looting and burning? Anna North, Emily Stewart, Amanda Mull, Ashley Feinberg, and Julia Craven need to know. Who would you like to "vaporize" today, ladies? 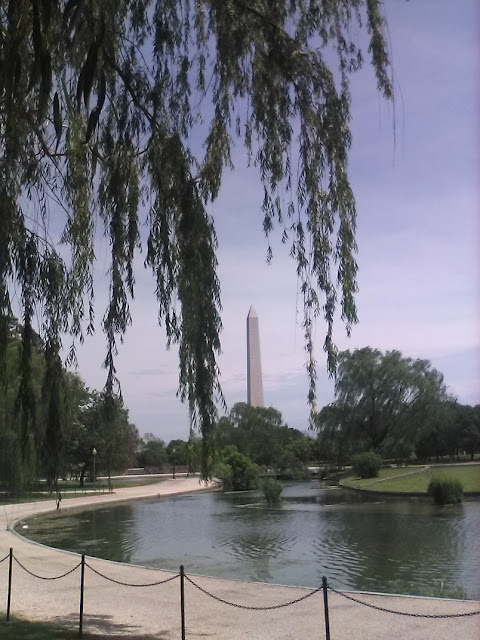 It's like a totalitarian female (correct pronoun usage or microaggression??) Thought Police phalanx, but are they from the Ministry of Truth or the Ministry of Love? Whatever the case, they'll certainly need to check in with Keeanga-Yamahtta Taylor for her input.
To be clear, the male writers at these publications are the same in terms of wildly illiberal WOKE Hive-Think. 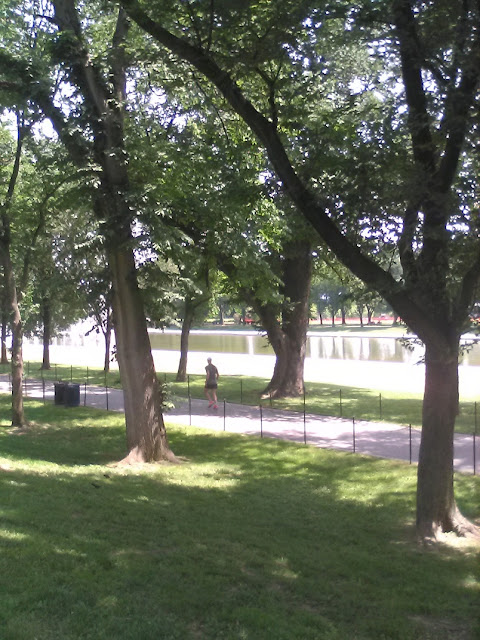 How funny ironic it is, though: First, the Covid-19 situation's face mask wearing morphed into a bizarre iteration of America's never ending culture wars -- and did so even before the pandemic had peaked and started on a gradual, irregular decline. Then, because of the mayhem with looting and vandalism, we have "masking" of buildings behind plyboard to safeguard the businesses and even the physical structures. How fucking ironic is history?? 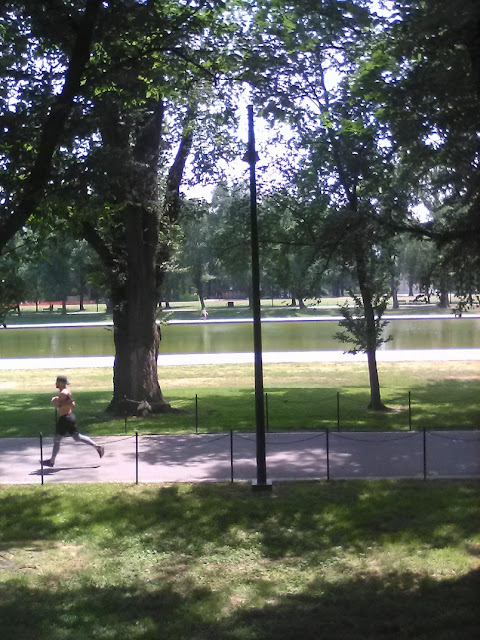 If I can tie this into my personal update, as noted, it was a sunny, rather warm, and humid day but breezy. On my walk, I made it to Constitution Gardens at 20th St and Constitution Ave and then walked around the World War II Memorial. It was there that I saw at least twenty National Guardsmen -- mostly men -- just sort of relaxing around the WWII Memorial to include sitting in the shady area near the Pacific "triumphal arch" side. 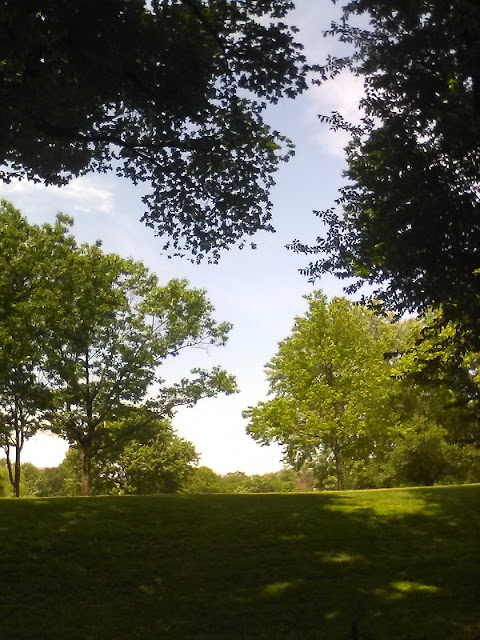 After my mid-to-late afternoon in the office, I took the Metro from L'Enfant Plaza to Foggy Bottom to go grocery shopping at Whole Foods. But once again, the store had arbitrarily changed its hours -- and this time, closing well before the 11 p.m. curfew. Instead, it was just some jackass guy standing with his back to the glass doors pretending not to hear people tapping.
That's a shitty way to treat customers. 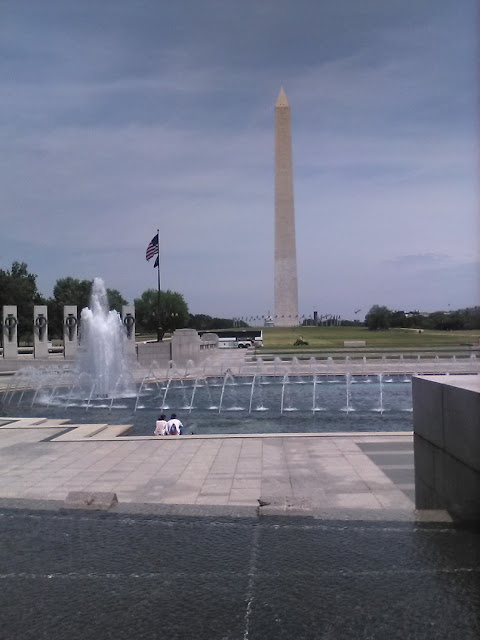 The other market -- upscale but well-stocked Streets Market on 22nd Street -- on my walk home was open, so I stopped there. Yesterday, I went to the Safeway on 17th Street to stock up on more basic stuff. 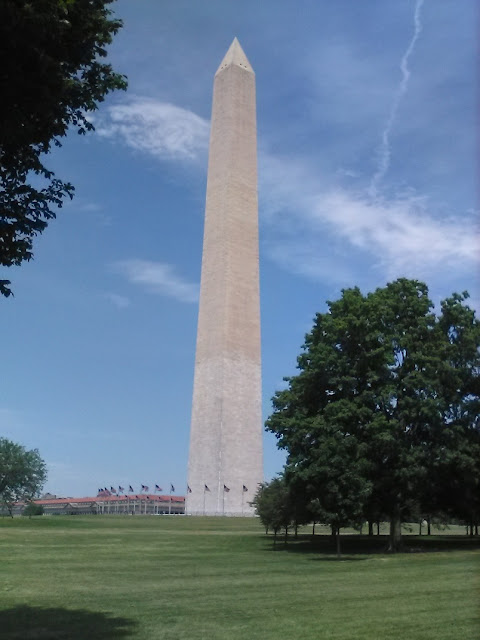 Alright, that's all for now. I'm going to sign off. My next planned entry will be on Friday night.
--Regulus
Posted by Regulus at 3:30 AM