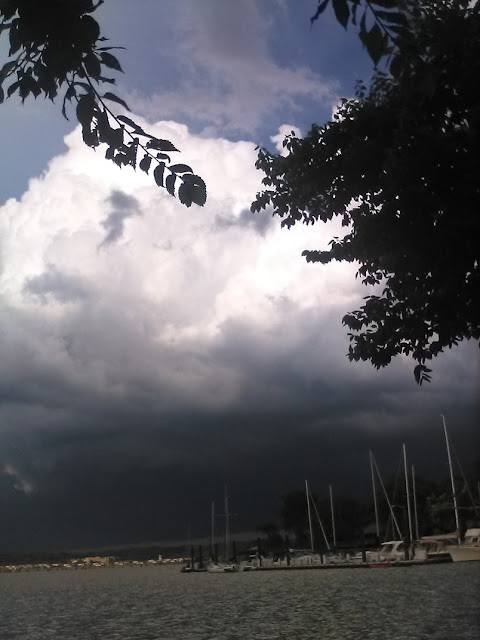 Dramatically ominous-looking towering cumulus (storm) clouds as seen from Daingerfield Island marina, Alexandria, Va., 7:13 p.m., June 25, 2020
I took this picture and the one directly below, not to mention the two of me as I stopped along the Potomac River on my walk. I was walking from Old Town up to National Airport, whence I caught the Metro back to D.C. (I couldn't do the entire walk back again.) 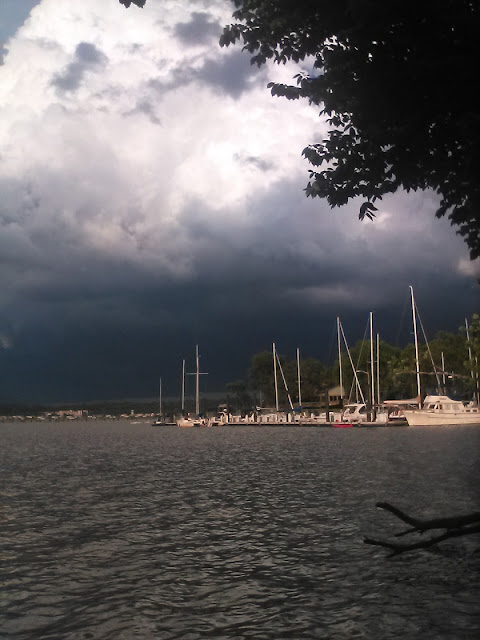 
I'm trying to post an entry -- except it is another one of my interminable ones on my current topic of fixation, the ugly chaos with multiple crises going on in the United States this year. Let's just call it Covid-19 and WOKE. Those kinds of frickin' entries, though, take FOREVER to write. And, yes, I realize nobody reads them "in real time." 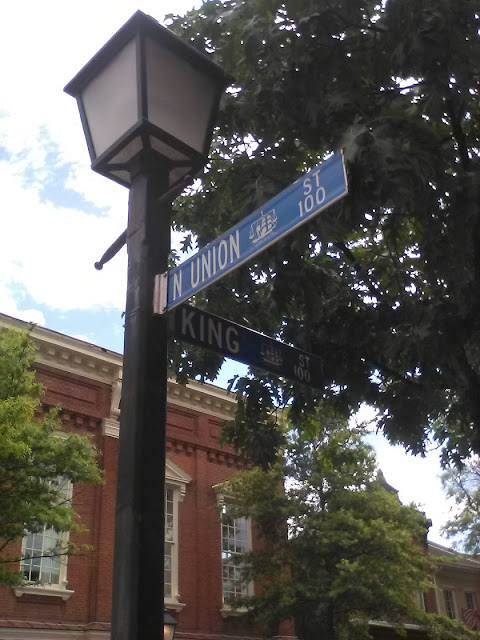 
What's more, I would like to do my laundry tonight and get it out of the way for the next week. Doing multiple loads of laundry -- requiring up and down trips on the elevator to the ground floor apartment building laundry room -- probably means I won't be able to finish that entry. 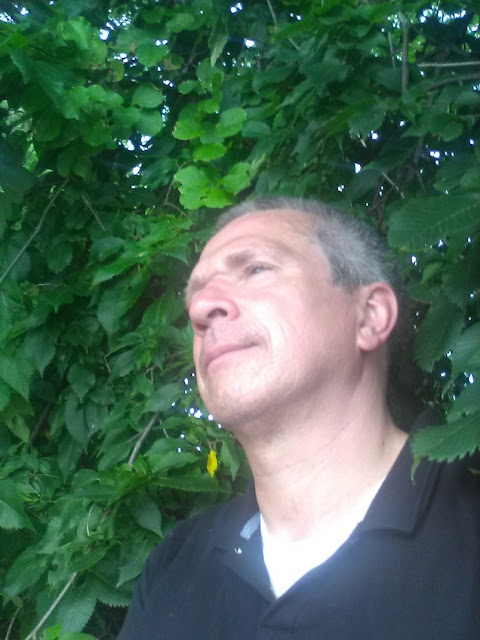 
Right now, I'm home in my little, lamp-lit apartment somewhere here in Washington, D.C. Thank God it's not the place I used to live -- for 15 years, admittedly though, in three different units in that horrible building. 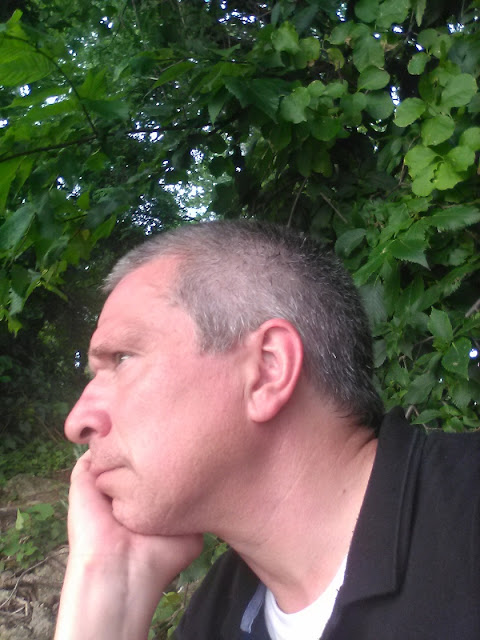 
Just FYI, it dawned on me earlier today that during all the years I lived with my mother as an adolescent and teenager, she never once had a doctor or a dentist for me. Ever. Now, it so happened that I never needed a medical doctor. My dad used to take me to a dentist. She was always deeply upset that she couldn't declare me as a dependent on her joint taxes with my stepfather. And, somehow, those taxes were always a disaster. 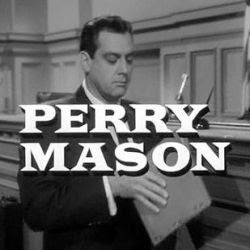 
I would put on the window a/c, except it sort of drowns out the television volume, and I want to watch this episode. Of course, the frickin' digital antenna's reception is mediocre. 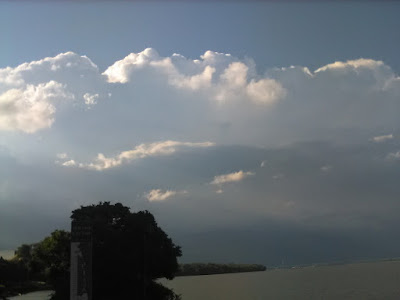 View toward Washington, D.C., with a thunderstorm on the north side of the District and in the Maryland suburbs dramatically visible, as seen from Tide Lock City Park in Alexandria, Va., 6:36 p.m., June 25, 2020
The "weather" bypassed National Airport and this part of the Mount Vernon trail. And another cluster of t-storms formed just south of Old Town -- heading into Maryland.
******* 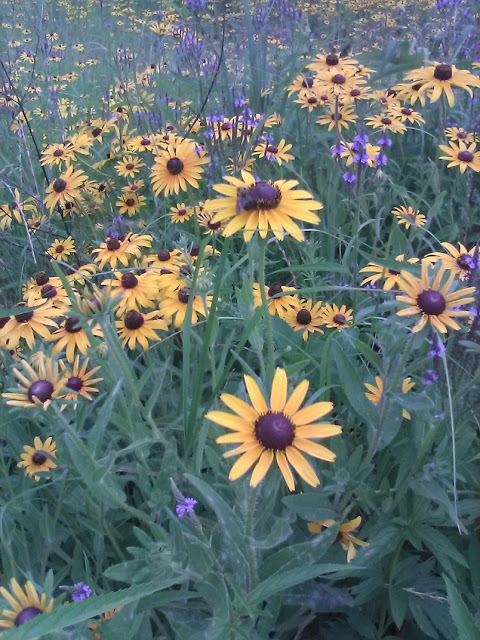 It's a warm and humid night with air temp around 79F, dew point about 63F. Tomorrow is supposed to be rather hot and very humid -- high about 94F, dew points probably about 70F, with a chance of thunderstorms due to the combination of a shortwave crossing Pennsylvania and a lee-side Appalachian trough.

Aerosol optical depth forecast through hour 240 from the 0Z 26 June 2020 run of the GEOS-FP model.
(This is actually the model that Gary works with a lot at the GMAO.)
It doesn't look like any of that massive Saharan Air Layer over the Gulf of Mexico and adjoining coastal areas it up here. There have actually been multiple pulses of such lofted dust.

GEOS 0Z 23 June 2020 model run showing dust extinction aerosol optical thickness (at 555 nm) through hour 240
While that's not so unusual, the amount of it was judging by air quality and sky conditions over the Caribbean. The CWG has had multiple entries on this event -- all suitably dire and, naturally, keyed into Covid-19 -- with the most recent here. 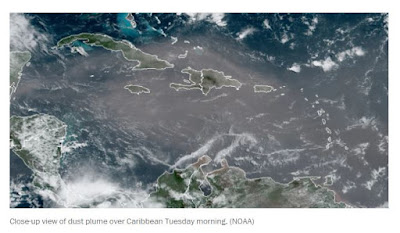 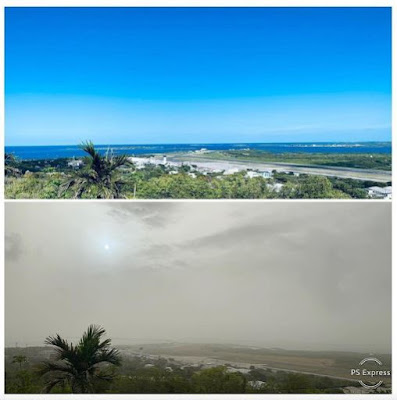 
For tomorrow, I'll probably go down to Old Town Alexandria again tomorrow. I met Tim there on Thursday but tomorrow will probably be solo. My plan is to post another entry tomorrow night, namely, the one I haven't finished. 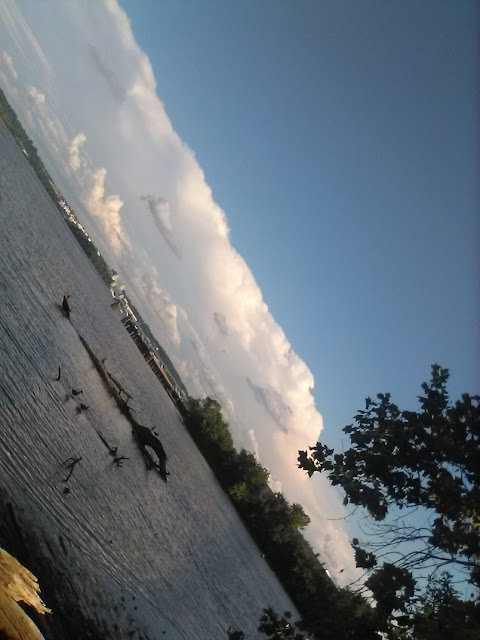 Potomac River view with distant thunderstorm visible over lower Prince George's and/or Charles Counties as seen from Alexandria, Va., 6:28 p.m., June 25, 2020
This was taken on my walk that I took yesterday -- including part with Tim -- from King Street Metro to South Cornerstone to the King Street waterfront (for lunch) and up to National Airport.
--Regulus
Posted by Regulus at 11:26 PM