Remembering An Unforgettable Pacific Northwest Sunday Morning 40 Years Ago Today: Thoughts On and Images Of the May 18, 1980 Eruption of Washington's Mount St. Helens -OR- "Vancouver! Vancouver! This is it!" 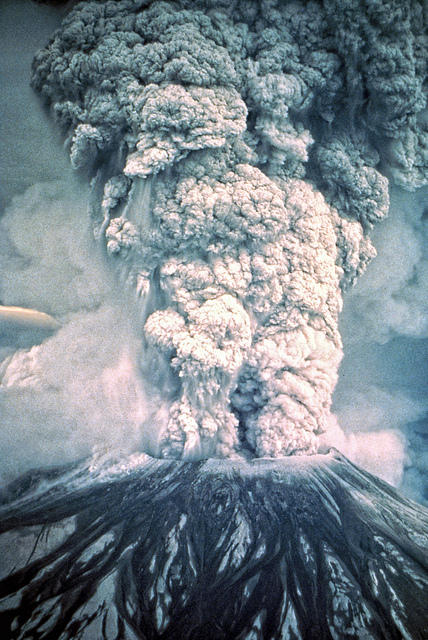 
It was 40 years ago today on Sunday, May 18, 1980, that Mount Saint Helens catastrophically erupted, forever changing both the physical landscape, local ecology, and, needless to say, human history of the great Pacific Northwest. 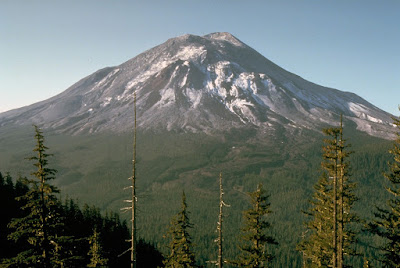 
Let's go back to that Sunday morning on May 18, 1980 in the late Carter era when Washington State's Mount St. Helens snow-capped, highly picturesque stratovolcano, then two months into a period of steadily increasing seismic and volcanic activity after 123 years of quietude. 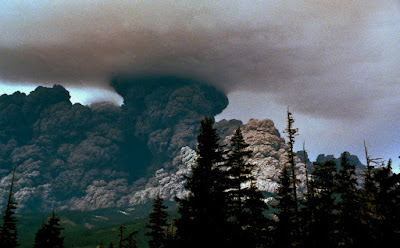 
At 8:32 a.m. Pacific Daylight Time on Sunday, May 18, 1980, a magnitude 5.1 earthquake under Mount St. Helens triggered one of the largest known landslides in recorded history as the north flank of the mountain underwent liquefication and, being such a slope, gravitational collapse.
Nothing good ever comes from ground liquefaction, but I digress.
The instant removal of ~0.67-cubic miles of material allowed, literally, hell itself to break loose, as the volcano's pent-up active core was suddenly "uncorked," releasing an estimated 24 megatons thermal energy, i.e., a few hydrogen bombs' worth equivalent. 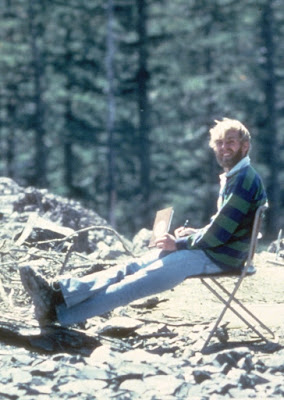 In the final recorded words of USGS geologist David A Johnston, 30, in a radio transmission from his observation post, Coldwater II, located six miles from the summit and looking down the barrel of the lateral blast:

Johnston was killed in a pyroclastic flow -- more of a tsunami -- and his body was never found.


Above: David A. Johnston at Coldwater II post on May 17, 1980 -- less than 24 hours before his death. What had been the Coldwater Ridge is now named the Johnston Ridge in his honor.
As is often the case, The Keeper of All Knowledge has a nice factual summation of it (although, given the attention on this 40th anniversary, it's possible the source text posted below may change):
Mount St. Helens is most notorious for its major eruption on May 18, 1980, the deadliest and most economically destructive volcanic event in U.S. history. Fifty-seven people were killed; 250 homes, 47 bridges, 15 miles (24 km) of railways, and 185 miles (298 km) of highway were destroyed. 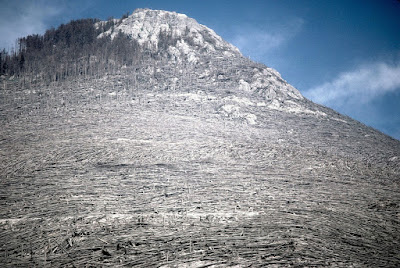 A massive debris avalanche, triggered by an earthquake of magnitude 5.1, caused a lateral eruption that reduced the elevation of the mountain's summit from 9,677 ft (2,950 m) to 8,363 ft (2,549 m), leaving a 1 mile (1.6 km) wide horseshoe-shaped crater.
The debris avalanche was up to 0.7 cubic miles (2.9 km3) in volume. The Mount St. Helens National Volcanic Monument was created to preserve the volcano and allow for the eruption's aftermath to be scientifically studied. 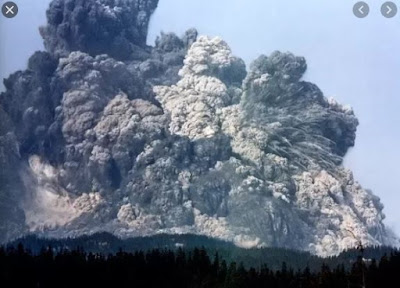 
The fact that the initial blast was lateral -- rather than a vertical one -- is what doomed many of those who died since they were in one of three concentric zones extending west-to-east -- the blast direction -- to include the direct blast zone, channelized blast zone, and seared zone with the latter. The implicit thinking at the time was that the blast would be a vertical one. 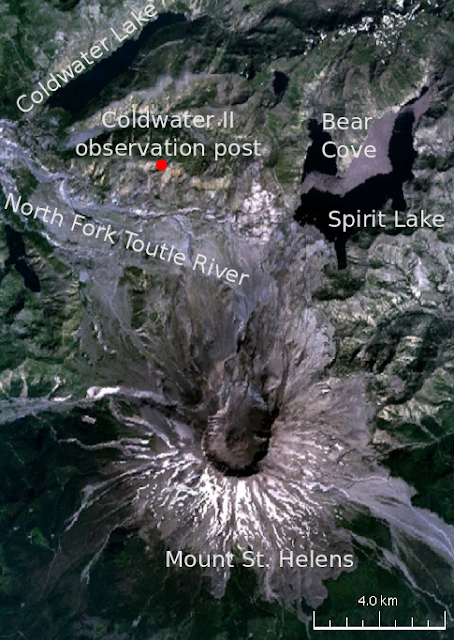 
According to this old fact sheet, about 150,000 acres of forest (both National Forest and State of Washington land) were destroyed with debris-filled streams, chiefly, the North and South Forks of the Toutle River. 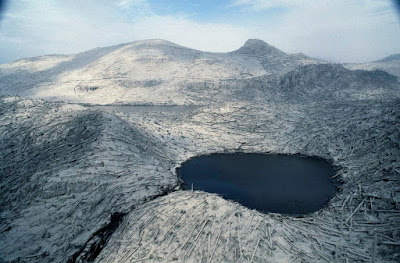 The ash cloud spread out 10 miles in width and reached between about 14 and 16 miles in altitude -- putting it into the lower stratosphere -- with significant ashfall and related disruptions to Yakima, Spokane, and Pullman in Washington and Moscow, Idaho. Portland and Seattle were spared and significant impacts since the blast was to the east.

GOES-3 satellite image of the Pacific Northwest looped between 1445 and 2045 UTC 18 May 1980 in mostly 1-hour increments (with a few hour-hour steps).
The mushroom like "explosion" of the volcanic ash cloud is quickly picked up by the prevailing westerlies.
Yes, this was back in the earliest day of the modern satellite record -- starting with the GOES family. We're up to GOES-16.
******* 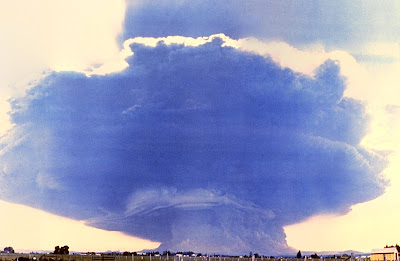 
A&E's Minute by Minute series produced an excellent ~45-minute documentary-style episode "The Mount St. Helens' Eruption" back in 2002. It was uploaded to YouTube by user YorkVid in November 2014. (With normal U.S.-style commercial breaks, the program runs 1 hour.)
I am reposting the YouTube version of this documentary directly below. It is without commercial breaks and runs just under 46 minutes. Hopefully, it will survive for more years to come on the YouTube platform.
The documentary provides a steadily-more-gripping account from the mountain's initial seismic rumblings in mid-March 1980 and first explosive outgassing on March 27, 1980 -- the first such eruption of this young, geologically very active Cascade Range peak since about 1857 -- to the motherlode eruption (Volcanic Explosivity Index = 5) on May 18, 1980. 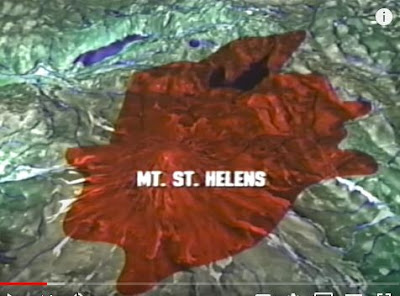 
The documentary also recounts how the creation of the "red zone" safety perimeter around the mountain was met with increasing pushback by residents who lived within it -- since they were under mandatory evacuation orders -- and how then-Governor Dixy Lee Ray (herself quite an accomplished, interesting, and outright quirky character) was reluctant to enforce it. 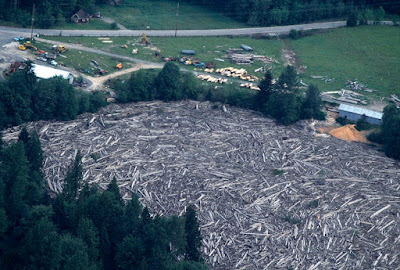 It follows a number of players caught up in the events of May 18, 1980 to include two sets of campers -- Mike and Lu Moore and their four-year-old and three-month-old daughters -- and Roald Reitan and his girlfiend, Venus Ann Dergan, camping 30 miles away in what they thought was outside the danger zone along the South Fork of the Toutle River. Their story of survival is truly amazing. 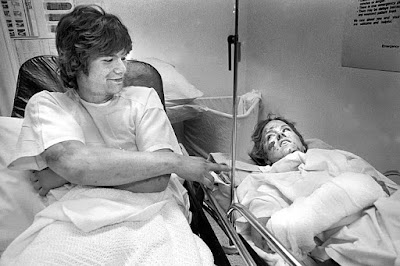 Roald Reitan and Venus Ann Dergan a few days later in a hospital in Longview, Washington.
*******

As this USGS site explains: 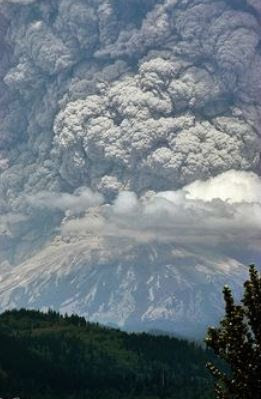 The lateral blast at the vent probably lasted no more than about 30 seconds, but the north-ward radiating and expanding blast cloud continued for about another minute, extending to areas more than 16 miles from the volcano. Shortly after the blast shot out laterally, the vertically directed ash column rose to an altitude of about 16 miles in less than 15 minutes, and the vigorous emission of ash continued for the next 9 hours.


The eruption column began to decline at about 5:30 p.m. and diminished to a very low level by early morning of May 19.
Consider the images shown in a 40-second sequence of photos taken by photographer Gary Rosenquist 11 miles away at Bear Meadows and stitched together in the animated gif posted directly below:

These images show a side of our physical planet that is difficult for our human minds to really grasp in terms of in its violently transformative power and speed. The sudden liquefaction of an entire flank of a large mountain and the nuclear blast-like explosive ejection unleashed by the instant uncorking of a highly charged volcano -- well, those aren't things for which we have normal frames of reference.
Another photographer in the Bear Meadows vicinity was a daring 20-year-old University of Washington student named Keith Ronnholm who -- having no business being there -- had bluffed his way past guards at the red zone perimeter and was there when the eruption occurred. He captured the following set of images that have been stitched together in a sort of animated gif:

Ronnholm tried to get out of his dangerous spot, but his vehicle was engulfed in the pyroclastic flow. However, he managed to escape (possibly on foot) and live to tell the tale.
Here is an additional image from the Ronnholm set: 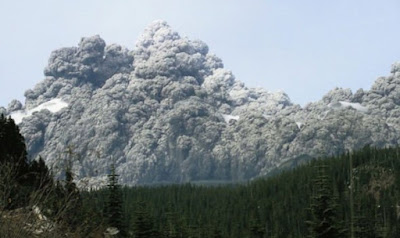 
Others were not so fortunate and paid with their lives that May morning 40 years ago.

There is the story of freelance photographer Robert Landsburg, a photographer who was four miles from the summit of Mount St Helens that morning and captured a harrowing set of images in the last moments of his life.

Perhaps knowing his fate was sealed, he put his camera in his backpack and used his body to protect it and the precious film inside. His backpack was found with his body and the film developed.

In its blurry, mildly damaged state, the pictures leave no doubt what was happening.


See here for more on Landsburg's story, as well as the story of Reid Blackburn, a professional photographer doing work for National Geographic who was also killed in the eruption.
Below are four of the images that Landsburg managed to take in what I assume are sequential order: 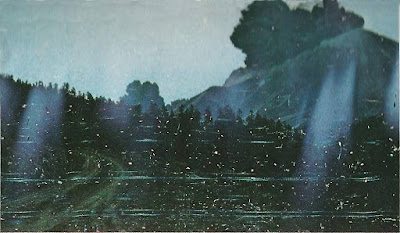 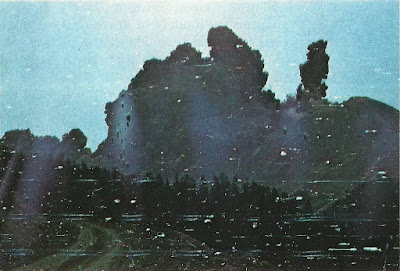 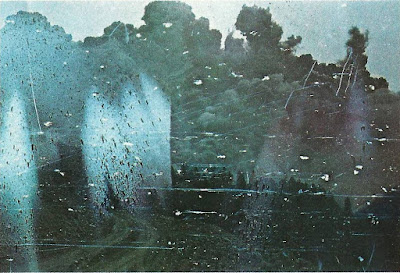 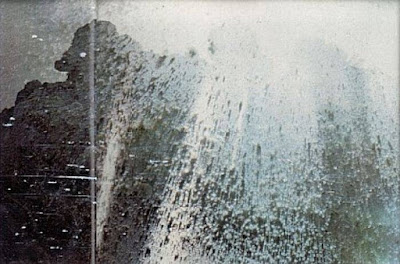 Then there is the story of Harry R. Truman (not to be confused with Harry S. Truman). 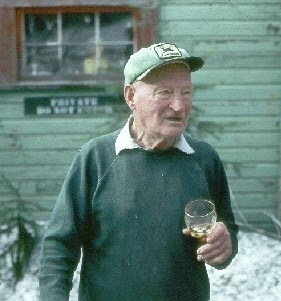 The owner and caretaker of the Mount St. Helens Lodge on Lake Spirit, Truman flat out refused to evacuate and was killed in the eruption. He was 83. The following year, Truman was portrayed by Art Carney in the docudrama St. Helens, Killer Volcano.


For the historical record, below are two newspaper headlines from the following day, Monday, May 19, 1980:

The New York Times, May 19, 1980
I'm including the New York Times simply because it is the "newspaper of record" of the United States.
Given the proximity to "the story," The Oregonian headline is awesomely appropriate and the coverage far more appropriately riveting for the scale of what happened: 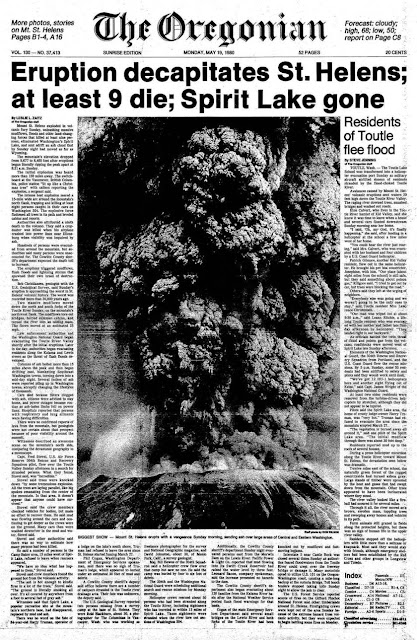 
For the section below, I do not have my own pics, but I found this photo-essay article that was published on the News.com.au website on Sept 20, 2017.

Written by Australian freelance journalist John Burfitt (pictured left), it contains images he took on a visit to Mount St. Helens in 1987.

That being the case, I'm posting his pics below.


On a personal note about Mount St. Helens, here are some thoughts ...
I remember following the news about Mount St. Helens that spring of 1980 when I was 10 years old and living in New Jersey (my last regular year of living there, although I would spend a lot of summers there into the early 1990s). I also remember the day of the big eruption. 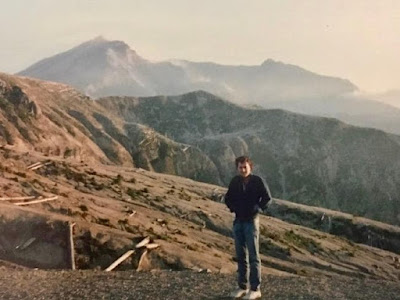 It was a Sunday and I was visiting my maternal grandmother in South Amboy, and I remember my dad picking me up to take me back to Long Branch where I lived with him and my paternal grandparents. In fact, it was precisely because of the big news of the massive eruption that I remember where I was as it was happening.
I also remember waiting with anticipation if -- as was being discussed in news accounts as the ash cloud tracked across the country -- if any of the ashfall would make it all the way to the East Coast. 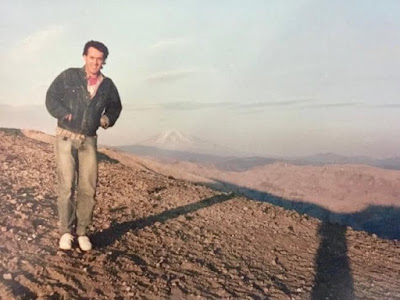 Eight years later in September 1988, at the start of my short-lived post-high school stint in Seattle (at the University of Washington), my dad flew out there with me and we rented a car and did about two weeks' worth of driving -- including a visit to Mount St. Helens. We took a three or four hour long hike on a path through ankle-to-hip-deep ash, even tumbling in the ash down the seemingly frictionless ground. I even remember tossing a shoulder bag I had with me -- letting it roll wildly down the ashy mountain side.
Probably wasn't the best idea we had. 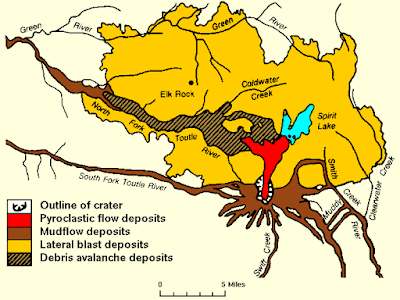 In 1988, there was still thousands of acres of felled destroyed forests (just ghostly flattened sticks, really).
We also drove around the mountain on a clockwise path on a seemingly endless nighttime detour in the forested wilds between the towns of Morton and Cougar -- eventually reaching the latter and finding some motel (see map below). I remember being afraid that the rented car would break down. 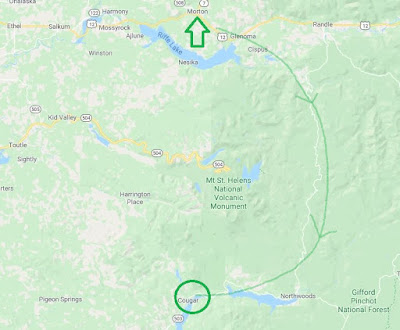 OK, I'm going to wrap up this entry. To be clear, I would like to write a bit more about the possibility of a Mount Rainier eruption and the truly cataclysmic "lahar" it would create from Rainier's glacier field. (I don't recall hearing the term "pyroclastic flow" back then, and certainly the term "lahar" was not used.) 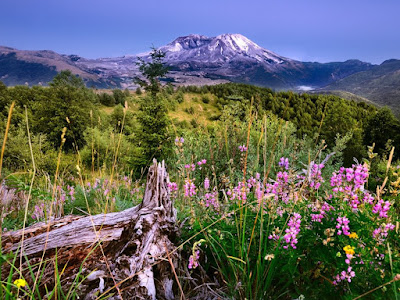 
Then there's the whole Yellowstone Super Volcano thing (which was never mentioned back in 1980). But I don't want to go down either of those rabbit holes right now.
That being the case, that's all for now.
--Regulus
Posted by Regulus at 8:48 PM