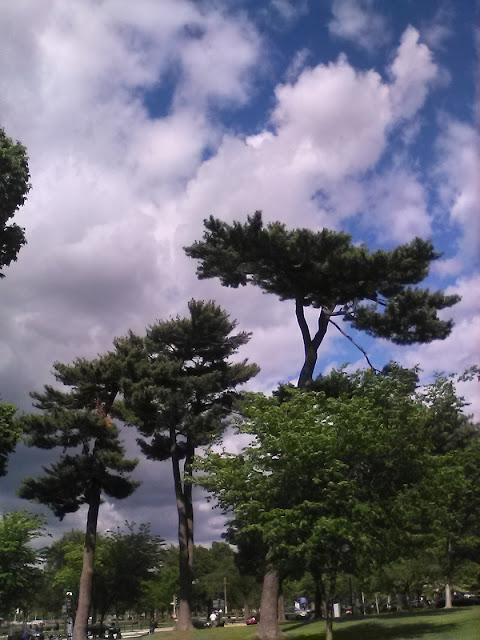 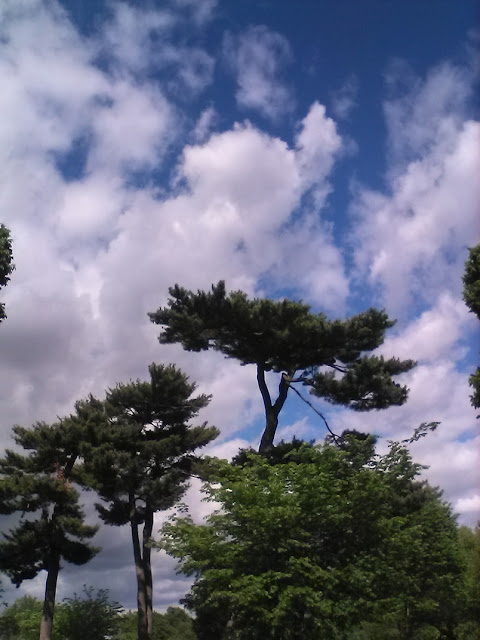 As with other recent entries, this one contains an assortment of outdoor pics that I took in the past month or so -- but are not specifically topically related to the entry. 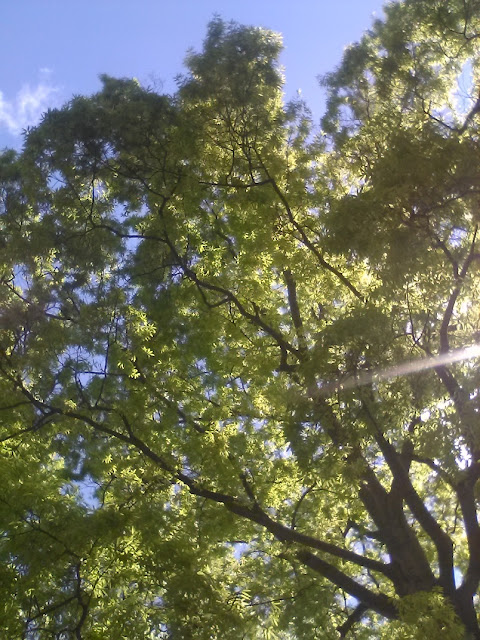 I took the first batch of them on on Friday, May 1st, on my mid-afternoon walk into the office on a route involving the Foggy Bottom district, Virginia Avenue (see image directly above and two images directly below), and the National Mall. I'm only captioning some of the pictures, but the file names contain place/date/time information. 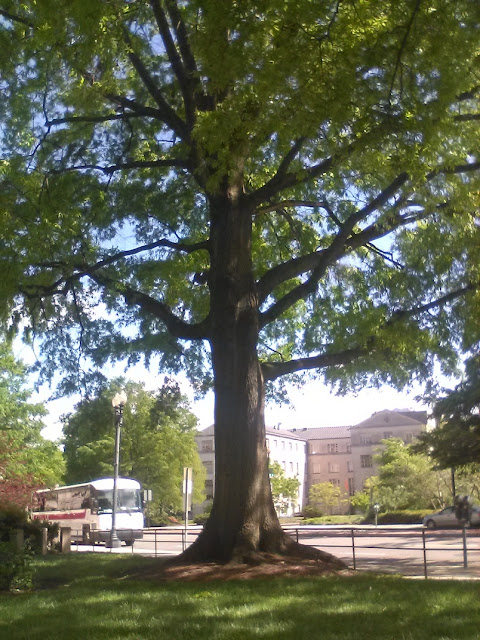 I composed this entry in three different installments with the first between about 12:30 a.m. and 2:30 a.m. Monday, but I was just too tired to complete it and sort of crapped out. 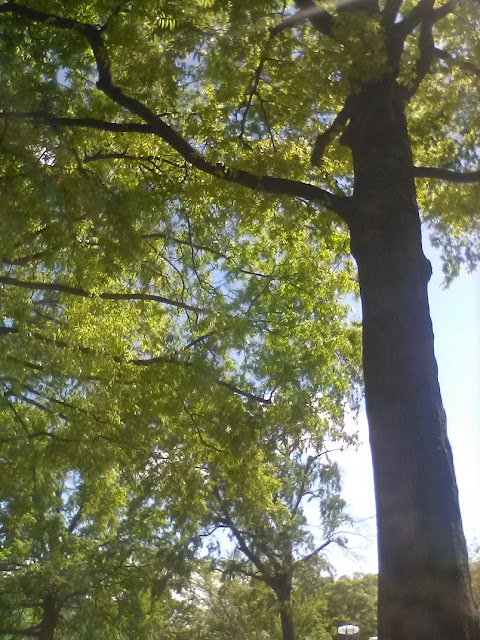 I then composed the second part of it early Monday afternoon, but I didn't finish it then because I wanted to get into the office at a reasonable hour, not to mention walk there (at L'Enfant Plaza) on this delightful day. 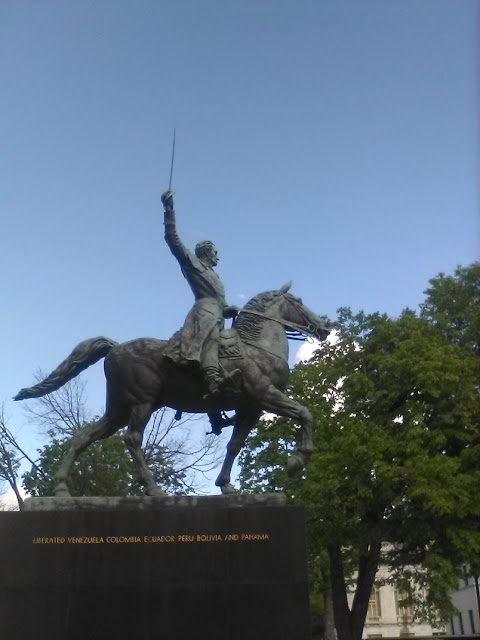 
By the time I returned to this entry in the third installment, I ended up adding a lot more content. Anyway, that aside, I'm finishing and posting this entry late Monday night. 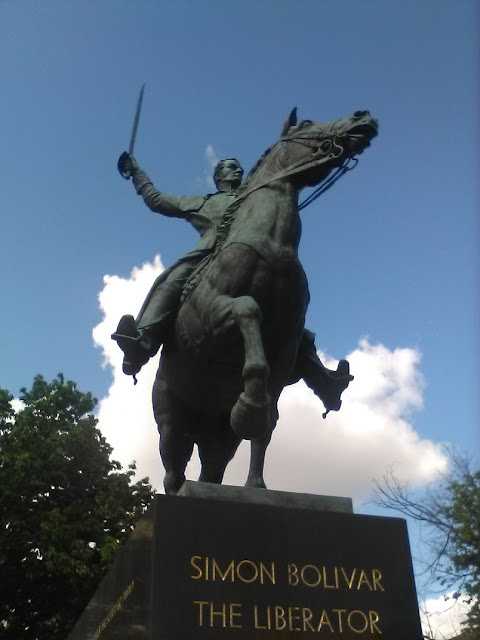 
It has been a delightfully sunny day (with a few fair weather clouds) following last night's stormy deluge. Temperatures are around 70°F, which is already 5°F than the 65°F that was forecasted. Temperatures always "overperform" around here. 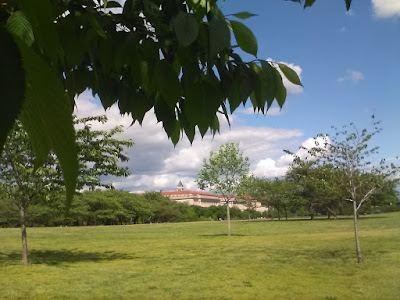 As for last night's rainfall totals, I posted those below as part of the original part of this entry. For starters, below are some radar and other weather-related imagery from last night... 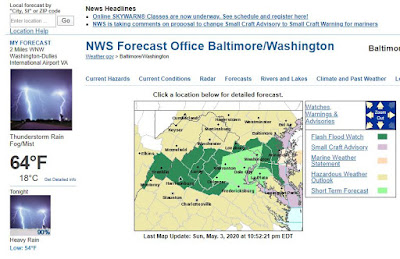 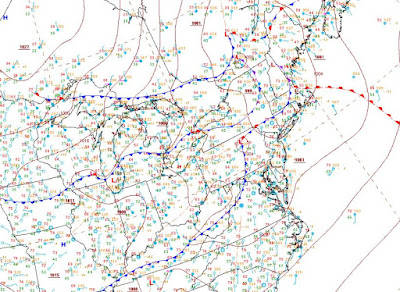 
The heaviest rainfall occurred here in the D.C. area with less in and north of Baltimore.

Of note, the Thursday rainfall totals (as added to the April totals) were as follows:

In short, we are in a wet, cool pattern after our functionally non-existent winter.


As for today, a high pressure system is building overhead. The next weather system is progged for Tuesday into Wednesday with a deepening upper level low and highly meridional (elongated) pattern.
The result will be breezy and cool conditions with instability clouds on both Thursday and, following another frontal passage, Saturday.

NWS/CPC 6 to 10 day temperature departure probability outlook, valid 09 - 13 May 2020
To be clear, this is just a probability map of whether temps will be above or below normal -- not actual air temps or temp departures. However, temps are forecasted to run 10°F to 15°F below normal -- which is something that doesn't much happen anymore these globally warmed days. 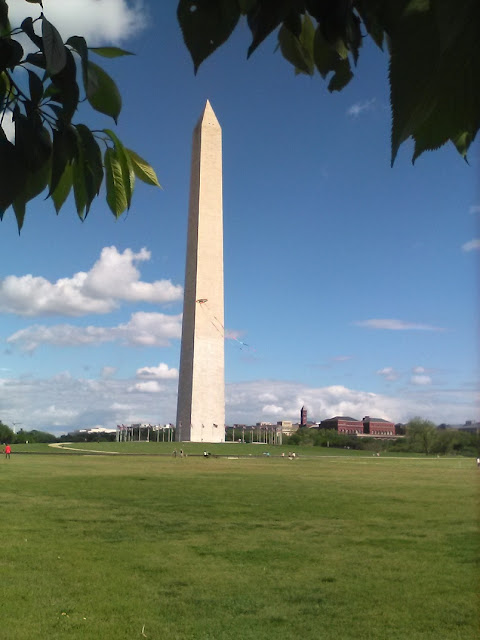 What's happening is that the polar vortex -- which was so damn strong, persistent, and stable since December which resulted in our functionally non-existent winter across the mid-latitudes -- is having its final spring breakdown, and a lobe of it is set to sweep across the eastern United States by next weekend. 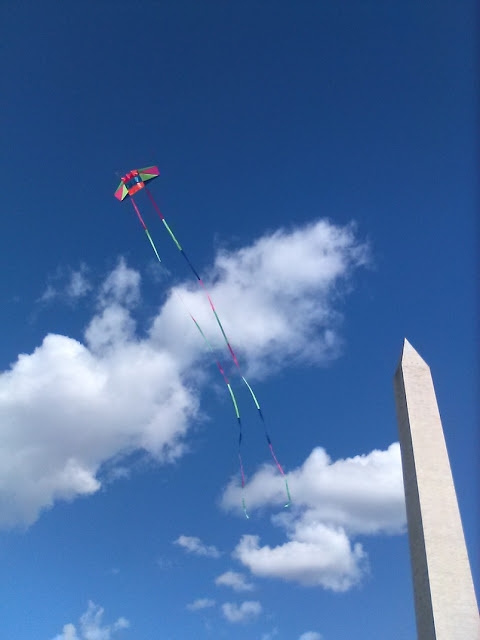 The result will (should) be rather chilly conditions this weekend with nighttime lows of 40°F 45°F even in the District proper -- and daytime highs about 60°F along strong low-level instability in the afternoon hours with gusty breezes and stratocumulus/nimbostratus clouds with possible showers in between bursts of sunlight. 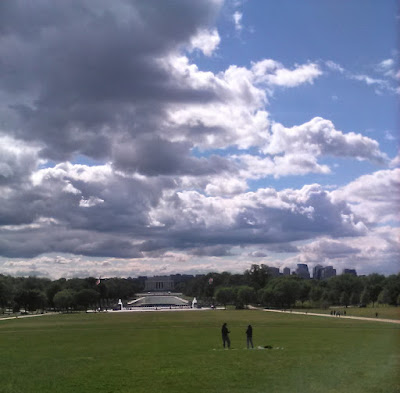 OK, finally, the last pic from May 1st. The others below are those I took in April on two different days -- April 18th and April 19th, respectively. 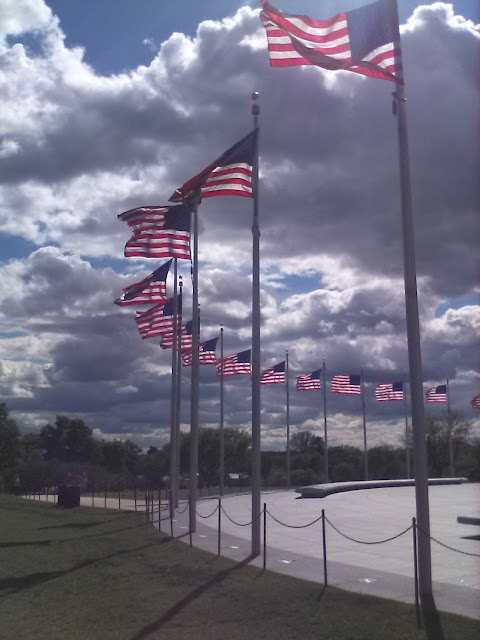 
From my Monday wee hours entry... 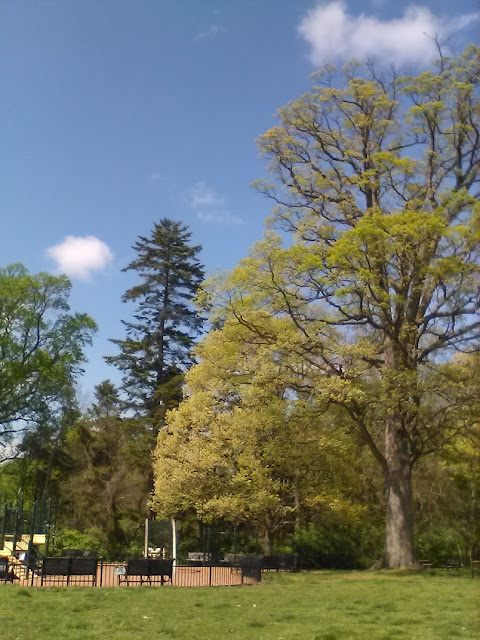 Breezy, cool spring day as seen in Montrose Park, Washington, D.C., 2:47 p.m., April 18, 2020
This pic and the ones below were taken in Montrose Park and the forested park into which it merges, namely, Dumbarton Oaks Park. This was part of a larger Georgetown walk on Saturday, April 18th that I took (with those included, too).
*******


This was a very nice weekend that included doing things and going to places NOT in D.C., which made it the first weekend in, like, three months that I left the District of Columbia during this time of the quasi-COVID-19 pandemic. 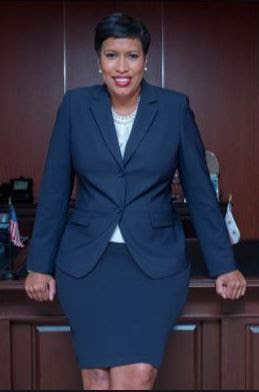 We're six weeks into Madam Mayor Muriel's lets-stay-locked-down-until-Jesus-returns with no end in sight. Madam Mayor is so WOKE on some many levels INCLUDING medically correct that she is in a state of ecstatic bliss over the economically crushing and spiritually destroying lockdown. She's also eager to keep it going until "at least" the mid-2040s. Oh, and let's not forget the general gymless morbid obesity as side benefit.


Throw in midnight basketball, needle exchange problems, and ever-metastasizing outdoor homeless encampments, and Madam Mayor Bowser will really be cooking with gas in her WOKE utopia. 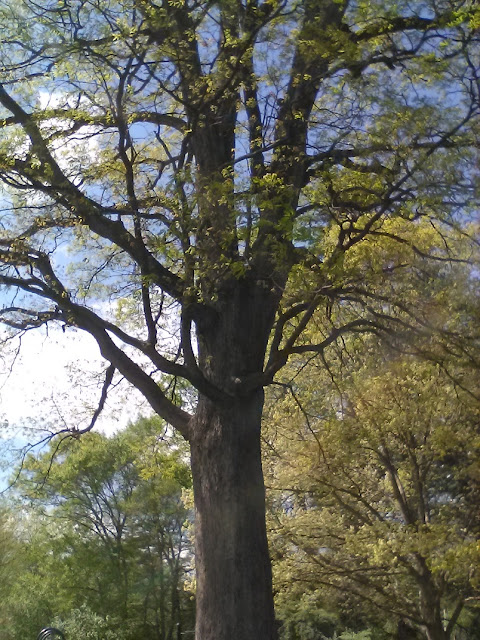 I guess it's obvious at this point -- well, for anyone is a regular reading of this blog, which is no one -- that my own normally Social Democratic political leanings aside, I am much more in tune with the Republican approach to this situation with gradual, phased reopening of the world. 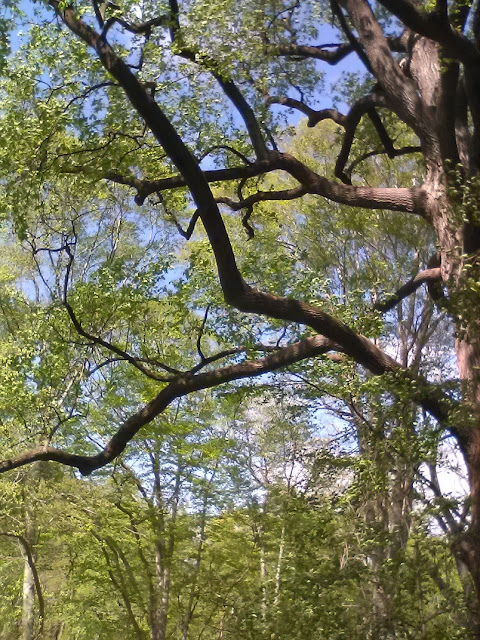 It is in contrast to the liberal Democratic well-intentioned but highly problematic approach of total societal control, whereby everything is kept in lockdown shutdown with Second Great Depression-like conditions and potential collapse of supply chain and supply webs into some Mad Max apocalyptic reality until the last 105-year old woman doesn't die of "the coronavirus" (COVID-19 due to SARS-CoV-2 viral infection). 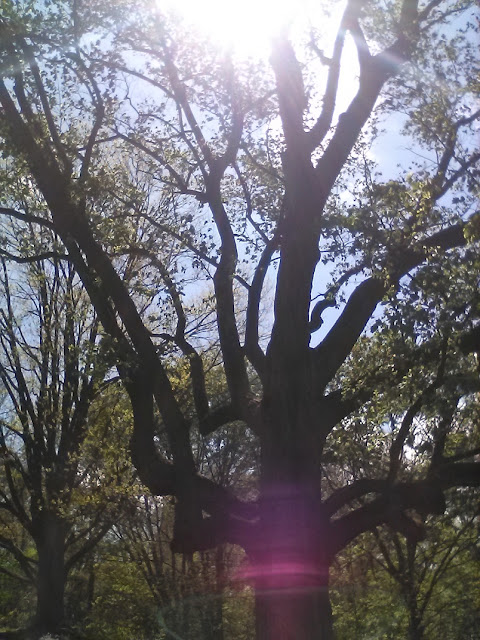 What's more, I'm really annoyed with and offended by a certain type of -- how shall we say?? -- D.C. millennial, usually a dopey white woman between the ages of 24 and 38, wearing her mask at all times including outside as part of what I'm calling her "social distancing viral virtue signaling." 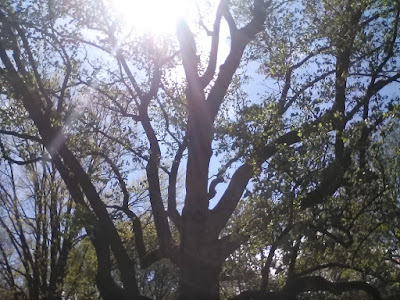 Ridiculous behaviors on their part include LEAPING off sidewalks into vehicular traffic to avoid a fantasy viral infection. Silly bitches. (If her man is acting that way, that's because he's well on his way to becoming a buccal-pumping frog on a domesticated lily pad.) 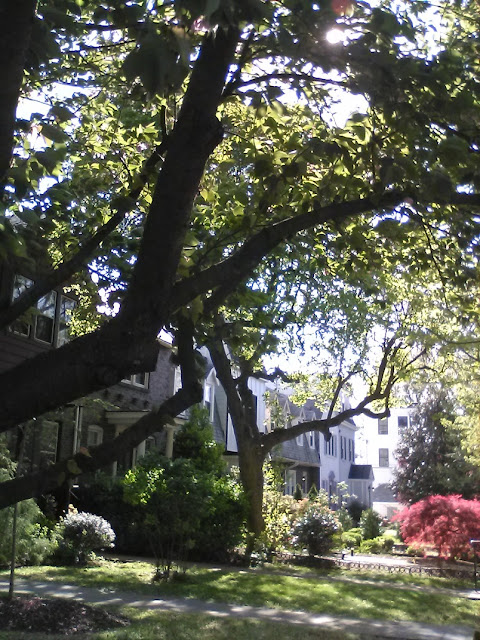 As should be obvious by now, we're quickly leaving the pandemic part behind and now entered the cultural war component of this COVID-19 quasi-pandemic.
Now I want to be clear that I'm hardly in favor of these gun fetishizing neo-Confederate and/or neo-Nazi militia-types parading around with their assault rifles and crudely made Trump insignias and misspelled signs demanding, in Trump-tweet-speak, "liberation." 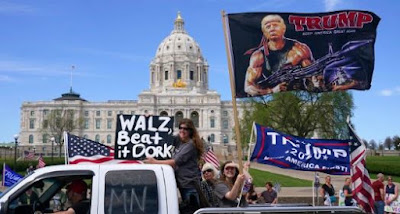 Yeah, like these crazies.
Although, to be fair, I've seen a lot worse with the gun crazies. This group just looks more clownish than anything else.
*******


As for my weekend, on Saturday, I accompanied Fred and Doug out of D.C. and up to Carroll County to a place called Thorne Farm near Westminster. We went there so that Fred and Doug could buy some seedling plants for their community garden plot at Fort Totten. We stopped in Brookeville on the way there to meet a friend of theirs named Ann -- who used to work with Doug but now works for the National Park Service -- and follow us to the farm. 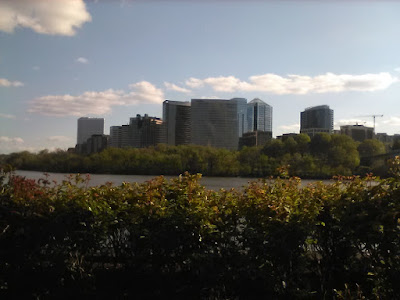 The motivation of this was the cancelled Maryland Sheep and Wool Festival, an annual event, so instead we went to Thorne Farm.
I can't remember the last time I was in Westminster, but it has probably been at least 20 years. We stopped for a lunch-to-go from a place called the Pork and Beans Store -- not a place I would typically go, but Fred wanted to stop there, and it turned out to have nice sandwiches and a friendly pair of young ladies working there. 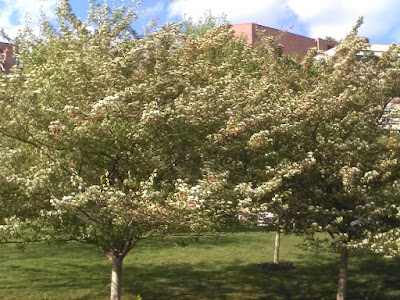 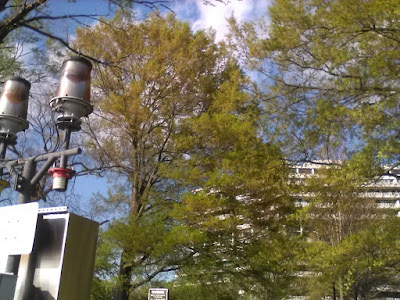 We went back to Ann's house. (She and her husband have lived there for many years and raised two daughters.) We ended up having a wonderful backyard picnic with food and drink as a brilliantly sunny day transformed into a starry, moonlit night before riding back into D.C. I was home by 12:30 a.m., but having had a lot to drink and eat, went to sleep. 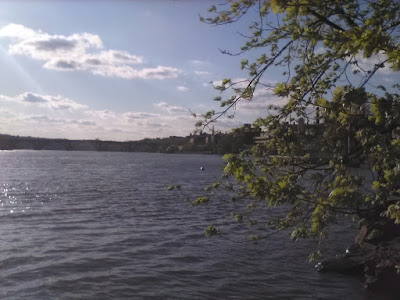 On Sunday, I got up around 1 p.m., and after getting ready, proceeded to walk through Georgetown over to the University and then along the Potomac -- which was swirling, chocolate brown, and filled with tree branch debris and assorted litter, not to mention in borderline flood stage. (To be clear, the picture taken directly above is of the Potomac River back on April 18th when it wasn't elevated.) 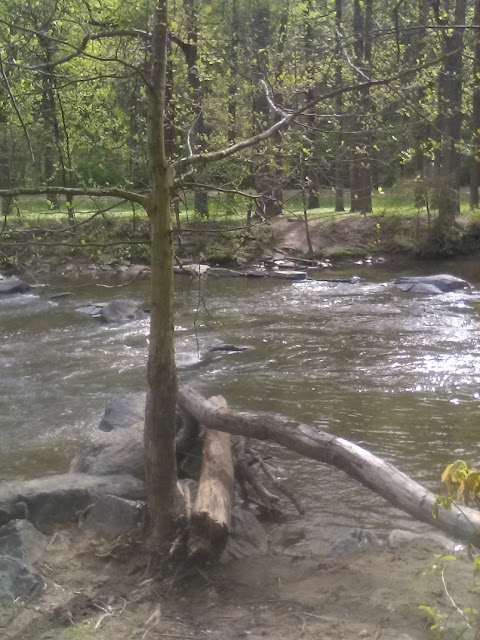 
From there, I went to the Whole Foods in Foggy Bottom to grocery shop, got home, unpacked, and then headed over to Doug & Fred's place -- next to my former residence where I spent 15 fucking years -- for our Sunday night dinner party and Brit-com ('Allo 'Allo!) viewing soiree with them and Aydin. 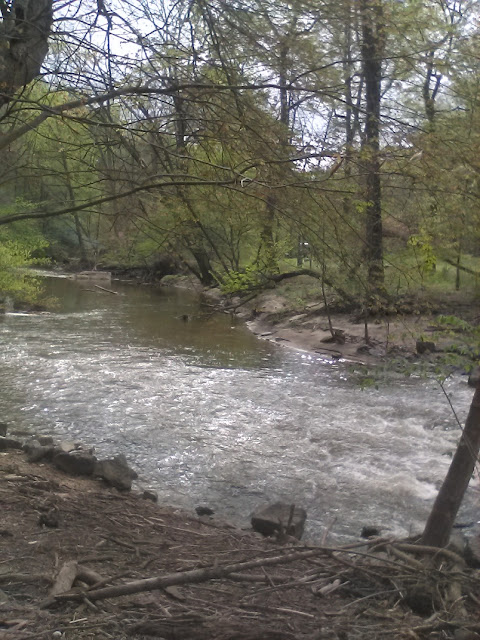 It was as I was walking home via the Safeway, where I stopped to buy some paper towels (a massive eight-pack) and Seltzer water. The deluge hit as I was walking home. I got home, dried off, and watched my late night comfort TV to include The Honeymooners, Becker, Murphy Brown, Designing Women, and Alice on one of my trio of regular-viewed channels. 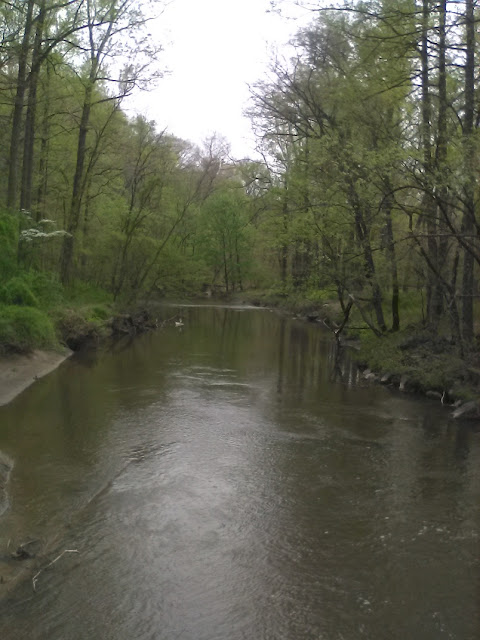 Oh, I should mention that while I wrote this entry, I watched the episode of the Murphy Brown called "Waiting to Inhale," and here is the most relevant part (slightly disjointed -- no pun intended -- at the beginning) when Jim, who has purchased then-totally-illegal marijuana for her to ease her chemotherapy-related nausea, smokes a joint with her.

It's pretty funny -- and just FYI, I find pot for recreational purposes disgusting. I make no comments about its alleviative qualities for chemo side effects.
OK, that's all for now. My next planned entry will be in a day or two.
--Regulus
Posted by Regulus at 11:59 PM