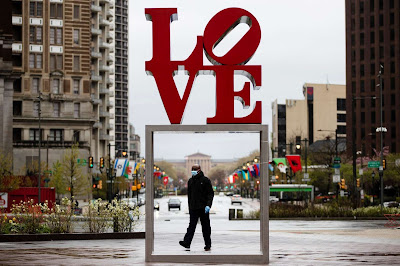 
As an update on the SARS-CoV-2 pandemic and resulting COVID-19 public health emergency, and it includes some news-related pictures that I found online. 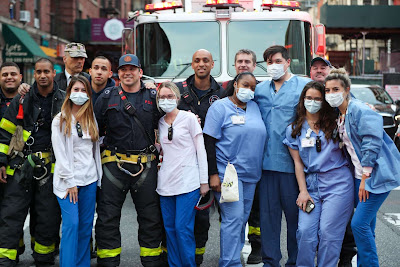 Firefighters and healthcare workers in New York City gather for a picture during the COVID-19 pandemic,
April 12, 2020
*******


Focusing just on the United States on Tuesday, April 14th, 2020, unfortunately featured a new high on the number of fatalities nationally and in a number of states. 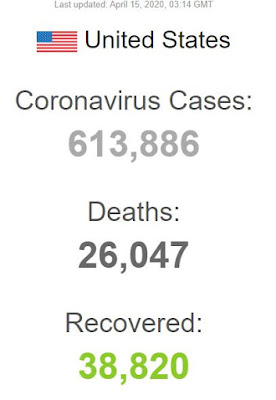 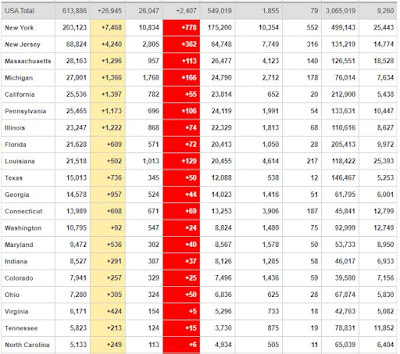 
I need to note that the addition of the 3,778 "probable" COVID-19 fatalities to New York's total dramatically increased the April 14th death toll, as reported on the Worldometers.com site. The revised totals for these three days plus the three days that follow (ending 00 GMT 18 April 2020) are as follows: 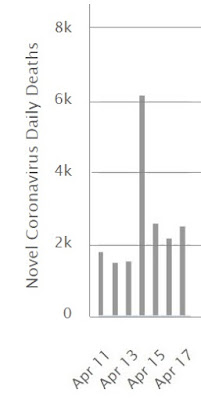 It's unclear if the steady number of new cases is because those being tested are sick (that is, COVID-19 symptomatic) or if testing itself is expanding from its abysmal state. 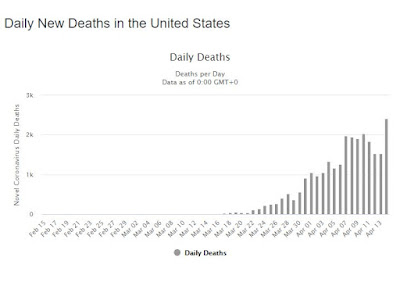 
To be clear, the Worldometers.info daily aggregation site runs from 00 GMT (UTC) to 00 GMT, or 8 p.m. EDT to 8 p.m. EDT the following day, which is different than the timeframes used by other aggregation / dashboard sites such as Johns Hopkins Coronavirus Resource Center and the COVID-19 Tracking Project. 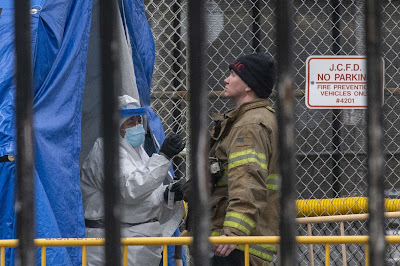 
The number of new cases in New York, though, was 7,468 -- an increase from Sunday and Monday (perhaps depressed by the Easter holiday) but down from the 10,000 or so cases recorded per day between April 7 - 10. 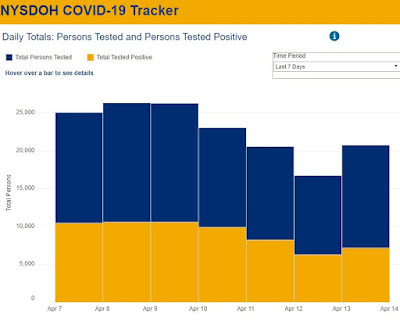 
Keep in mind that most of these New York deaths are occurring in New York City and its immediate in-state suburbs including Long Island, while most of the New Jersey ones are within about 50 miles of New York City. 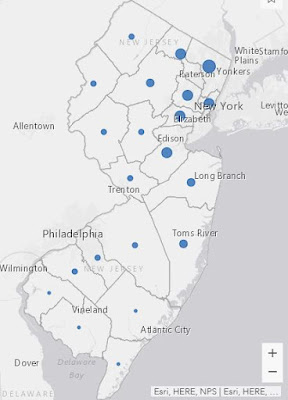 Here are the top 10 counties in New Jersey by positive cases and their death tolls so far: 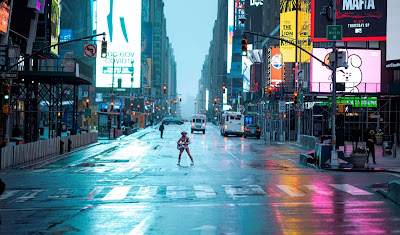 
Of note, the New York City Department of Health and Mental Hygiene has concluded that an additional 3,778 deaths should be added to the COVID-19 fatality as "probable" COVID-19 cases. 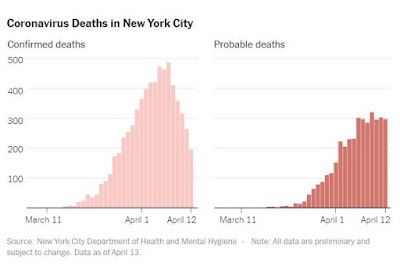 
These individuals passed away before they could be tested -- in places such as hospital emergency rooms, at home, or in nursing homes. This increased New York's overall death toll to over 10,000. What's more, as this New York Times article notes, far more people have died in New York City, on a per-capita basis, than in Italy — the hardest-hit country in Europe. 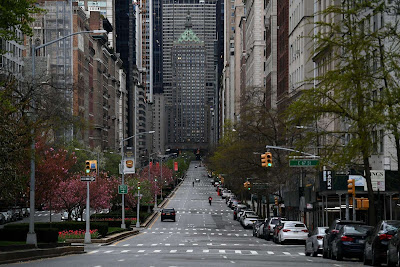 Nearly deserted Park Avenue in Midtown Manhattan, New York City during COVID-19 pandemic, April 10, 2020
The air quality sure is good these days ... and it goes beyond just the widespread economic shutdown due to the public health emergency.
******* 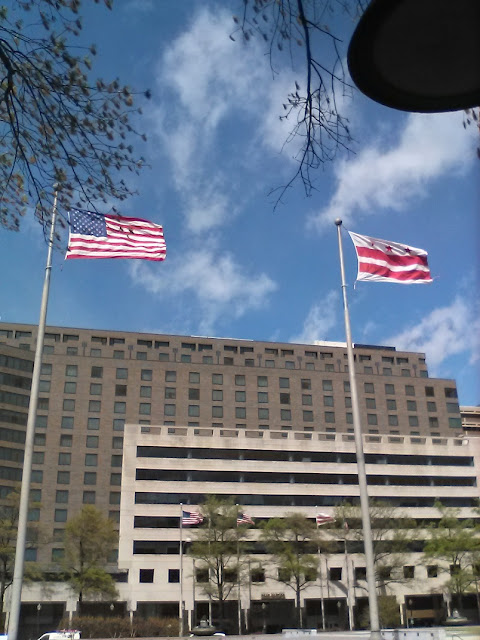 
Here in D.C. on April 14th, there were 105 new cases and a record number of fatalities, 15. This brings the total number of cases to 2,058 and the total number of deaths to 67. That's troubling to me given the extreme social distancing so many people have been practicing here in the District, a comparatively small jurisdiction, for the past month. 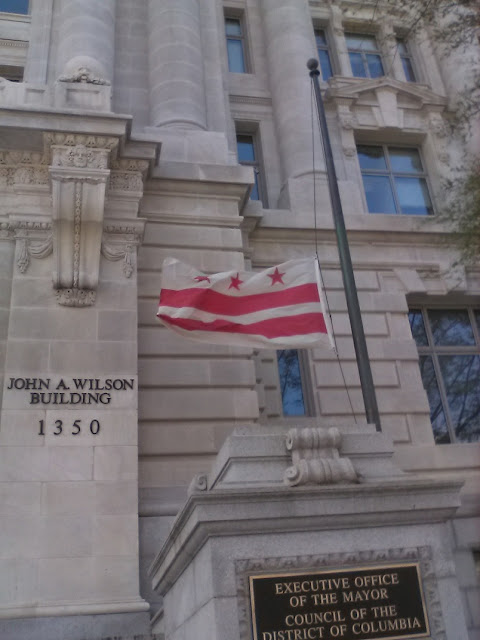 
Oh, yes, Wyoming recorded its first death on April 13th -- making it the last of the 50 states to do so.
The Worldometer site includes other non-governmental entities such as the U.S. military and "international conveyances" (cruise ships), as well as a new one, the Navajo Nation, where 28 deaths and 813 cases are reported. 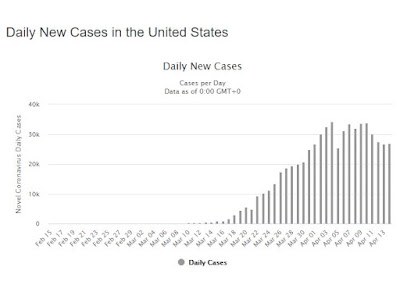 
California continues to have low counts -- 25,777 known cases and 789 deaths as of this writing -- despite its massive size, perhaps because of the quick efforts of Gov. Gavin Newsom. 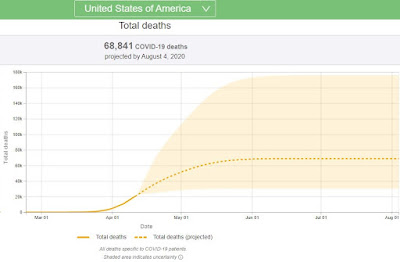 As for the IHME COVID-19 Projections model, after last week's sharp falls, it has trended up a bit in its middle range of fatalities -- from 60,400 up to 68,841 with a range from 30,188 to 175,965 (see above image, slightly truncated on the left side to exclude February).
I'm going to leave this COVID-19 update at that -- and NOT get into any of the tentative plans for relaxing social distancing or the partial reopening of any presently closed parts of regular civil life such as schools, restaurants, gyms, etc. 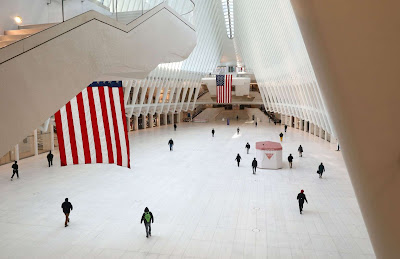 
I will say that the regional pacts made by West Coast and certain East Coast governors yesterday set off Trump into a 2-1/2 hour meltdown and silly propaganda fest worthy of Fox News and Breitbart.
Trump's malignant narcissist -- probably a diagnosable antisocial personality disorder -- led into him one of his now-daily shit-fests with the White House press corps and caused him to declare he has "total" authority to do whatever he wants -- including "ordering" the country "reopen" by fiat. 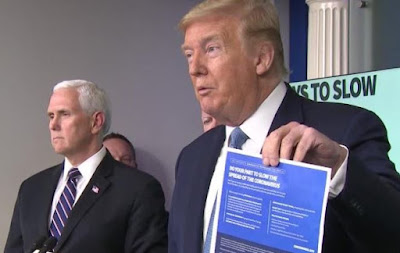 Outside of Trump cult-enthralled one-party Red States such as Alabama, Mississippi, Arkansas, Oklahoma, and South Dakota, this is all horseshit.
It's horseshit, or rather, it would be except there are so many ass-wipe fascist frat boy Federalist Society / Brett Kavanaugh types that have virally infected and colonized the federal judiciary thanks to the human vector of Mitch McConnell that, I suppose, anything is possible. 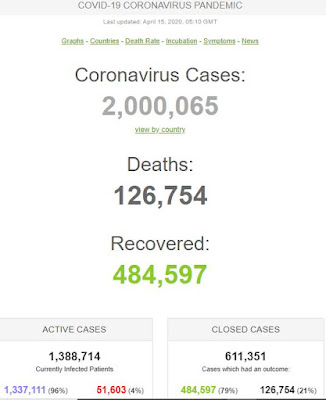 Italy and Spain appear to be emerging gradually from their pandemic situations, but "normalcy" is a long way off. Ditto here. 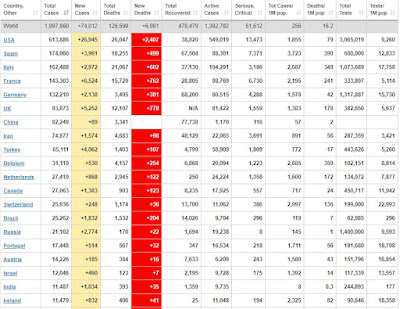 As for another story from this COVID-19 pandemic ...


Here is the Washington Post article about this (featuring Mr. Gordon): Cruise ship crews: Stuck at sea, paydays dwindling and searching for a way home. 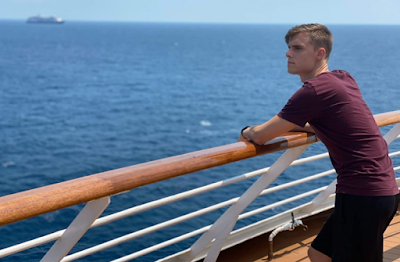 Directly above is an image of a young man -- a cruise ship worker whose occupation includes that of cabaret dancer -- named Matthew Gordon aboard the MS Volendam, one of the multiple cruise ships that cannot find a port to dock and allow the remaining people onboard, specifically, the ship crew, to disembark. 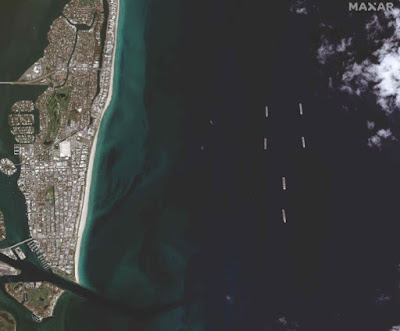 
Clearly gay Mr. Gordon is from Augusta, Ga., and he's not that far from home -- but stuck on the ship for now over a month, presently in the waters off the Bahamas. Multiple ships are stuck off the South Florida coast. 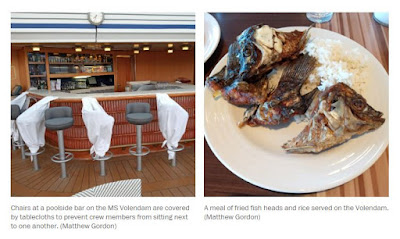 Bar stools with covers indicating social distancing requirements and dinner onboard this MS Volendam de facto prison ship; images from Matthew Gordon.
*******
Perhaps they should all bum-rush fucking Fisher Island, home to the world's foremost celebrity billionaires and oligarchical trillionaires, all of whom were able to easily bribe "make a deal" to get all the COVID-19 testing equipment -- specifically, rapid blood test kits -- they and their servant staff could ever want or need. 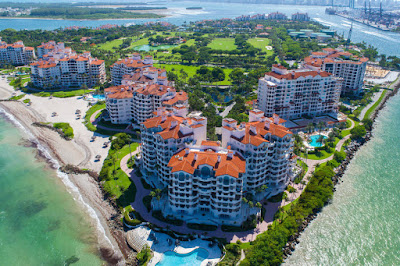 Didn't Oprah (D - Dreamworld) once live there? Maybe she still does. Who knows with people like that. They live in a different reality than you or I. And I thought Rush the Vulgar Lying Pigboy (R - Cigar Chomping, Butt Munching) lived on Fisher Island, but apparently he's on "mainland" Florida. 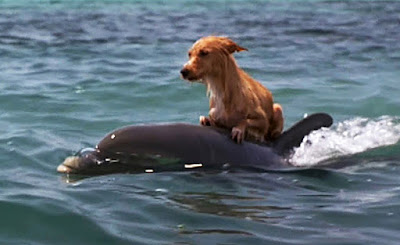 I wonder if I were trapped as a prisoner on a ship like that -- eating a diet of fish heads and rice, as Gordon is -- with the Florida Atlantic coastline in sight if I would just try to jump overboard and swim to shore. 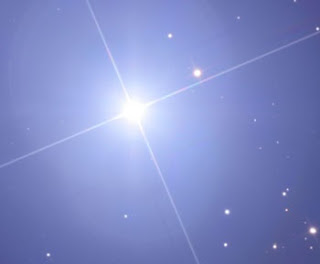