Earth Day 2020: From an Unlikely Season of Pandemic Looking Back 50 and 30 Years -OR- Spring Leaves Falling Through Time 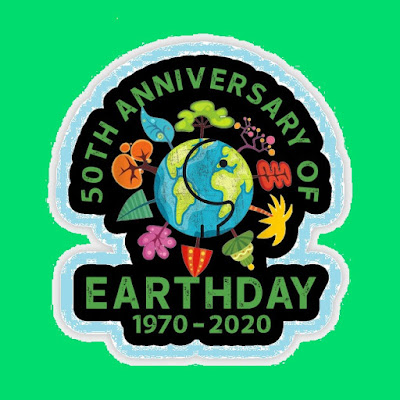 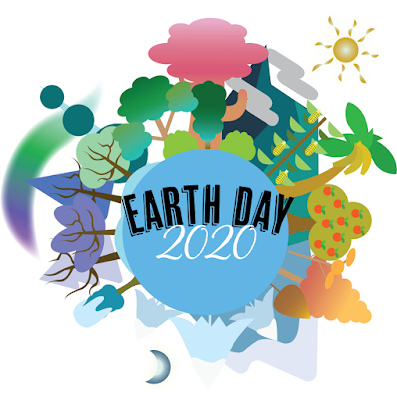 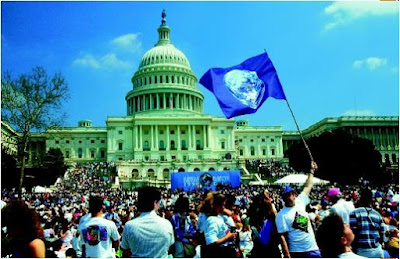 Earth Day 1990, U.S. Capitol grounds, Washington, D.C.
I mention this because it just so happens that I was here in Washington, D.C., for Earth Day 20 on that long-ago Sunday, April 22, 1990.
Before I begin, let me just say upfront that this entry is NOT about the environmental / ecological inspiration and ongoing motivation for Earth Day, nor the toxic American political environment with its grotesque Manichean Red/Blue "tribal" split. 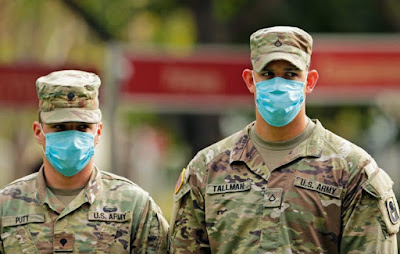 Two Florida Army National Guardsmen stand at attention at a press conference involving the ridiculous governor,
Fort Lauderdale, Fla., April 17, 2020
This picture and a number of the ones below are from the USA Today article-linked below as part of 130-photo-gallery set. I'm not captioning them.
******* 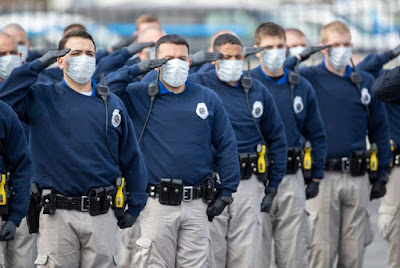 From my perspective, the fault lies much more with the boundless greenfly-strewn horseshit of the now Trump cult-enthralled, illiberal, counter-majoritarian Republican Party with its epistemologically closed media/entertainment complex bubble than it does the failed Neoliberal World Order / Globalist Professional Centrist "Third Way," much less the cultural Marxism of the identity-based WOKE left, however ridiculous. 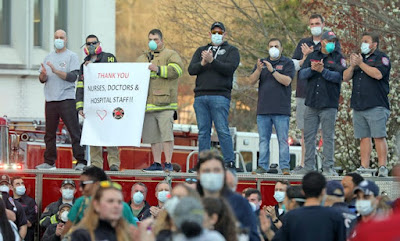 That said, for this entry, let's forget about the deep pathologies and larger societal, institutional, and systemic failures of the past half century that allowed it to come into existence... Nor why, in the end, it's another variation of that fucking North / Jacksonian Confederate South warfare in a different garb. 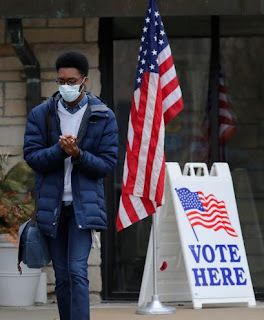 We get it: America, in many ways, has never really left the 19th Century.

And now we're in this SARS-CoV-2-induced COVID-19 ("Chinese flu") pandemic running riot around the world -- and the response to which has put us in a flash economic depression.


I mention all this because I'm not going to write in this entry about Earth Day 50 in the context of the current COVID-19 global pandemic, upon the crest of which we continue to ride one-to-two months into this shit show. 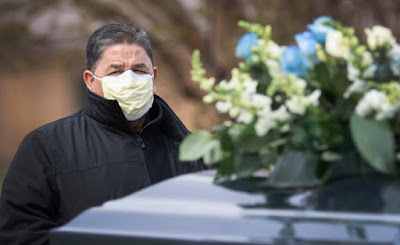 Suffice it say, many of the Earth Day 2020 news articles pointed out how the COVID-19 global pandemic and resulting social distancing economic shutdowns have resulted in startling temporary drops in pollution, especially air pollution, and ecological breathing space for so many of the species with which we share this planet. 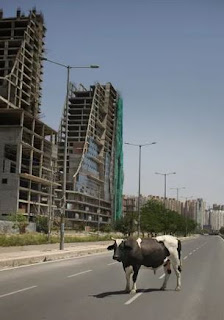 
That original Earth Day on Wednesday, April 22, 1970, occurred in the context of the Vietnam War civil unrest gripping the United States... 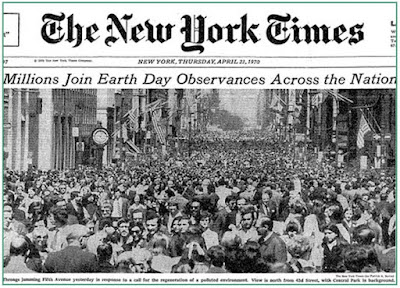 
That quasi-civil war over the Vietnam conflict was itself part of the larger series of societal upheavals stretching back to the assassination of JFK and, five years later, his brother, RFK; civil rights and racial unrest to include the assassination of Martin Luther King; and all the social turmoil. 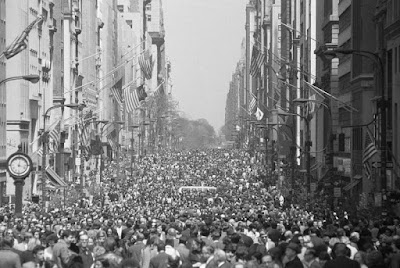 
I was but an infant back in New Jersey, just shy of five months old. 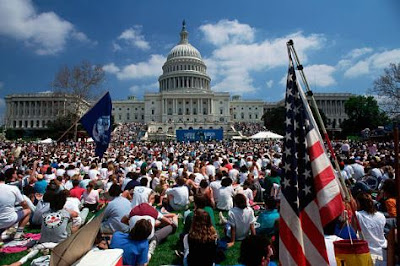 For the 1990 event, I came to D.C. with some friends -- all of whom I still know -- from the college we were all attending, namely, that fucked up nightmare of a place called St. Mary's College of Maryland. 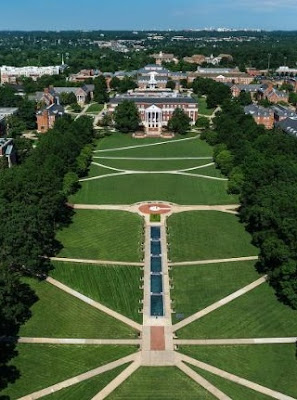 I was already living in Glen Burnie, Md., where my mother and Ray had settled back in 1982, but it was about two years before I first came to the D.C. area, and 2-1/2 years before I moved to College Park to go to the University of Maryland, College Park -- another fucked up place that's part of the sky-trillion BIG ACADEMIA racket euphemistically called American higher education. 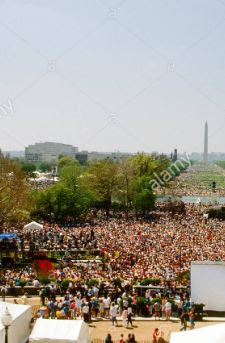 It would be another nearly 8-1/2 years before I moved into D.C. proper, where I've been ever since, except for a six month detour into the Silver Spring suburbs in 2004 / early 2005.

Anyway, on that Earth Day 20, a small caravan of us came up to D.C. from St. Mary's College to the Earth Day event. This included Aaron, Kevin, and Lynda, as well as Eric and Phil (Wall-P).


This entry is not about that long-ago day and its misadventures.
Among the lowlights was that we basically drove off and left Lynda stranded in D.C. -- 70 miles from her dorm -- after having lost her and not having found her by early evening. (This was long before cell phones and portable electronic devices.) She ended up getting a ride from somebody who happened to live in St. Mary's County. 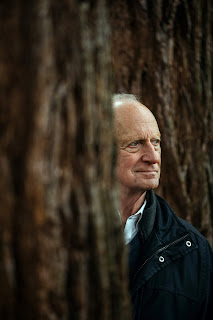 I will note that I actually met Denis Hayes, wholly by chance, at the 1990 event -- on the West Steps of the U.S. Capitol (which you could climb back then in that pre-9/11 era).

I recognized him because he had been featured in a then-print-only edition of the Washington Post Style section a few days earlier.


I know a few of Aaron's photographs from that long ago day survive, including a black and white photo of him standing in the Capitol Reflecting Pool, pants rolled up.
To that point, I found this picture -- showing it was a widespread activity that day: 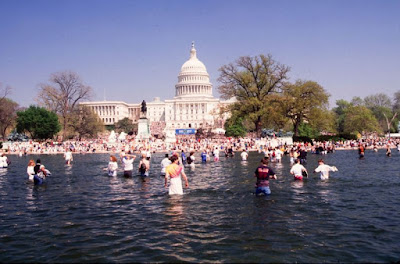 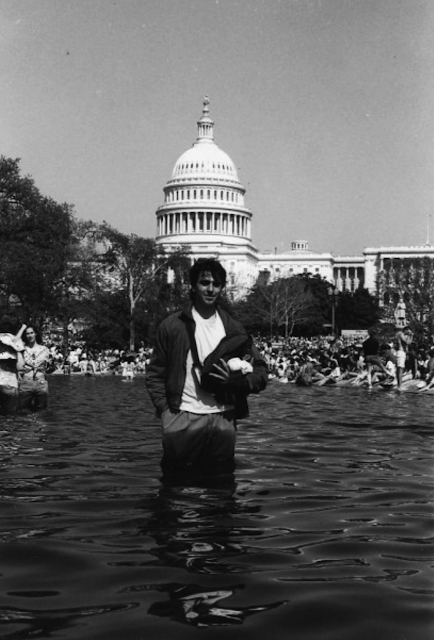 I'm not sure who took the picture but possibly Kevin. I think we had already lost Lynda by that point. Oh, and correction: Aaron did NOT have his cargo pants rolled up.
End of Update.


And that, Reader, FINALLY brings me to the topic of this entry, which is tangentially related to Earth Day: Climate change as circumstantially evidenced -- OK, suggested -- by tree "leaf-out" proxy date. 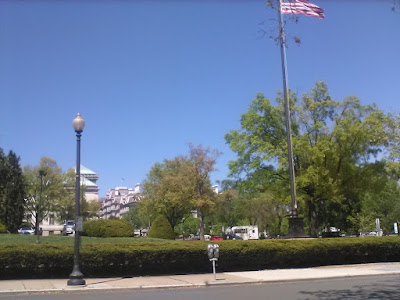 
For comparison, directly above and below are two pictures that I took today near the White House while walking to my office -- one by the DAR building looking north and another on the Ellipse with a view of the Washington Monument. (I wasn't near enough to the Capitol on my walk route to get a picture from there.) 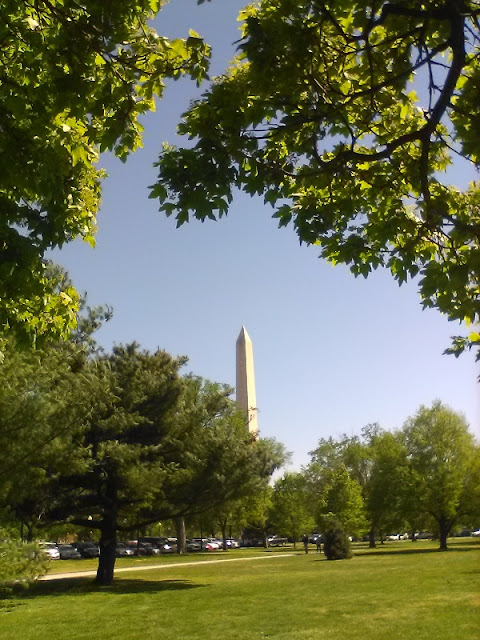 
To me, it looks like the "leaf out" cycle in 2020 is considerably farther long than in 1990, which got me thinking about the climate difference between then and now.
As one more image, below is a picture taken 9 days ago on April 13, 2020 near the U.S. Capitol Building that I found on this site: 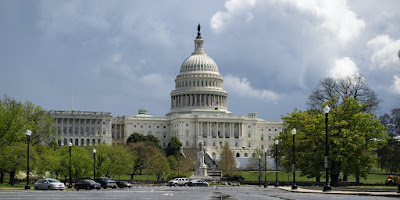 For starters, I looked up to see if spring 1990 was a cold one, but in fact, it was an unusually warm one -- on par with this season's warmth.

Not only was there the 86°F to 89°F heatwave in mid-March that made for the earliest Tidal Basin Yoshino cherry blossom peak ever (March 15th versus March 20th for this year) but it was a warm late winter and spring.

More broadly, below are following averages for the full months of February, March, and April 1990 compared with respect to the 1981 - 2010 base period.

In spring 1990, the base period would have been 1951 - 1980, so the departures likely would have been even higher, but the temperatures themselves are "absolute" values.

Bottom line: There really shouldn't have been any notable difference in "leaf out" cycle dates between 1990 and 2020. But it looks, at least to me, it appears that the leaf out cycle is somewhat earlier this year than it was in 2020.

Apropos of this, Climate Central released this article on April 15th:


It contains the 50-year trend in temperatures since Spring 1970 both for the United States as a whole and a series of American cities to include Washington, D.C.
The period for this technically ends in 2019, but the trend line runs through Spring 2020 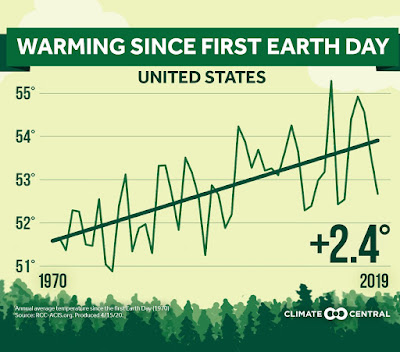 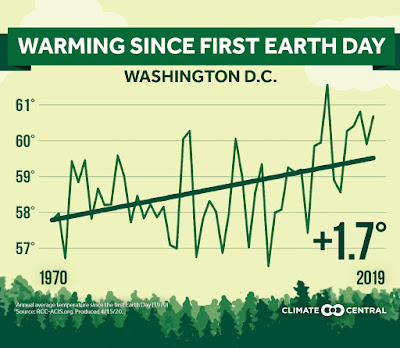 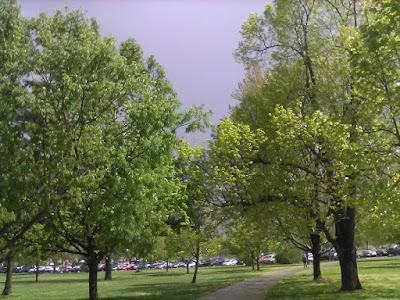 
Where am I going with this? Here: 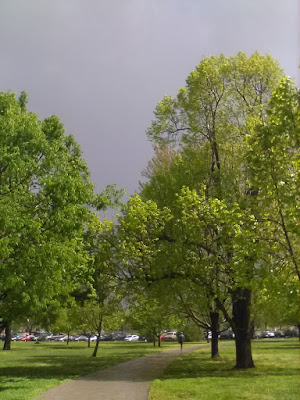 This earlier leaf-out cycle despite no obvious temperature difference between February, March, and the first three weeks of April 1990 and the corresponding period in 2020 -- which I would estimate to be on the order of 7 to 10 days -- is a bit of circumstantial evidence supporting ongoing anthropogenic climate change.

And with that, I'll end this entry...


...Except to say that this entry, as usual, ended up far longer and more involved than I planned.
--Regulus
Posted by Regulus at 10:27 PM