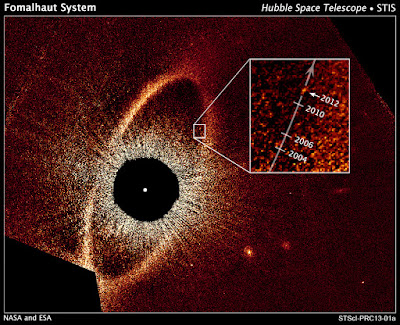 Visible light image of Fomalhaut A and its debris ring with the dazzling star itself coronagraph masked and an inset showing the orbit of what has been dubbed the exoplanet Fomalhaut b, a.k.a., Dagon, over the course of eight years on its highly elliptical 1,700-year orbit about its parent star.
*******


New evidence suggests the suspected expoplanet known as Fomalhaut b that orbits... 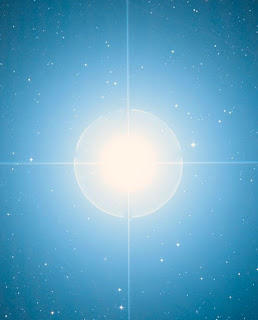 ...Fomalhaut -- the dazzling blue-white star located ~25 light years away from our Solar System and also the brightest star of the Southern Hemisphere sky constellation Piscis Austrinus, a.k.a., the Southern Fish -- is not, in fact, an actual planet but rather a short-lived debris cloud left behind by the collision of two large asteroids or planetesimals.


This sucks precisely because Fomalhaut b, also known as "Dagon" for the ancient Semitic half-man, half-fish deity, was one of the 50 or so directly imaged exosolar planets.
NASA explanatory video of new findings
*******


Indeed, Fomalhaut b was the first one so observed out of the currently known 4,151 exosolar planets. And just to be clear, the 4,151 figure figure is as of April 16, 2020 on the linked NASA / Caltech exosolar archive will change. (The figure will be updated.) 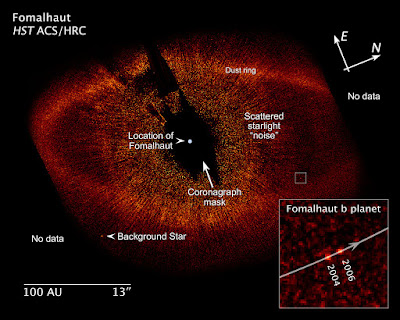 
Now, though, these pesky scientists have come up with a new hypothesis based upon compelling new observations. 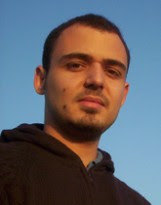 Specifically, astronomers András Gáspár (pictured left) and George H. Rieke of the University of Arizona -- used computer modeling to simulate scenarios that reproduce the object's unusual features observed by the wonderful Hubble Space Telescope between 2004 and 2014. Alas, their conclusion: Fomalhaut b never was a planet, just expanding debris from two colliding asteroids.


As context, HST visible images taken between 2004 and 2006 suggested the existence of this planet. The original findings were announced in November 2008. A bit over four years later in January 2013, additional images from HST's Advanced Camera for Surveys (ACS) confirmed the exoplanet's existence. 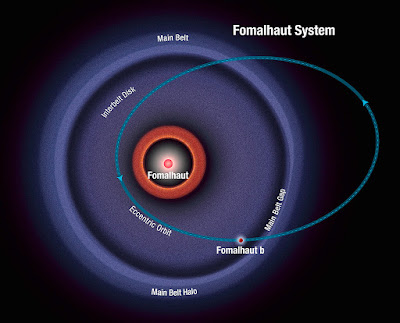 In particular, the findings appeared to confirm the existence of a super-Jupiter-like planet (up to three times the size of Jupiter) at the edge of a circumstellar disk of gas, dust, and debris following a highly elliptical orbit about its parent star -- one with a 1,700-year period that included a 7.5 billion km (~50 AU) periastron and 44 billion km (~300 AU) apastron. 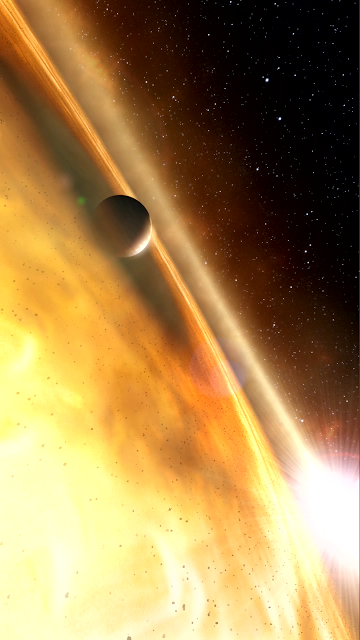 Here is yesterday's New York Times article:
The Case of the Disappearing Exoplanet.

And here is a thorough article from Ars Technica: We may have seen two asteroids annihilate each other in another solar system.

Fomalhaut b was given the formal name of Dagon in December 2015 by the International Astronomical Union (IAU) following a naming contest.


More recently, in response to certain observed oddities in the suspected exoplanet, such as its notable lack of infrared (thermal) emissions -- which would be expected for an object orbiting a star as young as its parent -- Dr. Gáspár examined additional HST / ACS images through 2014, the object had more or less expanded and faded away. 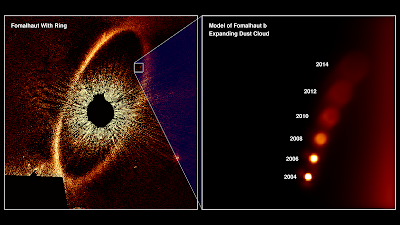 At this point, I'll just post the entire abstract from the Proceedings of the National Academy of Sciences -- along with two images, one of which is another version of Fomalhaut, its dust ring, and scattered "starlight" noise that give it that "Eye of Sauron" look:
The apparent detection of an exoplanet orbiting Fomalhaut was announced in 2008. However, subsequent observations of Fomalhaut b raised questions about its status: 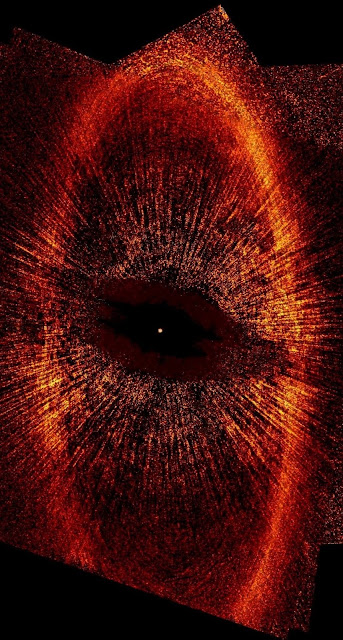 Unlike other exoplanets, it is bright in the optical and nondetected in the infra-red, and its orbit appears to cross the debris ring around the star without the expected gravitational perturbations. We revisit previously published data and analyze additional Hubble Space Telescope (HST) data, finding that the source is likely on a radial trajectory and has faded and become extended. Dynamical and collisional modeling of a recently produced dust cloud yields results consistent with the observations.


Fomalhaut b appears to be a directly imaged catastrophic collision between two large planetesimals in an extrasolar planetary system. 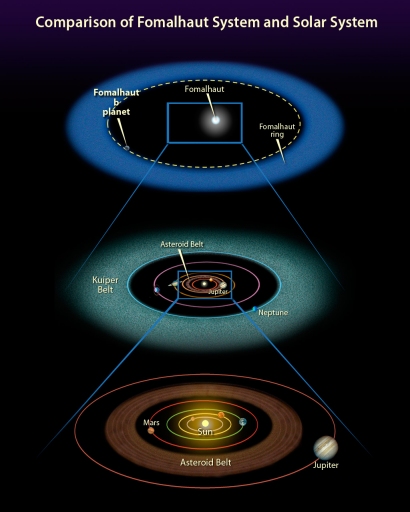 Similar events should be very rare in quiescent planetary systems of the age of Fomalhaut, suggesting that we are possibly witnessing the effects of gravitational stirring due to the orbital evolution of hypothetical planet(s) around the star.
Phooey. Or rather, Da'gon it ... 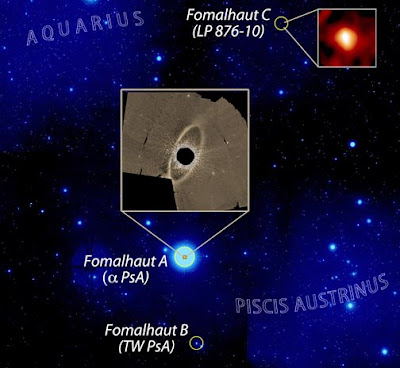 As or Fomalhaut, I just like the name and saying it. Apparently, the name means "Mouth of the Fish" in Arabic. 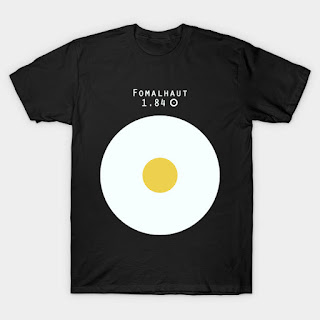 
Fomalhaut, as the brightest star in its constellation, is designated as alpha PsA (or for short, α PsA). 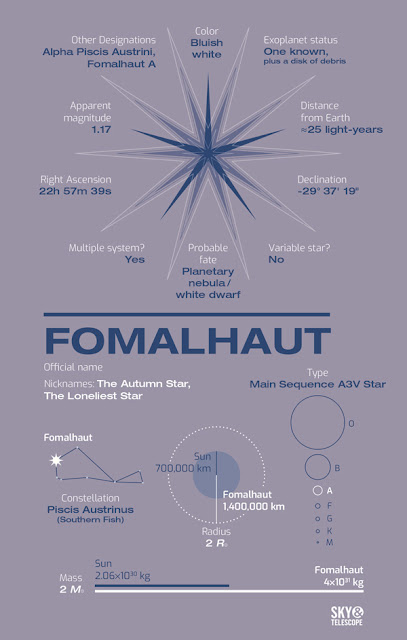 
It is also called Fomalhaut A because the star is actually part of a gravitationally-bound triple star system to also include a star similar in ways to our Sun, namely, yellow-orangish TW Piscis Austrini (TW PsA), a.k.a., Fomalhaut B (but not to be confused with the lower-case "b" of Fomalhaut b), and the red dwarf star P 876-10, a.k.a., Fomalhaut C. 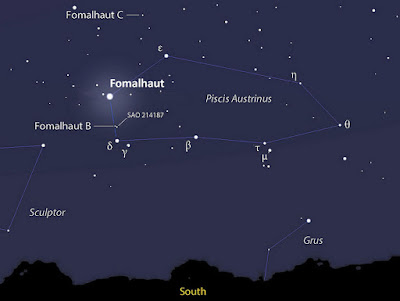 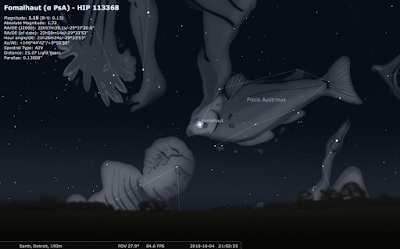 Very cool. Astronomy is so awesome. Oh, and did I mention, I love the name Fomalhaut.
--Regulus
Posted by Regulus at 12:58 PM