The Fear in the Time of the COVID-19 Pandemic and Panic: Trump Makes Some Sense 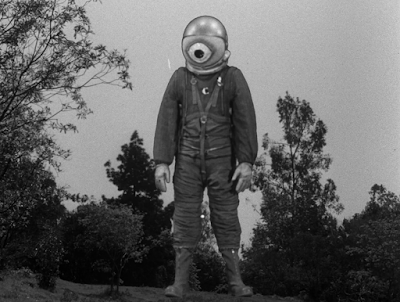 Last night, among the many TV shows I viewed and while drinking a few too many vodka drinks (none tonight), I watched the penultimate (second-to-last) episode of the original Twilight Zone series called "The Fear" ... It jointly starred an interesting actress, the late Hazel Court, and the long-time prolific actor Peter Mark Richman (still alive at age 92).
Without going into details on the episode, there is the potential for a rich vein of analogy and symbolism in the unknown "thing" that is terrifying them and what it turns out to be and our current society-wide situation. 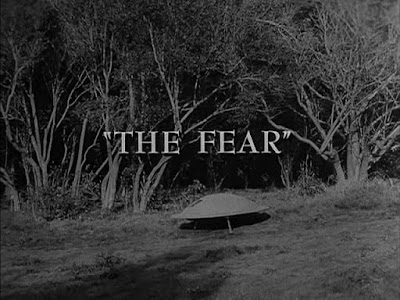 This brings me to my nightly entry during this time of the coronavirus pandemic, panic, and suffocating and economically devastating shutdown of large segments of American society, not to mention what's going on globally.
For this entry, I have to say I find myself, and despite myself, in agreement with Donald Trump and the increasingly prevalent Republican view that Trump himself -- yes, I'm quoting Donald Trump -- said at today's hour plus news conference: 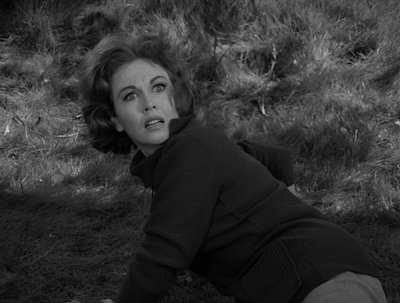 "Our country wasn't built to be shut down," Mr. Trump said during a briefing at the White House. "America will, again, and soon, be open for business. Very soon. A lot sooner than three or four months that somebody was suggesting. Lot sooner. We cannot let the cure be worse than the problem itself."
This Business Insider article quotes him as saying: 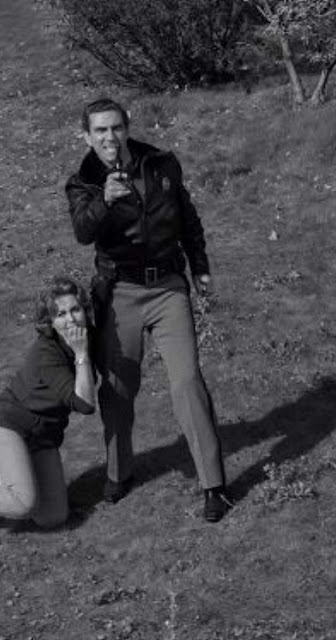 "Don't forget the doctors. If it were up to the doctors they may say, 'Let's keep it shut down, let's shut down the entire world,' because again, you're up to almost 150 countries... 'So let's shut down the entire world. And when we shut it down, that'd be wonder-ful, and let's keep it shut for a couple of years' ... You know we can't do that ... you can't do that with a country ... Because well, it causes bigger problems than the original that's why I talk about the cure being worse than the problem. We can't have the cure be worse than the problem." 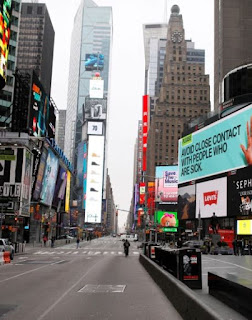 Similar views are emanating from parts of corporate America, where companies are struggling with a shutdown that has emptied hotels, airplanes, malls and restaurants and sent the stock market tumbling so fast that automatic circuit breakers to halt trading have been tripped repeatedly. Stocks have collapsed about 34 percent since the coronavirus spread globally — the steepest plunge in decades — erasing three years of gains under Mr. Trump. 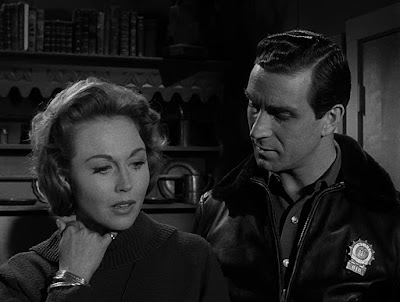 
I really don't see how collapsing the economy and stock market to counter what is, yes, a harmful SARS-type outbreak, but not an Ebola or bubonic plague type situation, to say nothing of a zombie apocalypse.
It's hard to overstate how big the economic collapse has been in the past few weeks. The unemployment rate -- which officially on the U-3 rate has been hovering around 3.5 percent for the past six months -- could very well spike almost immediately (has already) into the 10 to 15 percent range. 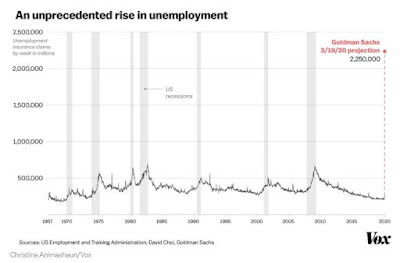 From Vox: Weekly unemployment claims chart back to 1967 with middle March 2020 Goldman Sachs estimate ...
As the Vox article notes, this ten-fold increase, if it comes to pass, would forever screw up the chart scale.
*******


The second quarter GDP figure could collapse by a quarterly record -- possibly greater than the 10% drop back in the first quarter of 1958 (that is a figure not adjusted for inflation). (The inflation adjusted one (in 2012 dollars) is 12.89%, according to this site.)
This article contains some forecasted figures -- some of which are indeed "unrecognizable." 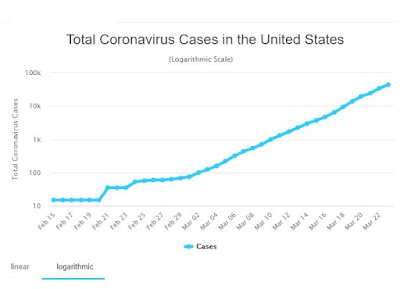 Having said all that, yes, it is true that we are presently in the sharply upward portion of that damn logarithmic or exponential curve, but my hunch is (fwiw) is if you could instantly test all 329 million Americans, you would find that our current coronavirus outbreak, SARS-CoV-2, and its "COVID-19" manifestation is already very widespread. 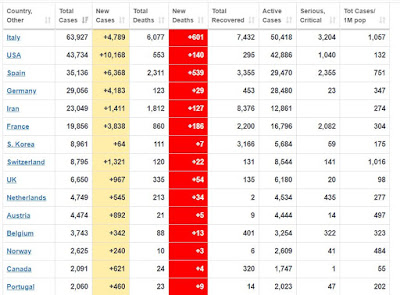 
It's just that the bulk of the infected are asymptomatic. Instead, only those who are really sick or, alternatively, an asymptomatic celebrity, multimillionaire, and/or political figure and thus have been able to get tested with these impossible-to-find test kits -- and of those, the mortality rate is in the 1 to 3 percent range even while the true mortality rate is much lower.
Again, that's just my hunch ... And I'm not in any position of responsibility over health matters, public or private, except my own. 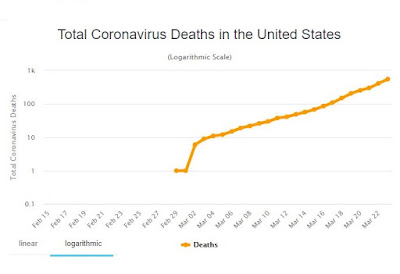 And, yes, "doing nothing" could certainly create a catastrophic situation among the elderly and susceptible.
On the other hand, the current extreme social distancing measures -- while perhaps necessary for an additional 2 to 4 weeks -- cannot be kept up "until further notice" ... The economic destruction and resulting social mayhem is too great ... Or as Trump (yes, Donald Trump) said, that cure is worse than the problem itself. 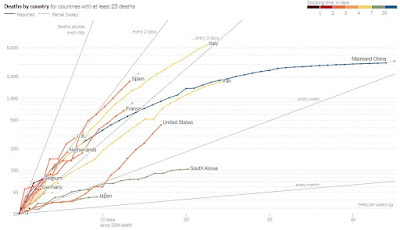 
Here is an article from POLITICO by Tina Nguyen that sort of sums it up: (link embedded): A new MAGA movement debate: Is Trump overdoing it?
Here was the key part: 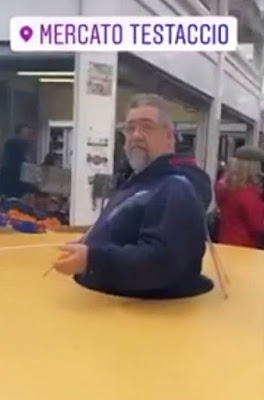 "More than a month of people actually quarantined will break down civil society. Nobody is used to this, and when the money runs out for people they will get desperate -- and there's not enough money the govern-ment can dole out that’ll be enough," said David Reaboi, vice president for strategic operations at Security Studies Group who writes for The Federalist.


"People will start to panic, then [begin] killing and looting. And we'll face a society-wide crisis that's more than simply economic. Absorbing the death of a certain number of people is preferable to that, if those are the options. Amazing and horrible to even think like that, but here we are."
Yes, the right can be apocalyptic in its ruminations, but still. 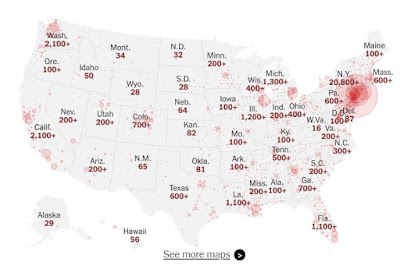 These blanket state-level orders from certain (Democratic) governors -- in Washington, New York, and California, among others -- that ban all non-essential outdoor movements, excepting people going out for walking and exercise, are simply not sustainable for long periods of time, and by "long time," I mean more than three to four weeks -- unless it is obvious that there is a massive wave of (i.e., hundreds of thousands of) fatalities, which is unlikely. 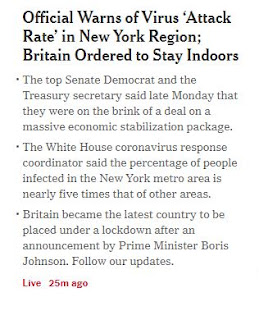 It is true that New York is a particularly bad hot spot for the outbreak right now with 7,000+ new cases and about 70 deaths in just the last day or so. I'm not posting tallies since they are changing so quickly but the Worldometer aggregation site indicates the present U.S. total is 46,145 with 582 deaths.


Half of the cases are New York state, which really means in and around New York City.
My point is, even 1,000 deaths a day is not a lot in a country of 329 million -- not enough to blow up society. 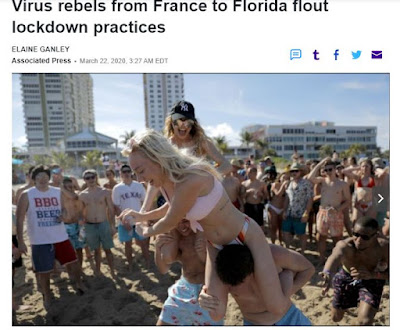 On the flip side, here is a useful New York Times article from Sunday (link embedded): The Virus Can Be Stopped, but Only With Harsh Steps, Experts Say.
The above article had this image and the following caption with it: 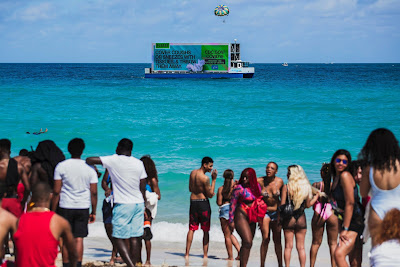 Spring breakers this month in Miami Beach, where there wasn’t much social distancing.
I don't think I've ever seen the New York Times do British-style subtle but cutting snark before in its news section.
*******


On a more upbeat note, here is an article from the Los Angeles Times (link embedded): Why this Nobel laureate predicts a quicker coronavirus recovery: 'We're going to be fine'
The Nobel laureate here refers to Michael Levitt, a Stanford biophysicist. 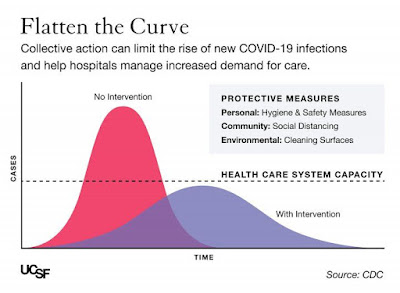 On a personal level, the "social distancing" aspect of the present situation is as weird as seeing a semi-abandoned Washington, D.C., and all those people wearing masks (few, if any, of which are the N95 sort) ... Some people (especially women) are crazy about the social distancing -- to the point of standing in streets at otherwise-nearly empty intersections instead of on the sidewalk. 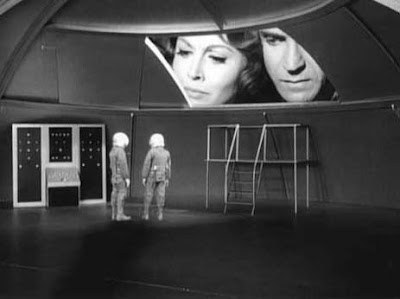 As for me, I guess I've reached a sort of daily and nightly rhythm of life ... Most of it involves being by myself, exceptions being a lot of emails (work), texting (especially Gary and Chris T), and even phone calls (nearly 2-1/2 hours combined with Chris and Mike this past weekend).
OK, at this point, I am going to post my second entry tonight since it is just a personal update.
--Regulus
Posted by Regulus at 11:58 PM