Strolling Among Half-Toppled, Still Fully Ornate Gravestones for Long-Dead People: A Visit to Washington, D.C.'s Holy Rood Cemetery On a Spring Day in 2020 -OR- Walking Distance Only 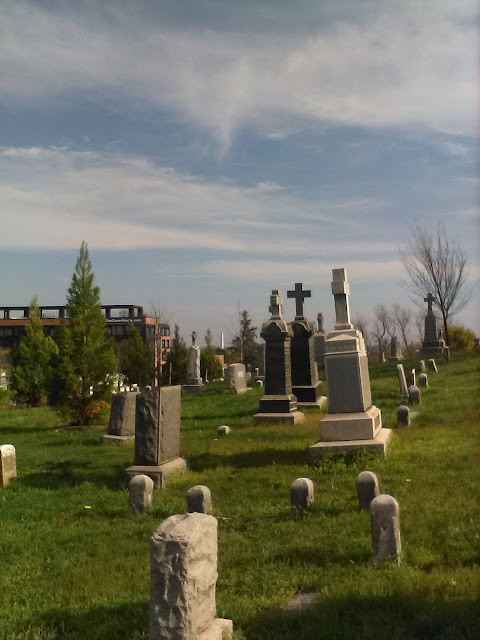 
On this Sunday, I took a lengthy walk -- in all six to seven miles, I guess -- on a route that took me across Georgetown to the university, thence up 35th Street to Wisconsin Avenue, and then back through Georgetown, past my apartment and over to Fred & Doug's place for our Sunday night dinner party soiree with them, myself, and Aydin, and then back home.
Yes, we're still doing the dinner parties during this COVID-19 pandemic. I think that's OK. 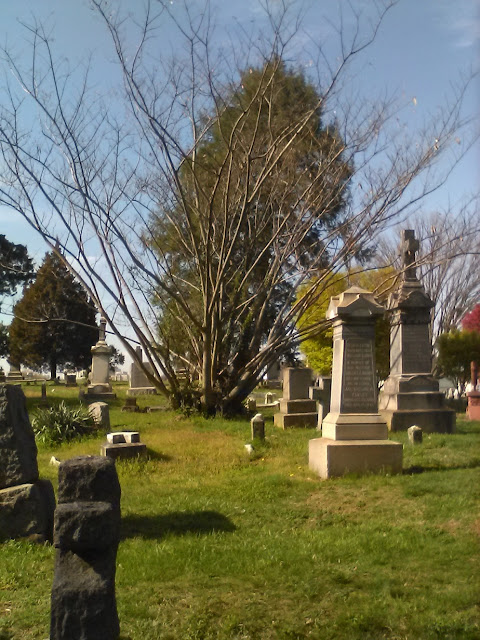 Anyway, as part of my walk, I climbed up the steep, kinda muddy hillside -- well, it's really more of an embankment -- from Wisconsin Avenue into Holy Rood Cemetery, a place I've visited a number of times over the years on such walks.
About the cemetery, here is a summation from its Wikipedia page: 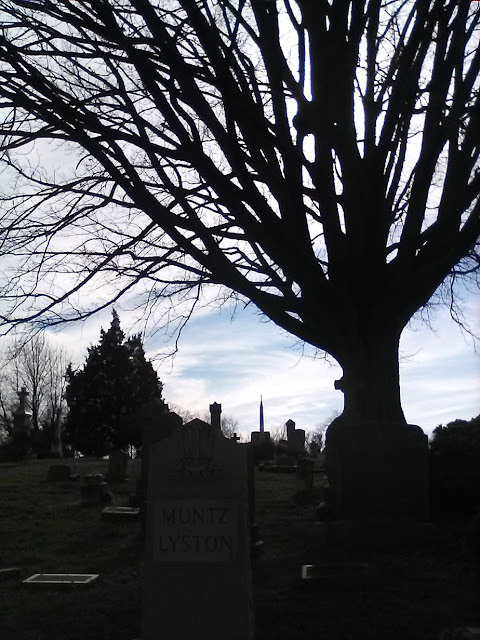 Holy Rood Cemetery is located at 2126 Wisconsin Avenue NW at the southern end of the Glover Park neighborhood of Washington, D.C. It stands at one of the highest elevations in Washington, D.C. and has memorable views. Holy Rood Cemetery contains approximately 7,000 graves, including as many as 1,000 free and enslaved African Americans, and may be the best-documented slave burial ground in the District of Columbia. At the western edge of the cemetery is the grave of Joseph Nevitt, a veteran of the American Revolution. 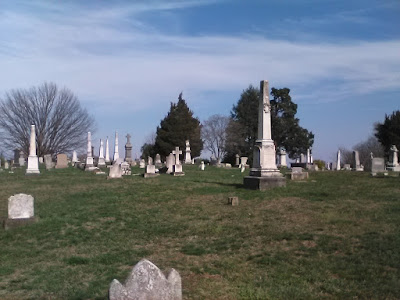 Burials stopped there for good about 35 years ago, but most of the dead were buried in the 19th and early 20th Centuries. Indeed, my odd motivation for going there was to find a particular tall gravestone where multiple young members of a family are buried -- the deaths all having occurred in 1918 or 1919, and which I surmise was due to the Spanish Influenza pandemic.
Given what's going on now, finding that gravestone somehow seemed an appropriate thing to do.
In the end, though, I couldn't find it -- and it's possible that I saw it in another cemetery. 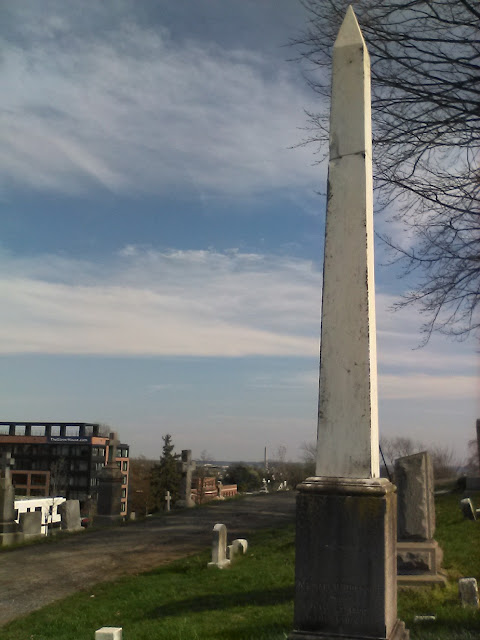 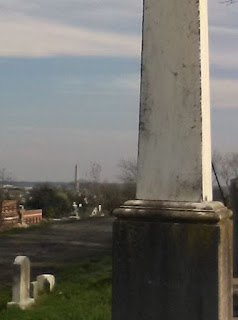 Unfortunately, high clouds were dimming the Sun at that point, so the whiteness of both of these monuments is dulled out.


The cemetery is in bad shape with the ground having shifted all kinds of ways and more than a few of the ornate gravestones toppled over. Indeed, it almost appears as though the "hill" on which the cemetery is located isn't even a natural hill -- but some sort of fill, which would be so wrong.
The above-linked Wikipedia article further states (and the pictures below are from that article): 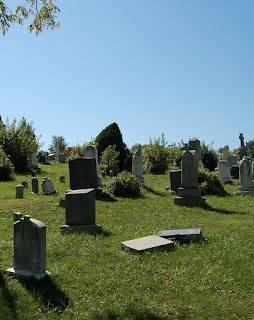 The cemetery is owned by Georgetown Uni-versity. In the 1980s, the university explored the possibility of dis-interring the bodies buried there so that the land could be put to other uses, but was blocked by a legal action brought by the remaining holders of burial rights. The cemetery reflects years of disuse and neglect.


Many of the tombstones are toppled, damaged or overgrown, and grass grows up through large cracks in the asphalt walkway leading through it. 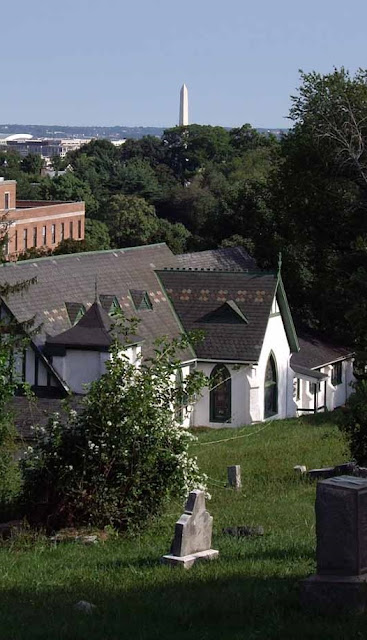 In 2018, Georgetown University and the Holy Trinity Catholic Church announced plans to restore the historic cemetery.

The cemetery, which has been closed to new burials since 1985, is constructing a columbarium to hold cremated remains. The columbarium, which will hold the remains of parishioners, Uni-versity alumni, faculty and staff, those who have ancestors inter-red at Holy Rood, will open in late 2019.


There is a good deal of construction work taking place at the north end of the cemetery but clearly the 2019 opening date wasn't met. 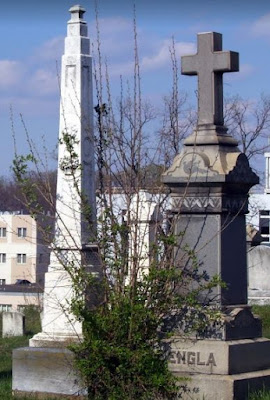 According to this info on the Holy Trinity Catholic Church website:

Holy Trinity and George-town University have announced a plan to restore Holy Rood Cemetery on Wisconsin Ave, including repairs to existing infrastructure, enhancements to land-scaping, and improve-ments to the cemetery entrance. The plan will also allow Holy Trinity to build a columbarium at the cemetery.


What the hell is a columbarium? Sounds like a periodic chart element -- you know, the sort way at the bottom of it.
Transitioning topics, as I wrote this while watching one of my favorite three episodes of the original Twilight Zone series: "Walking Distance." It is the fifth episode of the first season.
The IMDb plot is as follows: 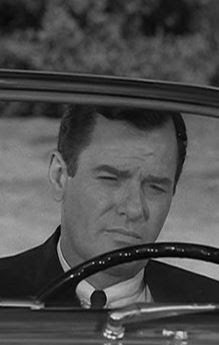 The busy and stressed VP of an ad agency, Martin Sloan, stops his car at a gas station. When asked the attendant tells him it will take about an hour to change the oil and perform a lube job. In the meantime Martin realizes he is 1.5 miles away from Homewood, the hometown he left 25 years ago and decides to walk there. Soon he finds that he has returned to the past; where he finds his 11 year old self and his parents.


Sloan takes a journey actual or maybe just in his mind -- remember that this is The Twilight Zone -- back in time to his carefree childhood and tries to talk to his childhood self and his parents, except as a 36-year old man (yes, I see the connection to the 36 year old man's grave mentioned above). 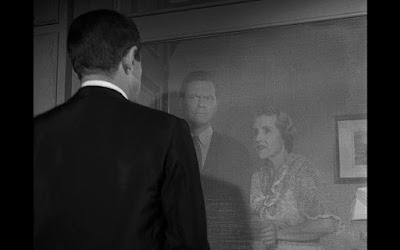 Gig Young as Martin Sloan showing up at the door of his parents, played by Frank Overton and Irene Tedrow, 25 years in the past
*******


Needless to say, that doesn't go so well -- his mom ends up smacking him when he starts recounting all these things that a stranger at her door shouldn't know, yet in some way, they can see the resemblance to their young son -- but the dialogue he has with his father (played by actor Frank Overton) is profound. 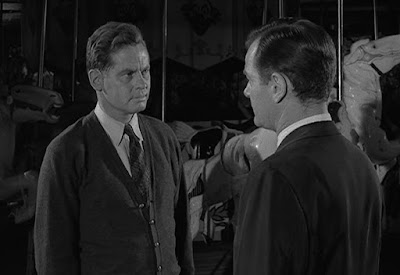 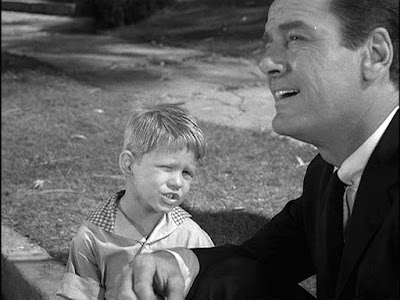 A very young Ron Howard is in it -- see image directly above -- and if I'm doing my math correctly, he was 5 years old.
As for Gig Young, the actor who played Martin Sloan, his real name was Byron Elsworth Barr and he was born on Nov 4, 1913, coincidentally my paternal grandmother's fifth birthday. 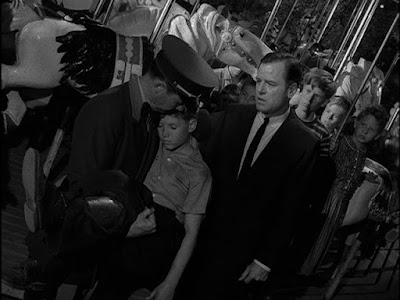 Born in St. Cloud, Minn., Young spent part of his youth here in Washington, D.C. -- even attending back in the late 1920s what was McKinley Technical High School, itself replaced with McKinley Technology High School and in a different location -- and part of it in Waynesville, N.C. 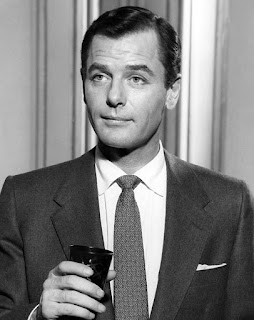 Gig Young had a horrible personal life that ended in what appears to have been a murder-suicide with his fifth wife. He died at age 64 in Oct 1978.

His third wife was actress Elizabeth Montgomery of Bewitched fame, but they had no children. He had one daughter by his fourth wife.


Gid Young's chronic alcoholism ruined his acting career -- even his role as the heard-but-never seen Charlie in Charlie's Angels. That role went, of course, to John Forsythe.
OK, that's all for now. I suspect there will be a lot of very bad and dramatic news about the COVID-19 pandemic this week. I'll just leave it at that right now and watch my late night old TV shows here in my little apartment.
--Regulus
Posted by Regulus at 11:52 PM