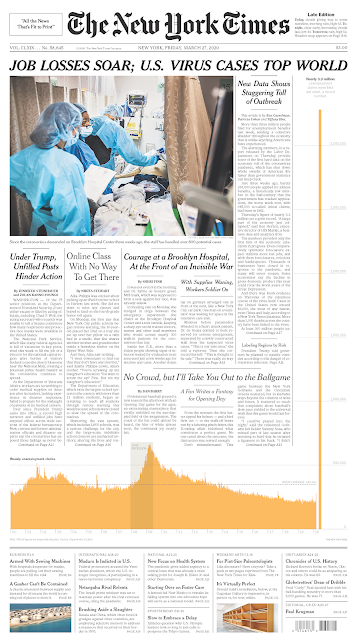 Image of the New York Times print edition front page for March 27, 2020 during the COVID-19 pandemic with a chart showing weekly initial unemployment claims; click on image for larger version.
By way of explanation, the orange-yellow time series chart shows weekly unemployment back to January 2000. The previous peak of ~665,000 initial claims occurred just about 11 years ago to the day in March 2009 -- that is, until last week and its 3.28 million initial claims.
With last week's numbers, the chart scale doesn't even make sense. More on this below.
******* 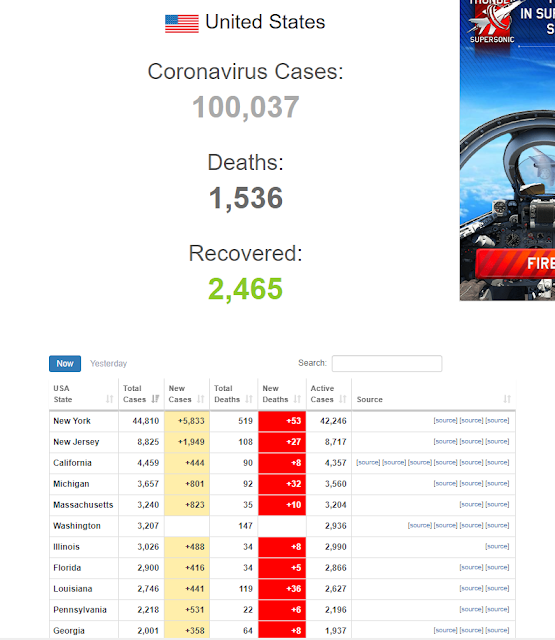 
There's so much going on right now …
The COVID-19 pandemic as a result of novel coronavirus SARS-CoV-2 is accelerating into a scary new place here in the United States. This is especially the case in and around New York City to include parts of New Jersey, as well as in other hot spots such as New Orleans (as a result of ill-advised Mardi Gras festivities last month). 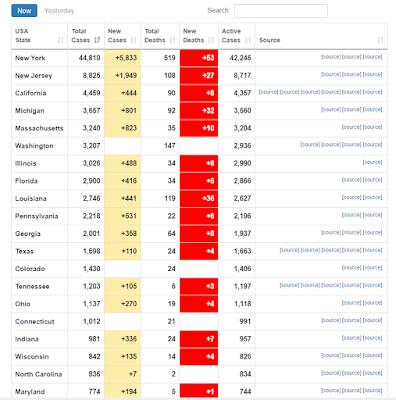 
And, yes, I was wrong in this entry that I wrote early last week when I was initially flummoxed and upset about all the social (physical) distancing efforts. I apologize. (This is precisely why I am glad that I am not in any position of actual responsibility for others.)
About that, here is a useful video by Kurzgesagt, the German animation studio, on COVID-19, that was quickly produced and released a few days ago:
Original source here. I'm unsure who is the British narrator, but it's a very worthwhile primer video to watch.
Speaking of the UK … 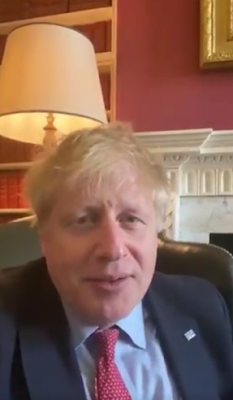 It turns out that British Prime Minister Boris Johnson contracted COVID-19 and, he says, he is mildly symptomatic, along with other members of his government.

He should recover without much trouble given his age (55) and health (good), but he's obviously self-isolating. 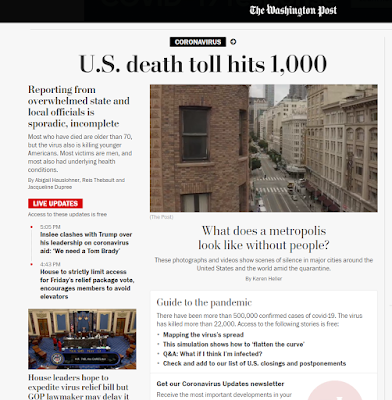 
As some of images above suggest, the number of known cases in the U.S. (yesterday) surpassed China's total and, what's more, today zoomed across the 100,000 threshold -- probably on its way into the low millions range by mid-April -- and the number of deaths rushed past 1,000 to over 1,500 today (on its way into the tens and hopefully not hundreds of thousands) with, again, NYC as the epicenter. I say "known cases" as opposed to total cases, which we'll never know. Having said this, I should point out that the situation is nothing less than catastrophic in Italy with 9,100+ dead to date. 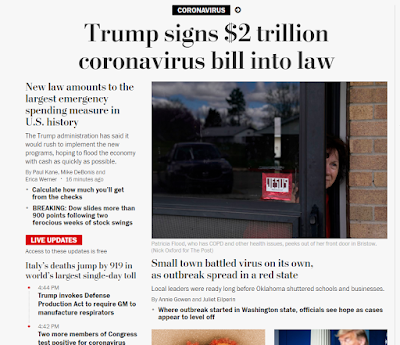 
Congress also passed with astonishing speed and near-unanimity in both chambers the $2 trillion Coronavirus Aid, Relief, and Economic Security (CARES) Act that, AOC's tinny-sounding complaints notwithstanding, is an incredible and historic piece of legislation. It passed the Senate passed unanimously, 96-0, and the House 419-6, and President Trump immediately signed it. (Yes, I know there are 100 Senators and, no, I don't know where the other 4 were.)
This may not be enough to avoid a protracted economic depression -- a flash one of which we are already in -- but it's a start. 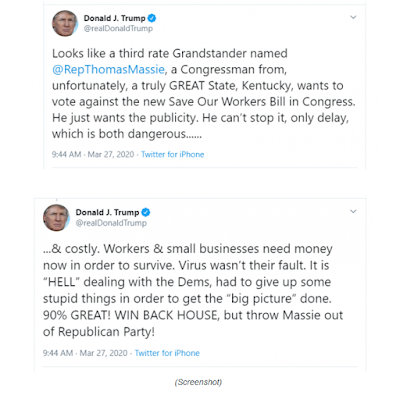 Trump tweet-unloading on Rep. Thomas Massie (R - Cockhead shit-hole)
To be clear, Trump knows that he needs this bill to salvage the economy -- and help ensure his reelection. Yes, it's transactional, but at this point, that doesn't matter. The fact that Massie had his lips locked to Trump's ass for the last few years mattered not a whit to Trump.
*******


The House did so despite the life-threatening grandstanding assholery of Thomas Massie -- a moral and ethical dickhead of human being whose political career hopefully is now over -- who forced Members to fly back last night as vast cost and public health danger because of his "Constitutionally-principled" horseshit about a quorum and voting. 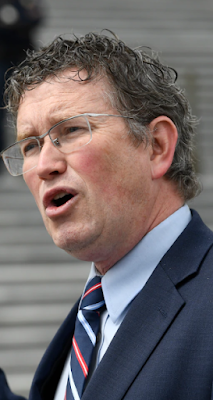 In this manner, Massie endangered their health (already a number of Members have tested positive) and their staff and others.

About Massie, I may write more about that libertarian cocksucker in a later entry.

Suffice it to say he earned Trump's ire -- a poetically just end for his ass-wipe. In fact, if you want to see what happens when the GOP turns on one of its own, read this POLITICO article.


This is true even if, as Dana Milbank correctly offers, this dick-bag is the monster they themselves created. To be clear, I agree that Massie is the end result of normal-times GOP horseshit, but it wasn't going to work in a genuine emergency that endangers Republicans and everything they care about, too. 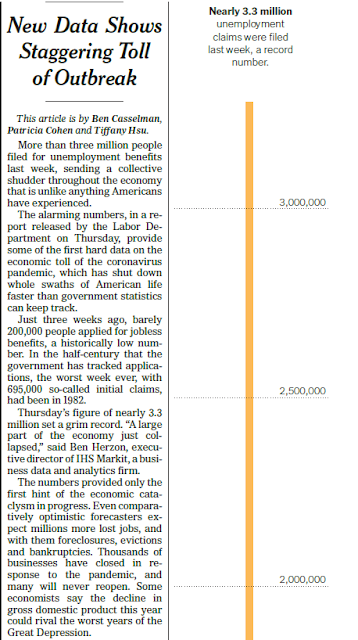 New York Times print edition front page article on the COVID-19 pandemic-related explosion in unemployment due to the mass closure and resulting flash crash of the U.S. economy during the week of March 14 - 21, 2020.
And in case you are wondering: The New York Times is, even in the year 2020 (and whether you like it or not), the "newspaper of record" of the United States of America. What's more, the print edition is the sort of Moses-with-the-Ten-Commandments stone tablets version. And THAT'S why I make a fuss about its headlines and stories.
******* 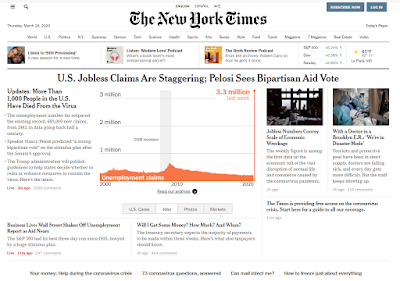 Another image of initial unemployment claims as shown in the NY Times -- this one from online version yesterday.
Just FYI, if you extended the chart back to 1967 (when such record-keeping began), it would show that the highest initial claims ever was toward the end of the 1982 recession with an all-time record peak of 695,000. This means the 3.28 million claims last week surpassed even the 1982 peak by a factor of nearly five, AND was 11 TIMES (i.e., ONE FULL ORDER of magnitude) higher than the previous week's half-century low of about 200,000.
The Feb 2020 U3 unemployment rate of 3.5% could very well, at least briefly, spike into the Great Depression bottom levels of 25 to 30% range -- if it hasn't already. I agree with this Fast Company article that his New York Times print edition front page is likely to become one of those historic newspaper images. 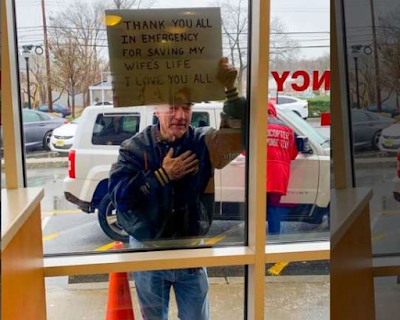 A very touching photo of a man with a sign at the backside door to Morristown Medical Center in Morristown, N.J., sometime in the past week or so.
*******


I'm in the office now (solo, of course, as no one has been in this little wee office in 490 L'Enfant for the past 10 days) and about to walk home. Remember that my workspace is not directly onsite with the federal client (everyone has to telework now anyway), and my office only regularly has three people in it anyway, myself included.
Both yesterday and today, I also walked here from my Dupont Circle area apartment to come into the office mid-afternoon, as has been my wont this past week.
Yes, I still take the Metro, but last night as I rode it from L'Enfant Plaza to Farragut West, it seemed so gross and, honestly, vector-riddled in its nearly deserted condition, by which I mean the people who are still taking it.
Oh, by the way, I found that if I walk down Connecticut Avenue to the east end entrance of Farragut West, rather than zig-zagging on 20th and 19th Streets NW to the west end entrance of Farragut West, it's fine. Having said that, today I actually walked nearly due south into Foggy Bottom and thence to the Mall -- right past and physically touching the Washington Monument -- to this office.
OK, that's all for now. I do intend to post another and longer entry tonight from home while watching my MeTV / Antenna TV / Cozi TV nighttime comfort television.
--Regulus
Posted by Regulus at 9:28 PM