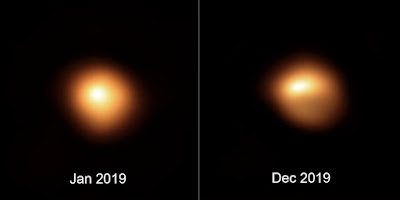 This past Friday, the European Southern Observatory (ESO) released a stunning side-by-side comparison of images of Betelgeuse -- both by ESO’s Very Large Telescope (VLT) at Cerro Paranal in Chile using the Spectro-Polarimetric High-contrast Exoplanet REsearch ("SPHERE") instrument, one taken fortuitously in January 2019 and another intentionally in December 2019. The result is the astonishing "before" and "after" dimming images of the surface (or very near surface region) of Betelgeuse. 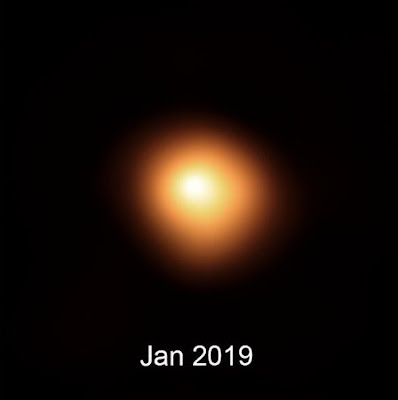 The most notable feature is the change in physical shape of Betelgeuse -- and the fact that the star has preferentially dimmed on its lower half. It is unclear if that dimming is intrinsic to the star itself -- as in some sort of massive convective cell -- or if it is surrounded by a close-in cloud of dust, or a combination.
The Dec 2019 images were made by a team led by Miguel Montargès, an astronomer at KU Leuven in Belgium. 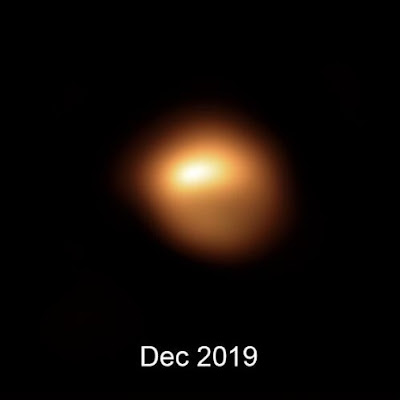 About Betelgeuse, remember that this monster red supergiant star -- although located with a best estimate distance of 642 light years from our Solar System -- is so ginormous that larger telescope arrays such as VLT can make out Betelgeuse's surface (photosphere). And if you plopped Betelgeuse down where our dear Sun is located, the star would extend somewhere into the Asteroid Belt -- and potentially to the orbit of Jupiter, as shown in this schematic: 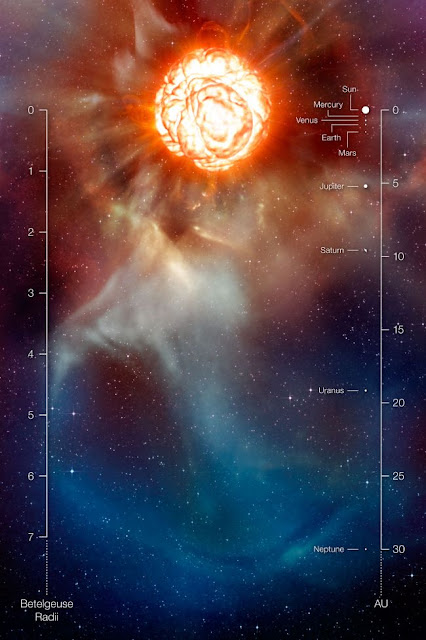 Of course, a star that massive and so late in its stellar evolution, is ejecting so much material that it isn't exactly clear where the "surface" begins. Nor is the star a typical spheroid but instead is a seething caldron of convective cells, each spanning an appreciable fraction of the photosphere. 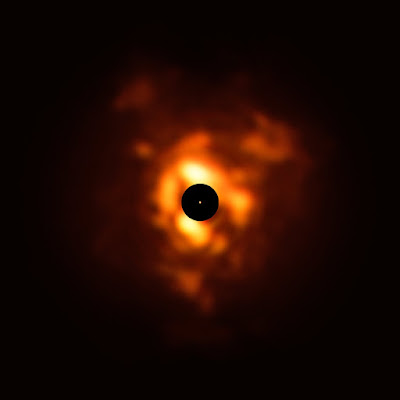 ESO also released (in the same news release) this image (directly above) obtained with the VLT Imager and Spectrometer for mid-Infrared ("VISER") instrument on VLT showing infrared emissions from the dust surrounding Betelgeuse in December 2019. These observations were made by a team led by Pierre Kervella from the Observatory of Paris in France.

Haha …
In the above VISIR image, the black disc obscures the star's center and immediate surroundings. This is so the much fainter dust plumes can be seen. The orange dot in the middle is the SPHERE image of Betelgeuse’s surface, which again is equal to the size of the orbit of Jupiter from the Sun. 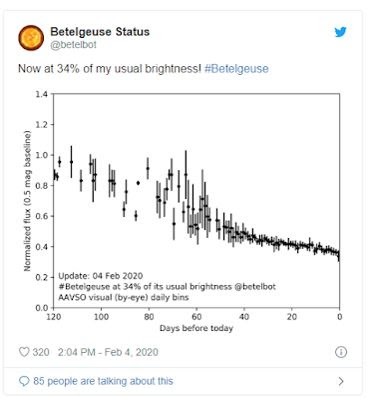 
As for the dimming, Betelgeuse appears to have stabilized at its current 36 percent of normal brightness -- not having gotten any dimmer in the past ten days (and should start to brighten). This is according to Villanova University astronomer Edward Guinan, who has been carefully following the star's dimming during the past several months. 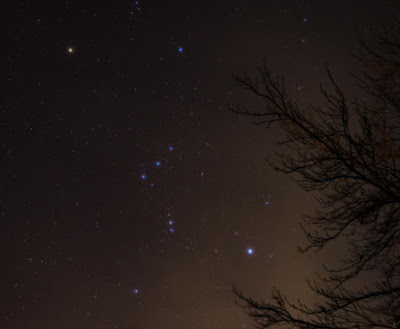 All of this is so newsworthy because this star -- in its end-stage death throes -- will go supernova at any time, which as a practical matter, means anytime between ow and a few hundred thousand years hence. 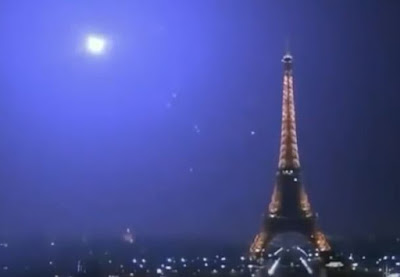 And what an indescribable sight it will be, one that profoundly influences civilization, but it is at a sufficient distance to keep the star from being any real danger to Earth when it goes supernova, although it also helps a lot that Earth isn't staring down the star's axis of rotation. 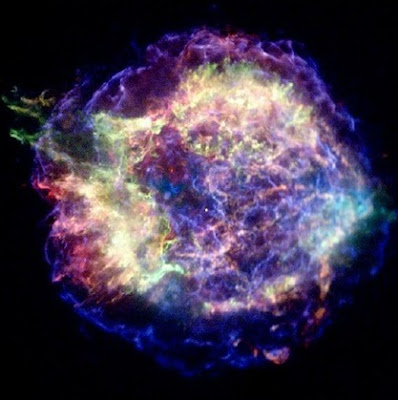 It will then fade away to invisibility, the expanding shocked front of ionized gas and dust surrounding the remaining neutron star (Betelgeuse not massive enough to result in the formation of a black hole) probably too dim to see from Earth except through telescopes even as those elements seed the interstellar region lightyears around where the star once was.
--Regulus
Posted by Regulus at 3:38 AM