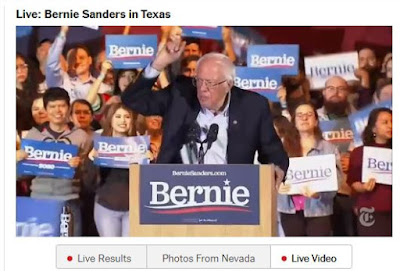 As some political news, as expected, Bernie Sanders won big in the Nevada caucuses tonight.
With about one-quarter of the precincts reporting, Sanders leads the county convention delegate total with just over 47 percent of the total to his nearest rival -- Joe Biden, who has a bit over 23 percent. 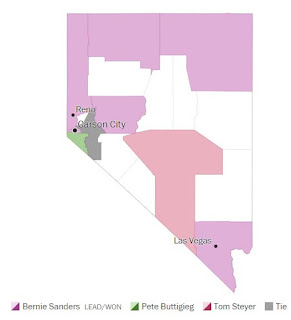 There is also a first and second (final) round popular vote totals with the current figure (see below) showing Sanders at 14,492; Biden at 8,145; Buttigieg at 6,083; and Warren's 3,748. To be clear, I'm finding multiple, widely varying numbers for vote totals even with similar percentages reporting.


That side, I'm not sure how each news outfit is calculating these results. 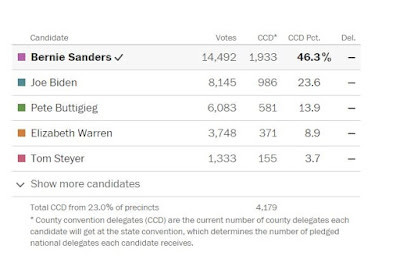 God, caucuses are stupid.
Anyway, this win definitively cements his position as the early Democratic presidential candidate front-runner despite a still-crowded field. 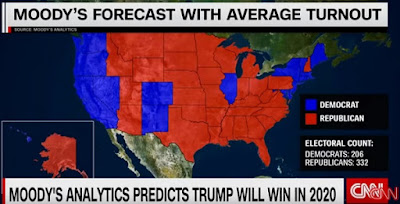 Having said that, can't you "feel the Bern" as in an electoral college landslide loss to Donald Trump? Indeed, we'll have our own version of 1972 all over again -- updated to present circumstances, so a 34-state loss instead of a 49-state loss. 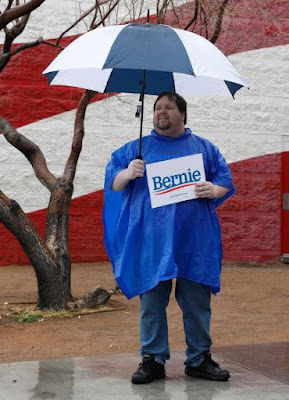 While South Carolina's Feb 29 primary and the March 3rd Super Tuesday's multi-state contest could alter the course of the race things, right now, Bernie Sanders is the big winner and front-runner -- which is precisely what Putin's going 2020 election rat-fucking operation seeks and to the delight of syphilitic gangster Trump and his GOP machine.


Trump's reaction to the news of ongoing Russian rat-fucking was, of course, totally predictable. 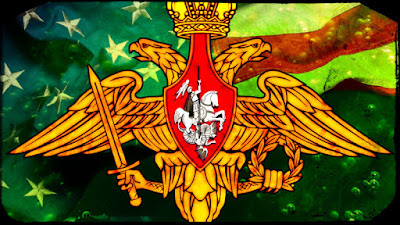 In carrying out a spectacularly flamboyant "horror movie" redux of its 2016 spy novel election interference, the goal of the Putin government is to create as much division, mistrust, distrust, anger, and all-around chaos in the United States. 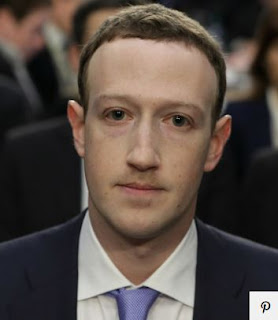 The Russian GRU and its multi-tentacled operatives are doing this using the US's own open media society to include the toxic, deeply malevolent, deeply destructive platforms of social media such as Mark Cocksuckerberg" Zuckerberg's Facebook and Twitter, both instruments of geocide and ecocide.


About Twitter, Jack Dorsey needs to be rot in hell a billion years for every tweet that Trump poops out of his McCheeseburger ass. 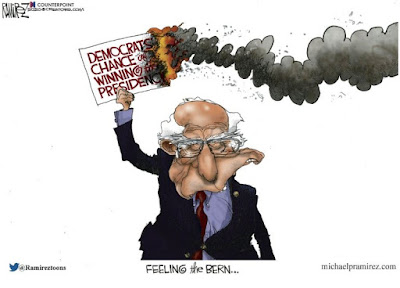 Anyway, the Russian rat-fucking is working nicely -- and Trump and the Moscow Mitch's GOP are DESPERATE for Bernie Sanders to be the nominee because they know how easy it'll be to obliterate him and his chances. Of course, if Bernie ISN'T the nominee, his supporters will blow up the Democratic Party's chances anway, so it is quite the no-win situation. 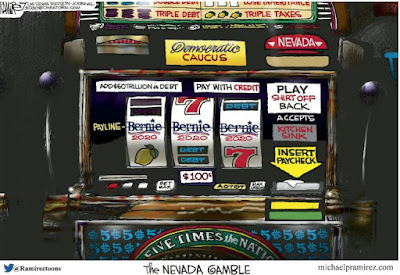 About the GOP, in its ethically diseased and flamboyantly illiberal mindset, it fully understands that only a ruthless counter-majoritarian rule leading up to destruction of American representative democratic systems is structures is the only way they can hold off a demographic timebomb until they are dead (at which point, it doesn't matter). 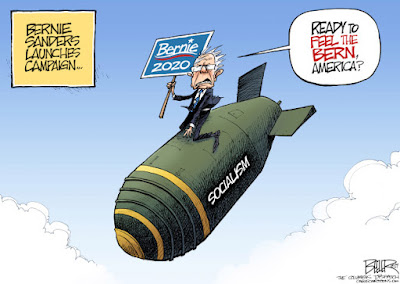 Now, look, I admit the possibility that the only effective counter-punch to something as malevolently destructive as Donald Trump might be another cult-like figure in the form of Bernie Sanders.
That is, perhaps only someone who is worshipped in a religio-Trotskyite fashion like Bernie Sanders can truly gin up the turnout among the huge numbers of people (especially young ones) who seldom or never vote and decisively defeat Donald J. Trump. 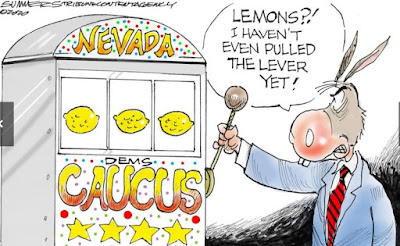 However, having come of age in the 1980's and '90's in the time of Reagan, Bush the Smarter, and the Great Clintonian Triangulation, I just don't see the United States electing a nearly 80-year old, distempered, self-described Socialist Jew as President who promises to obliterate large segments and structures of American society. OK, he calls himself a "Democratic Socialist" -- do you really think your average wind-breaking blob of an American is going to grasp THAT distinction, much less care about the subtlety of it??
YES, I could be wrong on this. Maybe all the old rules are out the window in this strange and dissociative time in which we are living. 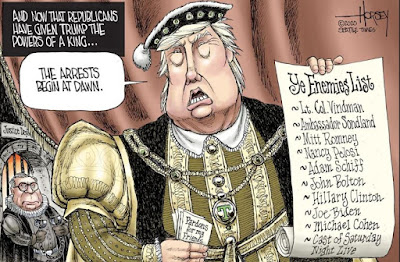 As for Trump, in the wake of the failed impeachment, his approval ratings are creeping up even as his mental illness and sociopathy deepen. To that end, he has embarked on a parody version of a Stalinist purge of his diseased regime. As for his approval rating, 43 percent of the country approves of this garbage suggests -- and in an ideal reality, that 43 percent of the country should be tossed IMMEDIATELY into the nearest active volcanoes. But we don't live in an ideal reality. 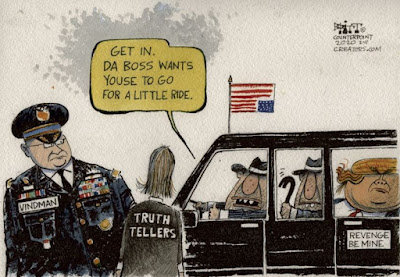 OK, I'm going to post at least one more entry tonight. I just wanted to get this one out of the way.
--Regulus
Posted by Regulus at 11:11 PM