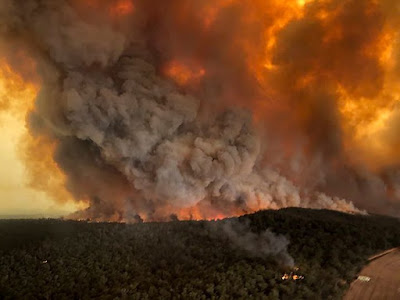 More raging wildfires in southeastern Australia, this one around Bairnsdale, Victoria, Dec 30, 2019
*******


Home now on this blustery -- though not bitterly -- cold night in an otherwise typically globally-warmed winter. It's about 35F at the midnight hour under mostly cloudy skies. There might actually be a bit of snow on Tuesday -- but then it is forecasted to be mid-January well above-normal-warm (around 65F) by the weekend.
So, I'm already behind on World Events in the new year, or at least two particular noteworthy happenings. 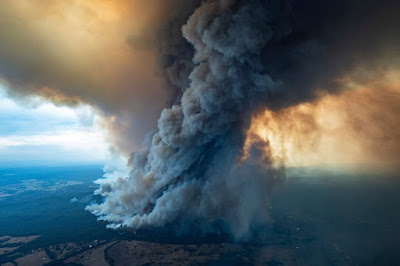 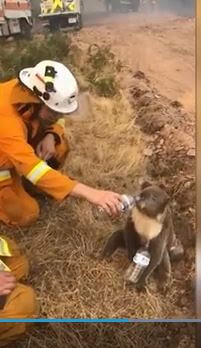 Just since September, 24 human deaths, not to mention an estimated 500 million birds, reptiles, and mammals killed in New South Wales alone to include a up to 30% of the NSW population … nearly 2,000 homes destroyed … and 12.35 million acres charred half way through the austral summer.

Plus a vulgar ass-wipe of a prime minster too busy shitting out lumps of coal and rubbing them on his moobs to notice his country is ablaze.


This whole situation has really made me rethink Australia as a refuge from the United States. At least I still have New Zealand … 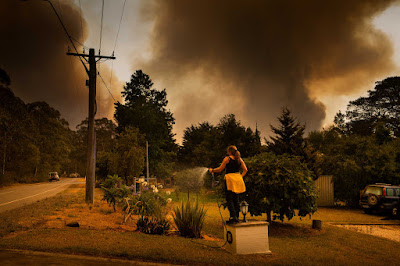 Some links:
Thousands flee Australia’s coastal towns as raging wildfires close in
Australia's prime minister visited families devastated by the wildfires. It did not go well. 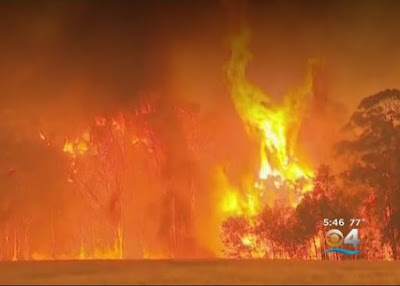 Amid bush fire crisis, this weekend may bring Australia its most dangerous weather for blazes.
Climate deniers are cooking themselves — and everyone else 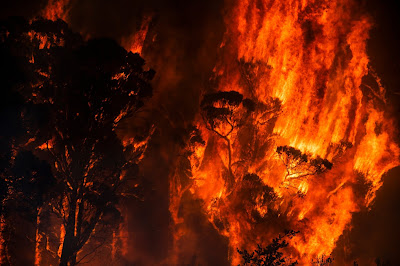 Australia Faces Extinction but its Leaders Still Don't Want to Know
The harsh truth is that Australia is ecologically much more sensitive and vulnerable than, say, North America and the consequences of its despoliation combined with climate change are wrecking havoc on it. 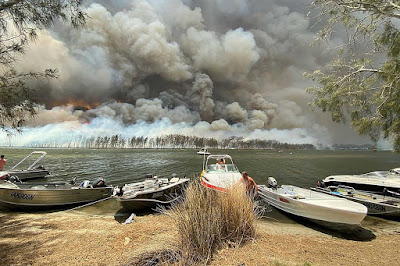 The fact that it has a criminally culpable leadership beholden to a death industry (coal, coal, coal) makes the whole thing characteristically early 21st Century egregious. 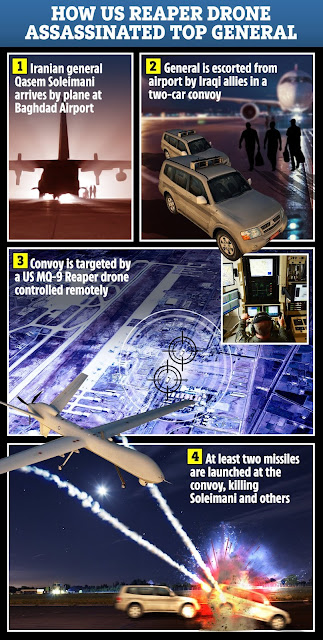 Meanwhile, the syphilitic, lawless gangster that occupies the Office of the U.S. President and leads a Cult-of-Personality over the rotted, zombie-like husk of a still structurally deeply - entrenched Republican Party* decided to go reckless batshit crazy headlong into a potential war with Iran by drone-killing Iranian Islamic Revolutionary Guard Corps (and Quds Force commander) Major General Qassem Suleimani (or Qassim Soleimani) in Iraq a few days ago. 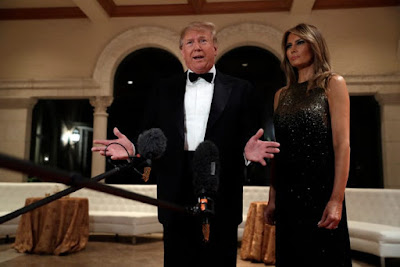 … which is to say, he's committing more impeachable lawlessness by the hour. About that, in actual war criminal fashion, is threatening to strike Iran's cultural treasures if the country retaliates -- which, as sure as day follows night -- it will do, a Vulgar Talking Yam's incoherent gibberish notwithstanding.
This malevolent, amoral asshole is getting us into a hot war with Iran … Great. What could possibly go wrong?? 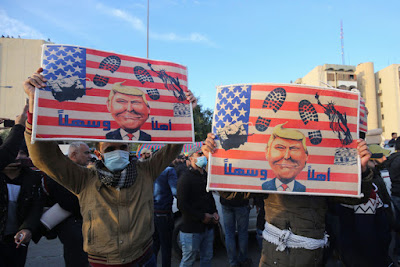 While the Trump Fox News and talking radio crazies such as Sean Hannity, Three Dolts on a Divan (nod to Charlie Pierce), and Rush the Vulgar, Closeted Pigboy -- to say nothing of Lindsey Gay Graham, the War-Mongering Queen of South Carolina -- others in the rightwing media/entertainment complex -- to include Tucker Carlson and even Geraldo Rivera -- are appalled.

This is one of those cases where the Right doesn't have an Official Party Line yet. 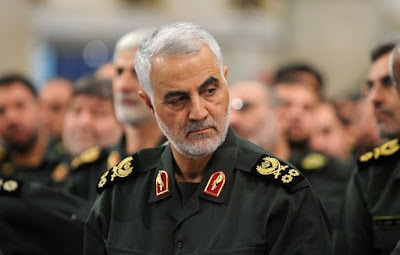 What's more, the Bush-era war mongering Usual Suspects are back in full-force having orgasms about the INSTANT need for TOTAL WAR with Iran.
From the above-linked Jack Holmes piece: 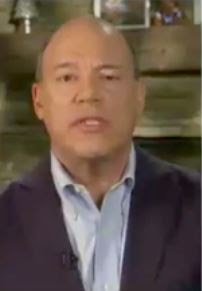 Imagine surveying the last two decades in the Middle East and confidently declaring that yet another unilateral American intervention will end well. This requires the kind of delusional confidence you can only call on when you staked out the same position on another U.S. intervention and faced absolutely no consequences when you were catastrophically wrong. 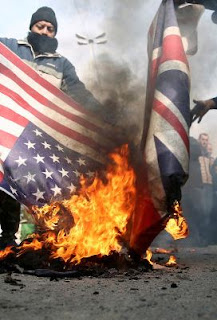 Luckily, there are no such consequences within the city limits of Washington, District of Columbia.

So it was little surprise to see a cadre of Iraq War cheerleaders invited onto cable news programs to declare that Thursday's assassination of Qasem Soleimani, Iran's second most powerful figure, will prove to be a big win all around.


Thankfully, the mainstream media complex is -- as of now -- not unquestioningly "rallying 'round the flag" and kissing Trump's ass, which was the original point of the operation -- especially with impeachment on his foul mind. 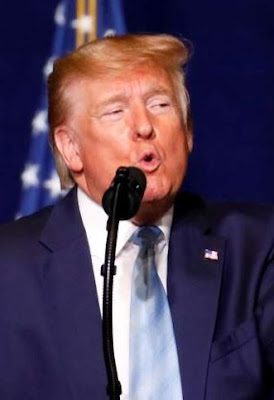 Indeed, Jonathan Chait had this piece last week about the massive level of projection involved in Trump's actions based upon things he said about Obama back in 2012, especially the Trumpian projectiles about starting a war to help win reelection.

Oh, and no surprise: Trump's excuse for such a brazenly incendiary act of hot war is mostly horseshit, of course.


Look at him: Speaking of shit, this poop-obsessed lunatic was haranguing to a bunch of "evangelicals" -- those wild, ignorant jackal animals always looking for World War III to start so that their deranged concept of Jesus can be "fulfilled." 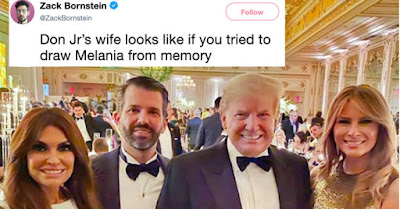 Already, the irreparably, violently screwed up country of Iraq -- where ISIS flourishes and which Iran has tremendous operational control thanks to Bush's Iraq War debacle -- is spiraling into more spasms of violence while the Iranians in their own screwed up country are ginned up into a rabid frenzy.
Bombs are already falling inside that stupid "Green Zone" that used to get the Washington Consensus all tingly all over.

Oh, and Iran just totally backed out of the nuclear accord -- which is what Trump wanted on the grounds of getting "a better deal," which is Trump horseshit-speak for the fact he hasn't a fucking clue what he's doing.

Jonathan Chait also had this piece about why Trump -- whose one saving grace as president had so far been a reluctance to avoid "stupid wars" -- might be doing this.

"[Trump's] real North Star is in fact an idea he has explicated many times, but -- perhaps because it is so horrifying -- even his critics seem hesitant to accept as a true motivation. Trump’s plan is to collapse the moral space between America and its enemies.


As an update, I'm home at this late hour watching TV, flipping back-and-forth between MeTV and Antenna TV.


Regarding all this old TV watching, I can't help it: I just love old TV shows, and they are very therapeutic to watch (provided I can mute the commercials …) at the late hour in my wee, lamp-lit apartment while updating this blog. 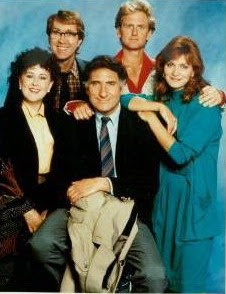 Dear John is not on tonight. That is yet another show. I'm especially fond of the opening theme song. (Yes, I'm referring to the U.S. show Dear John, not the British show of same name.)

Then there is the show It's A Living, but I never got into that one.


As for today (Sunday), I went into the office and made progress on the last of the four reports that are due tomorrow -- although I still have a fifth one for this current round of reviews that I intend to finish by the week. 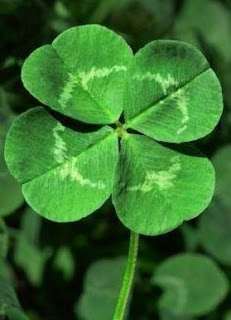 OK, that's all I'm going to write for this entry.

My next planned posting will be in a day or two.

That entry will either be about my disastrous visit with my mother this weekend (we're just bad together) or, if it comes to pass this week, the property management trying to evict me for the Dec 20th incident. I already have a lawyer.