Finally ... After 15 Years in the Void of a Timeless, Meaningless Present, While Staring Into the Sun-Bedazzled but Vacant Reflection of a Dead Past ... A Meaningful Move for My D.C. Near Future 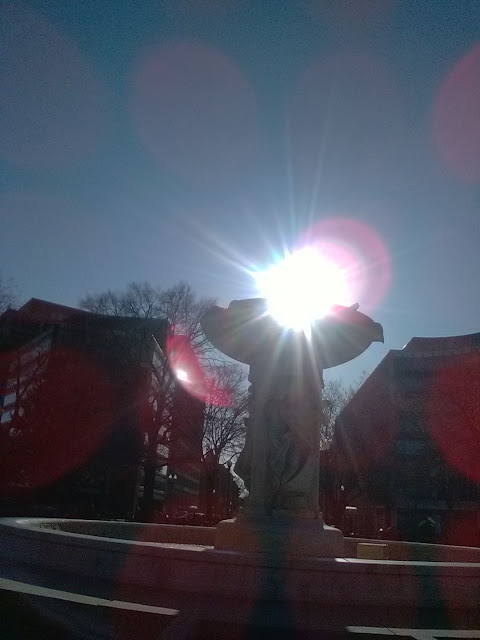 
The pictures in this entry are primarily from my walkabout down New Hampshire Ave into Foggy Bottom and into Georgetown on Monday, although the first two (below) were taken Sunday evening. Except for the lead one, they're posted chronologically. 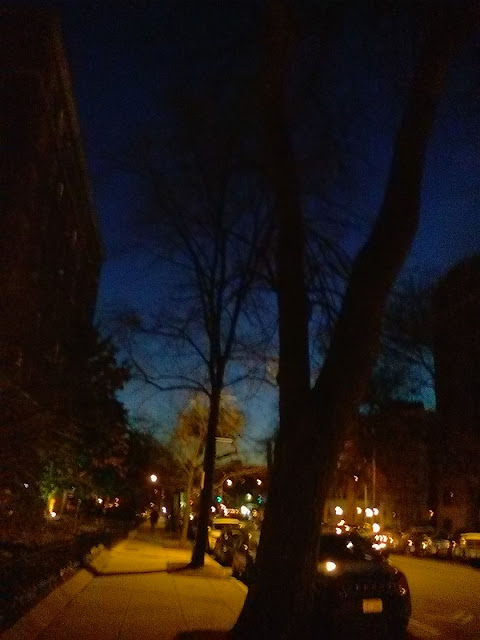 
Monday was a cold but brilliantly sunny winter's day (temp around 34F). I had the day off for the Martin Luther King federal holiday. It was also Jan 20th -- which, HOPEFULLY, marked the one-year mark until Trump leaves office (but I won't be shocked if that doesn't happen). 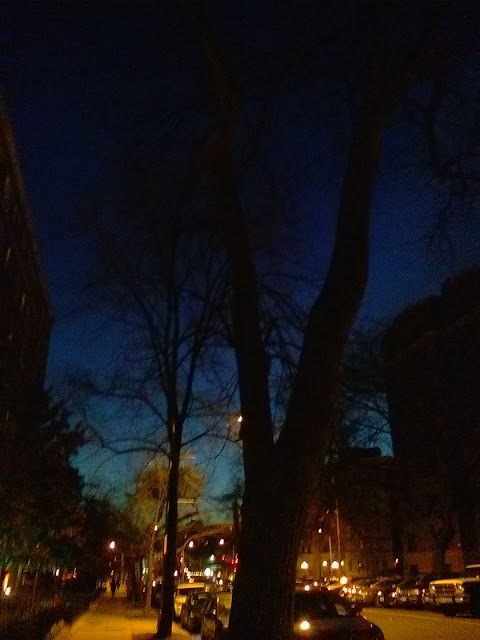 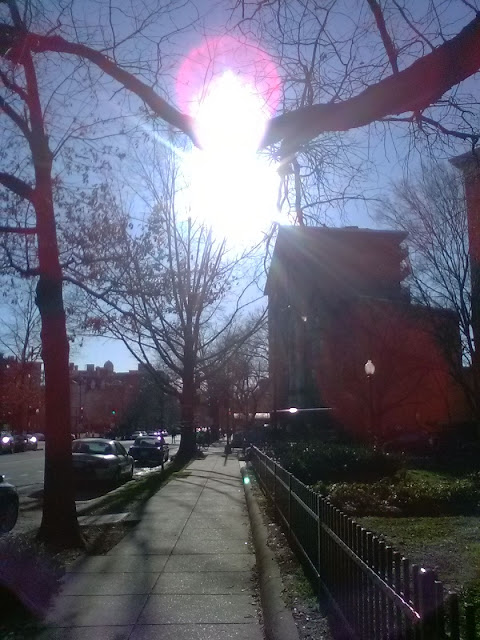 
It goes without saying that 15 years in one place is way too fucking long, especially in an urban, single, troubled, middle-aged life and world such as mine. Not surprisingly, I've grown to hate Shaw and especially the disgusting U Street Corridor.
To be clear, I'm not moving that far distance-wise -- easily walkable -- but it is a much better neighborhood closer to Dupont Circle and near Georgetown. 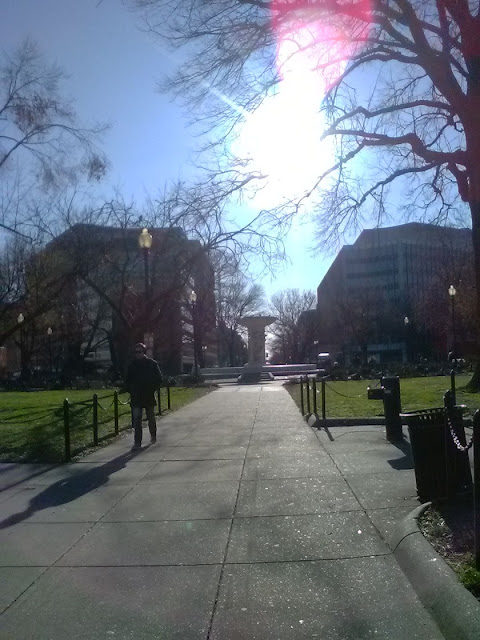 
I've already changed most of my mailing and billing addresses, although the USPS one screwed up because it sees, ironically enough, a discrepancy in a billing address for that $1.05 charge to forward mail and get on another e-mailing list. 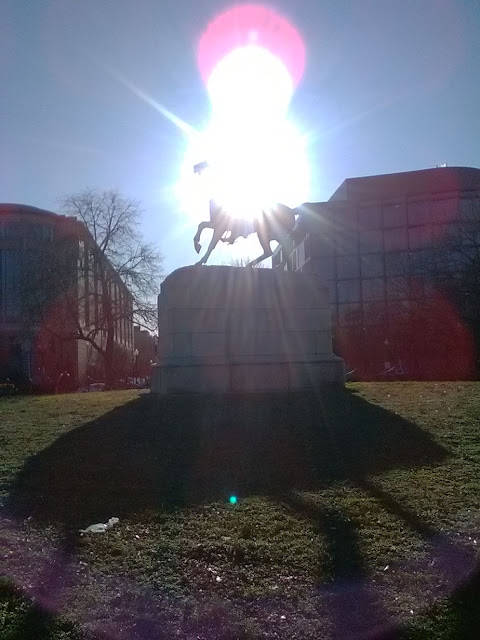 
Tomorrow, Gary is supposed to help me move the plastic bins (I've eight in all, six of which I got from Fred and Aydin) tp include all clothes, folders of various papers, important and otherwise, kitchen stuff (I don't have much), and sundry bathroom notions and potions. 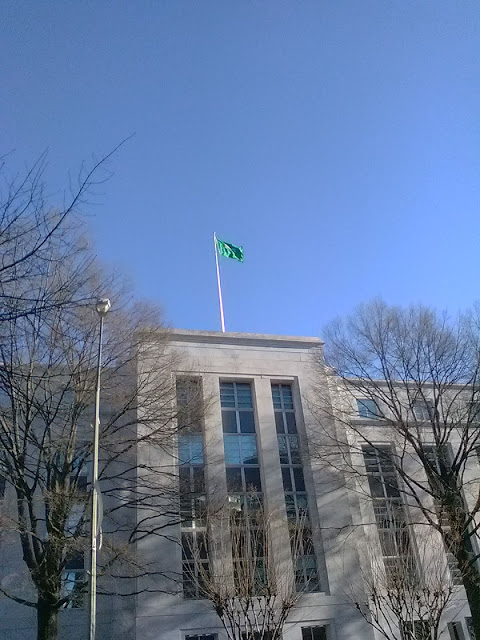 
On Saturday, I move my bulk items, specifically, pathetic two tables and four chairs, two lamps, small flat-screen television, and box fan that count as my sad furnishings. (The fan is the very important.) (As for the a/c, it belongs to this building -- and I have one in the new place.) 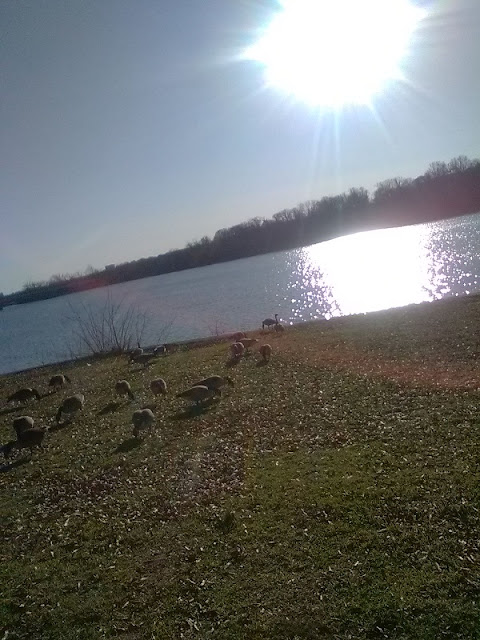 
I'll split the bedding stuff -- which, remember, is all on the floor. About that, I went to the Columbia Heights Target earlier tonight and bought a new memory foam bedding cushion and quilt, both of which I'll open tomorrow. It was a pain in the ass toting those items plus a new frying pan and lamp and a couple other items down 16th Street. 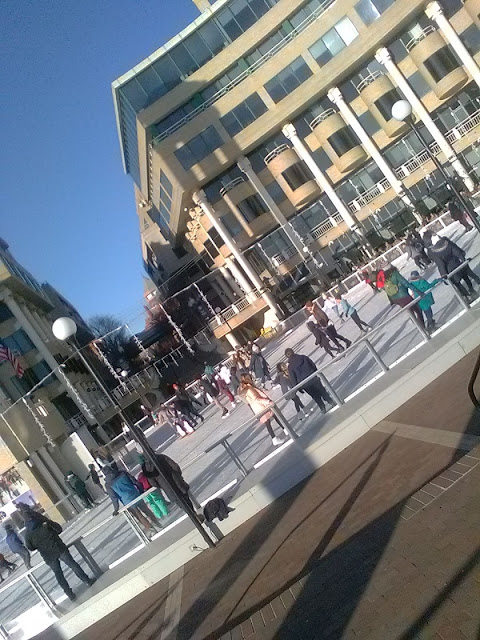 
I've actually thrown out quite a bit of stuff including old photos, way too many cards, some newspaper clippings (especially all those turn-of-the-millennium ones since that was hardly a good period for me and I remember nothing of it fondly), and the like. This included, by the by, that stupid-ass 2006 "hot gay bartenders" calendar -- I quite enjoyed ripping up that. 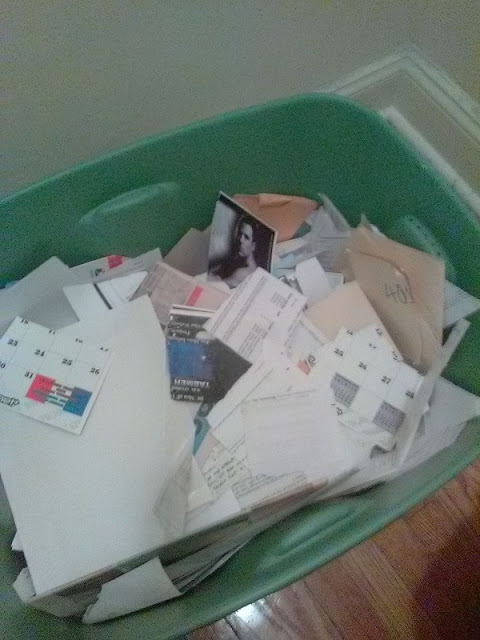 
Indeed, I move out of this building with significantly less stuff than when I moved in -- precisely because I tossed out over 99 percent of what was once a self-parodying enormous written "journal" that ran for 30+ folders and contained a few tens of thousands of pages. (In my dreams these days, I'm forever trying to organize those papers -- except the numbering is all screwed up or duplicates.) 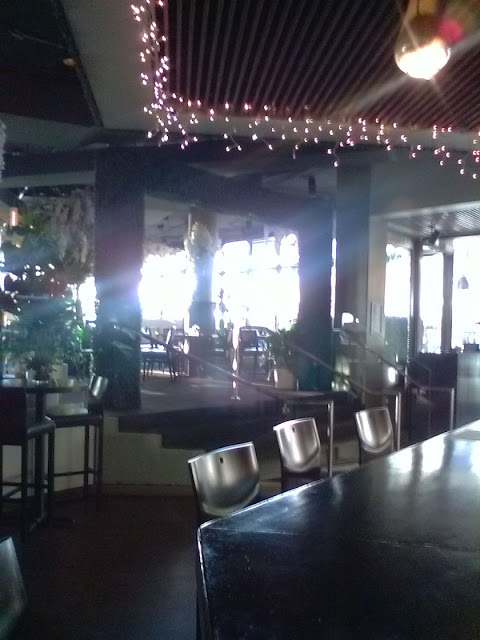 
Today, only one folder remains containing maybe 150 pages -- covering the period 1992 - 1996 -- along with other personal papers.
This blog serves, I suppose, the function of that journal. I've kept everything involving my paternal grandmother. 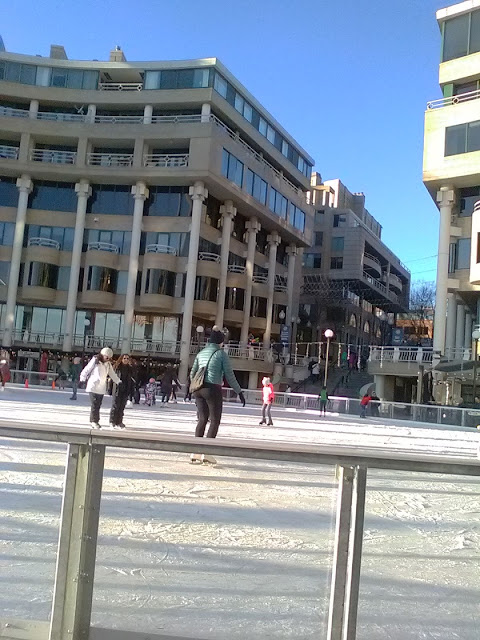 
I should note that in the past six to eight years, my mother has inundated me with her own tossing out of the past -- mailing it to me -- to include high school and grammar school pictures,  a few wedding pictures (unframed), birth and death certificates, really old pictures from her childhood and that of my uncle (her younger brother), and sundry material grandparents matters (I never knew my maternal grandfather) in that dark vortex of Old World Polish misery. 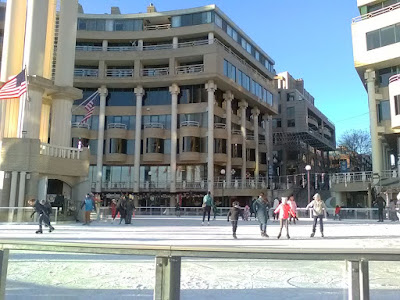 
I even have copies of my maternal grandfather's stint in an Army mental hospital on Long Island right after World War II (he was born in 1909 but served in WWII including in European and North Africa campaigns as a mess cook). 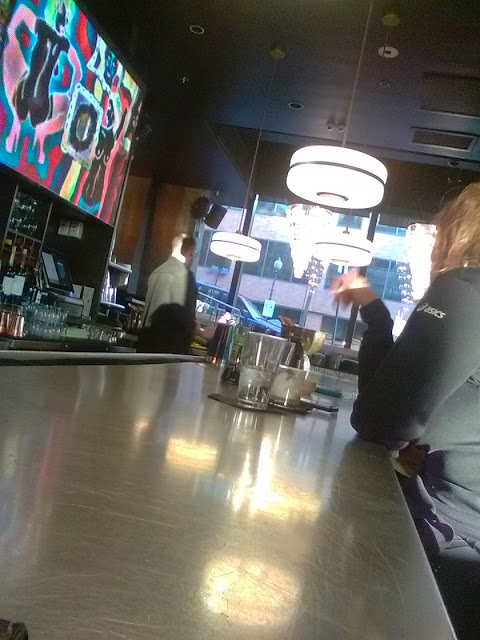 Susheria, Georgetown, Washington, D.C., 4:42 p.m. January 20, 2020
This restaurant is a sort of Japanese - Peruvian fusion place. I tried to explain the whole Thor Heyerdahl Kon-Tiki expedition thing to the young manager, but I don't know if he understood -- in part because I had trouble explaining it on the fly.
*******


Speaking of things paternal, this Thursday (Jan 23rd) was my dad's 79th birthday. I'm going to visit him down there in Florida in April or May. For his 80th birthday, I think we're going to try to take a vacation somewhere tropical outside the United States. I'm considering Colombia's Archipelago of San Andrés, Providencia, and Santa Catalina -- at least one of those islands in the western Caribbean. 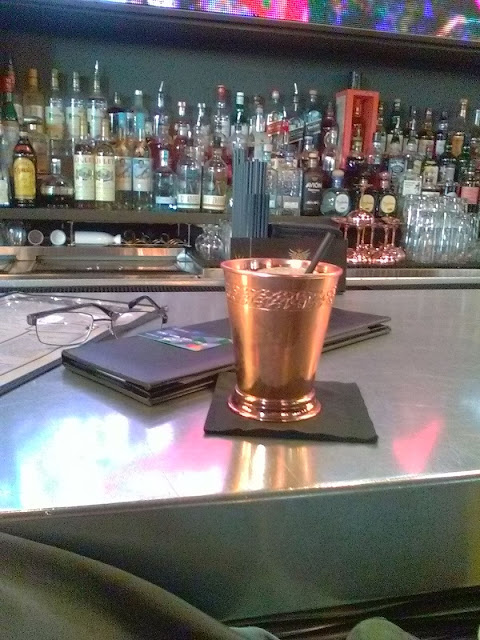 
Back to the present, right now, I'm doing six loads of laundry to include all the bedding I will bring over. And I'm in my soon-to-be-vacated (quitted rather than impossibly "cured") place watching late night old TV -- in particular, the MeTV line up (The Carol Burnett Show, Perry Mason, and The Twilight Zone). Antenna TV is on a Barney Miller-marathon, so no wee-hours Becker, Dear John, or Wings. 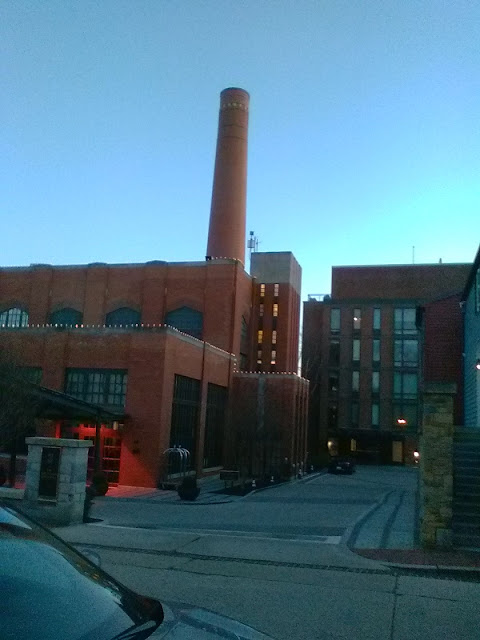 
For tomorrow (Friday), my plan is to pick up the keys early afternoon. I may try to go to the gym in between that and when I meet Gary, but I'm not sure. My gym schedule the past month has been quite poor -- but I intend to maintain going there (YMCA Anthony Bowen) at least twice a week despite the fact it will no longer be in my neighborhood. I'll just go there directly after work on weekday nights or a weekend day. 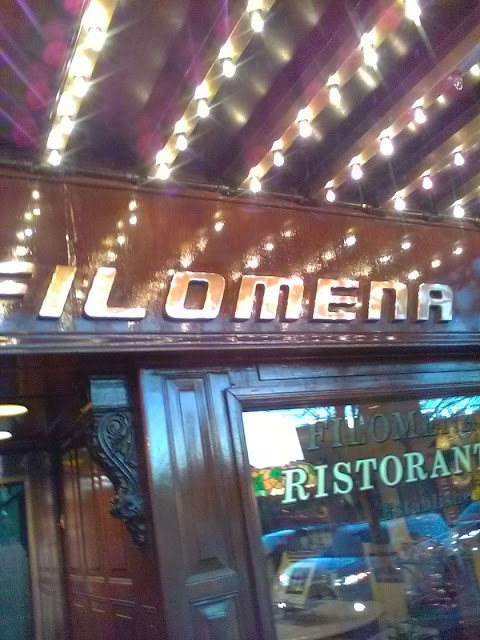 
OK, that's all for now. My internet should be set up on Sunday in my new place, but I intend to post my JbSN edition (which I had intended to post last Saturday night) earlier on Saturday before I remove the computer from this apartment. 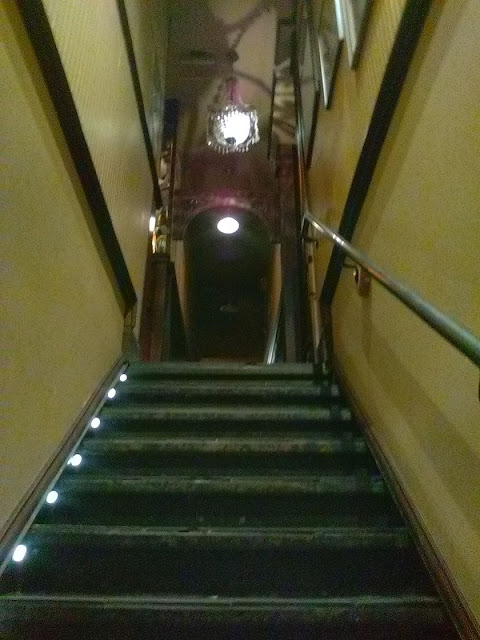 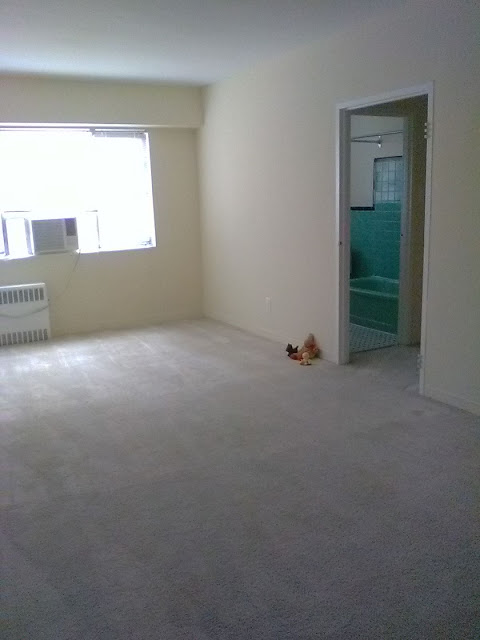 New apartment near Dupont Circle, Washington, D.C., 2:12 p.m. January 24, 2020
Over there on the floor is my very clown doll and terrier dog doll, as well as my Sunshine Buddies from my late friend Bryan. The two dolls actually belonged to my namesake uncle Richard who died back in 1963, so they are at least 60 years old.
*******


It's 4:30 p.m. on Friday afternoon and I'm very happy to write that I was able to get the keys to my new apartment with no issues.
However, there are still a few unresolved matters, legal and quasi-legal, with my existing landlord, so I still need my attorney for the time being. My plan is to be entirely out of here by tomorrow evening.
I've also spent a lot of time changing my addresses everyone -- to at least a dozen different organizations / entities from credit card companies to bank to student loans to DC Board of Elections, among others.
What's more, as I mentioned above, the U.S. Post Office one FAILED to work because its system is either having a problem with my previous versus new address as listed on both cards I attempted to use OR because it doesn't like the order of apartment number versus street location in the new address.
Considering the whole point of this $1.05 charge is to get a change of address going for mail forwarding purposes, this seems rather odd.
OK, I need to get this entry posted and commence with packing the items I want to move today. 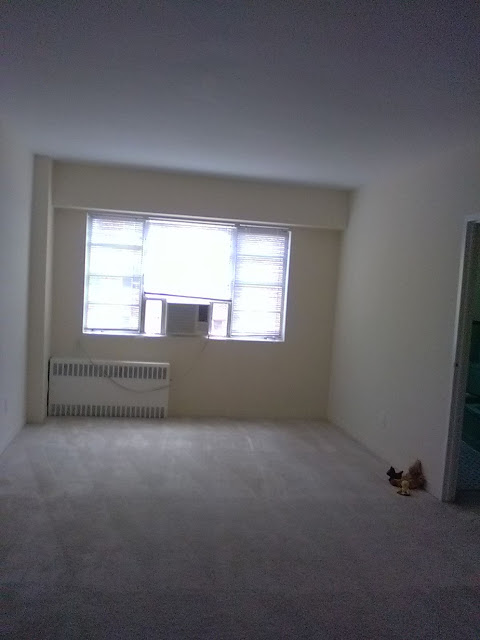