Once Again, Australia Is Roasting, Burning, and Choking While Coal-Suckling, Trump-Duckling PM Scott Morrison Scurries Away on Holiday 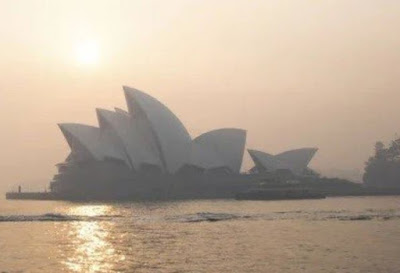 The Sydney Opera House shrouded in dense wildfire smoke with a low-angled Sun veiled by the haze,
December 2019
No, this picture isn't from that scene of post-apocalyptic Sydney in Mad Max Beyond Thunderdome.
******* 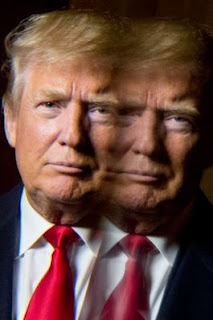 Sometimes in the middle of this never-ending dystopian Trump shit-show, enabled by the degenerate, amoral assholes (READ: Mitch McConnell and Susan "Dead End" Collins) and Red State racist, fundie, Know Nothing crazies that comprise his enabling GOP authoritarian-cult here in the United States, it's easy to lose sight of just how fucked up the rest of the world is at the end of 2019 …


… precisely because the comical gangster figure of Donald J. Trump is as much a symptom of the reaction against the catastrophic failures of the Washington Consensus 1990s New World Order (calling Robert Rubin, Alan Greenspan, and you, too, Sebastian Mallaby) as he is the leader of the current spasm of global neo-fascism roiling the civilization of this globally-heated, massively overcrowded, eco-dying planet. 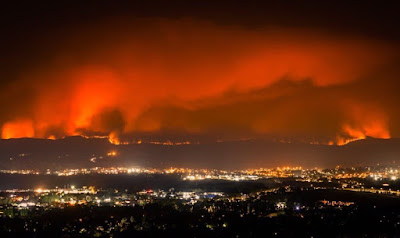 I mention this because the political situation in Australia is exacerbating the climate crisis in spectacular fashion. On the latter topic, Australia has an extreme sensitivity to anthropogenic climate change -- and the sundry, increasing modes of natural variability (most notably, the Indian Ocean Dipole (IOD) and the El Nino - Southern Oscillation (ENSO)) -- has caused a massive increase in heat and drought and hence the duration and severity of its wildfire season. 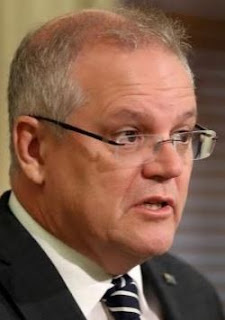 As for the former, Australia is being run by a Trumpian-like rightwing dickhead of a Prime Minister, Scott Morrison, who, like Trump, won an unexpected victory and whose Trump-like coal fetishization -- itself the obscene follow-on to the previous prime minister's effort to regulate CO2 emissions -- is just as sick as the deranged political situation here in the U.S.


Both Trump and Morrison fetishize coal because they (correctly) understand it will help them politically, but in Trump's case, he's also stupefyingly ignorant because he hasn't a fucking clue about coal or anthropogenic climate change or, well, anything. He's also mentally ill, as yesterday's bizarre six-page written rant to Nancy Pelosi ahead of today's House impeachment vote attests. Morrison is just a cheap opportunist. 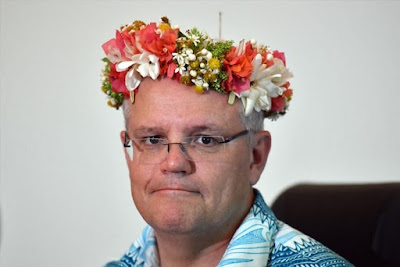 As for Australia's failures on the climate change mitigation side and what's going on, this broader-themed Intelligencer piece by David Wallace-Wells on the embarrassing complete collapse of the COP25 UN climate conference in Madrid has a nice (depressing) summary of the disasters ecological and political in "the Land Down Under" on this matter. (As for the COP climate conference series, it's well past time to put that out to pasture.) 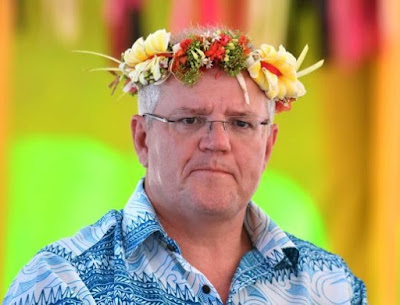 There is also this Bloomberg piece from about six weeks ago (Nov 12, 2019) that speaks to the issue: Devastating Fires Fail to Shake Australia Climate Change Inertia. 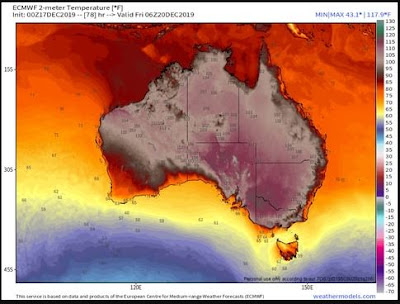 
Here is an excerpt from the Bloomberg piece:
Morrison, who in 2017 famously wielded a lump of coal in parliament in support of the industry, is backing a new project by India’s Adani Power Ltd. that would further increase exports of the fossil fuel. His government is even considering underwriting coal-fired projects as it promotes an energy policy designed to prioritize lowering voters' electricity costs rather than reducing emissions. 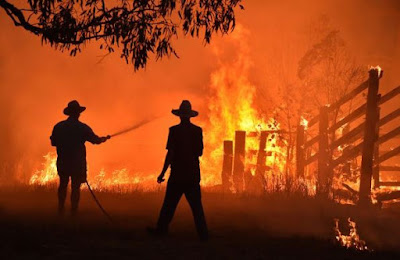 Here is a Capital Weather Gang entry on the current situation in Australia with widespread 40C plus (104F plus) temperatures expected. Indeed, as the CWG piece notes, Australia's Bureau of Meteorology (BOM) is anticipating the following: 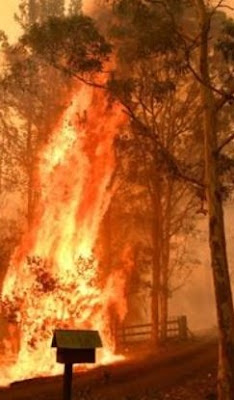 The existing national record for the highest nationally averaged temperature is 104.5 degrees [°F] (40.3 Celsius), which was reached in January 2013. "Current indications are that we’ll be at least a degree above that on Wednesday and Thursday," [senior BOM meteorologist Blair] Trewin said, calling this "a really extreme event on a nationwide perspec-tive."


The BOM is also forecasting that many locations will break monthly records for the hottest temperatures in December. In fact, some places in New South Wales could see their hottest temperature on record for any time of the year, particularly on Saturday, Trewin said. 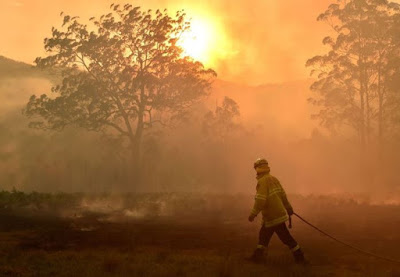 Already, Perth, located in Western Australia, has broken its all-time December record for the number of consecutive days (three) reaching or exceeding 104 degrees (40 Celsius).
In Adelaide, the forecast calls for four straight days (through Friday) with high temperatures of 104 degrees or higher, according to BOM meteorologist Sarah Scully. 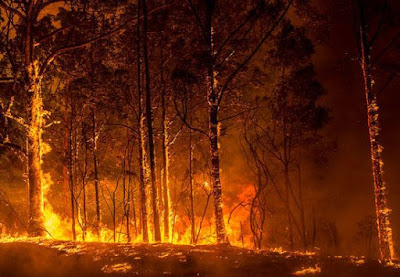 Cities in southeastern Australia could see a sea breeze that prevents temperatures from climbing above 100 degrees during this event right along the coast, but areas just to the northwest of the ocean will sizzle.
Note: This CWG has already been updated to reflect the fact that Dec 17, 2019 was the hottest day on average on record across Australia (see bottom of this entry). 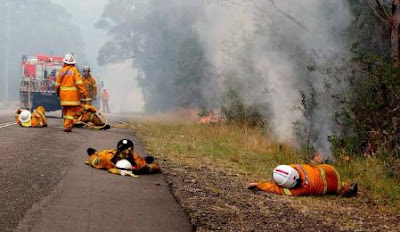 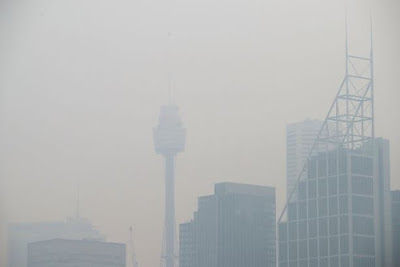 
Nearly 100 wildfires are burning across New South Wales, Australia, scorching more than 5.3 million acres of land and shrouding Sydney beneath a potentially deadly cloak of toxic smog. The bush fires are largely enhanced by climate-change-driven drought and increasing temperatures.
Oh, and then there's this angle: As fires rage across Australia, fears grow for rare species. 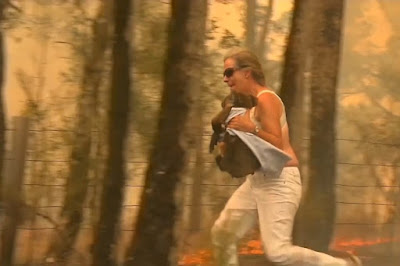 Despite the bravery of this woman, this little fellow didn't survive and had to be euthanized due to his severe burns.
As many as 1,000 koalas have been killed in this season's conflagrations with much habitat destroyed.
******* 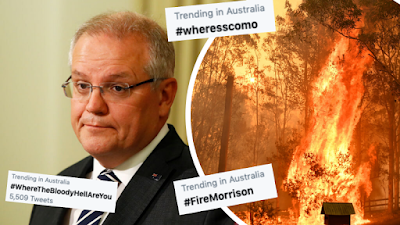 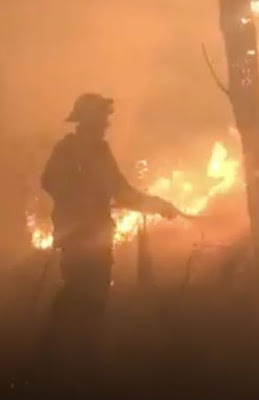 As Australia roasts, burns, and chokes, Morrison has done a very Trumpian thing and taken a big vacation: Australia Is On Fire, And Nobody Knows Where Our Prime Minister Is.

Not surprisingly, he's a filthy hypocrite on the scale of any American GOP pol: Scott Morrison's words come back to haunt him as backlash against holiday continues.

What a sick ducker.


Of course, Australia has a political system like the United States that gives too much fucking power to predominately white rural and rightwing places, and so he's probably in no danger of being drummed out of office. 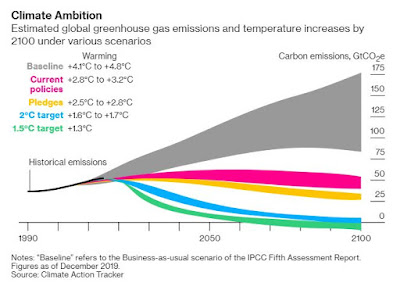 In both Australia and the United States -- and, indeed, the rest of the world -- we are getting farther and farther away from any meaningful action to limit greenhouse gas emissions. The only hopeful sign is the vast expansion of renewables and improvements in energy efficiency -- but carbon usage itself is still relentlessly rising.
Before signing off, I should note that it appears Australia has, in fact, set its highest average daily temperature ever: 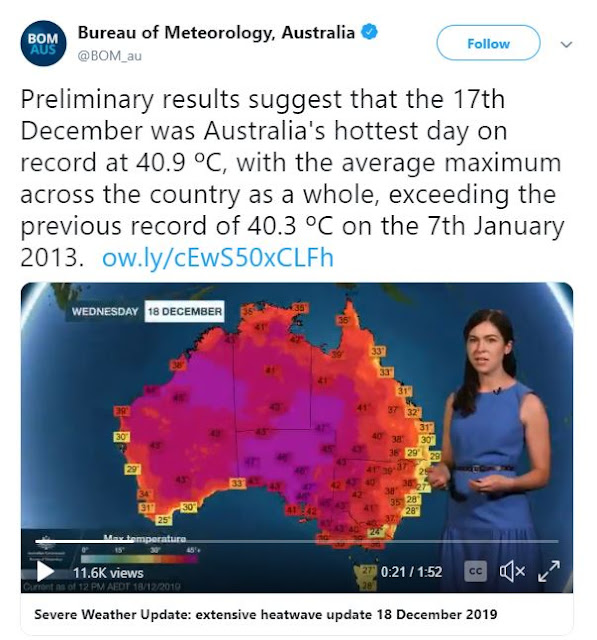 
So, it turns out that Australia set ANOTHER highest average daily temperature ever just one day after the previous record, and by full 1 degree Celsius or 2.2 degrees Fahrenheit. Here is the tweet from the Bureau of Meteorology (BOM): 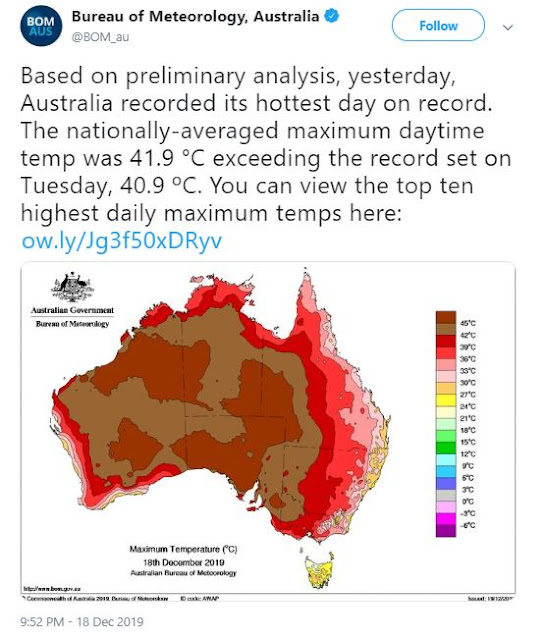 Again, just so I have it as text in this blog entry: 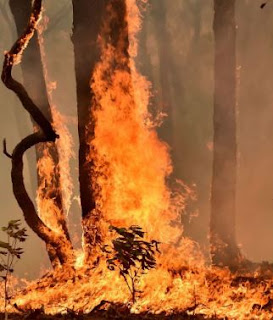 "Based on prelimi-nary analysis, yesterday [Dec 18, 2019], Australia recorded its hottest day on record. The nationally-averaged maximum daytime temp was 41.9°C (107.4°F) exceeding the record set on Tuesday, 40.9°C." Source here. And here a CWG entry on the matter:


Back home, today was a curious sort of day (this now-concluded Tuesday): 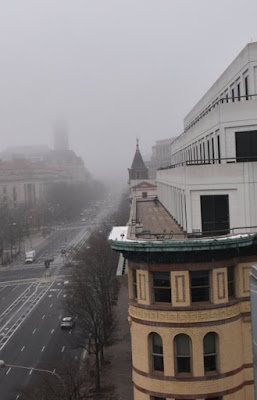 Foggy -- occasionally densely so -- for hours following rain last night and this morning and temps only around 40F. The high eventually crept up to a KDCA while KBWI reached 41F and KIAD 40F.

The chilly fog cleared out and some additional rain showers moved in by early nightfall before ending by 8 p.m. Two-day rainfall totals were 0.54" at KDCA, 0.45" at KBWI, and 0.53" at KIAD.


Above: View along Pennsylvania Ave NW in downtown Washington, D.C. Image by twitter user Jonathan Make on Dec 17, 2019 and featured in this CWG entry.
Looking ahead, the pattern is going to shift to a dry, chilly one -- followed by a gradual warm up. Christmas will be mild with high temps around 55F, part of a broad pattern across the U.S. of tranquil, mild weather. 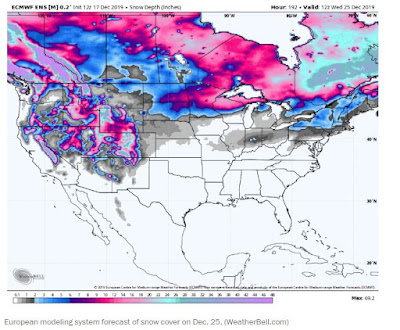 
No, no white Christmas -- not even on the 50th anniversary of the last Mid-Atlantic Christmas Day snowstorm when I was but 1 month old (in New Jersey). Just another brown one.
OK, that's all for now. I'm signing off and going to bed. My next planned entry will be on Thursday.
--Regulus
Posted by Regulus at 2:37 AM