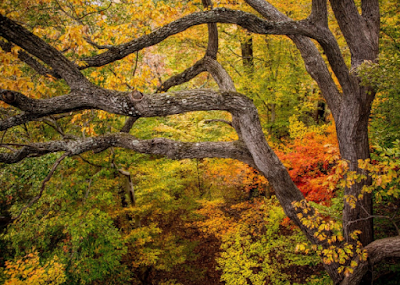 
So, I want definitely to post a Trump impeachment update, but for this entry, I would like instead to feature a weather-related posting.


No, there's nothing particularly of note in our region tonight. The most noteworthy element is the strong cold-core upper level low that came ashore over Southern California and is now slowly rotating across Arizona.


This upper level low resulted in a strong pressure gradient between southern Oregon and central California -- and a gusty northerly wind that resulted in widespread red flag warnings for enhanced wildfire danger -- not to mention, PG&E preemptively shutting off power again to areas north of the San Francisco Bay area, although no where near the numbers impacted last month when nearly 3 million people were temporarily blacked out even while massive wildfires raged. 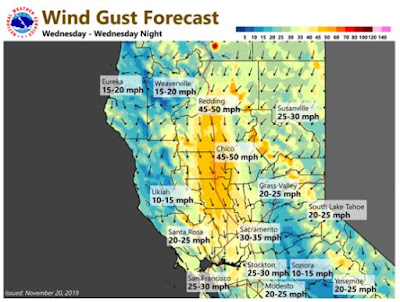 
The weather pattern resulted in an interesting configuration of NWS weather hazard products over the past two days in California that invert what one might expect, namely, red flag warnings in northern California, winter storm warnings in the central and southern Sierra Nevada Mountains and even the San Gabriel Mountains above Los Angeles, and flash flood watches for areas of Southern California all the way to the Pacific coastline. In some cases, the deep pink color of the red flag warnings were cheek-by-jowl to the hot pink of the winter storm warnings. 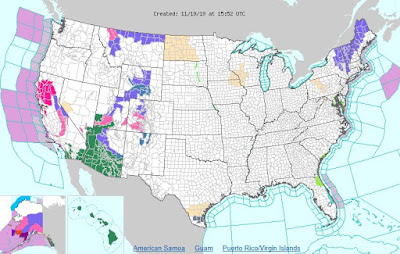 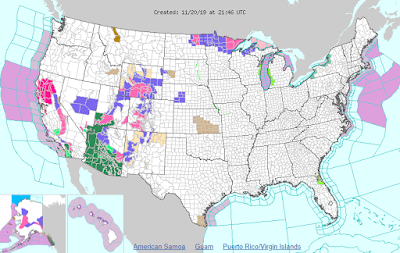 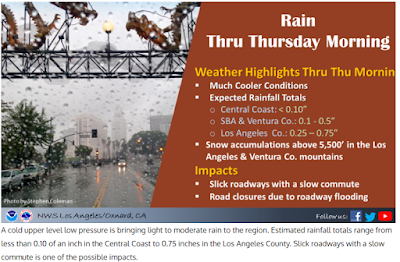 
The system has produced showers and thunderstorms across the coastal and valley locations and heavy snowfall in the mountains above about 5,500 feet in Los Angeles and Ventura Counties. Two-day precipitation amounts ranging from a trace in Santa Barbara to nearly 2 inches in higher parts of San Diego County east of the city. 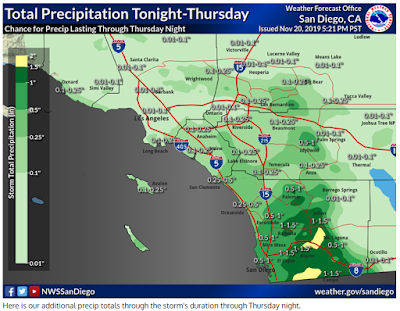 
The highest amount I could find with an ASOS was Campo at 1.22 inches through 4 p.m. PST, although even downtown Los Angeles - USC (KCQT) picked up 0.63 inches (all on Nov 20th). Two-day rainfall totals for parts of Southern California were as follows (and I'm only including the ICAO codes rather than place names):

No, we're not into Los Angeles: November 2019 Blade Runner territory … 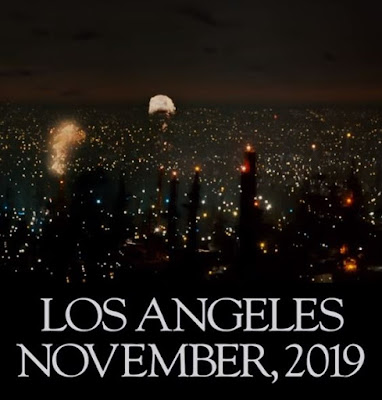 Interestingly, the latest 0Z GFS has a 987-mb low coming ashore at San Francisco at hour 150 (6Z 27 Nov 2019).
As for back here, there was an interesting bit of weather on Tuesday night as an upper level low with occluded mesoscale low surface reflection rotating across the Mid-Atlantic -- itself the back side of an earlier weekend nor'easter that really impacted eastern Massachusetts and coastal Maine before heading to the Canadian Maritime provinces.
Here was the weather map for Tuesday evening … 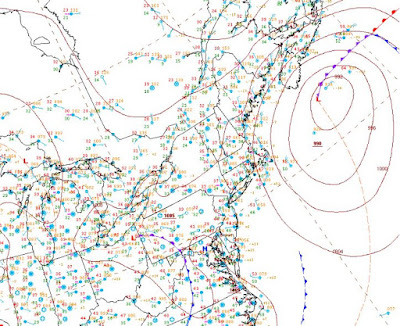 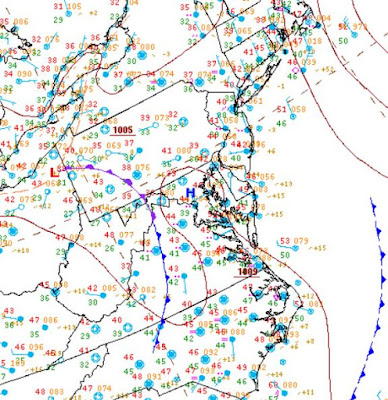 Same as above but focused in on the Mid-Atlantic region
This map shows a "meso-high pressure" area over the immediate D.C. area and an occluded front literally 70 miles to the west extending back to a minor surface low centered about Warren, Ohio.
*******


In the Metro D.C. and Baltimore areas, KDCA actually picked up the most -- and, on a personal note, I got quite wet walking the short way home from the gym, although not nearly as drenched as three weeks ago on Halloween night -- with 0.31" while the other main weather recording spots picked up the following:
KBWI: 0.13"
KIAD: 0.13"
KDMH: 0.09"


I'll post an update on the monthly, seasonal, and yearly precipitation totals and departures at the end of the month.


Looking ahead, the pattern into the weekend is uncertain as a result of a split jet flow with the southern stream system (discussed above) ejecting out of the Desert Southwest into the Southern Great Plains and thence the Southeastern U.S. while a northern stream upper level trough / closed low swinging through the Great Lakes region into Quebec. There is a chance of rain on Saturday here in the D.C. area but the split pattern makes it uncertain.


Of note and in keeping with our globally warming and warmed, human-fouled world, 2019 is shaping up to be among the warmest months globally on record. The CWG had this entry on the matter (link embedded): We're living through Earth's second-hottest year, NOAA finds
What don't humans totally fuck up and turn to shit?
Here are the key figures from the entry … 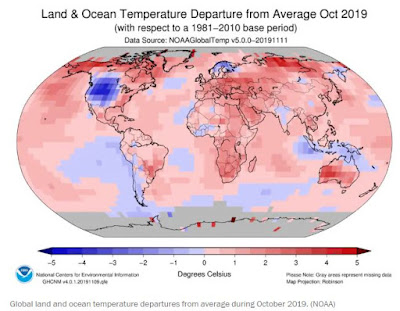 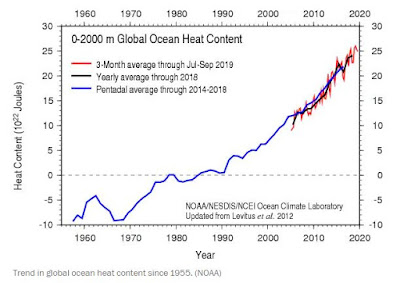 The 1955 - Sept 2019 trend in global ocean heat content, surface to 2,000-meters, measured in units of 10^22 Joules versus baseline for the averaging periods show
Just FYI: 10^22 Joules is 10 septillion Joules or 10 Zetta-Joules, or if you prefer, 10 billion Tera-Joules. Yes, that's a lot.
Oh, yes, ignore the comment section. It's as if the people who call in the wee hours into Coast to Coast AM decided to show up and post whatever nonsense occupies their brains.
*******


On Unicorns and Meteor Shower Outbursts… 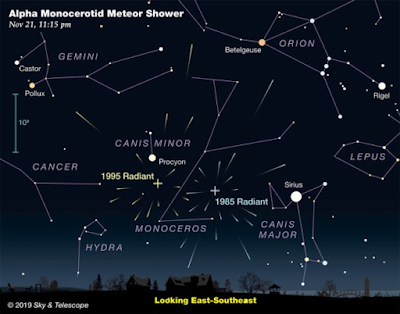 Lastly, for this entry, I'd like to note this astronomy news item via this CWG entry (link embedded): One hundred meteors in 15 minutes? 'Short-lived outburst' of shooting stars forecast for Thursday night.
This is in reference to the Alpha Monocerotid meteor shower expected late Thursday night -- which could, if all goes well, produce a veritable meteor "storm" around 11:50 p.m. EST and lasting up to 45 minutes. 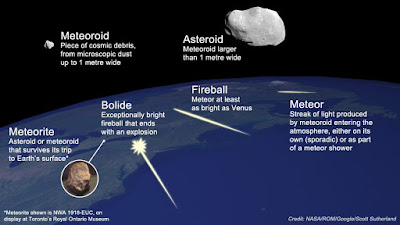 Yes, these things are invariably overpredicted for annual meteor showers -- of which Alpha Monocerotids is one … 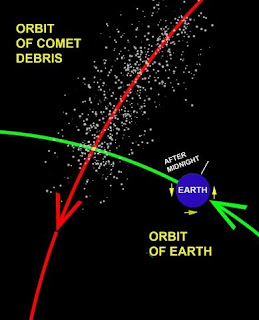 … but this year, two astronomers who have studied this calculate, as ever-so-often happens, there could be a much higher zenithal hourly rate than usual, possibly on par with previous outbursts ("storms"), the last of which was in 1995, as Planet Earth transits through the tail produced by an unidentified long-period comet. You can also read about it here.


The name Monocerotids comes from fact that meteor shower's radiant point appears to come from the constellation Monoceros ("the Unicorn"). The best viewing will in South America but there is reason for optimism (given suitable viewing conditions) in the eastern United States. 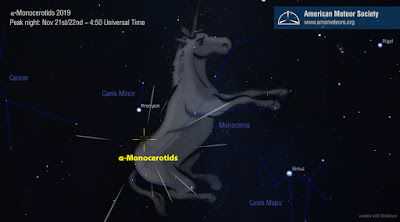 We'll see … Maybe.
OK, that's all for now. I'll try to post another entry by Saturday.
--Regulus
Posted by Regulus at 3:40 AM