Washington In the World Series: The Rainy Night Remote Conclusion -OR- Houston, Do We Have A Problem? UPDATE: The World Series Win Has Landed! 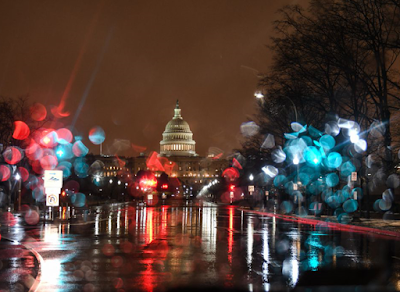 A rainy night U.S. Capitol view; image by Young Choi; Source here
Yes, this image was taken in the spring (April 2017), but it still makes the point.


I'm here at the office but getting ready to leave for the day. It's a non-gym night -- as I went both Monday and Tuesday nights. In addition, tonight is Game 7 -- the final one -- of the World Series and whoever wins tonight set to win the title.

The Nationals won the first two games in Houston -- and then promptly lost the next three here in D.C. to the Astros -- only to win last night in Houston, hence the three-three series tie. (Both teams have so far lost all the games they played in their home cities.)


Anyway, long story short, I'll watch part of the game at, I think, that old-looking new Union Trust Bar -- so named because it is in the old Union Trust Building, where Joe's is also located -- and then, right near where I live, at Exiles. Gary is supposed to join me, I think. 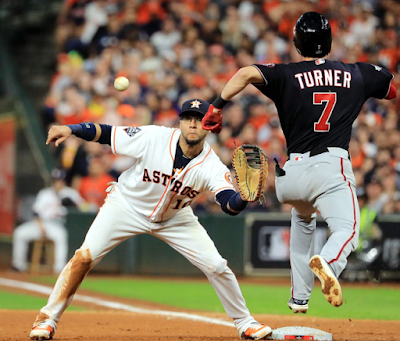 Obviously, I'm hardly a professional sports fan -- baseball is probably the closest game that I even tune into -- and on those times that I do get interested, well, much like watching election returns roll in, my side always loses when I do by virtue of jinxation (is that a word?). But this is the first time since 1933 that the city is in a major league baseball world series, the first time this close since 1925, and were they to win, the first time since 1924, or so says The Keeper of All Knowledge. 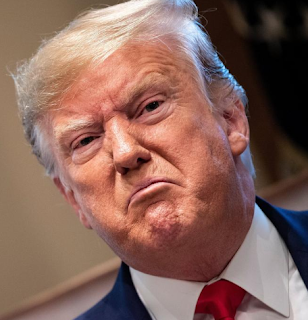 Regardless, it's nice to take a break from...
All Ugly Things Fucking Trump and GOP Cult-Like Insanity.


OK, that's all I really wanted to say. My intention is to update the blog tomorrow night.
******* 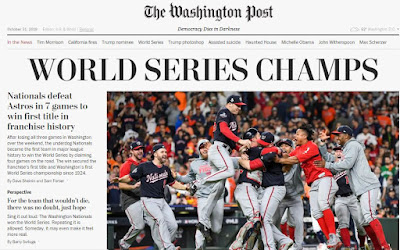 Washington Post online headline late last night.
The Washington Nationals won the 2019 World Series!
The Nats defeated the Houston Astros 6 to 2 in Game 7 of the series -- thus winning the title for the first time in the franchise's history (or rather, it's current D.C. incarnation). It is also the first World Series win for Washington, D.C., since 1924. 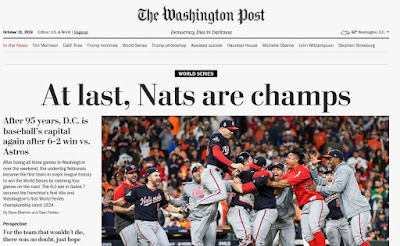 Another Washington Post online headline late last night.
I just wanted to note this.
Today is a gloomy, rainy, rather mild (70F / dew point 67F), and potentially stormy day ahead of a strong cold frontal passage later tonight and much cooler temperatures. I'll try to post a new entry tonight.
End of Update and of Entry