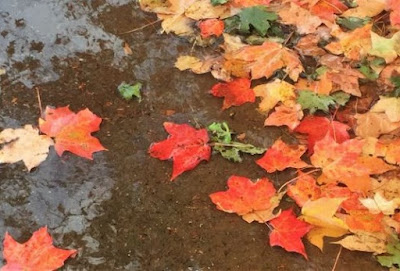 
The remnants of Tropical Storm Nestor (Nestor??) -- itself more of a hybrid tropical/subtropical system that never got to hurricane strength -- are pushing across the eastern United States. Nestor made "landfall" -- truthfully, it was never really a bona fide system, but NHC named it -- on the Florida panhandle on Friday, and the system has transitioned to an extratropical low. 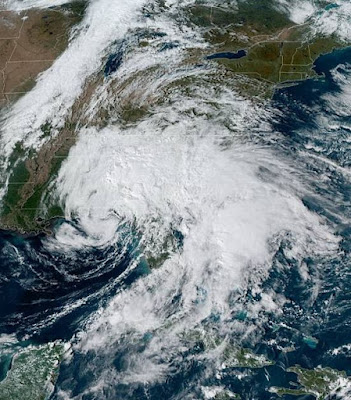 
As the surface weather map below shows, the existence of a cold and warm front associated with the low tells you that Nestor is no longer tropical ("barotropic") but rather extratropical ("baroclinic") -- although there can be hybrid and "sub-tropical" systems. 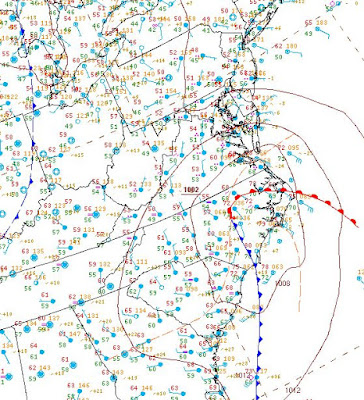 
The high-resolution NAM model seems to have performed best in predicting this system, which has already dropped 3/4 to 1 inch of rain on the D.C. area, while the operational GFS underplayed it by having the system's precipitation shield remaining more compact as the low slipped off the Outer Banks.
Some additional radar imagery, first from the wee hours of this morning …


And from a short time ago …


Sterling (LWX) underplayed the system while NHC spent too much time treating it like a tropical one -- with that frickin' "cone of uncertainty" suppressed so far to the south that it appeared we would get zilch in terms of rainfall. Of course, that's not specifically NHC's purview in a case where the system has transitioned and opened up. 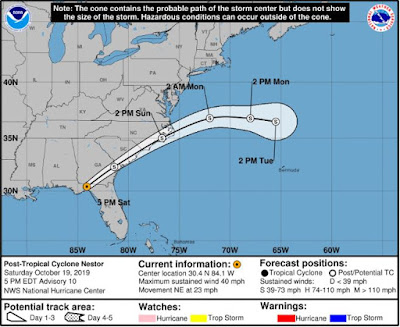 
The rainfall shield is significantly farther north than the GFS indicated -- or, for that matter, NCEP/WPC advertised in its QPF maps -- covering all of New Jersey and reaching well up into southern New England.


Anyway, all that aside, the good news is that we are getting a very rainy day because -- last week's rainfall notwithstanding -- we had fallen into a moderate-to-severe drought following three months of nearly no rainfall. Maybe this can salvage the fall colors on the trees, since up until now, the greenery was just turned brown. 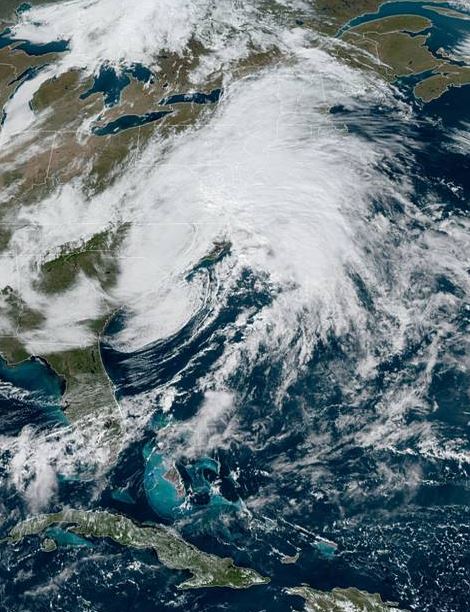 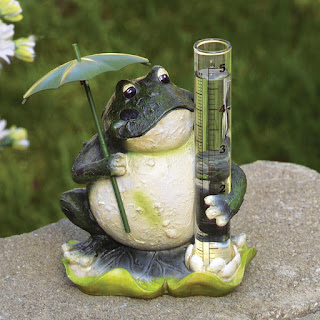 The radar shows the rain should last maybe another hour as the low moves off the Outer Banks and the rainfall with it.

The rest of the day should be cloudy and misty. 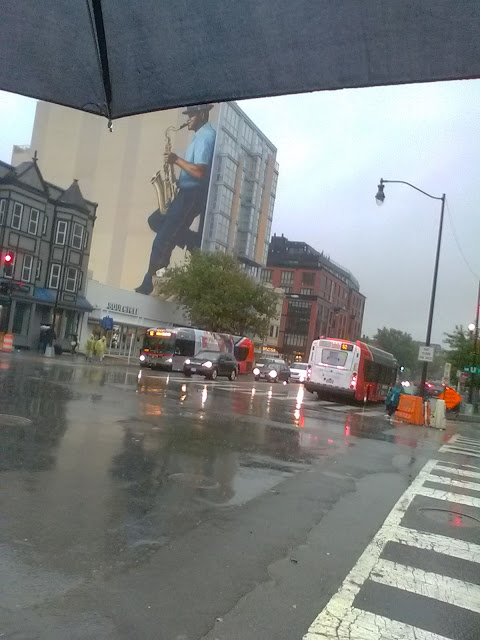 Intersection of U and 14th Street NW, Washington, D.C., rainy day, 12:27 p.m. Oct 16, 2019
I took this picture last Wednesday -- our previous rainy day. The lovely big wall mural painting of a bus driver mailman playing a saxophone -- which replaced some nasty graffiti that someone had put on the side of that new building -- is probably by that local artist street artist Aniekan Udofia.
*******


OK, that's all for now.
I'm going to make my way outside since today, Sunday, is my general free day, but I'm actually not feeling entirely well. Friday night's doings were way too much (visiting no fewer than five places).
While I slept quite late yesterday and then stayed in last night and watched the Saturday night / wee hours Sunday morning MeTV line up -- only going out to grocery shop and then doing multiple loads of laundry -- even now I don't feel that well, although it's more a digestive issue than a headache.
My tiny apartment is conducive to sleep: Dim, cool, window a/c purring (even if it is chilly out), and a lot of bedding on the floor. Oh, and my fan. But I should get up and get out.
Fred & Doug are away this weekend, so no Sunday night soiree and TV viewing at their place.
Finally … 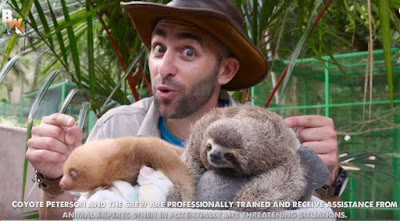 As today is International Sloth Day, I would like to feature this short by YouTube and "Brave Wilderness" personality "Coyote" Peterson on the two-and-three-toed sloths featuring baby ones of each …
*******


OK, that's all for now. My next planned entry will be late Monday or Tuesday.
--Regulus
Posted by Regulus at 2:56 PM