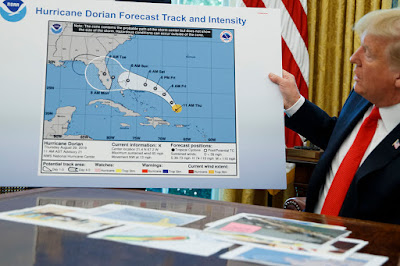 OK, it's time to talk something I really wanted to avoid PRECISELY because it:
(1) Hits close to home for me, and
(2) ONCE AGAIN makes Trump the Eye of a Category 5 Shitstorm in which ALL society does is talk about him -- which is the sum total of what the bloated, grotesque, orange-dyed Il Douche demands -- once you cut through all the bullshit, bluster, and bullying -- he is a husk of a human being, an empty vessel within which is a bottomless, nihilistic void.
This is about, yes, the entire absurdity that began two weeks ago with Trump's initial factually inaccurate but, in all likelihood, innocent mistaken tweet that Alabama was in the path of Hurricane Dorian.
Before continuing, know that: 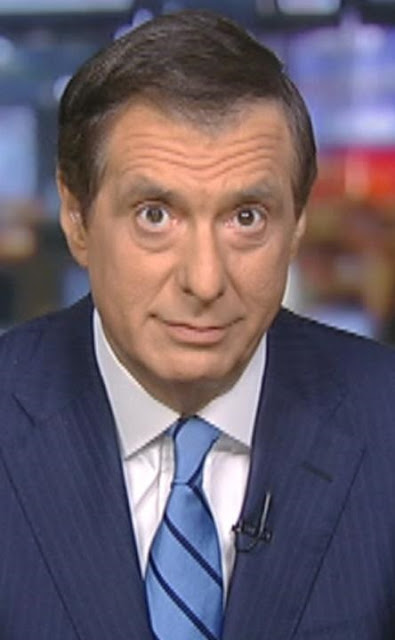 The National Oceanic and Atmospheric Administration (NOAA) is the parent agency of the National Weather Service (NWS), within which is the National Hurricane Center (NHC), and NOAA is housed within the U.S. Department of Commerce.


Continuing: By now, we all know what happened thereafter to include the Trump pathological inability to admit a mistake and the associated torrent of lying that involved days of doubling and tripling down on the original lie.

Added to this waswhat, for Trump, was the excruciating fact that the Birmingham NWSFO had flat-out contradicted him -- that it was an accurate correction is irrelevant to Trump -- and culminating in that cartoonishly crude redrawing with a Sharpie of a then-already-one-week-old National Hurricane Center (NHC) forecast track and uncertainty cone map. 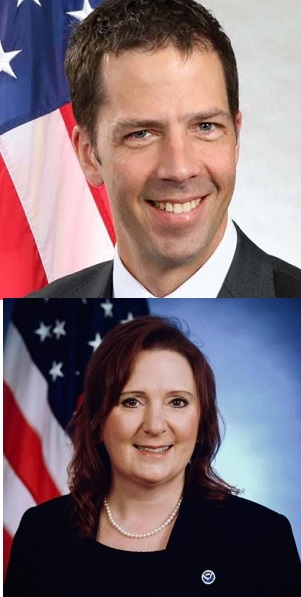 The latest (so far) is that a clusterfuck of NOAA political appointees, i.e., grifting, amoral Trump sock-fluckers to include Acting NOAA Administrator Neil "Jackoff" Jacobs (R - Wanker) and NOAA Communications Director Julie Kay Roberts (R - Texas-to-Tallahassee Twat) -- attempted to shape-shift reality for the benefit of their syphilitically-mad Emperor Wannabe at the expense of the entire NWS and its well-established-and-deserved credibility that allow it to effectively perform the life-saving work it does.


In particular, these ass-hatted ass-wipes threw the entire NWS under the proverbial bus in order to make this sick and deranged Emperor appear "correct" in the face of a factually wrong and stupid statement -- namely, that Alabama was threatened by Hurricane Dorian, when in fact it was not and Trump was wrong.
To its credit, the Washington Post has been all over this like the proverbial cheap suit …

NOAA's support of Trump over its own scientists provokes uproar in weather community.

This entry has almost 3,000 comments.


By late Saturday, the story had further developed -- thanks to Washington Post sleuthing including by Jason Samenow -- and was front page news on the online version and, in all likelihood, the Sunday dead-tree (print) edition, specifically, the discovery by the Washington Post that NOAA leadership had "warned" NWS staff against contradicting the Mad, Naked Emperor:
NOAA staff warned in Sept. 1 directive against contradicting Trump
This entry is nearing 10,000 comments -- again, giving Trump precisely what he wants. 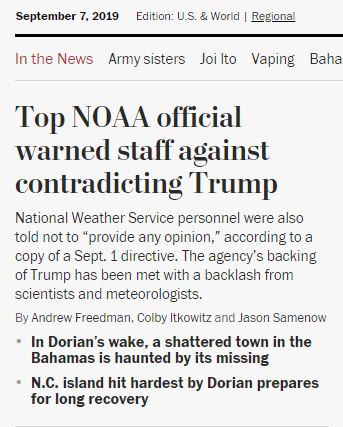 This is a case in which the inherent power of the Federal Government -- in this case, NOAA and even the Department of Commerce -- is brought to bear in order to make the naked, grotesque Emperor appear as though he is arrayed in regal finery. (True, it isn't as blatant and abusive at the Justice Department going after those auto companies for talking to California about fuel economy standards -- another radioactive Trump fixation.) 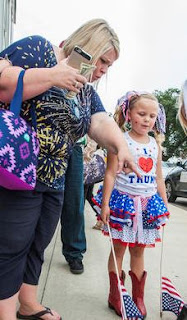 This is being done, of course, only for the sake of the Fox-and-talk-radio-addled white American proletariat that form both his base and his marks -- and his only chance of getting a second term, thanks to the late 18th Century slave state abomination of the Electoral College.

It also shows the sort of gangster-style government that Trump runs -- indeed, the only sort of government he could ever run (facilitated by the cult-like GOP).


As for Trump, to reiterate, this bloated, aged, and physically rotting void of a human being surrounded by a shell that is equal parts vulgarian, huckster, and self-aggrandizing pimp -- he's just happy provided he is the eye of a category 5 shitstorm at all times. 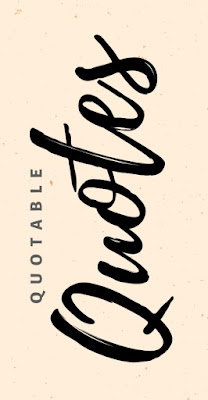 "This looks like classic politically motivated obfuscation to justify inaccurate statements made by the boss. It is truly sad to see political appointees undermining the superb, lifesaving work of NOAA’s talented and dedicated career servant,"


"Perhaps the darkest day ever for leadership. Don’t know how they will ever look their workforce in the eye again. Moral cowardice," he tweeted.
-- David Titley, former NOAA Chief Operating Officer of NOAA under President Barack Obama.
My own view: These people are amoral pieces of shit, so it means zilch to them. Just another day of moral depravity and ethical criminality. 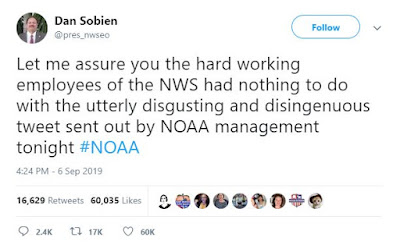 "I have never been so embarrassed by NOAA. What they did is just disgusting... Let me assure you the hard working employees of the NWS had nothing to do with the utterly disgusting and disingenuous tweet sent out by NOAA management tonight."
-- Dan Sobien, President of the National Weather Service’s labor union, on Twitter on Friday. 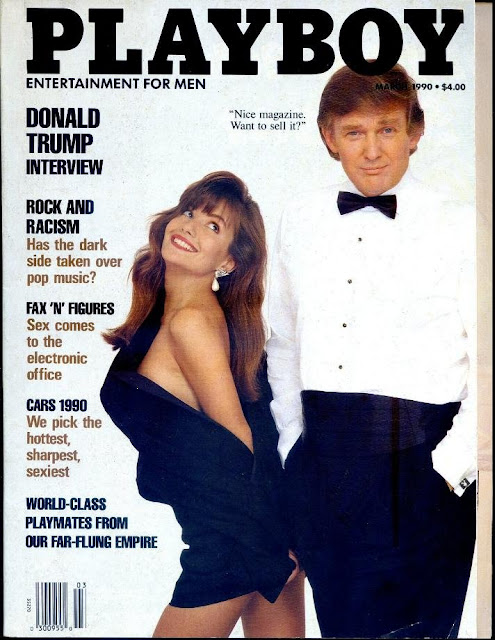 And let's conclude with the following Business Insider piece (link embedded): 'He's losing his s---': Trump's advisers are increasingly worried about his mental state following days of erratic behavior.
We know that. The dementia is kicking in and exacerbating the syphilitic brain damage.
Nice leader you got there, Republicans. I know you're very proud. We know: Something about "owning the libs" and plastic straws and Hillary's lesbian email server.
******* 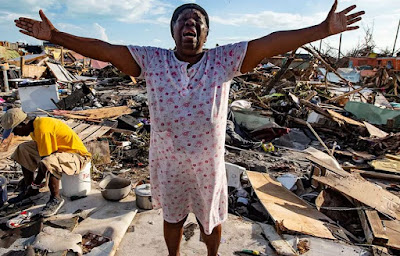 Aliana Alexis stands where her home once was amid the destruction from Hurricane Dorian, Marsh Harbour, Great Abaco Island, Bahamas, September 5, 2019. Al Diaz/Miami Herald/Tribune News Service via Getty Images
The death toll in the Bahamas from Hurricane Dorian is officially around 50 -- but it continues to relentlessly climb as more bodies are discovered daily from the wreckage. 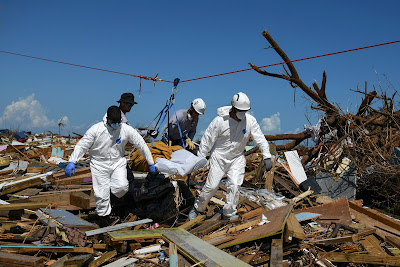 Caption: Personnel from the Royal Bahamas Police Force and a U.S. urban search and rescue team remove a body recovered in a destroyed neighborhood in the wake of Hurricane Dorian in Marsh Harbour, Great Abaco, Bahamas, September 9, 2019. Loren Elliott / Reuters
*******


So, it turns out, not surprisingly, that there is even more to this grotesque parody of the "Sharpie-gate" affair that itself is much more appropriate to an authoritarian regime -- along with some new developments.
I'll start with the latter …


From this CWG entry (link embedded): NOAA's chief scientist will investigate why agency backed Trump over its experts on Dorian, email shows
Excerpt:

[NOAA]'s acting chief scientist said in an email to colleagues Sunday that he is investigating whether the agency’s response to President Trump’s Hurricane Dorian tweets constituted a violation of NOAA policies and ethics. Also on Monday, the director of the National Weather Service broke with NOAA leadership over its handling of Trump’s Dorian tweets and statements.

In an email to NOAA staff that was obtained by The Washington Post, NOAA’s Craig McLean, called the agency’s response “political” and a “danger to public health and safety.”


And the NWS Director came out very publicly for his people including the Birmingham NWSFO -- basically, telling NOAA political leadership to go fuck themselves. 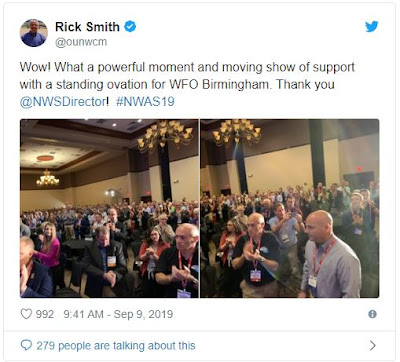 From the same entry: 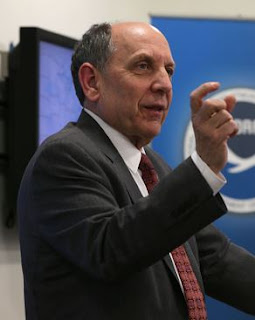 Also on Monday, National Weather Service Director Louis Uccellini got a standing ovation at a major weather industry conference in Huntsville, Ala., when he broke with his bosses at NOAA by enthusiastically backing his agency’s forecasters regarding their performance during Hurricane Dorian.


Uccellini, who has been part of NWS since 1989, praised Birmingham’s NWS office for clarifying that there was no threat to the region and upholding “the integrity of the forecasting process.” 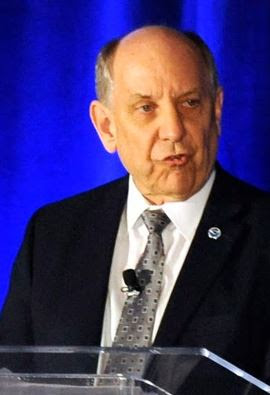 “They did what any office would do,” Uccellini told the crowd of hundreds of meteorologists. “With an emphasis they deemed essential, they shut down what they thought were rumors. They quickly acted to reassure their partners, the media and the public — with strong language — that there was no threat.”


“They did that with one thing in mind: public safety,” Uccellini said. “And they responded not knowing where this information was coming from. Only later, [when] the retweets and the politically based comments came into their office, did they learn the source of this information.”
******* 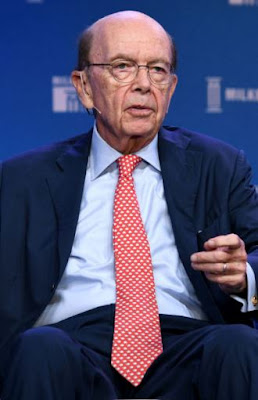 The New York Times did its own sleuthing and discovered that the 800-year old undead zombie of Wilbur Ross -- a sclerotic piece of shit multimillionaire and real-life Montgomery Burns look-a-like who is part of Trump's gangster government Cabinet of grifters, criminals, and kooks -- was the cause of the NOAA statement that was put out by Jacobs and Roberts out of fear for their and/or other appointees' jobs. 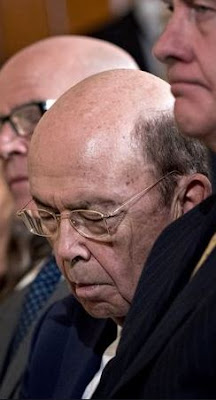 The Secretary of Commerce threatened to fire top employees at the federal scientific agency responsible for weather forecasts last Friday after the agency’s Birmingham office contradicted President Trump’s claim that Hurricane Dorian might hit Alabama, according to three people familiar with the discussion. That threat led to an unusual, unsigned statement later that Friday by the agency, [NOAA], disavowing the National Weather Service’s position that Alabama was not at risk.


The reversal caused widespread anger within the agency and drew accusations from the scientific community that the National Weather Service, which is part of NOAA, had been bent to political purposes. 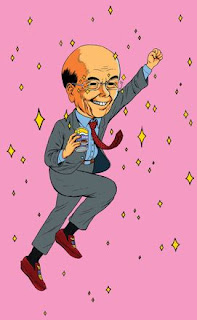 So, there you have it, Gentle Reader: "Sharpie-gate" in all its Trump era, upside down, bizarro-world farcical and altered reality grotesquery.

So, it turns out, going farther down this sordid rabbit hole, we end up -- hardly surprisingly -- in the middle of that Trump cesspool. Alternatively as the old expression goes, the rot, indeed, begins at the head of this toxic mercury-laden fish.

That it, it was Trump himself who demanded -- via his ass-wipe Acting Chief of Staff, Mick Mulvaney -- a man who looks like an aborted chicken fetus -- that NOAA put out that statement.

Here is the (I suspect final) CWG entry on the matter: